Newcastle to Kings Cross
and return
(First Class only)

Poor Jeremy Corbyn. This week he bought a Standard Class ticket on a Virgin train from London to Newcastle without a (free) seat reservation. 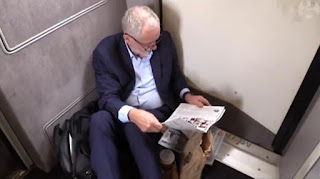 Didn’t he know that he’d have to spend the entire journey sitting on the floor? Or at least long enough to be filmed by a conveniently placed film crew. Now he wants to re-nationalise the railway: that’ll teach ‘em. 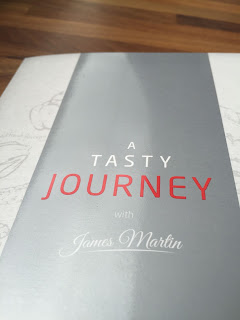 Here’s what he missed. For those who haven’t watched daytime television for the past ten years, James Martin is a celebrity chef. He’s better known as a TV presenter than a cook, and was something of a housewives’ heartthrob until he left his Saturday Kitchen job earlier this year. Quite why he disappeared from our screens I’m not sure: one broken-egg omelette too many, maybe.

Now he’s putting his brand about. There’s a restaurant in a Manchester casino called James Martin Manchester; he makes adverts for Asda; and he certainly appears to be very hands-on with Virgin Trains.

Normally I wouldn’t have reviewed this meal, which I endured a few weeks ago. It was so unbelievably awful that its memory deserves to be buried along with James Martin’s reputation. But thousands of people have to travel by train from our region to London every week; they need to be warned. 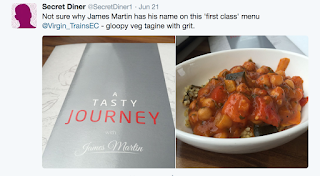 I should have taken the advice of one North East food blogger, who read my tweeted outburst: “gloopy veg tagine with grit” and responded that she was on another Virgin train at the same time, but was foregoing the food, and instead “came prepared with M&S goodies”. Wise old Scran on the Tyne (Lauren Archer). 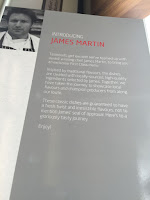 Inside the glossy menu was a picture of the chef looking rugged and a headline: “Introducing James Martin”. The copy wasn’t about him, but his food.

“Tastebuds, get excited!” it said. Mine did their best, helped along by a huge tumbler of warm white wine, dispensed by trolley.

“We’ve teamed up with award-winning chef, James Martin, to bring you an exclusive First Class menu,” it went on. Even the posters on the station platform had promised: First Classier. Clearly this was to be no ordinary train food. 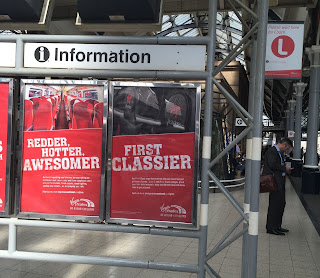 “Inspired by traditional flavours, the dishes are created with locally-sourced, high-quality ingredients selected by James. Together, we have taken the journey to showcase local flavours and champion producers from along our route.”

I wondered which traditional flavours James had selected from our two stops, Darlington and York. Or maybe he’d chosen them from the places we stormed past enroute: a taste of Durham, or a sniff of Northallerton. I was pretty sure there was nothing of culinary note in Peterborough, but maybe he’d uncovered something spicy in Doncaster. 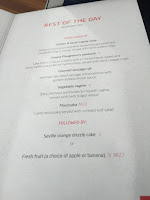 You can imagine my disappointment, then, when I discovered that the menu had missed the point. My “choice” of five items were: a chicken & bacon wrap (British); Cheese ploughman’s sandwich (Lake District cheddar); vegetable tagine or Moussaka (maybe there’s a large Moroccan and Greek population in Darlington?). Finally, I spotted one local speciality: “Yorkshire rare-breed gourmet sausage roll”. 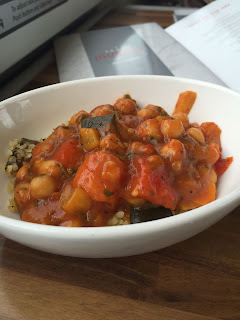 Sadly, they were all out of sausage rolls.  I made do with the vegetable tagine. Spicy chickpea and butternut squash (not exactly local ingredients), served with herb bulgur wheat. It was indeed gloopy with grit. I could have added the words “weirdly orange”. The bulgur wheat was almost raw.

Suddenly up popped another tweet: “On board @Virgin_TrainsEC today!” It was @JamesMartinChef himself. Not on my train, but another. So I told him what I thought of his tagine. And, quick as a flash, he replied.

Well, not the great man, but someone called @Virgin_TrainsEC. “Really sorry you feel that way, have you mentioned the issue to a member of the team?”

I said: “Would rather mention it to the feast's creator than bother the innocent, nice people serving it up” (the service was really rather good).

Back came the reply: “They’ll be more than happy to see what the issue is and get you something fresh”

“Thanks but it's actually my job to eat raw-ish bulgur wheat & orange gloop. Look fwd to rest of James Martin’s menu on my return trip”. 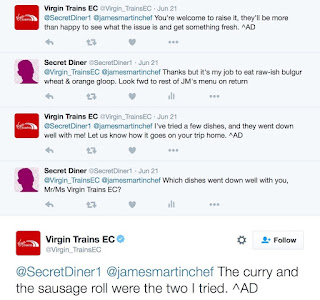 At which point @Virgin_TrainsEC got quite chatty: “I've tried a few dishes, and they went down well with me!”

“Which dishes went down well with you, Mr/Ms Virgin Trains EC?"

“The curry and the sausage roll were the two I tried.”

The curry wasn’t on today’s menu. Maybe next time, I said, adding: Which 'local flavours along the route' does this curry 'showcase'? 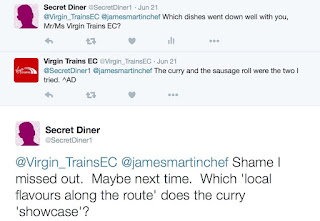 I never got an answer. However, by this time, others were chiming in.

“I had a James Martin tagine last week. Awful.” said one; “The whole menu is poor in my humble opinion,” said another; “I'm guessing James Martin received a substantial fee to put his name to that menu,” observed a third. Quite.

Some of us remember the old days of the restaurant car and the silver service, the poached salmon and garden peas and boiled potatoes that fell off the waiter’s spoon as we lurched round the bend.

I know those days are long gone. But I resent being sold a load of PR hype when, actually, Virgin are just trying to give passengers, who have paid hundreds of pounds to travel with them, the bare minimum to avoid starvation. Or so it seems. No way was this a “Tasty Journey”.

I did try the rest of the menu on the return trip. Not the sausage roll, for the man next to me had one that looked ever so dry – a gourmet sausage roll in need of a gourmet. So I went for the moussaka. 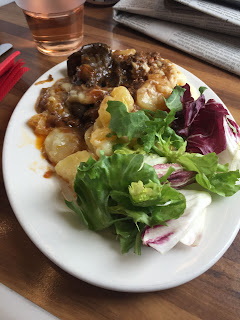 Alongside some undressed salad leaves, it was a dismembered dish, the potato, bechamel, minced lamb and aubergine assembled together on the plate.  I guess James Martin would call it 'deconstructed'.

At least the aubergine was tender.  But the sauce tasted of something foreign. Not something Greek, something out of place in a moussaka. I couldn’t put my finger on it: was it some kind of preservative? Or was it a particularly strong type of gravy granule? It vaguely reminded me of the sauce in a Marks and Spencer lasagne from decades ago, before they improved the recipe. So I ordered a second tumbler of warm wine, to take the taste away, and dreamt of M&S goodies.