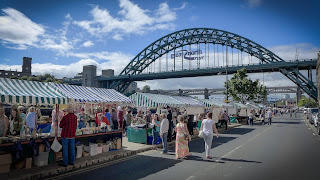 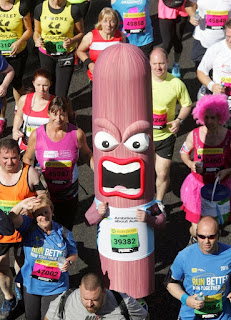 If you are one of the 57,000 brave souls who will be running, jogging or perhaps just staggering from Newcastle to South Shields on the Great North Run tomorrow, then I salute you. I’d love to be there with you, bounding across the Tyne Bridge dressed as a hot dog, revelling in all that sweat and Lycra, but I’ve promised to take Mrs Diner back to Greece.

Well, not Greece itself, but a little van that sells Greek gyros. It’s just below the bridge, in Newcastle’s Quayside market that appears every Sunday morning. This row of stalls and vehicles is one of the culinary delights of the City, turning a simple stroll beside the river into a brunch of champions.

Great North Runners: I promise we’ll be thinking of you as we munch away below your jogging feet. We might even manage a wave or two. But don’t look down or you might just smell the food, give up running and come and join us.


I vaguely, and perhaps not completely accurately, remember a time when there wasn’t a great deal more to this market than cheap socks and batteries, neither of which lasted more than about five minutes. There were a few hangover-curing burgers that had spent who knows how long swimming around in grease, and the odd porky bap.

Happily the products on sale, and the food, are now a great deal more exciting. I love the novelty of eating street food on an actual street, rather than in one of the growing number of restaurants that claim to serve it in their dining rooms. That’s why a few weeks ago, blessed with a warm blue morning, Mrs Diner and I joined the throng. 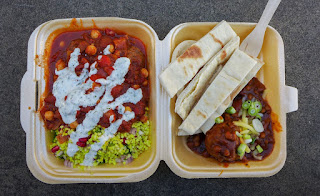 We began our prandial perambulation with the meatballs at Hani’s Kitchen. An order of Moroccan lamb koftas earned us a punnet filled with a perky bulgur wheat and pomegranate salad, some pitta bread and a nicely spiced chickpea stew in which bobbed three well-seasoned and full-flavoured meatballs. A cracking start for just £3.50. We were given a taster of smoked Boston BBQ meatballs that were less impressive. Go for the moreishly Moorish option.

I’m not sure how much space there is left for new burger operators in Newcastle – I questioned this only the other week in my review of Five Guys – but that hasn’t stopped the friendly folk behind The Grind setting up stall. In fact, quite a few readers have recommended them. 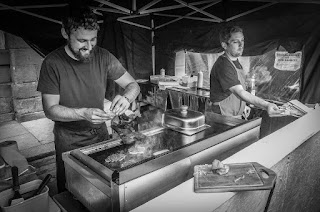 I freely admit that their standard double burger (£4) is a fine piece of work. Rather than pre-shaping their patties they squish them down directly onto the hotplate, which gives them a lovely char. Despite cooking them through (boo!), the burger is a juicy specimen, helped by quickly steaming the bun, meat and cheese together at the end of the cook. I was a bit surprised and even disappointed that they didn’t know what cut of meat they were using, but they advised me that it had 20% fat content, which is perfect for burgers, so (almost) fair enough. They’re looking to find a permanent home soon; watch out for that. The longest queue was for the Greek gyros van and, having tasted one, I can see why. 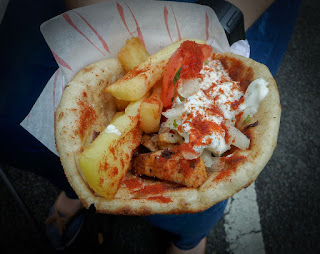 A fluffy but flavoursome pita (are they cooked with lard I wonder?) was wrapped around deliciously seasoned chicken with plenty of crisply charred bits, fresh salad, tsatsiki and a few chips. One bite and I was back in Symi harbour, looking out across the Aegean Sea to Turkey. Except that I was actually looking across the Tyne to The Sage and The Baltic. Whatever: all you need to know is that this was a fine gyros indeed.

After all that meat, we craved a bit of healthy eating. I’ve tended not to be very generous towards vegan food, mainly because, unfortunately, I’ve found it often accompanies incompetent cooking. However, the chocolate mousse cake from a stall named “Raw and Vegan Delight” swiftly changed my prejudices. 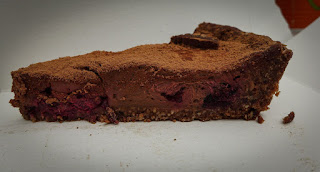 With a crunchy coconut base and a raw cacao filling spiked with raspberries, this was as fine a slice of cake (£3.50) as I’ve had in some time, squaring the circle of rich and decadent versus light and actually good for you. Well, I assume it’s good for you. Honestly, if all vegan food was cooked as well as this… well, I’ll just leave that thought hanging. 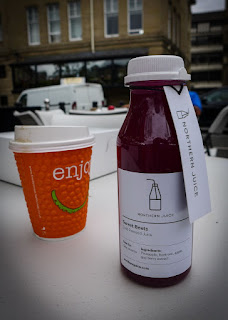 All of this was washed down with a latte from the back of a tiny van (£2) which still managed to be way better than anything served by that lot from Seattle, and some delicious cold-pressed beetroot and pineapple juice (£3) from Hexham-based Northern Juice. Seek them out. 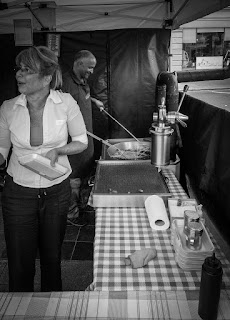 On the way out we grabbed some churros from a van because… well, who needs a reason to order churros? Not me. 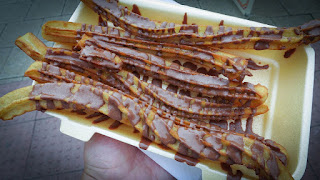 They were crisp, doughy, chocolatey and good. But you already knew that.

Eventually, we had to admit defeat. Otherwise we could have tried Mexican tacos, Venezuelan stews or some rather fun looking home-style Japanese dishes. We could have wandered down to the far end of the market to see what Riley’s Fish Shack was cooking up. 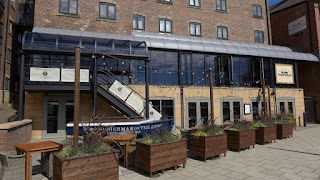 Or we could even have taken a seat at the newly opened Jolly Fisherman (yes - it’s on my list for review).

Part of what made our visit so enjoyable, and the thing that is missing when restaurants claim to be “inspired by street food”, is the chance to talk to the actual cooks, to find out what they’re about and why they’re doing it. Everyone we spoke to was, without fail, absolutely lovely. I confess that nothing we consumed could count as preparation for a half marathon.

But if the Metros are running as well as the athletes, you could sprint through the race tomorrow and still get back in time to hit the market for a late lunch. I can think of no better way to replace all those hard-lost calories.