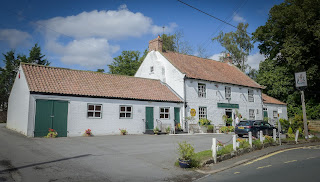 
What a difference a few miles make, I thought, as we pulled off the A19 and into the village of Crathorne.

Just behind us was the industrial thrum of Middlesbrough and the Tees estuary, all belching chimneys and iconic chemical plants. In front of us was the very essence of a pretty village. Everything was in bloom. And, at the heart of it, a fine-looking whitewashed lump of country pub, the Crathorne Arms.

In fact, to just call this place a pub would be to undersell its charms. It’s actually part of North East culinary history.
Barbara and Eugene McCoy once had something of a restaurant empire, with the Cleveland Tontine at its beating heart from 1976 until Eugene’s involvement there ceased in 2013.

The marvellously eccentric Tontine had become the North East’s destination place soon after Egon Ronay declared it Restaurant of the Year. For nearly forty years the three McCoy brothers ran it and, after Tom and Peter left, Eugene carried on, also opening and then closing the (in my opinion overfussy and overpriced) rooftop restaurant at the Baltic, and later McCoy’s Brasserie in Newcastle. That was then. This is now, and here he is, very much back in business, living in and running The Crathorne Arms. 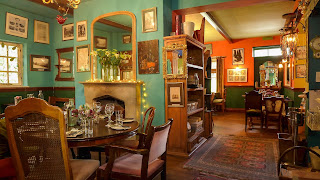 It’s less than a dozen miles south of Middlesbrough, but, on a blazing sunny afternoon, it felt like a little corner of France. The garden outside was a riot of lavender, fennel and chocolate mint, inside the restaurant held a quirky cornucopia of the owners’ personal effects, everything mismatched and utterly charming. 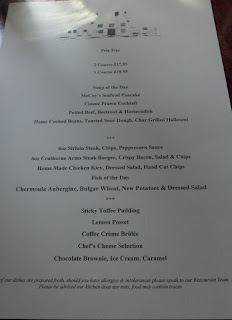 At lunchtime the menu offers pub classics with the odd flash of creativity thrown in for good measure, priced at £19.95 for three courses. I could have happily ordered anything and everything from the list. Meanwhile our confident waitress reeled off soup and fish specials with professional ease. 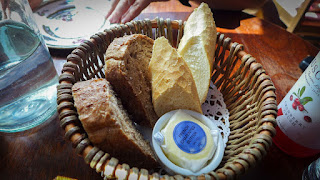 My decision process was interrupted by a basket of bread so crusty and light it was just begging me to pile it high with superb Charentes butter. So I obliged, and could easily have demolished a second basket if Mrs Diner hadn’t stopped me with one of those looks and forced me to order. 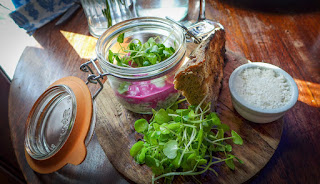 For my starter, I settled on what sounded like a simple dish of potted beef. It was food theatre – a wisp of smoke emerged from its Kilner jar as I opened it. Inside, feather-light concoctions of beetroot and horseradish gave way to thumpingly good beef cheek, punctuated by neat shards of cornichons. All of this was to be slathered onto excellent sourdough toast along with lashings of sensational beef dripping butter. Yes, that’s right: beef dripping butter. Did three words ever sound so good together? Let’s do it just one more time, shall we? Beef. Dripping. Butter. You’re welcome. 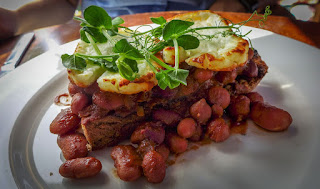 Mrs Diner’s home-cooked beans on toast was another fine starter, if not quite so dramatic. A variety of beans made for textural interest, while the halloumi perched on top was saltily good. 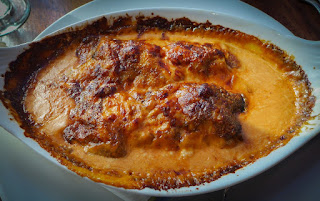 Seafood pancakes was always a McCoy signature dish, so I felt duty bound to sample it again. A couple of veil-like crepes were so thin they were scarcely there. Inside, prawn, salmon and possibly coley were nicely cooked and properly seasoned, while the whole thing was slathered generously in a fish stock and cream sauce to which a gazillion shells and heads had given their goodness. 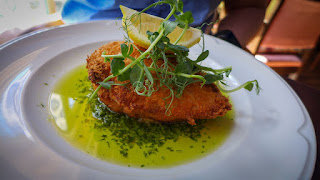 Mrs Diner’s Chicken Kiev was a reminder of why this dish was so popular in the olden days, long before its good name was ruined by the grot that lurks in the freezer aisle. The garlic butter fairly hummed, though tamed slightly by ample fresh parsley, while the panko breadcrumbs that coated the bone-in breast brought things slightly up to date. 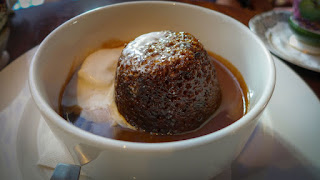 Both a sticky toffee pudding and a lemon posset (another Tontine memory) were without flaw, especially the latter. 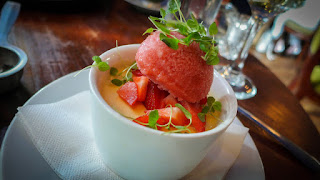 The balance of zing and sweetness was a joy, while the just-set texture was just so.

As we asked for the bill I was already checking my diary to see when we might return for dinner. The man actually producing these dishes of unerring deliciousness is head chef David Henry, who previously worked at Rockcliffe Hall under Kenny Atkinson and was a semi-finalist in Masterchef: The Professionals a few years back. His appointment here is yet more evidence of the McCoys’ excellent taste and judgement. The total consistency of everything that we ate suggests a well-trained, organised and happy team. 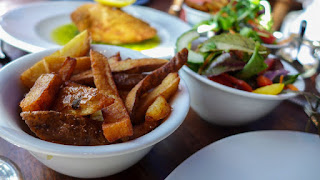 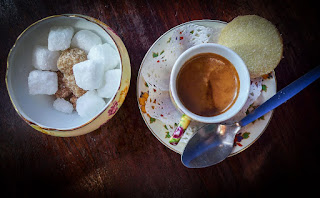 Perhaps most impressive of all was the attention to detail. From that delicious butter, to the bowls of perfect chips; from a well dressed salad to properly made espresso and a wine list with serious choice, including some serious choices by the glass, this is a place that oozes quality and assurance. 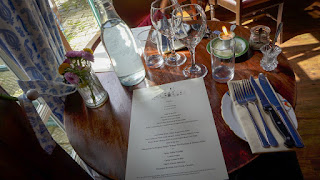 The fact that The Crathorne Arms is also a real pub with good beers on tap is just the icing on the cake. I wonder if the locals know just how lucky they are? For the rest of us, it’s worth travelling some distance for food like this, where flavour and generosity are given top billing. Based on this experience, I can’t recommend it enough. Chapeau!