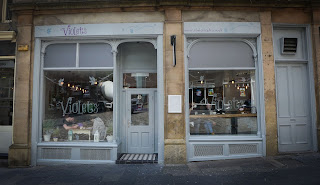 
Depending on when the 2017 guide gets leaked, Kenny Atkinson should find out in a few days whether his restaurant House of Tides has retained its Michelin star for another year. I fully expect it to.

enjoyed another stellar meal there back in June, fully justifying the 6 stars I had given it in my previous review: Lindisfarne oyster, tiny cones of chicken liver, beetroot and smoked eel meringues before the meal; scallop, halibut, 40-day aged beef and apple and blackberries during; and a big contented grin all the way home. 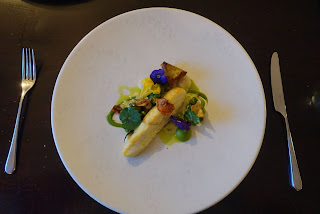 House of Tides has confidently settled into its stride as Newcastle’s finest dining establishment. Long may it reign. However, it’s not all about the flagship for the Atkinson family these days.

This summer wife Abbie opened up her own café called Violets. The word café can conjure grim visions of over-brewed tea, greasy breakfasts and paperweight scones. As you step through the door into this picture of Instagram-bait cuteness, you know you’re in for a very different experience. 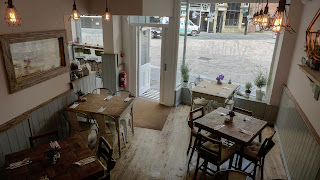 I visited twice, once just after my last House of Tides meal, for brunch, the other more recently, for a sedate and savoury afternoon tea. We took a table in the upper section of the room on the first occasion and snared a premium window table on the other.

On a toasty Saturday afternoon the latter was a fine perch from which to admire some of Newcastle’s hen and stag scene assembling outside. I scarcely have words to describe what my friend and I gawped at as they passed us by – mounds of gaping flab rolling off to the fleshpots, flimsy nurses and animal costumes contrasting with the delicate floral prettiness of the Atkinson crockery that was delivering us a really special afternoon tea.

It was all very, very nice with occasional forays into the land of flat-out deliciousness. 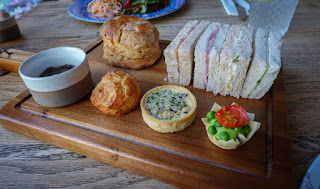 A tiny filo basket held a goblin-green pea mousse, with a few actual peas dotted on top for good measure. It was a fitting requiem for one of summer’s great treats. Alongside, a quiche sported a wonderfully short pastry that would have them all cooing appreciation in the Bake Off tent. Then a gougère-type contraption was light as a whisper, but filled with a richly truffled cream. Slightly less fabulous were a cheese scone that could have used the thwack of something more mature, and a line-up of pleasantly squishy sarnies that needed less butter and crème fraîche and rather more meat and salmon. 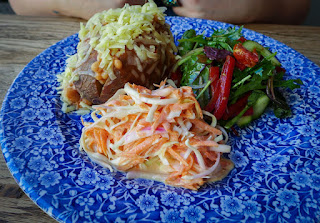 I couldn’t help wondering whether baked potatoes were a bit out of step with the gentle creativity of everything else on the menu. Furthermore, £7.50 is a bit steep - vertical almost - for a spud with beans and cheese. My friend, who appreciates life’s simpler pleasures, had no such qualms, and duly ordered one. It was - well, what I can say? It was a baked potato. The side salad was spruced up by the addition of dill. 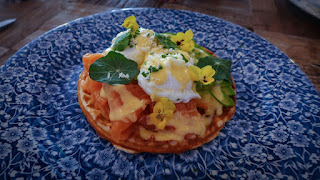 The day Mrs Diner and I brunched we certainly found plenty to admire. Hollandaise sauce is one of those building blocks that reveals if a kitchen has the basics in order. Violets very much does. Mrs Diner’s poached eggs wore it like a velvety cloak, the whole assembly perching on fine buttermilk waffles. 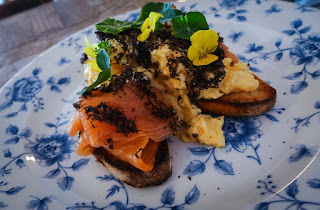 Elsewhere, good sourdough bore a generous portion of soft scrambled eggs over which a black blizzard of summer truffle and some nasturtiums shouted “Ooh look, fancy!” I think the truffles were from the same source as the ones we’d enjoyed on our House of Tides beef the previous night. 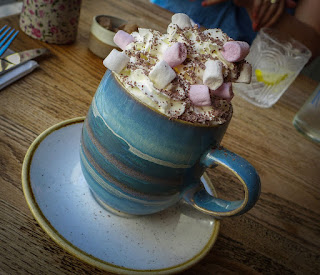 A hot chocolate, hewn from the fine Belgian stuff that Callebaut produces, was pimped with thick cream and who knows how many marshmallows.

Coffees were very well made too. They have a nice range of soft drinks, including Fentiman’s beguiling rose lemonade. 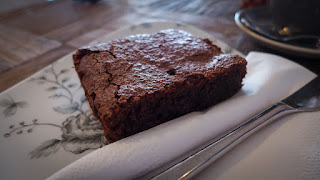 Violets certainly isn’t cheap, but their cakes and pastries are bang-on. They bake a different range daily. Salted caramel brownies were as good as those words sound, all rich squishyness. 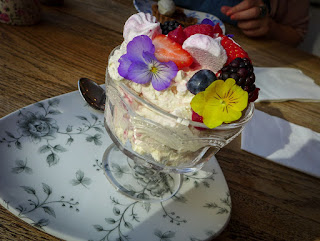 An Eton mess was relatively tidy, admirably including both chewy and crisp meringues. You get the picture, I hope? That’s right: it’s all really good.

What’s more, it’s very competently served in a lovely room, exhibiting a shabbier chic version of the excellent taste that was employed in the fit-out of House of Tides. The palette is straight out of the Farrow and Ball catalogue, while bare wood this and antique that give character.

The music was good too. I like a bit of The Strokes with my afternoon tea. Expect to pay £10-12 for the brunch dishes and a little more for either the sweet or savoury afternoon tea. The full afternoon Monty weighs in at £25. 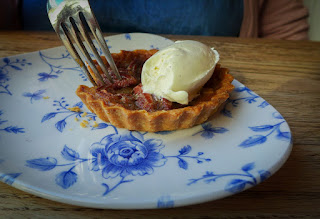 Violets is named after Abbie Atkinson’s late gran. I’ve no idea what her baking was like, but this place would be a fitting tribute to anyone’s. I’d rather hoped there might have been a few more substantial lunch dishes, but they’ve clearly decided to be the best café they can be, and in that regard Violet’s is a runaway success.

Once again the Atkinsons deserve credit for raising the bar and opening up a place that is very much worth a detour. I hear that from time to time Chef Kenny himself can be spotted in Violets’ kitchen. If you want a Michelin star chef cooking your baked spud, you know where to go!