The Jolly Fisherman on the Quay 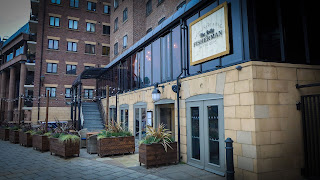 
“Is that it?” I stammered, scanning the room for a chalkboard of specials.

“Yes sir, that’s our menu for this evening.”

I frowned at the printed A4 sheet in my hand. At least it wouldn’t take long to decide what to order. 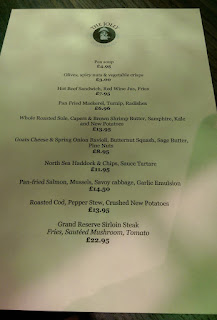 I tend not to go into very much detail about the menus of restaurants I cover. It’s an omission I need to remedy. A menu is more than a list of items that make you less hungry. It’s a statement of intent, a declaration of ambition. Are there any unusual cuts of meat or fish being offered? Is there a knowing mention of some groovily on-trend cooking technique? Does the farmer get a shout-out? What’s happening for the vegetarians? All of this stuff matters, and for people like me who spend a lot of time scrutinising what restaurants do, it matters a lot. Menus are important.
Which is precisely why writing this review is a bit tricky. Most of what Mrs Diner and I ate was cooked accurately enough, and we were well attended to. It’s just that the list from which we chose our weeknight dinner was abrupt to the point of rudeness.

If you don’t count “olives, spicy nuts and vegetable crisps” as a starter - and I don’t - then there were just three to choose from, including a hot beef sandwich, which isn’t really a starter either. There were 6 main courses, including fish and chips and a steak. There was one dish on each course that might be suitable for visiting vegetarians, provided they are big fans of peas and butternut squash.

This was all very disappointing, given that this is the new sister operation of the excellent Jolly Fisherman in Craster, which comfortably earned four stars from me last year for its fine seafood and good cooking.

The blurb for their venture on Newcastle’s Quayside speaks of platters of fruits de mer, crab thermidor, bouillabaisse and game for the carnivores. None of this appeared on our menu. But enough about the meal I really wanted, let me tell you about the one we had. 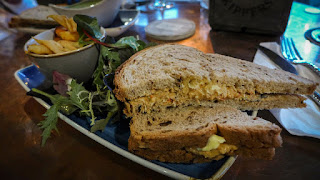 I was determined to eat something involving crab, so I asked if they would sort me out with an off-menu crab sandwich, the famed dish that Northumberland’s walkers will go an extra mile for in Craster. The filling, in which delicate white meat had been bound by the delicious saline thump of the brown, made me glad to have been so impertinent. The fact that the bread was dry enough to have almost started to curl at the edges, less so. 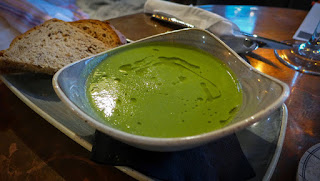 Mrs Diner’s pea soup was neatly seasoned, perfectly smooth and ripe with flavour. However, more of that same dud bread on the side took the sheen off things. 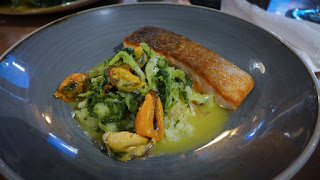 Salmon is scarcely the most imaginative piece of fish to serve, but it was, it must be said, perfectly cooked. You may think that’s just subjective, so let’s be as precise as the chef who prepared it: the skin was gloriously crisped whilst the innards had received just enough heat (but no more) for the flakes to part company under the light pressure of a fork. Mussels, savoy cabbage and a buttery sauce rounded out a solid plate of food. 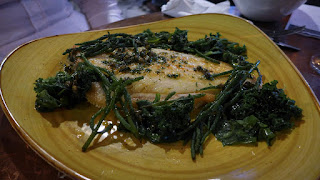 Mrs Diner’s sole was a particularly bony specimen, but her reward for persistence was some more well-timed cooking. The classic accompaniment of caper and brown shrimp butter was a winner, although whole clods of samphire weren’t much fun: the thickest parts were stalkily inedible. This is laziness on the part of the kitchen; only the tender tips of this should be served. 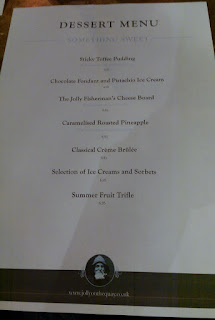 After the drought of savoury dishes we were hit by a veritable deluge of sweet options, with no fewer than six to choose from, plus a cheese board. 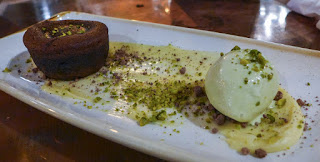 A chocolate fondant was perfectly gooey inside, although lacked the real thwack of good cocoa. 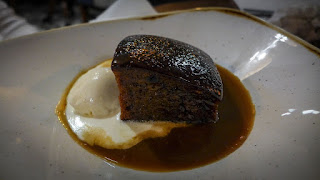 A sticky toffee pud was - and I’ve been eating enough of these lately to have plenty of context for this comment - not great. The sponge was too light, lacking any clear date content.

The wine list on the other hand is excellent, with seven whites and eight reds available by the glass, and - praise be! – their vintages listed. I enjoyed a flinty Petit Chablis, which anyone who claims not to like Chardonnay would do well to try, and a delicious sweet red from Roussillon with my dessert.

Service was unobtrusive but friendly, although when trying to book on two occasions the phone had gone unanswered, which isn’t ideal.

The chef here is Adam Hegarty, who worked for Terry Laybourne and David Kennedy before head chef postings at the Baltic’s Six and Darlington’s Truffle. I didn’t see him on the night of our visit, some four weeks after they opened their doors, and I wonder if that explains the limited menu. Something has to. No crab, no lobster, no razor clams, no langoustines, no mullet, no turbot, no halibut – what kind of a Jolly Fisherman is this?

When the bill - £78 - was brought out in an oyster shell, it just served to remind me of yet another thing that should have been on that sparse, inadequate menu. I’ll be keeping an eye on The Jolly’s website to see if its offering gets more interesting. If it doesn’t, then I fear for its future, for this place is just a stone’s throw from the wonderful Riley’s Fish Shack which has more than enough seafood to satisfy any fishophile. But if it does improve, let me know and I’ll certainly be back. Promise.