When a restaurant has been packing in the customers for as long as Blackfriars, I reckon it must be doing something right. I last ate here some five years ago and it was an unhappy experience that left it languishing with just one star. So why did I return? In a word: Hinnies.

That’s the name of the Blackfriars’ new sister restaurant in Whitley Bay which, when we visited back in June, was bang on form, churning out delicious plates of sensibly put-together dishes at bargain-basement prices. I awarded it four shiny stars and the experience jarred so thoroughly with my hazy recollections of Blackfriars that I resolved to give the mother ship another voyage. And so here we are.
Blackfriars is an old restaurant in at least a couple of senses. It opened, in its current form, in 2001. Fifteen years of trading in this most cut-throat and capricious of industries is no mean feat, inviting the liberal application of words like “stalwart” and “veteran”. The Newcastle restaurant scene has exploded with competition over the past decade: Blackfriars is a survivor.

The building itself is more venerable yet, being the banqueting hall where Edward III received John Balliol in 1334. This makes for an interior that, whilst a bit on the dark and heavy side, makes a change from the air-duct and filament light bulb fixation of almost every contemporary restaurant fit-out. 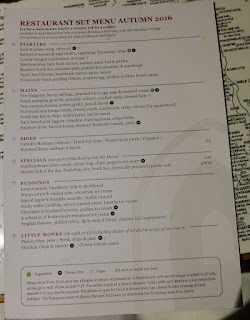 In order to get a real sense of what head chef Chris Wardale and his crew were up to, we gave both menus a whirl: the set menu at three courses for £18, and the à la carte, which has starters from £5 to £13, and mains up to £26. Before all that, some good bread that tasted like it had been made in-house. 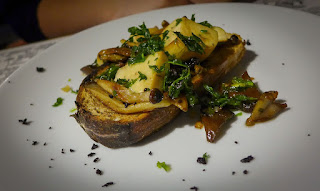 From the set menu, foraged mushrooms on toast was an excellent rendition of a bistro standard. The fungi, of which there was a good variety, had spent just long enough in a pan of foaming butter to take on lovely nutty and roasted flavours. The juices soaked into the wodge of toast, while crisped parsley prevented the whole thing becoming a study in beige. 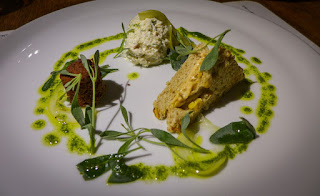 My own starter of crab three ways, ordered from the posh list, was more intricate but no less delicious. A canapé-sized sarnie of smoked crab sat alongside spanking fresh white meat mayo and a bon-bon of the brown, the whole thing lubricated by dill oil and thoughtfully garnished with sea purslane and wafer-thin slices of preserved lemon. This presentation had just the right amount of the right type of detail: it made a quality ingredient shine.

I noted that Blackfriars’ drinks list is a good one, with twelve wines available by the glass, plus a range of fine beers. For those with an interest in such things, there’s also a rather decent range of malts. A nicely restrained French Sauvignon lacked the brash abrasiveness of some of its new-world brethren, and was just the job with that crab. An Argentinean Shiraz was equally enjoyable, picked out to partner a venison Wellington. That dish had seen the kitchen not quite manage to square the circle of getting crisp pastry around a small, but still rare piece of meat. Perhaps the lack of crèpe to separate the meat from the pastry was the problem. Pallid pastry aside, the meat itself had good flavour and the mushroom duxelles and jus were both well performed. 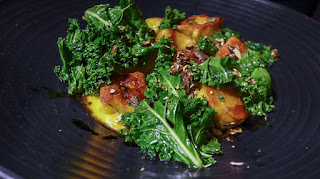 Sadly, there isn’t anything similarly generous to say about Mrs Diner’s roast pumpkin gnocchi, which were grimly inept and flavourless pellets. They would have made better musket ammo than food. Their pumpkin velouté was thin and a bit mean too. Let’s move on swiftly. 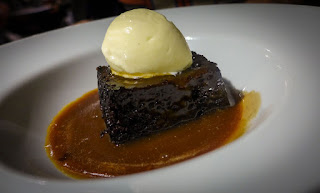 Puddings were competent. A sticky toffee pud arrived with banana rather than the requested vanilla ice cream, which was quickly and graciously remedied. The thing itself lacked a bit of body, the sponge too light to call itself a proper STP. 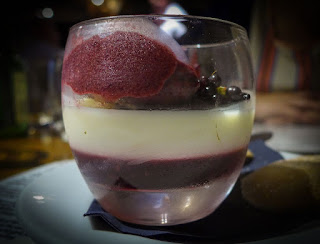 My lemon posset was nicely set, though, with a pleasant balance between sugar sweetness and citric tang. We paid just over £80 for three courses each with a couple of glasses of wine.

I can only assume that Blackfriars were having a right stinker on the night of my visit all those years ago. It was much better this time, and the kitchen showed it is capable of outbursts of excellence. It’s just a shame they couldn’t sustain it throughout our meal. My three stars recommends it, though – taken as a whole, it was enjoyable.

I was also left with the impression that Blackfriars’ USP - the formidable building itself - is a bit of medieval albatross around their neck. It’s just a bit glum and heavy in there, and it’s certainly overdue for an update – if I thought the décor was tired five years ago, it’s now positively comatose. 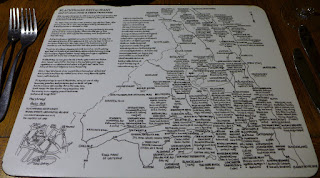 Our placemats listed a huge number of regional food producers, alongside, oddly, the contact details of One North East. It has been more than 6 years since the coalition government announced, in their infinite wisdom, to abolish it. Time to find a new placemat sponsor, I feel.