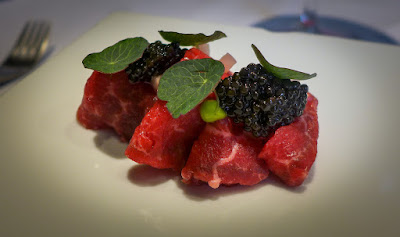 While other more erudite writers are employed to take stock of the tectonic shifts and epochal upheavals in the wider world, my task is rather simpler and happier. I'm aware that I've been saying this for each of the past few years, but that that doesn't make it any less true now: there has never been a better time to eat out in the North East.

We are currently blessed by impressive quality at every level, from the street to the starchily-clothed, and an increasingly enthusiastic and knowledgeable restaurant-going public is loving it. A number of trends that felt new and shiny only a year or two ago have now matured and bedded in.
Take the street food scene. The mix of international foods and new ideas you could only get at the Boiler Shop Steamer is now regularly available at the Sunday Quayside Market, the monthly Armstrong Bridge Jesmond Food Market and at any number of similar events. For once Newcastle, if not actually ahead of the curve, is ripping the surf alongside the world’s major cities when it comes to the streetfood phenomenon. Stalls have become restaurants and, conversely, restaurants now send stalls to these gatherings. Papa Ganoush, a veteran of the Newcastle scene, is due to embrace bricks-and-mortar before long, while The Grind has exchanged its burger stall for a residency at the louche but cool No 28 bar.

Now that the boundary between restaurant food and street food has become blurred, the net result is that good, fast food is available in more places than ever before, and foodies have access to a much broader range of tastes. The high water mark of this trend is Tynemouth's wonderful Riley's Fish Shack. Its Quayside offshoot has also recently morphed into the new Barrio Comida (itself a former popup event). I’ve already sampled it – watch out for the review early next year.

At the finer end of the dining table, things are equally splendid. Kenny Atkinson's House of Tides deservedly maintained its Michelin star, as did the Black Swan at Oldstead, which is definitely worth the trip south. Meanwhile James Close and his team at The Raby Hunt were the main event at this year's Michelin ceremony, where their second star was the big news.

For all its faults, the tyre company’s travel guide remains hugely important to the restaurant world, and the award of a second star is a Very Big Deal Indeed. In fact, it’s beyond huge. To put it in context: Noma, voted best restaurant in the world on a number of occasions, currently has two stars; my favourite eatery in London, Hedone, has only one. So James Close’s achievement cannot be overemphasised.

These, however, are not the only restaurants doing wonderful things on the tasting menu side of the food spectrum. Peace and Loaf recently received a fabulous and well-deserved write-up in the Financial Times, while Rockcliffe Hall, Restaurant DH1 and Jesmond Dene House all continue to offer excellent quality dining.

Newcastle may be heart of the region's food scene, but it's worth noting the uptick in quality outside the city too. Bamburgh's The Potted Lobster, Darlington's Truffle, The Crathorne Arms of Teeside and The Feathers Inn at Hedley on the Hill all served me excellent meals this year. The Bay Horse in Hurworth on Tees continues to thrive, and The Staith House in North Shields seems to get better and better. There are many more – just look at the list of Finalists and Winners in this year's Secret Diner Awards. More power to their collective elbow.

The sheer number of new openings this year has been dizzying. The new Grey's Quarter of Eldon Square resulted in more choice for those who are happy in chain restaurants – at first glance Reds True Barbecue and Chaophraya look rather more interesting than the rest. Happily there’s also been a flurry of new independents: Dobson and Parnell, Shilling, Central Oven and Shaker, 1964 and The Fork in the Road will all have wait until the new year to read about themselves on this page.

Alongside this onslaught of exciting new dining opportunities, it's important to remember the places and the people who form the backbone of the region's restaurant scene, the venues that have been serving us well for years. People often ask me where’s the best place to eat out. To which I always answer: wherever is good to go most often. It's easy to get lost in a deluge of freebie blog posts and ill-informed TripAdvisor reviews. Instead, I'd encourage you to go back to the last place you really enjoyed. The only downside to having so much choice is that there are only so many diners to go round.

So please: cultivate your local eateries. If there's somewhere that you like, they need to see you as often as you can afford. Speak to the staff. Find out what the chef really likes to cook, and order that. See if they have any new dishes they'd like to try out on you. In other words: become a regular. Eating out well, and often, is a sign of a decent society. So in 2017, please be as decent as you can manage.

On which note, I'd just like to thank all of you who read my words each week and especially those who write to let me know where I need to be going next, why you agree with me and - occasionally - why you think my judgment sucks. It makes doing this all the more fun.