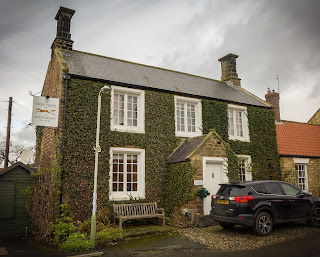 
The paradox of perfection is what makes high-end restaurant cooking such a unique challenge. Every day a chef has to turn up for work and plate up hundreds of dishes, aiming for flawlessness each time, yet knowing deep down that there is really no such thing. The chef is, in a sense, doomed to failure before he even ties his apron: yet it’s only in the trying, over and over again, for that mirage-like moment in which you know that a dish couldn’t be improved by a single grain of salt, that you can really succeed at the very highest level. 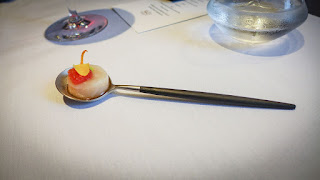 I had cause to reflect on all this as we left The Raby Hunt after a spectacular lunch, trying to figure out why this meal, which I’m happily and easily awarding 6 stars, was better than previous visits I had also pegged at that level (which is the maximum number of stars that will fit comfortably on my Secret Diner window sticker). Ultimately I concluded that chef James Close’s secret is the gentle evolution of dishes, the search for better raw materials and the slow but steady refining of techniques. It makes sitting down in his plush dining room a joy. 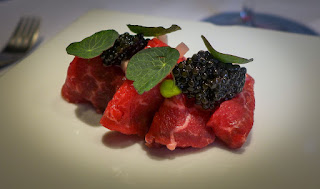 Take, for example, a plate of raw beef. I tasted an earlier version of this dish a couple of years ago when it was in development. Then it was pleasant but unbalanced. The cow itself, a Dexter/Wagyu cross, didn’t have the depth of flavour to be heard clearly over the supporting cast.

Now, however, it is a triumph. The Australian beer-fed Wagyu is the right beast for the job, astonishingly tender and with an intensity that made me wonder for a second whether it had been smoked. It had not. Blobs of basil purée were like summery jolts of emerald, while saltiness and pepperiness were provided by caviar and nasturtium leaves. It takes something of real note to make both Mrs Diner and I shut up at the same time. We ate the dish in reverent silence. 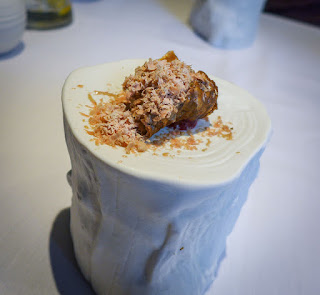 Elsewhere, a crisp-dried artichoke skin, which previously appeared on a duck dish that I had enjoyed immensely, has been reborn as an early meal snack, providing a vehicle for “hot and cold offal”. The hot is a sensational ragu of pigeon innards, the cold a grated frozen liver (foie gras?) parfait. The whole arrangement arrives on a beautiful white porcelain log, looking like an offering from the fairies. We were advised to eat this quickly and of course we did as we were told. There was vegetal crunch, pungent dark depths and frosty lightness, all in one bite. Remarkable. 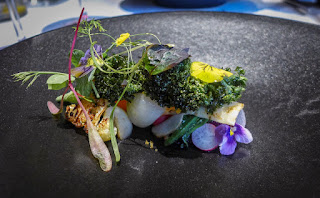 There was also a winter salad, in which I lost count of the number of tweezer-assembled vegetables and flowers, each seemingly prepared in a different fashion. Showing off has never tasted better.

The Raby Hunt no longer opens for lunch, other than on a Saturday, a decision which was made a year or so ago. Removing a few services from the weekly rota must have helped expedite the development of new dishes, and it shows in the desserts, which feel sharper, keener and more grown up than I remember. 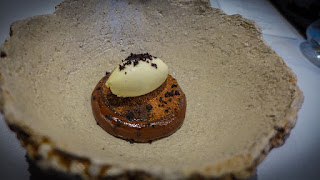 A warm chocolate mousse was so good I want buckets of it, right now. In its depths lurked glorious nuggets of something chewy and fudgy, while it was topped with a black olive tuile that provided texture but also seasoning, making the whole thing sing just that little louder. 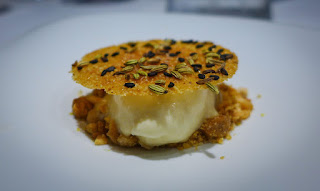 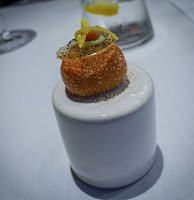 A lemon dessert arrived in three servings, including an exploding sphere and a doughnut of astonishing texture and, thanks to a dusting of ginger sugar, gentle warmth.

Since my trip to Summerhouse last year I’ve told anyone who was willing to listen that the team here was producing food easily worthy of two Michelin stars. On an earlier visit I was accompanied by a friend who used to be a Michelin inspector, and she predicted the same. Happily for James Close, his family and colleagues, Michelin agreed with us both and the second star was bestowed in October. 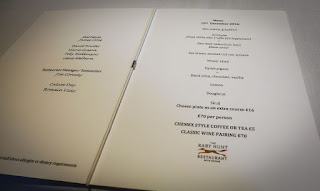 The story of how Close quit his golfing career to take up cooking in this family-owned business, achieving his first star within three years, is now well-worn, if still remarkable. To have pushed on from there is really something else again. There are only 20 restaurants at this level in the UK, and nine of those are in London. To have one just a short hop on the train from where I live is - from an entirely selfish point of view - great. 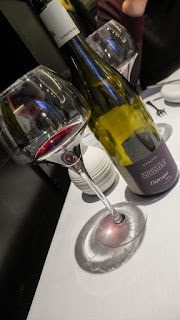 The attention that comes with the accolades brings new challenges. For years there was only Close and his sous chef Ryan Bunker in the kitchen. It is more crowded in there now, as it is front of house, where there are new faces. This takes more management and organisation. Just once or twice during our visit I felt that the service may have become a bit too slick, some of that rough warmth having been rubbed away. And, at least for my taste, they really must ditch their CD of piano classics.

The wine list remains full of intrigue and we enjoyed a bottle of the Domaine de la Chevalerie Cabernet Franc, which had just about enough acidity and freshness to partner a number of the dishes effectively.

But a visit to The Raby Hunt is all about the food, and in this regard there are no issues whatsoever. 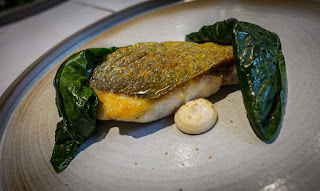 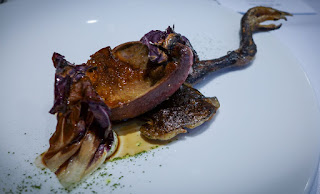 Old favourites, like pan-fried bream with smoked cod roe, and a dish of breast and leg of squab pigeon, were as good as ever, like meeting dear friends.

An additional dish of fried cod skin brought back memories of the first dish on my very first visit here, in September 2013.

Back then, the skin bore just a few dots of aioli, a frame waiting for inspiration.  Now it embraces caviar and creme fraiche.  Sure, in those three years the cost of lunch may have risen from £45 to £70, but the standard and confidence of the cooking have risen far more.

All things are relative, but £70 is actually superb value in the world of fine dining - if you know of a two-Michelin-starred gaff charging less for ten dishes of perfection, I’d love to know about it. The evening meal boasts a few more dishes and a few more pounds.
It is the all round elegance and thought that goes into the food, combined with a certain restlessness and inquisitiveness of spirit that impresses me most. There may be no such thing as perfect, but I’m excited to see how close to it Close can come. 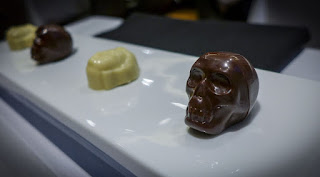