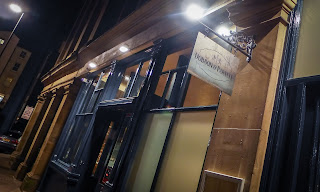 
Some addresses come with a whole bain-marie full of history. For anyone with a passing interest in Newcastle’s restaurant scene, 21 Queen Street is the most famous location of all.

It was here that Terry Laybourne held a Michelin Star for most of the 1990s, and from where he sowed the seeds of his 21 Hospitality Group. Many of the North East’s most successful young chefs began their careers in this kitchen. After Laybourne made the shrewd decision to relax his dining offering, and moved to Trinity Gardens, I was always pleased that he kept the 21 moniker.

The building came alive again for a while with Pan Haggerty, which turned out some pretty good cooking until it went into liquidation in early 2014. Now the doors have swung open once more and I’m pleased to report that the ghost of fine dining past still lives inside the old place. 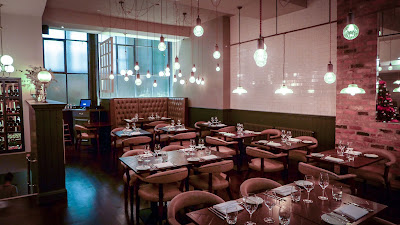 To the credit of owner Andy Hook and chef Troy Terrington, they have embraced the building’s culinary history rather than shrink away from it. In naming the place after the architects (John) Dobson and (William) Parnell, and in doing it out in a way which yells “Victorian era, yeah?” - banquettes are sage green, while tiles and waiters both come in sharp black and white - this reboot is given classic substance from the get-go. What arrives on the plate is considerably more modern, but equally classy. 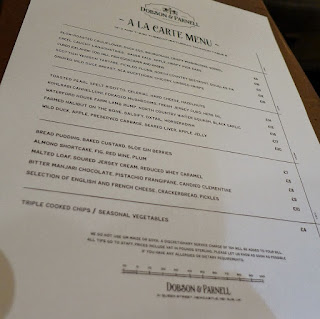 Hook’s other two restaurants, Blackfriars and Hinnies, feature menus that look back rather than forward; he must have been tempted to do likewise here. However Chef Terrington’s food feels very much of this age, featuring complex assemblies of ingredients treated in all manner of zeitgeist-surfing flavour-generating ways. 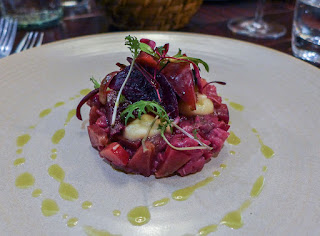 Take my starter of venison tartare. The meat itself was rather mild, perhaps coming from a farmed rather than wild specimen, but it had been given a boot up the rear by the inclusion of niftily pickled plums, and lent depth by deftly smoked beets, which had been reared, of course, by Ken Holland. The dish was a restrained but rather lovely study in clarets and purples, lacking only, perhaps, a few thin slices of toast on which to pile it all. 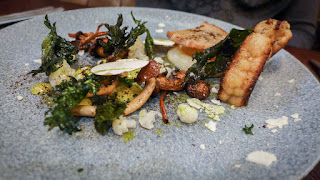 Mrs Diner, as is her rather irritating wont, picked out a stunner: a vegetarian dish featuring a deeply caramelised hunk of cauliflower supported by nutty fried mushrooms and a clever sort-of duck egg in which the slow-cooked yolk was surrounded by a circle of cauliflower purée masquerading (fooled you!) as its white. Raw cauliflower, a slice of sourdough toast and deep fried kale provided texture. I struggled to find the sorrel, but who cares: this was a triumph with or without it. 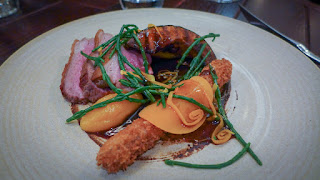 The quality of the lamb rump on my main course was without dispute, with a rich and almost gamey flavour that I usually associate with hogget. Squash was presented in three different cheffy formats, the best of which was a chunk, still bearing its skin, that appeared to have been barbecued. It tasted deep, and deeply of the earth. A smear of black garlic and a sauce so reduced that it shone provided umami thump, while samphire seasoned everything neatly. A glass of Arnold Holzer’s unusual Zweigelt from the Wagram region of Austria was perhaps a bit of a light choice for this dish, but its availability did at least speak of a wine list with intrigue. 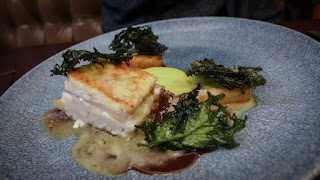 Mrs Diner’s tranche of halibut had been cleverly butchered in order to allow it to be served on the bone, although it had sadly spent a few crucial moments too many in its pan of sizzling butter. Consolingly, it came with some gloriously rich oxtail, a cylinder of the criminally underused salsify and more crisp-fried kale to round out a thoughtfully put together plate.

All of this was ordered from the à la carte, which took our eventual bill to just shy of £92, including drinks and service, although I should say that the dishes being enjoyed all around us from the early evening menu (£25 for three courses) looked just as neat, complicated and tasty as our own.

The pudding we shared was in fact available on both menus. It also provided the only serious clanger of the evening. 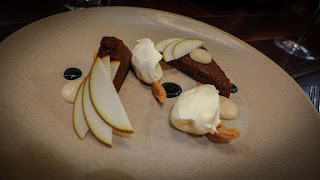 I’m going to give Terrington his “we’ve not been open long” free hit here, because this thing was a total shocker. Dull, dry triangles of malt loaf were paired with cream that was supposed to have been soured, but just tasted faintly off in a blue cheese sort of way, and with nubbins of caramel that were so salty to be almost emetic. A raspingly tart apple purée completed the horror show.

It was, to my taste, weird. Mrs Diner used the word “rank”.

A couple of other flies in the proverbial: service was friendly enough, although I’m still none the wiser as to what smoked clam “frumenty” comprises.

“It’s the style of cooking,” offered our waiter. Right you are then.

Pro-tip: if you don’t know, don’t freestyle it, just ask Chef. That’s what I was taught to do, anyhow. Frumenty is a kind of medieval porridge. From ‘frumentum’, Latin for grain. But of course you all knew that.

Also, they might want to look at how the tables are set up. The two of us were crammed between another two and a four-top. Every time food was delivered or removed from the latter I had to move my chair to let the waiter squeeze through. This got old pretty quickly.

These are details that can be put right as quickly as the recipe for that hellish dessert can be lobbed in the bin. The big news is that there is once again some serious cookery going on at 21 Queen Street. A venerable address has been nicely tarted up and given a chef with the skills to honour the past, but also to strike out in his own direction. 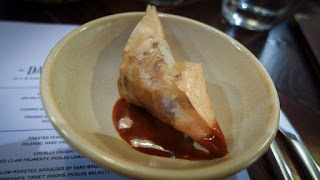 I enjoyed returning to what used to be a favourite haunt. Once it gets comfy in its own skin, it has the potential to become a cracking addition to an already stellar Quayside scene.