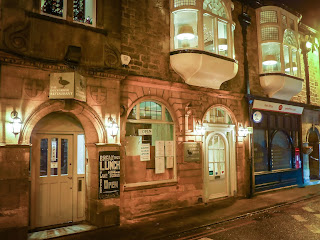 How long does it take a dish to travel from the best restaurant in the world to Corbridge? Thanks to my recent meal at the Duck House, I can tell you precisely: 14 years.

In 2003 chef Ferran Adria and his team of molecular maestros at the now-defunct El Bulli created the first of many dishes that would involve their new “spherification” technique. It was a liquid pea “ravioli”, a small green ball that exploded in the mouth with pea liquid. Thus was born unto the world a whole new experience of creative esoteria masquerading as food. 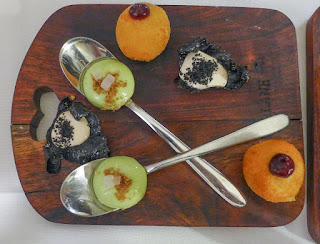 To say that I was surprised to be served this famous and revolutionary dish on a dreary February night in a sleepy Northumbrian village, is putting it mildly. There it was, sitting on a spoon as a pre-starter amuse bouche. I’m ashamed to say my snarkometer went into overdrive.

“Ha! Look which chef got a molecular gastronomy kit for Christmas,” I muttered, all arch and superior.

Mrs Diner quickly put me in my place: “Don’t be pompous, taste it,” she said.

The explosion shut me up. It was perfectly made, and perfectly delicious.

Alongside it, a coal-black cracker of squid ink carried the oceanic funk of a blob of cod roe, while a delicate croquette was fairly stuffed with confit chicken. As a statement of intent, these pre-dinner nibbles worked perfectly. I sat up straight, and prepared to give whatever followed my fullest attention.

I can happily report that the majority of our meal was excellent. Even where it wasn’t, the flaws were born of ambition rather than timidity, which makes them all the easier to accommodate. But when it all clicked, there were moments of real triumph. 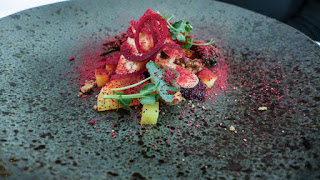 Mrs Diner’s starter was one. Its title - “Northumberland vegetables and pickles” - was a grand understatement. What arrived was a dainty assortment of so many cubes of this, leaves of that and pickled strands of the other to mention, the whole thing covered in a powder of dehydrated beetroot.

“This is so complicated, but just so tasty,” Mrs Diner murmured, as the last of it disappeared. 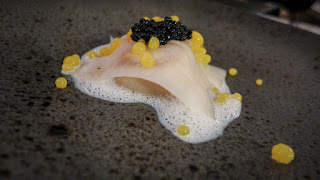 My own starter was scarcely less impressive. A brace of chubby scallops had been cooked with sympathy and total precision before being napped in a foam of buttermilk, hidden under a drape of pickled mooli and topped with both real caviar, and “caviar”, the latter being pearls made from juiced orange. That mooli, which was so brazenly pickled as to taste like nothing so much as a bag of salt and vinegar Discos, was an honourable blunder. Honourable, as the salt and vinegar brought a touch of seaside nostalgia to proceedings. Blunder, as it very nearly high-kicked the rest of the dish into tangy oblivion. 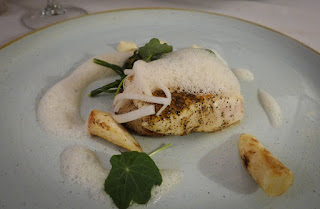 I stayed with fish for my main course, and again there was just a teensy bit too much going on. The seasoning on a handsomely cooked tranche of halibut either was, or was very like, the chilli and sesame-based Japanese togarashi. On the accompanying cod cheek was what tasted like Chinese five-spice. Asian seasonings and fish can be best of pals, but here they masked rather than lifted some excellent natural ingredients. 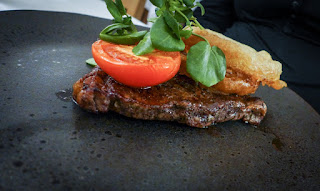 Across the table, no such issues for Mrs Diner, whose simple sirloin steak was cooked as requested, and full of deep beefiness.

“Sometimes I just want a steak,” she had shrugged defensively when I complained about the choice. I long ago ran out of novel ways to describe sliced cow, so she knows I hate it when she orders one. The same goes for chips, but these were crisp and rustly and, I have to admit, delicious when mashed into the steak’s glossy red wine jus. 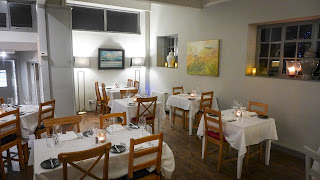 All of this top-flight food action went down in a cute white-clothed room that was thoughtfully lit and punctuated by colourful blasts of pleasant art, which is for sale should the need to invest grab you. It was a lovely spot to spend an evening. Both waiting staff were disarmingly charming, as well as being impressively clued up on what was happening in the kitchen. 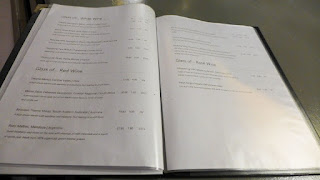 There was a very decent wine list, of which - hurrah! - 14 selections are available by the glass, including the cherry and herb silkiness of the “Roaring Meg” Kiwi Pinot Noir I tried. 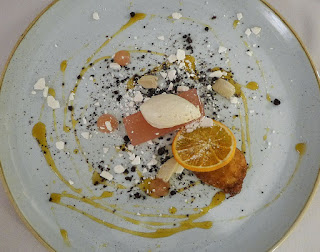 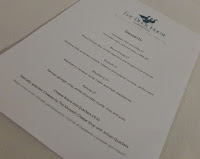 Puddings witnessed a last blast of creative verve. Mrs Diner’s, all swirls of caramel and rubble of blood orange crumb, gave the impression that Jackson Pollock may have been at the pass. The blood orange jelly at its heart didn’t quite capture the racy tartness of that most wonderful of citrus flavours, but a doughnut on the side was a lovely orb of deep fried nostalgia. 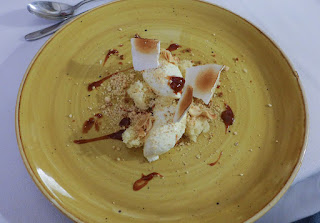 My parsnip sponge, eerily light and presumably microwaved, gave lie to those who insist vegetables - and indeed microwaves - have no place at pudding time. A white chocolate crumb and a fine caramel of, I think, yuzu and miso, helped it on its way.

Make no mistake about it, there are complex and delicious plates coming out of this kitchen. Given the intricacy of it all, I was most impressed by the consistency of execution. While a few dishes need some refinement, others would sit quite happily at just about any of our region’s best restaurants. 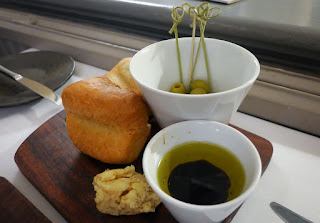 The name of the chef who may or may not have got the molecular gatronomy kit for Christmas is Ray Hunter. His is a name to keep an eye on. This meal was a very enjoyable mix of solid classic cooking with just enough modernist whizz and pop to make it fun. 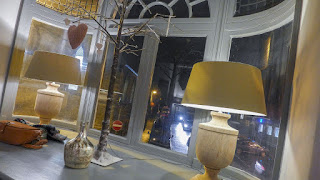 Pea spherifications in the old Corbridge Town Hall – whatever next? I don’t know, but if it’s from this kitchen, I’ll have a plateful.

[The bad news is that Ray Hunter has left The Duck House and reports from readers suggest that the kitchen's ambition has gone with him.  The good news is that he's only moved round the corner in Corbridge to the Wheatsheaf Hotel.  I'll be reviewing his new home once he's settled in.]