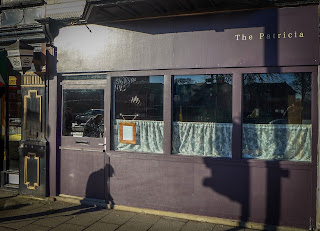 
At the beginning of these reviews, I usually try to only hint at the verdict, keeping full disclosure to the end. It probably comes from some vain idea that if I’m going to spend time writing it down, I’d quite like you to actually read all the way through. It’s what TV people call “jeopardy”. But then there are times when the restaurant in question is either so wildly good or honkingly bad that there’s just no point in beating about the bush. This is one such occasion.

The Patricia, Jesmond’s latest addition, recently served me the most flat-out enjoyable meals I’ve eaten for... well, for ages. It was brilliant. I loved it. We had a great time. If that’s all you needed to know, fine, you’re done. If you want to know why, you’re welcome to spend the next 800 words in my company while I shout about it. 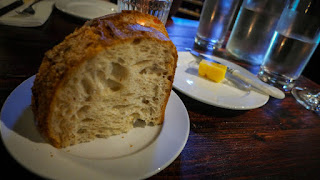 Like so many great meals, it started with great bread. A genuinely tangy, almost waxy crumb was contained by a crust of serious and glorious heft, laughing in the face of what now gets called sourdough. And to slather all over it, a cultured butter with an unusually dense and complex flavour. This was the kind of bread and butter that makes you sit up straight and pay attention. 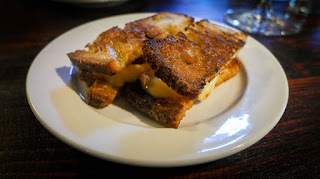 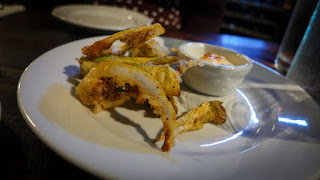 I’m more of a savoury than a pudding man, so a list of pre-starter snacks – essentially extending the meal by one course – is just fine by me. Especially when the list contains items as ambrosial as deep fried wisps of sherberty Amalfi lemons and violet artichokes, or a finger of cheese toastie from which farmyardy Époisses de Bourgogne squidges out, the decadence of it all kept just in check by some tangy preserved cherries. 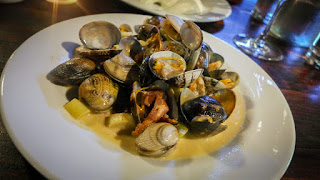 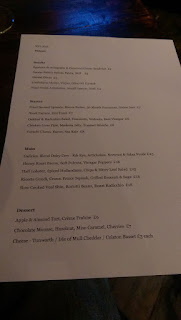 The menu here is a real gastronomic name-dropper: the beef is Galician blonde, the clams are Italian, the parmesan has been aged for 36 months and the jamon is - but of course - premium Ibérico Bellota. All fine and dandy, but the really big news is that all of these prime ingredients are hewn into platefuls of joy by a chef who seems to understand perfectly what makes eating out, at its best, so much fun.

That man is Nick Grieves, who previously cooked at Durham’s Garden House Inn, before stints at a pair of London icons: Simon Rogan’s Fera restaurant at Claridges, and The River Café. There is, to my mind, more evidence of the influence of the latter in the Patricia’s focus on sheer quality of produce, and the preference for flavour over neat presentation. 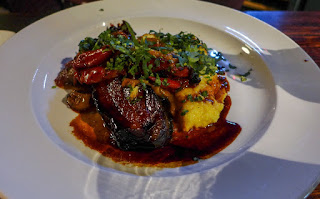 Take a main course of honey roast bacon, in which a stonking great collop of premium pig had been cooked down to the exact point at which eating it makes you sigh. 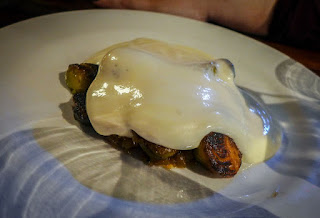 Or a starter of Brussels sprouts, caramelised to nutty perfection, and hiding under a 24-tog duvet of parmesan foam. 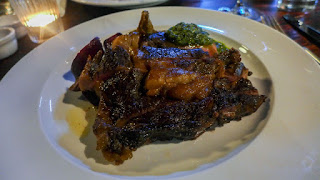 Or, the knock out punch: a rib-eye of that sensational Spanish beef, in which the central nubbin of just-rendered fat was like a buttery, meaty epiphany. An emerald dollop of salsa verde had just enough lift and zip about it to keep me from descending without trace into some beefy version of a black hole.

But it’s not just the food. The music - played at an appropriately enthusiastic volume - was ridiculously cool. Devendra Banhart, Metronomy and Discodeine, in case you’re wondering what cool is, at least according to me. And hurrah too for the best wine list I’ve seen in a small restaurant for as long as I remember. There were 13 options by the glass, starting at £3.50 a pop. A gorgeously restrained Pinot Noir from Catalunya and a Cote du Rhône Villages were almost as good company as Mrs Diner. Almost. You can have proper - and here’s that word again - fun, drinking here. 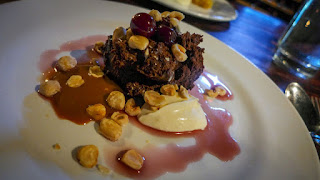 Puddings were, I need scarcely tell you, great. A hearty dollop of chocolate mousse - you can keep your tidy quenelles when the thing tastes as hectically good as this - was given the crunch of toasted hazelnuts, and seasoned by a rather grown-up miso caramel. 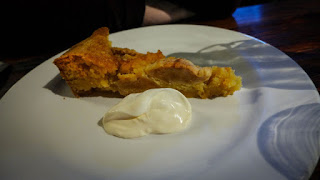 The only other choice, an apple and almond tart, saw bracing fruit and marzipan sweetness vie for attention within a fine pastry.

All of this happened in front of an open kitchen, in a room that pulls off the rare trick of being both brown and tasteful at the same time. Tables are bare wood, and the lighting is low. The service, with just a couple of staff looking after everything, was knowledgeable and relaxed. Even the handwash in the facilities is first rate (Aesop, a premium Aussie brand – I promise you’ll be smelling each other's hands by the end of the meal).

Thanks for staying with me until the end; I hope it was worth it. But thanks especially to Nick Grieves and everyone else involved in The Patricia, for opening up in Jesmond what is dangerously close to my idea of the perfect neighbourhood restaurant. Thanks to his gran Patricia for the inspiration and the name. We’re already booked in again for a repeat performance. Just to make absolutely sure, you understand. I can’t wait.