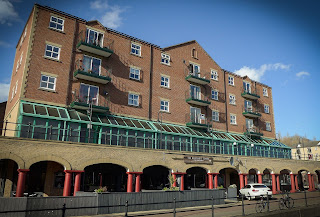 
We might only be in April, but unless someone wants to open a restaurant where you don’t have to pay at all, I think we can probably close down the “Best Value” category in my 2017 awards.

After my all-you-can-eat fest at Tenji, I moved on to The Merchants Tavern in St Peter’s Basin. Here, at lunchtime, they will serve you three courses from a short but appealing menu and hewn from good ingredients, together with a glass of house wine for - wait for it - twelve quid. Or they were when I visited a few weeks ago.

I’ve no idea how they could do this, but I’ll leave the mark-up percentages to the chef. All you need to know is that if you’re looking for a meal out in a picturesque setting without having to raid a bank, this is the place. If the cooking had matched the prices, I’d have been raving about it. Sadly, it didn’t.


I’ve been to this big lump of a pub once before. Back then it wasn’t worth writing home about. Called Bascule, its menu consisted mostly of fried things from the freezer. Now the pub has changed hands and name, installed a new kitchen team and started bragging about ingredients and suppliers. The Merchants Tavern, peering out over the marina, clearly has aspirations to gastropubbery, so Mrs Diner and I duly moseyed on down. 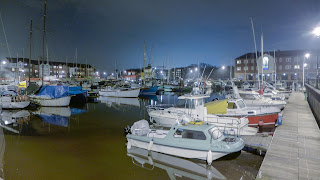 It was actually evening when we called in, so we paid £14 each for three courses, with no booze included. This was still value incarnate. 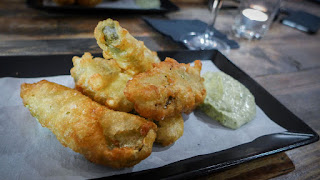 While perusing the menu we sharpened our palates with some deep fried pickles and house bread and butter for a further four quid. The former were rather good, thick wodges of fine salty gherkins wearing a slightly greasy, but extremely crisp, overcoat of batter. 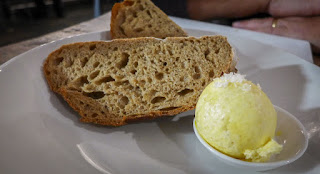 Slices of homemade bread, light-tan brown, had good crumb and crust. They came with a golf ball sized scoop of “chicken butter”. The fashion for whipping meat fats and skin into butter seems to be gaining momentum. I wish this trend would stop, right now. This spread was virtually inedible, it was so boomingly, hectically salty. 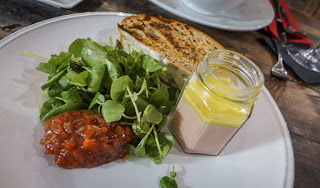 Indeed, seasoning was the one over-riding problem with the entire meal. Both my chicken liver parfait and Mrs Diner’s roast garlic and potato soup, pretty as they were, arrived under-salted to the point of bland timidity. 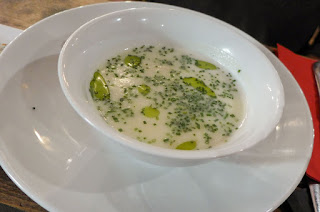 In fact the soup, though elegant in appearance, managed to taste of absolutely nothing at all. 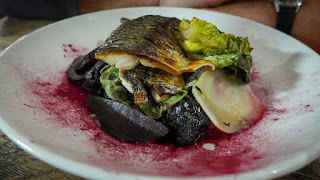 Mains - huge portions both - were a little more successful. A fine pair of mackerel fillets had both crisp skin and yielding, densely flavoured flesh, and sat astride a generous salad of white and purple beets. Except that the beets were great humourless chunks of tastelessness. It’s not hard to make beetroots taste good: a little red vinegar and thyme in the roasting oil and they can be magical. Here the whole arrangement was dusted in violently purple powdered beetroot, which added to the drama, but nothing to the flavour. 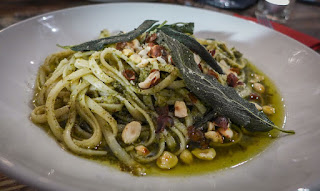 A bowl of hand-rolled linguine was properly al dente and sensibly served with crisp sage leaves, parsley and sage pesto and crunchy toasted hazelnuts. Less sensible was the inclusion of a brown butter that, along with that oil-packed pesto, resulted an Exxon Valdez of fat. After a few bites I began to rather regret those deep fried pickles. And all that chicken butter. I was drowning in oil along with the pasta.

“At least it’s cheap,” said Mrs Diner chirpily, trying to make the best of it. So we ordered desserts. 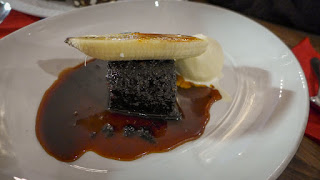 A sticky toffee pud was decent, but lacked the heft that comes from the inclusion of dates. Can we get one thing straight? Sticky toffee puddings contain dates. They just do – it’s what makes them sticky. If you want to serve a light sponge swimming in caramel sauce then that’s fine, just don’t call it sticky toffee pudding. As if to compensate, the chef had decided to garnish the thing by precariously balancing a huge slice of raw banana on top. Bizarre. 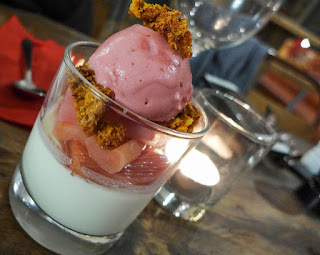 Meanwhile, a nondescript yoghurt panna cotta sat beneath the season’s first forced rhubarb and some moreish cinder toffee. I think it might have been an idea to add some sugar to the rhubarb (I winced at its acidity). And I can’t work out why they felt they had to crown this assembly with another gratuitous supplement: in this case, a dollop of pink ice cream of unspecified fruitiness. I think it was cherry.

Despite not ordering coffee, we were brought some homemade rocky road by Irish owner Catherine, who was enthusiastically helpful throughout. When the bill arrived, Mrs Diner and I exchanged a look: neither of us could recall ever receiving so much for so little.

I did try a glass of red wine, a Malbec I think. I couldn’t get beyond the first sip. It could have been Vimto. This was probably the worst wine in a restaurant glass I have tasted since a particularly bad Retsina I inadvertently ordered on my first trip to Greece in my 20s. I’m guessing this is a pub where you should really order beer.

I have to commend this place for trying. To get good local ingredients at these prices is an achievement. I suspect they may do simple things, like Sunday lunch, really well. Apparently they have live music and good ales. I can certainly applaud the chef’s ambition, but for the team to send almost every dish out without tasting it (or, if not, having a team without tastebuds), is a real shame. Sure, it was tremendous value, but it was also tremendously disappointing.

[NOTE: I’m told that The Merchants Tavern has already had a change of chef since my late February visit. I’m very keen to get some feedback – please let me know what you think of the new regime - add a comment below.]