The Fork In The Road 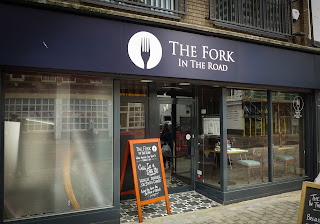 It was with some relief that I found this restaurant looking, and tasting, much like any normal place.

This isn't like your average restaurant; it's a not-for-profit set up by Andy Preston, chair of the CEO Sleepout charity, to be a place where ex-offenders, recovering addicts and the long-term unemployed can get a second chance through employment in catering. Hence the name.

Thankfully, they avoided any schlocky fit-out and plating opportunities this back-story offered. Would the room be done out like a jail cell? Would we be shackled to the table? Would there be sauces served up in hypodermic needles? You may laugh, but we live in a world that includes cereal cafés and chefs that think it a cracking wheeze to serve dishes directly onto the back of diners hands. When restaurateurs offer not just a nice meal, but an “experience”, strange things can happen.

Thankfully, there was not a jot of that sort of thing. The fit-out is one of the loveliest and most impressive I have seen for some time. It feels new and fresh, but not awkwardly so. There’s a whole raft of seating options, from Chesterfields and armchairs to banquettes and bar stools. We took a table in the window, the better to indulge in a spot of people-watching. 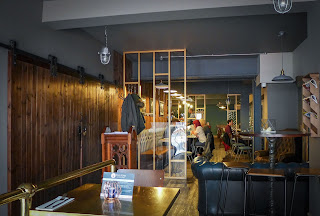 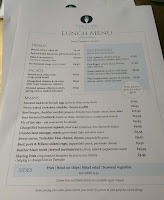 The restaurant has been given a thorough lick of a nice shade of greenish-blue, with outbreaks of richly stained wood and brass. There’s a splash of that same blue on the menus and their website, together with a simple but effective fork logo. I don’t usually comment on branding, but whoever is responsible for The Fork in the Road’s corporate identity has done a fine job; it’s consistent, and clean. This is an outfit that has thought about what it's doing. But how was the food?

When a restaurant has such a commendable reason for being, I always fret that the cooking won’t be as compelling as the purpose; after all, I can’t taste a set of ethics. Happily, there was plenty to enjoy during the meal we cobbled together from a set menu priced at £19.95 for three courses, a lunch à la carte and an additional menu of specials to celebrate “British Pie Week”. 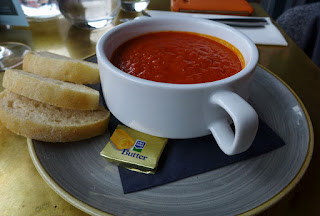 The battle between tomato and smoky paprika in Mrs Diner’s soup starter was declared a score-draw, the latter emphasising rather than diminishing the former. This was a generous and well-made bowl of comfort and warmth with some real depth of flavour. 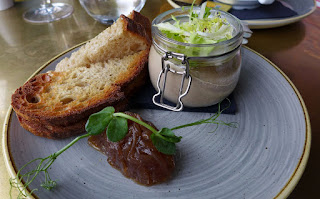 My own starter of chicken liver parfait was nicely seasoned and would have been spot-on had it not been fridge-cold. Modern refrigeration is all well and good, but it's the enemy of flavour. The accompanying sourdough toast, provided by The Great Northern Bakehouse, was superbly crusty. A shame then that it was such a struggle to get that over-firm parfait out of its little glass pot and onto the bread. 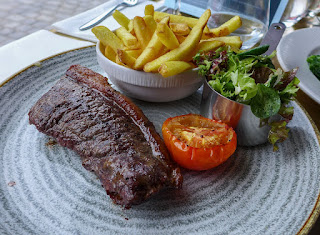 I rarely order steak when eating out - it’s hard to judge the skill of a kitchen from their ability to season and cook a slice of meat - but, slightly the worse for wear from the previous evening’s entertainments, steak had become a craving. Hurrah then that my slice of rump was rosily rare, and clearly came from a decently kept and butchered beast. It had none of those weird boiled-irony notes that can come from from under, or wet-aged beef - just a nice all-over char. Chips were crisp. Our of rare generosity I’m going to ignore the fact that a pointless miniature saucepan of underdressed salad was also present on the plate. 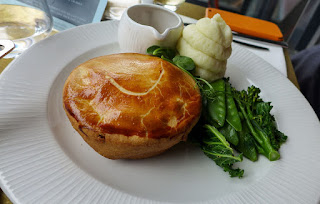 Mrs Diner got in the esprit de pie with a chicken, mushroom and tarragon number. Before you ask: yes, pastry on top and bottom. Rather good pastry too, perfect for shmooshing into homely chicken gravy filling, once Mrs Diner had admitted defeat. 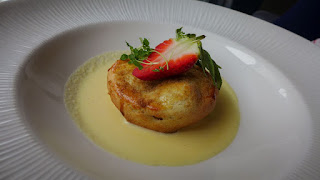 There was more pie for pud: a decent Bramley apple effort with a light custard. 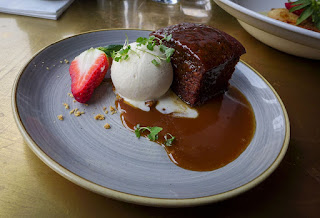 The sticky toffee pud was not so great, featuring a too-light sponge with no detectable dates. To my mind, dates are a non-negotiable ingredient for any proper STP recipe.

Service, during a moderately busy lunch service, was a bit patchy. It was always friendly, but we were slightly abandoned a couple of times. One server seemed far more concerned with getting tables set up for the evening customers coming that evening rather than dealing with the ones that were there right now. It also took a weirdly long time to get some cutlery to eat our food with.

“Problem is, all the forks are in the road, not on the table,” Mrs Diner noted wittily.

But these are minor whinges about a restaurant that has got, even at this early juncture, a lot of things right. In addition to their progressive recruitment policy, they are a no-tip establishment, declaring instead that they pay their staff a decent wage - how refreshing. I lend this particular policy my full support; tipping feels to me like some weird leftover from an age of subservience, not to mention the issues that sharing the damn things out (or not, as the case may be) causes. Properly paid (and trained) staff are a much better option.

This place is already a very welcome addition to the Teesside dining scene. With just a couple of tweaks to recipes - and new head chef Louie Miller, ex of The Star at Harome should help - it could become stellar. I wish only the best for those who get to steer it further on down that road.