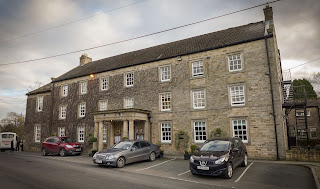 
Unless you’re Raymond Blanc, not everyone who rocks up to a hotel’s door is there for the food. Indeed, many of them won’t have the first clue about cooking. And yet here they come, paying good money to stay under your roof, full of expectation. How does a talented chef write a menu for this type of customer while also satisfying the gastronauts, not to mention scratching the itch of his own creative ambitions? Not easily.

Lee Stainthorpe, head chef at The Morritt Hotel, just a dash southeast of Barnard Castle, has had a damn good stab at it. There are steaks, triple cooked chips and hearty sounding puds. But there are also gels, powders, puddings involving veg, and the odd ingredient that might have you scuttling off to Google, just to be sure. It was this latter fact, not to mention the two AA rosettes, that piqued my interest and saw us zooming down the A1 for an early evening dinner reservation.


I don’t know whether the crowd that were in situ on that night were The Morritt’s typical demographic, but they were of quite a traditional disposition. Members of an antique furniture society took up positions among the flotilla of oxblood Chesterfields in the lounges, chatting about how the House of Lords is not quite what it was.

In the dining room, a strident guest claimed not to have much enjoyed the pairing of lamb and beef together on her main course. A waiter pointed out, polite to a fault, that there hadn’t been any beef on the plate. That thing I was saying about creating a menu for hotel guests? Consider this exchange to be Exhibit A for the prosecution. 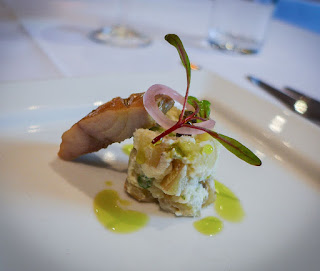 But I’m here to review the food, not the clientele, and on that score things were rather more nimble and learned. For example, an amuse of smoked mackerel and potato salad was a dainty little construction, the spuds being practically embryonic, while a lonely pink pickled ring of shallot lifted the issue. 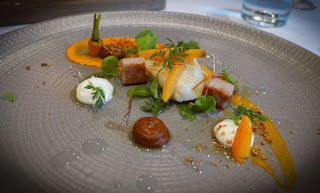 More prettiness, in shades of bright orange, pale cream and green, came as a starter of scallop with carrot. The bivalve was tender, if lacking a little char, while the inclusion of Morteau sausage gave a waft of smoky Gallic depth. The carrots, in various preparations and colours, looked lovely, although their flavour was muted, perhaps needing a little salt or lemon. 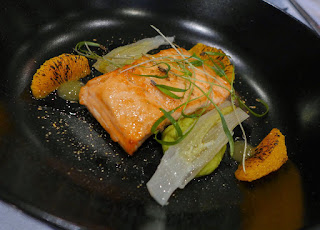 Another starter involving salmon, avocado, fennel and blowtorched orange segments (whatever next!) was well judged and executed, a light dish in which good quality fish wasn’t overpowered by any of the supporting cast. 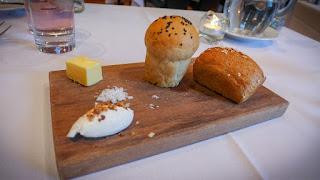 A word, too, for some really decent bread: white and wholemeal mini-loaves had been baked in house. Thank goodness they came with some normal butter, because the alternative - a quenelle of whipped beef dripping - was an aberration, having the grim waxy texture of melted candles. Chefs: if you must do this sort of thing, and I know it’s trendy right now, just keep them off my table. 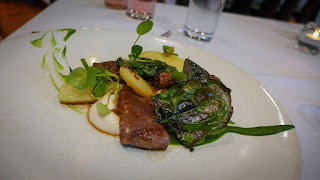 Mains were of the premium cut combined with slow-cooked joint variety. Mrs Diner’s rump cap and braised cheek of beef were both generously flavoured and came with some new season Jersey Royals and a horseradish mayo that was just racy enough to enliven the event. 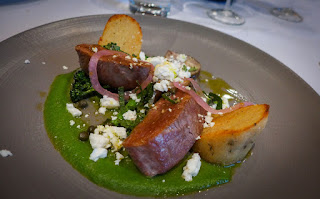 My loin of hogget - older than lamb, younger than mutton - was perfectly blushing, but the accompanying piece of salt baked lamb leg had the seriousness of flavour that only comes with serious technique. A shame that eating the gnocchi on the side was like chewing on potato flavoured Blu-Tack. This was a busy plate, with a whole host of accompanying bits and bobs. Too busy maybe. 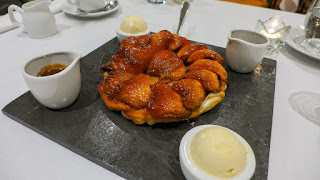 We abandoned innovation and modernity in favour of the 20-minute wait demanded by a tarte tatin. We were handsomely rewarded. This was the real deal, just a touch of caramel among the apples short of perfection. Jugs of the stuff, served alongside, allowed us to remedy this easily. This was a stirring cadenza of a pud, rounding off three courses for £35. 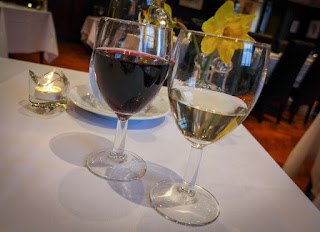 A couple of wafer-thin gripes: wine from the bar was served in rubbishy little glasses that were impossible to get a Diner-shaped nose into. My Kiwi Sauvignon Blanc and South African Shiraz both tasted fine, but I’d have rather liked to have been able to sniff them too.

It’s a shame, because the bar was rather fun, with a giant mural of a Dickensian scene by John Gilroy – he of classic Guinness posters fame (Dickens apparently stayed here in 1838). The faces in the mural, painted in 1946, are caricatures of local people and hotel staff. They all seemed to be having a very jolly time. Maybe the glasses were bigger in those days.

Mrs Diner also insists that I note that our petit fours never materialised. Mrs Diner does loves a petit four (or five). The wood-panelled dining room is rather lovely, however the pop music covers that permeated the atmosphere were less so. 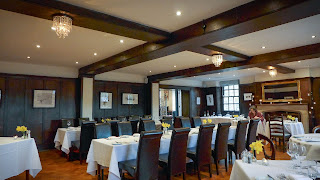 Nonetheless, if you’re into your food – and I’ll assume you are, given that you’re reading this blog – I encourage you to try The Morritt, and maybe even stay the night in one of their cosy-looking rooms. Not everything was perfect, but a lot of it was very good indeed. This is a chef, and a kitchen, that deserves an appreciative audience, including some hotel residents who really know their food.

[Oh dear.  Some time between my rather good dinner and the publication of this review, the hotel's head chef has resigned.  Lee Stainthorpe hung up his apron after more than a decade at the hotel.  If you have tried this place since then, please let me know your experience - in due course, once a replacement has been appointed, I'll revise the review.  And let you know where Lee shows up next - he's a chef to follow.]