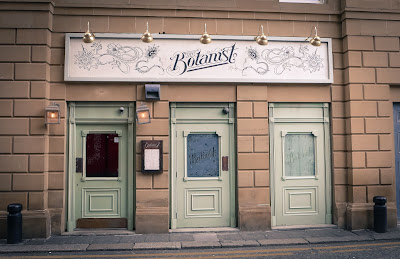 “I’m a bit disappointed,’ said our friend. “I thought we’d be drinking out of watering cans and eating from wheelbarrows”.

And then, right on cue, a white chocolate and peanut butter mousse turned up in a garden trowel. Her face lit up. 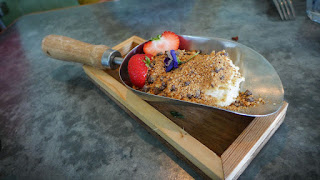 The Botanist, you see, is pretty much the ground zero of the whole food-not-necessarily-served-on-plates thing. Of course they didn’t invent it, but they can sure take a lot of the credit/blame for keeping the trend going into 2017. They have hanging kebabs, watering-can cocktails and those trowels, all the better to fit in with their wistful gardening and flora theme.

Normally this sort of pretentious nonsense would set my teeth right on edge, if not send me tailspinning off into some violent rant. If that’s what you’re here for, then I’m sorry to disappoint. Blame the service, which was unerringly charming, or the view, which was Grey Street, but, in spite of myself, I rather liked it here.
Our meal didn’t start auspiciously. We were treating a friend to one of her first meals out since giving birth. The infant came too, mercifully becalmed in her buggy. The Botanist is up some 50-odd stairs in what used to be Monument Mall. I know this because those stairs are numbered which, in turn, I know because the lift was knackered. As indeed was I by the time I’d hefted the buggy up to the restaurant.

A quick perusal of the cocktail list made me feel better. Cocktails are very much the thing here. Happily, as well as all manner of new-fangled insta-bait involving frothing this and popping that, they do the classics too. An Old Fashioned, properly stirred down then served in a chemistry flask filled with smoke and oregano - I know, I know, but it tasted alright - helped me forget the annoying ascent.

As did the staff. From bartender to host to our waitress, everyone we spoke to knew their game, was on the ball and had wheelbarrowloads of charm. Whoever’s in charge of recruitment and training at the Newcastle outpost of this expanding chain (there are 12 other “botanical creations” so far) appears to be doing a fine job. 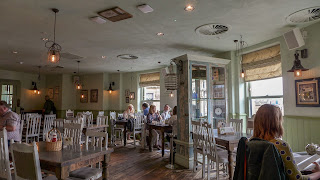 As are those tasked with fitting out the place. It’s a huge venue, built around a square central bar. Bare wood and pastel greens are the order of the day, with the theme rammed home by all manner of gardening-related bits and bobs. And those views down Grey Street, especially if you snag a window table, are as good as it gets. 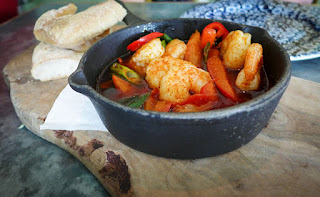 You’ll have noticed that I’ve scarcely mentioned the food. There’s a good reason for this: it was by some distance the least memorable thing about The Botanist. It all started fairly well. Pil Pil prawns were not overcooked and came in a pleasant garlic and pimenton-powered oil, with some perfectly good fougasse for dipping. 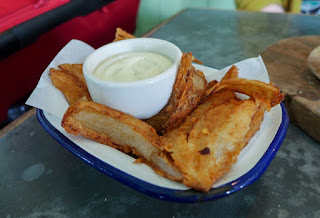 From the “nibbles” bit of the menu, deep fried onion “petals” (like a flower, like in gardening, geddit?) were crispy outside, soft and sweet inside and nice when dredged through their crème fraîche dip. 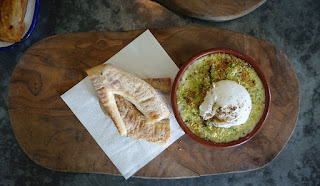 Best of our three starters was smoked haddock fondue, in which tender flakes of the fish had given their flavour to a dish of mustard-spiked bechamel and cheddar, topped with a perfectly cooked poached egg.

If we’d stopped there all would have been well, but we ploughed on into the main courses. Here we encountered some severe turbulence. 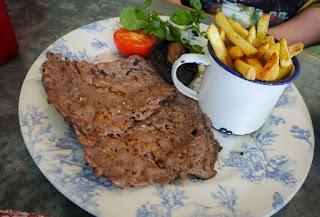 Mrs Diner’s “flattened rump” (snigger) was a travesty dressed as meat. Our waitress asked how it should be cooked, which was irrelevant as they weren’t kidding about it being flat. About a quarter of an inch, I’d say. Allegedly cooked on a barbecue, there was certainly no sign of any flavour-giving char, just sad, grey tastelessness. Crime upon crime: a warmed up raw tomato, scourge of so many terrible hotel breakfasts, was included as standard. 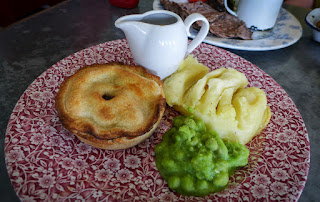 My steak and ale pie was better (it could hardly have been worse). The pastry was quite well made, encasing on all sides a filling that had some boozy depth to it. A shame that the accompanying mash was a densely overworked gloop and that the gravy was a weirdly shiny ointment of scarcely any flavour. 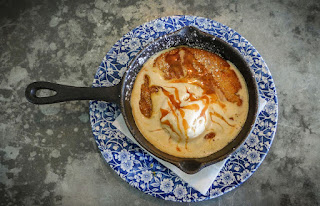 Puddings were ok-ish. If you concentrated really hard you could just about taste the peanut in that trowel-borne mousse, while my oven-baked cookie and ice-cream contraption was smutty yet enjoyable, a bit like... no, better not. 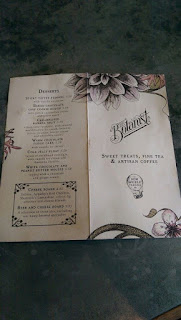 The Botanist is one of a number of themed brands that make up New World Trading Company, which was recently acquired by Graphite Capital, the investment company that help build up the Wagamama chain. It seems there is an awful lot of money to be made from hanging kebabs and trowels of mousse.

Our bill, for three courses of distinctly sub-optimal food and one nice drink each, proved this point more than adequately. It came to just under eighty five quid, including a tip.

I might come back, for drinks and the view, but that’s it. And even then, only if they fix that bloody lift.