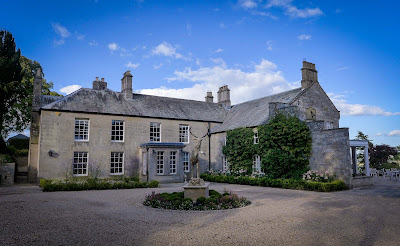 
“You’re impossible to please, I think it’s perfectly nice,” I said to my friend. “Didn’t you clock the combo of Elemis handwash and taxidermy in the loo? That’s impressive!”

My friend sniffed and looked around the bar.

We were talking about interiors, as modern chaps do these days, because it seems the owners of Walwick Hall have invested quite a lot on theirs and it would have been churlish to pretend not to notice. Refreshed and orders placed, a waitress fetched us to the dining room. The moment we walked in the debate ended. My friend had won hands down.

If you’re a fan of highly decorative wallpaper, massive prints of stags heads, velour and gold - I’m talking lots of gold – the dining room at Walwick Hall will be right up your straße. It left us speechless. My friend recovered first.

“Hell’s teeth. If Louis XIV had owned an Audi dealership, it would look exactly like this”.


Settling into my gold velour throne, I had to agree. You might get away with this fake opulence in one of those chintzy places in Jesmond that footballers wives like, but here it all seemed a bit incongruous. 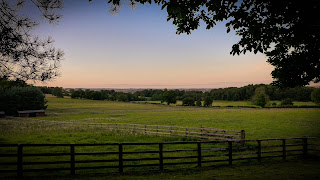 Outside a gloriously still, rural Northumbrian late-summer evening was taking gentle but persuasive hold. You’d have thought that muted, naturalistic tones would offer continuity with the stunning landscape, but apparently not. Instead Walwick Hall has a room that thumps its chest and screams “luxury, alright??!!” in your face. Plain wrong.

Luckily we weren’t there for the furnishings, but for the cooking of Steven Murray, who returned to the North East to head up the kitchen here after spells at high-end venues in the north of Scotland. Years ago he made quite a name for himself at the Queens Head in Great Whittington, near Corbridge, magicking solid gastropub fare, including some fabulous terrines and knockout steaks, from a tiny galley kitchen. I suspect Walwick Hall has given him better resources. 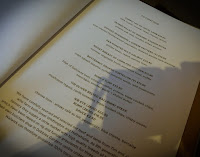 His à la carte menu offers excellent choice and good value, with starters and desserts both hovering around the £7 mark and mains at between £13 and £22. That’s roughly what you’d pay in TGI Fridays. Just saying.

Food-wise, this is one of those annoying write-ups where I find myself pointing out niggles in a meal prepared from fine ingredients by a clearly capable kitchen. There was plenty to enjoy – Murray is a very good cook – but some plates were so keen to impress they just had too much going on. 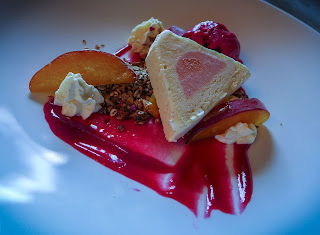 The best came right at the end. My Peach Melba dessert was a thoroughly enjoyable update on Escoffier’s classic, featuring a dreamy rich parfait of vanilla and peach, supported by a perky raspberry gel, fresh peaches and cream and some granola for crunch. 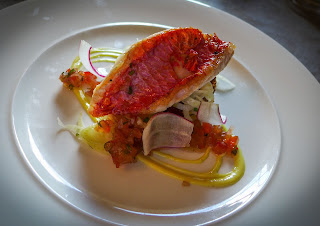 My starter was a similarly summery offering. A dinky fillet of red snapper came perched on a tangle of courgette and cucumber and wisps of french breakfast radishes, the whole business given a lift by a neatly balanced sauce vierge. In the debit column, the fish was meant to be charred, whereas the skin was scarcely crisped. 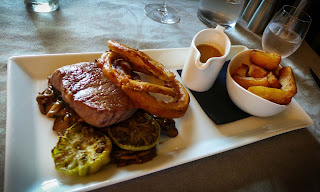 A similar fate befell my steak. I don’t ordinarily choose steak – it’s just too easy – but Tim Oliver’s Belted Galloway is no ordinary steak, so I enjoy it whenever I can. A shame then that this ribeye was cooked to medium rather than rare, and lacked in both seasoning and charring. At least the garnish of grilled home-grown green tomato was delicious, as was a mushroom ragout. Phenomenal chips were let down by an indistinct whisky and coffee sauce that tasted mostly of cream and made for sub-optimal chip-dunking. 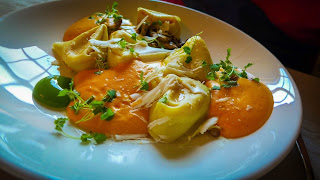 My friend’s main course of butternut squash tortellini was too cheffy by half. An espuma of more squash covering most of the plate was a rather dull echo of the pasta filling, which had itself been flavoured with something I couldn’t place but tasted a bit like cherry lips. Odd. A gel of cucumber felt like an interloper from another plate entirely. The dish lacked some much-needed acidity. 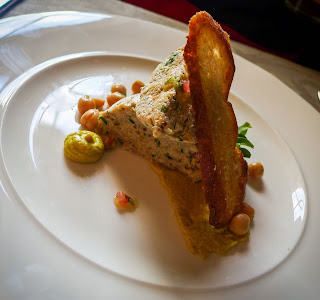 His starter of rabbit compote was better, but underseasoned, the delicately flavoured meat overpowered by the accompanying mustard. 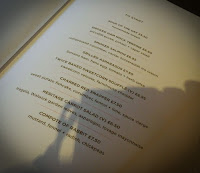 In short, it was a frustrating meal both to eat and write about: they’re doing a lot of the stuff here that I bleat on about, from making their own (very nice) bread and growing their own fruit and veg to offering an imaginative menu that majors on classical preparations with original twists. I’d probably advise them to lose an ingredient or two and focus on seasoning, but I’d certainly like to return to find out if these niggles were a one-off. 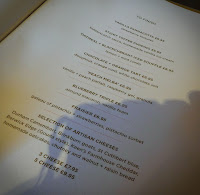 I suspect they might be and that on another day this place would have won itself an extra star. Do try it out and let me know what you think.

Service was great, from an enthusiastic and enviably fresh-faced team. The wine list has length and depth and shows the vintages, which should be obvious, but isn’t always. Chamuyo Estate Malbec and Mas Oliveras Tempranillo were both good options by the glass. 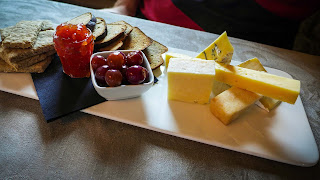 We finished with a plate of local cheeses, and then a stagger round the grounds of this listed building, perched near Hadrian’s wall. 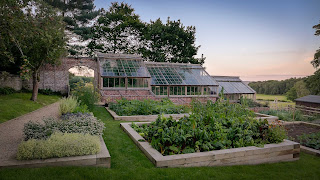 We stumbled upon a perfectly kept walled kitchen garden. I admired their tomato plants and onion crop as the swallows darted through the trees in the end of day stillness. It was all a bit gorgeous and calming. We made friends with a local cat.

“It’s flipping lovely out here. Shame about in there,” said my friend, nodding towards the glitter-fest we had just left. We got in the car and scooted back to Newcastle, leaving this singular interpretation of boutique luxury behind us.