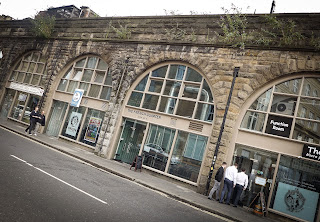 
Despite the fact that almost every decent chef in the world cut his or her teeth on basic French cooking techniques, and despite the huge numbers of Brits every year who jet off to holidays in the Dordogne or the South of France, I’ve always thought it a bit odd that Britain has so few real French restaurants.

Plenty of high-end gaffs are sort-of French of course, what with their extensive wine lists, long-reduced sauces and occasionally terrifying service, but that’s not what I’m thinking about. I’m talking platters of meats and cheese reeking of farmyards, with bread and good wine. I’m thinking of simple, satisfying dishes such as pot-au-feu, choucroute and properly made coq au vin or boeuf bourguignon. I’m talking real French food, like you get all over France. And which I love.

Is it some kind of oh-so-British reverse snobbery, or is it a lack of good ingredients, or sufficient skill and time in the kitchen? I guess it’s a lot less hassle to open up some half-arsed “Italian” or “Asian” place, slinging duff pizzas, gloopy sauces and similar crimes against decency. Or maybe it’s the recent but pervasive suspicion that French food isn’t what it was, that these classic dishes have kept it mired in ossified tradition (a view which, on the whole, prompts me to exclaim “C’est des conneries!”).

Whatever. Suffice to say I was more than excited to learn that Hexham’s reliably good Bouchon Bistrot is no longer the region’s only thoroughly francophile restaurant. The fabulously named Cedric Boc-Ho and his partner Catherine Metcalfe have opened up The French Quarter in the railway arch that used to house the awful Sausage Emporium.


As I waited to meet a friend after work, seated next to a cute bicycle, sipping a nice Loire Sauvignon and listening to the drippingly Gallic jazz of Paris Combo, I really hoped this place would be good. For the most part, it was better than that. 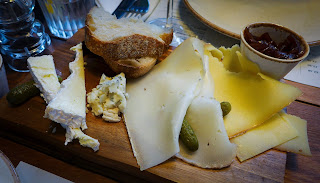 A platter of cheese found classic varieties such as Roquefort and Comté in fine condition, especially the former which was assertively, almost violently salty. Pain à la tomate was a joy, serious sourdough smeared with unusually full-flavoured tomatoes. 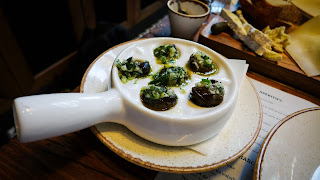 I ordered escargots, partly to freak out my friend, who is squeamish in such matters, and partly because I love the meatiness and garlicky thrum of a good snail. These were excellent, tender specimens swimming in butter that was packed with the good stuff. 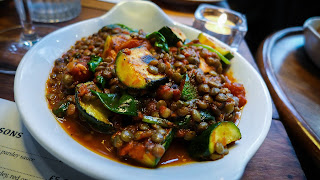 Vegetarians are particularly well catered for. A simple dish of courgettes and puy lentils in a tomato sauce was perfectly delicious, a demonstration of the magical impact that correct seasoning can have on more mundane ingredients. 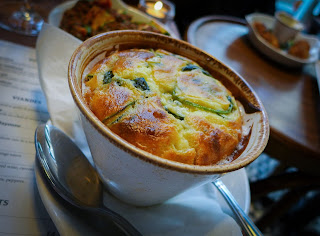 A cheese and spinach soufflé on the other hand was just dreamy, somehow dense and light all at once, the strands of fresh green just about enough to prevent the eater slipping into a silent but happy coma. 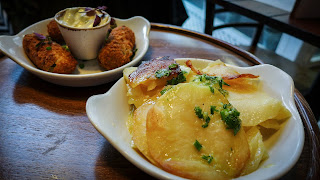 Gratin dauphinoise was less spectacular, but still the best I’ve eaten in a restaurant for some time. 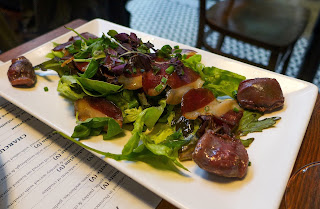 Meanwhile, back in the land of flesh and guts, I was quite smitten with a typically French “salade Périgourdine” of duck gizzards and ham. The former were so riotously full of flavour, I urge you to seek this dish out. More ham came by way of croquettes, which were crisp on the outside and steamy within, which is to say pretty much on the money. 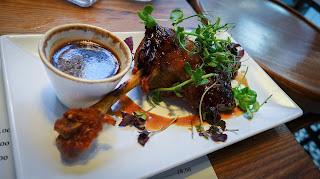 The only real savoury mis-fire was a portion of confit du canard which, weirdly for a leg of a bird having allegedly been cooked in its own fat, was pretty dry, lacked crisp skin and came with a sauce that was so sweet with honey it tasted like throat lozenges. 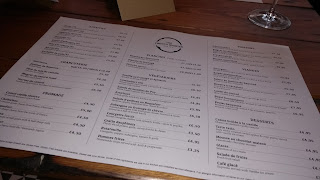 If this sounds like a crazy amount of food, you should know that they’re doing tapas size plates, which is great as I could happily order anything and everything from this menu. The same goes for the wine list, which is an all-French selection of real delights, reasonably marked-up. By the glass, I especially enjoyed a densely savoury 2003 St Emilion from Chateau Grand Lartigue. Vintages are displayed (hurrah!) and measures of as little as 75 ml are available.

Service was first rate, and Mr Boc-Ho certainly knows his vines, with a WSET level 3 lapel badge to prove it – do ask him for a recommendation. 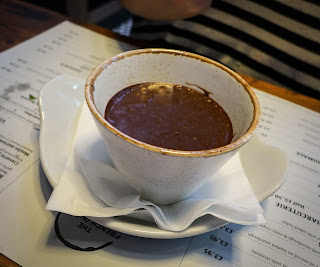 Desserts were half good and half total duff. A chocolate mousse provided further evidence that the chef here knows how to deal with an egg, being luscious, rich and decadent but not overly claggy or heavy. 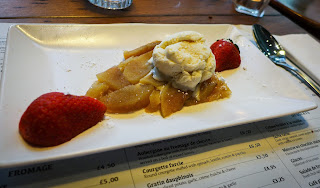 On the other hand, to call the pale triangle of floppy, wan pastry topped by sad slices of apple and no discernible caramel a ‘tarte tatin’... well, I’ll politely suggest a new recipe is acquired, and leave it there. If you want an authentic tarte tatin in the North East, you still have to head up the A69 to Bouchon Bistrot – it’s really worth the trip. 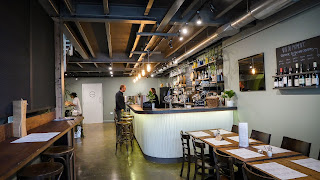 That one dud, however, didn’t dampen my enthusiasm for this lovely new restaurant which has been tastefully kitted out with bare wood and calming greens, neatly branded and ably staffed by nice people who clearly know and care about their game. It’s an all-day kind of place in the best sense of that phrase; you can come for coffee in the morning, a light lunch or a blow-out dinner. The food is very fine, and who knows, it may improve further once they really get into their stride.

We left feeling a good deal better about the world than when we sat down. It’s amazing what a really good meal can do for the spirits. I wish them well with this venture; hopefully more people will be into French food than were into those sausages. They ought to be. Bonne Chance, and Chapeau!