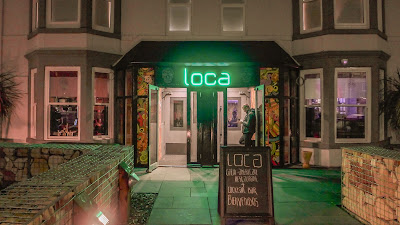 
As the rejuvenation of Whitley Bay continues apace, it’s turned into a town of contradictions. For every lumbering hulk of a closed down sea-front hotel, a minimalist craft beer bottle shop pops up. For every gorgeously restored Spanish City dome there is a hyper-grim bricks and neon Premier Inn and Beefeater. A walk through the town centre finds zeitgeisty shops and restaurants cheek by jowl with the naff and the knackered.

It seems apt then that our meal at Loca, a “Latin American” newcomer on South Parade, should have been so full of contrast in quality and variable service.


The evening started at that bottle shop, Nord, which is itself worth a mention on account of the tremendous selection of libations in their fridges. I’m starting to feel the same way about craft beer as I do about popular music: as time goes on I recognise fewer and fewer of the names.

On a Saturday night, Loca felt more like a bar that happened to serve food rather than a restaurant. There was a lengthy list of cocktails, a DJ, a lot of people and a doorman to keep out the rabble. They’re clearly trying to create a buzzy party atmosphere and it seemed to be working. If you like to eat in peace, this place is not for you.

The menu is divided up strangely. There are a bunch of tapas, to be followed by something from a list of either “Authentic Dishes” or “Legendary Favourites”. We debated the relative merits of both before deciding to dine authentically rather than legendarily. I guess you can’t have it all. 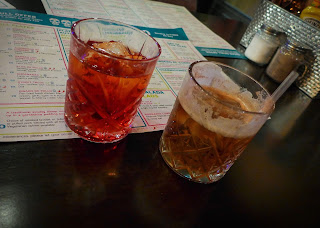 It took around fifty minutes for any food to show up, by which time a second round of Negronis had been put to use and we badly required non-liquid sustenance. The situation was scarcely helped by occasional free shots of frozen daiquiri being administered by waiters. I’d rather have had a nice bread roll. 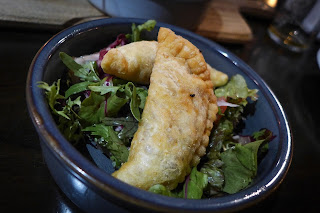 The tapas varied wildly between being really quite good and powerfully inept. Lamb empanadas were closer to the former, sporting decent puff pastry around nicely spiced and seasoned innards. 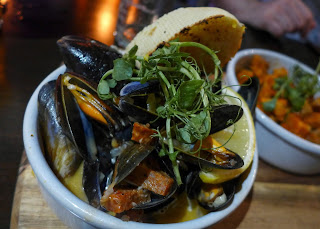 Mussels and chorizo were also perfectly good, although needed more than one bit of bread to mop up the coconut-spiked sauce. 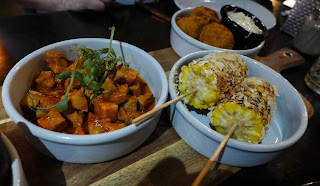 “Chicharonnes”, on the other hand were hopeless, dull and dry little cubes of tasteless protein that I only know were pork because the menu said so.

We had ordered chicken livers but instead got two bits of corn on the cob, which I’d have thought would be quite hard to get mixed up. The corn offered particularly poor value at a fiver a pop, but they removed it from the bill. I’d have quite liked those chicken livers, but didn’t want to wait another 50 minutes. 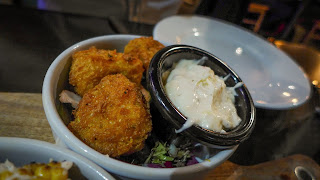 Elsewhere, cod croquettes were soft and soothing inside while crisp outside. They describe the accompanying mayo dip as “zesty”. I’d say “emetic”. Avoid. 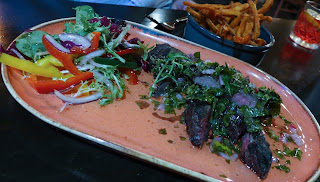 Mains were another mixed bag of treats and trials. A sirloin steak with chimichurri, that tingly Argentinian sauce of herbs and vinegar, was right on the money. The meat was well charred, cooked to medium as requested and the sauce full of life. 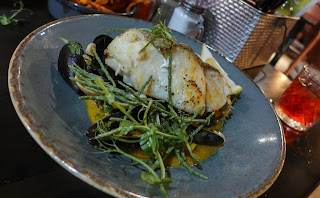 Similarly, a whacking lump of pearly cod was sympathetically cooked and served on samphire and a well made sauce of clams and mussels. 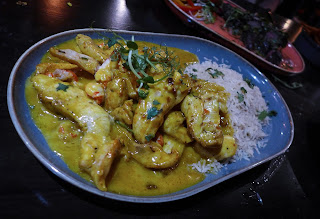 On the other hand, my xinxim chicken - a Brazilian dish favoured by none other than Pelé, somewhere between a korma and a satay - featured an awful lot of bland, dry chicken and dull rice. I don’t think the man from Santos would have been especially impressed with Whitley Bay’s interpretation of his national treasure.

As the meal wore on, it became harder and harder to flag down a waiter – unless you happened to be sat at one of a number of tables of enthusiastic laydees. Funny that. While his colleagues got their flirt on, one poor bloke was left with half the restaurant to serve, which he attempted gamely and with good grace. By the time we’d ordered puddings it was clear I’d be missing the last Metro. An apologetic text to Mrs Diner was followed by the arrival of a triumvirate of really pretty decent puds. 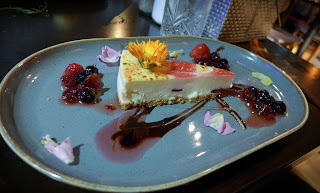 An enjoyable cheesecake benefitted from all manner of edible flower arranging. 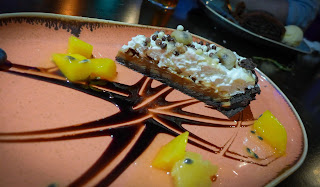 Meanwhile my cookie dough pie was smutty but fine. 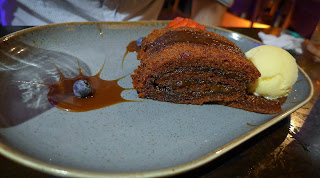 A caramel roulade looked a bit like the swiss rolls we used to turn out in Home Economics classes, but was certainly edible.

I have to confess that by this point we were pretty thoroughly refreshed, and I can’t help wondering if that wasn’t the whole point of the slow service. Maybe they fill up their customers with booze so they might not notice some of the less successful dishes. If that’s not the aim, they seriously need another pair of skilled hands in the kitchen and one or two out front who are more focussed on bringing food to the tables than admiring the talents of the clientele.

This place is a puzzle. Not just the terrible service, which masks any talent there might be in the kitchen, but there are also some bewildering things on the menu, such as as the Sunday Dinner Burruito [sic], “a traditional sunday dinner wrapped up in a yorkshire pudding burrito”. Yikes. Yours for a tenner. 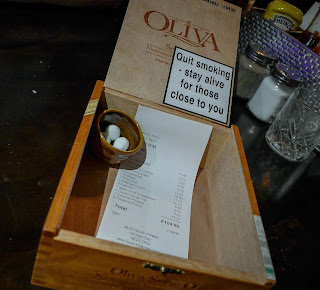 Our dinner cost about £35 a head, although it would have been much cheaper if there’d have been less time between courses for drinking. It feels like Whitley Bay’s past, present and future are all doing battle right here in this very restaurant. It makes for an entertaining, if not altogether tasty experience. I heartily recommend it from a sociological point of view. From a gastronomic one, less so.