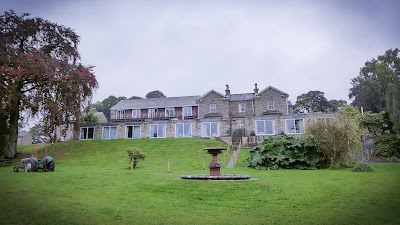 
This time of year, Mrs Diner and I love a long drive into deepest Northumberland. Any season is good, of course, but, as the greens turn to tans, bronzes and ochres, an extra dimension is added to the splendour, particularly in the North Tyne valley.

As we rode the switchbacks of the A68 through a grizzly morning, the lack of a visible horizon only added to the mystery and beauty. Gawping at scenery is hungry work. Just on the other side of Bellingham, as you head towards Kielder, is the sprawling Riverdale Hall, where we planned to take a restorative lunch.


But before that, a rare bonus: they have a dinky heated pool. If swimming at noon was good enough for Byron and Trelawny, then it’s certainly good enough for me. We arrived in the hotel bar carrying sharpened appetites and more than a whiff of chlorine. 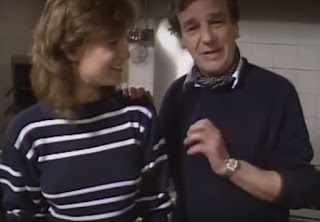 On the hotel’s website there’s a video of chef Iben Cocker preparing a dish of pheasant in mead sauce. She’s with the genius that was Keith Floyd, filming for one of his TV shows back in 1988. Thirty years on, Iben Cocker is still the chef here, and I was hoping for a similar game-led feast. Sadly it was not to be. 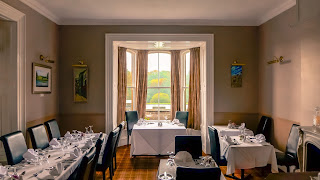 Estate agents would tactfully describe the bar and dining rooms here as “requiring some updating”, and the same goes for the menu. 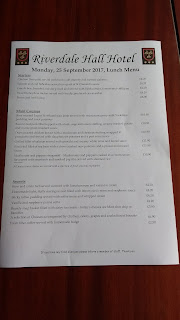 It is a collection of solid staples that, whilst not raising any pulses, at least offered the possibility of a hearty post-swim repast. 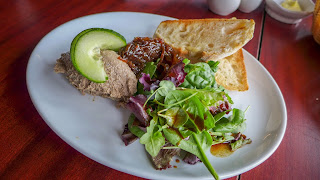 Neither starter was the best version of itself. My chicken liver pâté was grainy and lacked any depth of flavour. It needed more seasoning, a touch of brandy and to have been pushed through a sieve. Its Brown Ale chutney was alright, if a touch sweet. 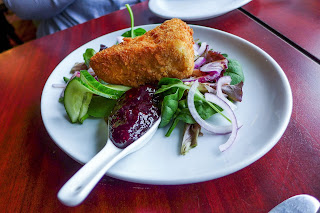 Mrs Diner’s breaded deep fried brie managed the rare trick of tasting of very little, save for the scalding oil from which it had been retrieved. It arrived with a large spoon of blackcurrant, tomato and chilli jam that was wildly over-sweet. Both starters came with salads that were, like the natives of the Bigg Market, insufficiently dressed. 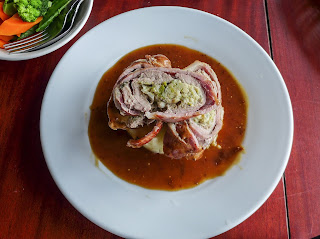 My main course offered up the one savoury highlight of the day. Roundels of pork fillet had been kept moist thanks to an old-fashioned but tasty stuffing of leeks and sage, and were well seasoned on account of their thick bacon cladding. The whole business was perched on a hillock of passable mash and surrounded by a moat of mustard sauce that I thought had the fruity tang of HP about it, which should not be taken as a complaint. 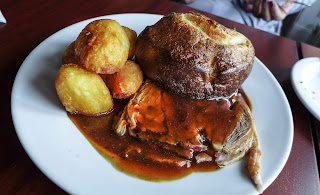 Mrs Diner’s lamb was basically Sunday lunch on a Monday. I’m always been a touch suspicious of leg of lamb served in thin, neat slices. Perhaps the chef just has sushi-grade knife skills. I’m also dubious about roasties that are crisp, yet don’t really taste roasted. I can’t say for sure that a deep fryer was employed in their preparation, only that it tasted like it might have been. The Yorkshire pud and gravy were, I’m guessing, up to the standard that one might expect from a Toby Carvery. Toby might even have enjoyed them. I didn’t. 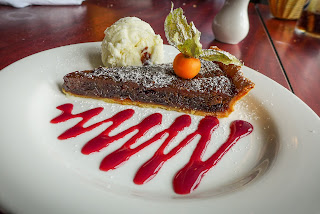 My dessert was sufficiently good to earn the restaurant a second star pretty much all by itself. Nicely baked pastry contained a rum and raisin filling of buttery heft and boozy depth. The accompanying ice cream doubled down on the rum and raisin theme, adding yet more Carribean cheer. There was a squiggle of pointless red sauce on the plate and a physalis garnish – I’m sure these clichés will have impressed someone out there. 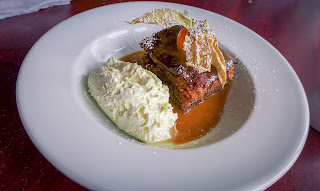 Mrs Diner’s sticky toffee pud won bonus points for having dates in the recipe, but immediately lost them for being adulterated by the flavour of ginger.

I have a bit of a soft spot for independently run Victorian-built hotels. They need support, not brickbats. However, there’s often a link between such establishments and the kind of unimpressive food that gave Britain such a bad culinary reputation, which has taken us decades to emerge from. I’m afraid this lunch at Riverdale tasted as if that emergence had never happened.

There’s nothing wrong with old-fashioned cooking that is designed to comfort rather than excite, but only when done well. For example, the vegetables that arrived with our main courses were strangers to butter and hadn’t been seasoned. If a chef doesn’t take the time to prepare simple things correctly then I can’t be expected to say nice things about them in print. 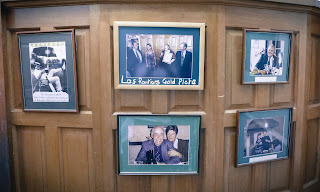 Riverdale’s website trumpets their award-winning restaurant. The award in question appears to be a “Les Routiers Gold Plate” (I’d no idea either), and it is “the only restaurant in Northumbria to receive this accolade”. In fact, any UK establishment can get a Les Routiers listing by paying a subscription – the “gold” level costs more. Those Les Routiers’ salesmen don’t appear to have had much success in the north east – there are only three entries on their website in the entire region, including Colman’s Fish and Chips and, mysteriously, Brocksbushes Farm Shop. I see that Riverdale Hall is no longer on the site. 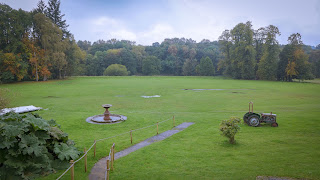 If this food gets enough bums on seats to turn a profit then good luck to them – we need independent hotels. Sadly, it doesn’t add to the total of decent eateries I’ve recommended in the vicinity of Kielder, which currently numbers just one (The Pheasant Inn). Given the multitude of visitors who now come to peer into the cosmos, as well as those working up an appetite doing outdoorsy things, this is shameful. And as for me and Mrs Diner: next time we’re taking sandwiches.