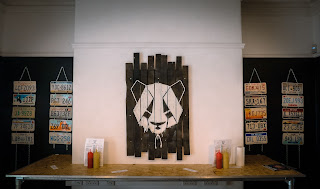 
Let me tell you about how I hoped this review would go. I really wanted to write about how the "American-style vegan diner" food at Grumpy Panda had really turned my head; how it had blown my previously held prejudices about things pretending to be meat right out the water.

I’d have liked to tell you how the texture and the taste of their “chikin”, “baecon” and “cheez” were, as Larry David would say, pretty, pretty, pretty good; how much we’d enjoyed lunch and would definitely be going back.

I wanted to say all these things because, for all manner of ethical, ecological and practical reasons, a diet based on the consumption of industrial grade meat and meat products doesn’t seem sustainable or desirable for this world in the long run. I don’t have anything like the word count here to get into this whole complex area, but suffice to say I’ve given it some thought.

That's why anywhere serving delicious food for people who want to follow a vegan diet - some of whom are actually friends of mine! - is absolutely fine by me. Especially in Gateshead, which could do with a few more interesting restaurants.  The only problem is, Grumpy Panda isn’t - or certainly wasn’t when we ate there - that thing.


Nothing we tried hit the spot, and a fair amount of it had the odd, unsatisfying textures and tastes that I’ve come to associate with meat substitute products over the years. But just in case you still think I’m only here to have a pop at vegans, or vegan food, from behind the safety of a keyboard, let’s talk about chips and coleslaw. 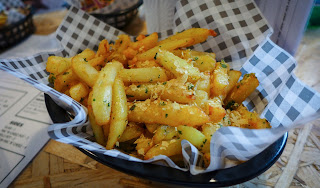 There is absolutely no reason why chips and coleslaw can’t be fantastic in a vegan restaurant, but Grumpy Panda’s told a sad story. Catering bags of frozen fries seemed to be getting cooked in domestic reduced fat fryers. The result was a disconcertingly flaccid chip, incapable of providing any satisfaction. Our “San Fran” fries were supposed to come with garlic chimichurri, so I was expecting a vinegar-spiked herb dip, but what we got was a scattering of garlic flakes and the odd fleck of dried - I think - parsley. That ain’t no chimichurri, pal.

The coleslaw was lazy, consisting of simple chopped veg bound in a meagre quantity of tasteless lubricant. Vegan mayo tends to lack in the mouthfeel department, but hey, that’s fine: you can still make a great vegan coleslaw with fresh herbs, toasted nuts and seeds, good seasoning and a generous dose of citrus. This had none of those things. 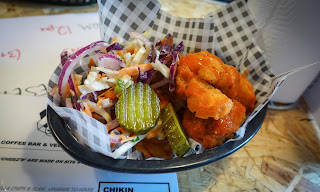 Some of that coleslaw turned up next to a portion of cauliflower “wings”. Plus points for the veg itself being nicely al dente, but the coating lacked any crispness at all, and slid apologetically off. They need to find a way of getting the batter to stay put. 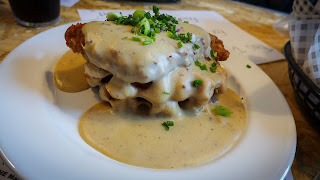 On to the pretendy meats, and things slunk a notch or two lower. My “chikin “n” waffles” featured a waffle so chewily dense it had its own gravitational field. I had to really give it some elbow grease with knife and fork to hack the blighter up. The chikin itself was pretty dry with an odd, tight texture, and although quite strongly seasoned, had no inherent flavour for the seasoning to bring out in the first place; it was a bit like nibbling on a stock cube (what, you never have?). The white sauce that covered this lot wasn’t altogether bad, but needed some nutmeg, bay and pepper, I reckon. 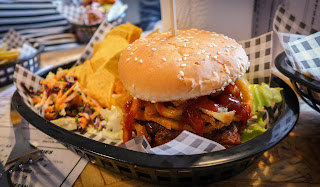 We tried two of the burgers. One, a special, featured the same chikin fillet on my dish and another had fakey beef with crisp onions and bbq sauce. The chikin one came topped with cheez, which I paid close attention to on account of my previous experiences with vegan cheeses being absolutely harrowing. This didn’t taste bad, but only as it didn’t taste of anything. 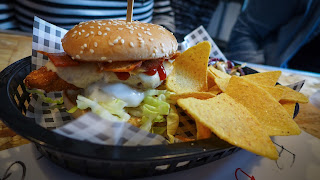 The “beef” burger inspired three words: dry, underwhelming and unsatisfying. Both Mrs Diner and the pal also in attendance reported feeling a bit squiffy and, well, grumpy after our lunch; none of us enjoyed smelling of frying as we went about our day. I’m happy to walk around reeking of what I just ate if the enjoyment gained from so doing is worth it. This wasn’t. 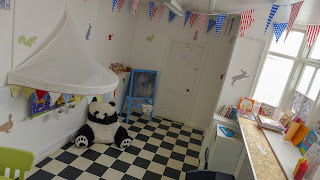 Grumpy Panda is set in what appears once to have been a residential property, surrounded by law firms, solicitors and an MP’s office. It’s an unusual building for a restaurant, but they’ve done a good job of creating a diner feel inside. Their branding is very neat and there’s an excellent small kids play area downstairs.

Both waitresses that served us were absolutely lovely, as indeed - apart from refusing to divulge how he goes about turning wheat gluten into seitan - was the chap on cooking duty, which doesn’t make this especially fun to write up, but hey ho.

No doubt I’ll get the usual accusations after publishing a bit of a stinker: “How dare you, you’ll ruin their business!”, people yell on Facebook.

Just to be clear, I wish Grumpy Panda every success and hope their business thrives. I just don’t think their food - vegan or otherwise - is any good.