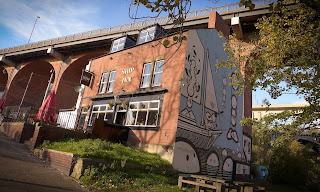 Alright, vegans: this one is for you. Except that, actually, it’s for everyone. Let me explain.

It has not been easy to find somewhere in the North East to heartily recommend to those following a strictly plant-based diet. There was the Painted Elephant, but it closed a while back. In spite of their apparent popularity, The Bohemian and Grumpy Panda both wound up with 1-star reviews, thanks to their over-reliance on pretendy meat products which tasted bad and had weirdly grim textures. Surely someone could put a menu together using actual vegetables, beans, legumes, seeds and all the rest of it, and still make it taste nice? Well, they have now.

Make no mistake: The Ship Inn isn’t just for the flesh-shy. Mrs Diner and I, committed carnivores both, enjoyed a recent lunch there as much as we have any meal for quite some time. There was talent, invention, colour and variety on display in every dish we tried. The meal was a pleasure.


But what’s this food doing in a pub in Ouseburn? In my personal experience, The Ship was always where you went to get a drink on a bank holiday when the bar at The Cluny was impenetrably rammed, and that was about it. But no longer.

New owners took over the place a couple of years back, and, frustrated at not being able to find anywhere in Newcastle to eat vegan food with a pint, decided to make that place themselves. 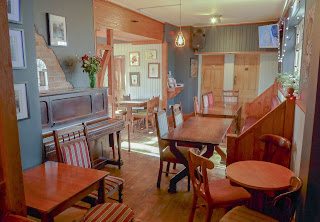 It’s not just the menu that looks different to how I hazily remember it. Inside it’s now all muted tones of paint punctuating assorted tones of wood. There’s trendy lighting and really interesting art hung on the walls. It’s still recognisably a pub, just a very cool, discerningly put together pub. 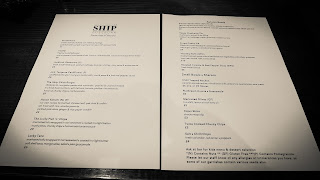 That good taste stretches to the menu, and how. They don’t do starters as such, so we basically ended up with four main courses to plough through in order to be able to convey to you the standard of the cooking. No, really, it’s fine; you’re welcome. 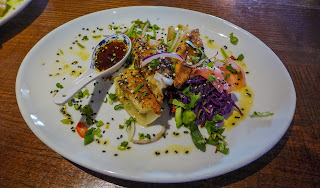 First up, a plate of smoked tofu pot-sticker dumplings were a triumph. The bean curd filling had real depth of flavour and perfectly gauged spice, the dumpling shells alternately crisp and soft, as they should be. Pickled ginger and red cabbage were all crunch and tang, while chopped coriander and a blizzard of black sesame seeds made the plate look pretty. 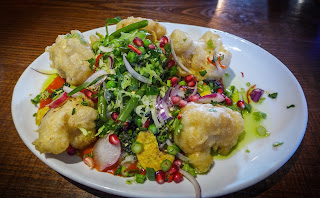 Jerk tempura cauliflower was almost as good. The veg itself was nicely al dente and, while the batter was more chip shop than tempura, it was crisp, moreish, and didn’t slide sadly off the cauliflower as we have witnessed elsewhere of late. The “jerk” element was a spiced red pepper purée that could have had a bit more chilli ting, but was still sunnily delicious. As was an unruly mix of rice and peas, plantain chips, green beans in the centre of the plate, with the whole effort scattered liberally with scarlet nuggets of pomegranate seed and an emerald coriander oil. 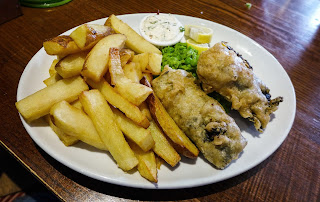 Their take on fish and chips was nifty. Take a wodge of firmish marinated tofu, wrap in nori seaweed, then batter and fry. Crisp on the outside, soft and humming with the ocean on the inside. It’s not, clearly, fish, but here’s the thing; it was really tasty in its own right. The chips were absolutely bang on too, hulking doorstep things with good potato flavour.

“I’m just not missing meat here at all,” Mrs Diner noted, looking a bit confused as she enthusiastically waved a fork, like a wand, over our packed table. “It’s all just delicious”.

I don’t know who’s cooking at The Ship, but I suggest the owners try to keep hold of them. The range of dishes is genuinely impressive. I’d like to try their “proper pastry” pie, their balti and the jackfruit shawarma, but those will have to wait until next time.

I was impressed with the range of ingredients used - sometimes on just one dish - and the techniques displayed. It felt - and this is absolutely critical - that whoever was cooking actually likes to eat this stuff, and understands how to make vegetarian food exciting. More power to them. 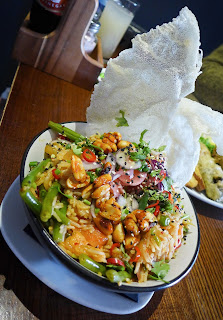 Our final savoury dish, the house kimchi, was a whopping big bowl of sour and tangy fermented pak choi and radish, stir fried with rice and unusually delicious peanuts which had had something done to them I couldn’t quite figure out. On the side, a big mainsail of a rice paper cracker, like a super-light poppadom. This final dish defeated us, so we took the rest of it home for later. Tellingly, it was as delicious heated up as it had been on location. 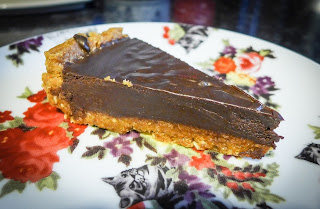 Also purchased for later consumption was a slice of tart, which sported a gloriously un-muted chocolate filling, encased in a nice biscuity base. While finishing it off, I had to remind myself that all this excellence is being produced in a pub. And it still is a proper pub. There’s cracking beer from Allendale and Anarchy on tap, some clearly labelled as vegan, and a first-rate range of spirits. There was also one of the coolest soundtracks I’ve eaten to for some time.

So basically, I loved the place. The dishes weren’t especially refined, but they tasted great and that’s at least as important. They might want to think about offering some as starters, if only to increase the spend per head, but that’s a tiny niggle. It’s currently very good value. A £9 main course will feed one person generously.

If you’re vegan, I can only assume you know about The Ship already. If not, you really need to check it out. The rest of us should too. Generous portions of seriously tasty food, prepared with thought and care, that just happened to contain no meat or animal-based products, resulted in a meal that made me feel really good. And that, as far as I’m concerned, is all that ever matters.