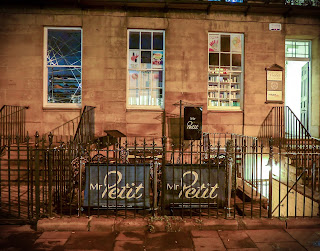 
It moves crazy-quick, this restaurant biz. I could swear it was only 5 minutes ago that I was reviewing this same place. But now Al Buco, with its homely southern Italian stylings, has closed and exited stage left, to be replaced by Mr Petit, which is something else entirely. 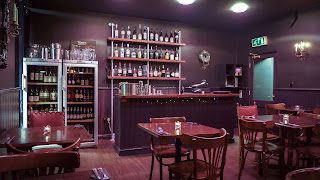 Having skilfully dodged my way through the onslaught of tat in Newcastle’s “International Christmas Market”, and just about managed not to break my neck in the icy conditions - don’t you just love the city in December? - this restaurant’s newly dark embrace was calming. The previously whitewashed walls have been given a lick of what I think is a heavy shade of purple and were dimly lit, with tealights on each table. So: apologies for the moodiness of some of the photos. 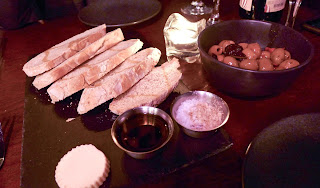 Where previously there was an open kitchen, a wall has been erected, making the room feel smaller, and more cosy. Tables were mostly set for twos. It felt like a tucked away continental bistro, and I quite liked it. 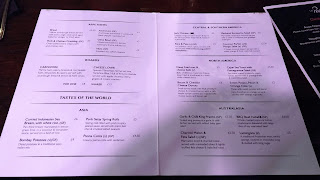 The food offering is one of those that you would assume has no chance of working: a sort of globe-trotting tapas, with the menu split into sections for Asia, North America, Central and Southern America, Africa, Australasia and Europe, each of which gets four dishes, including a pud. This makes ordering a dizzying if enjoyably comedic experience. Does Indonesian Curry go well with Mac and cheese balls? Is jerk chicken improved by the presence of dauphinoise potatoes? Only one way to find out.

Determined to circumnavigate the entire globe in one evening, if only to avoid any accusations of xenophobia, we hit up each zone for at least one dish. 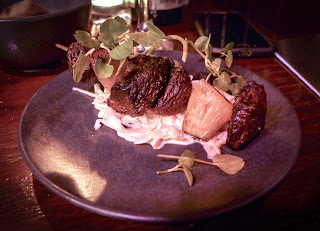 I encountered some real turbulence in Australasia, where my BBQ beef kebab included two leathery-dry lumps of a cow that had died in vain. I checked the menu in case I had mistakenly ordered beef jerky. I had not. 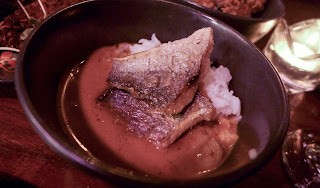 I moved swiftly on to Asia, where a dish of curried sea bream was better, because it couldn’t not be. Two well seasoned and crisp-skinned nuggets of fish sat on a simple curry sauce that tasted mostly of coconut and turmeric, and some plain rice. 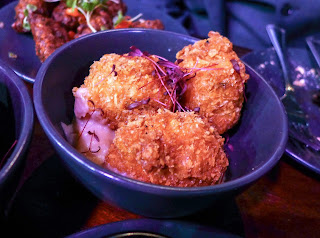 My friend, a vegetarian, had noted that there was an awful lot of deep-frying on the menu, including some things that you would not normally expect to take a fatty bath. Like mac and cheese balls. 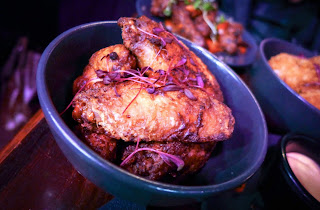 Jerk chicken should really be grilled, preferably over coals, in order to attain that lovely intermingling of spice and smoke. Nevertheless, the wings served at Mr Petit were at least tasty, their brining having helped them stay moist and the sauce having a moreish tingle to it. 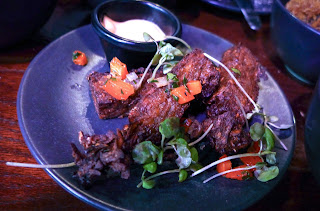 Now, I can’t be 100% certain that the dauphinoise potatoes had been chopped into wodges and deep fried - it was really pretty dark in there - but they sure looked and tasted like they might have. Either way, they weren’t good. Dauphinoise means creamy and yielding, with perhaps just a waft of garlic; it means decadent and it means supremely satisfying. It does not refer to a stiff, dark rod of something that can be dipped in mayo, which these came with, as opposed to the advertised “veg jus”. 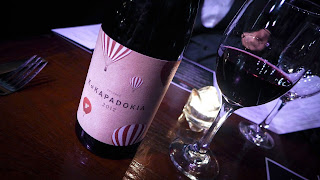 If this Lonely Planet style approach to catering was providing mixed results on the food front, I should note that it has produced a short, but excellent wine list. Alongside the usual Pinot Grigio and Rioja are some far less predictable numbers, including a Lebanese white and the Kaya Kapadokia Turkish red - like a beefed-up French Gamay - which we enjoyed very much indeed. All are marked up unusually reasonably too, some less than twice retail, and we were advised that pretty much everything is available by the glass.

Which makes me wonder: what kind of restaurant this is trying to be? If, taking respite from a hectic shopping trip, you popped in for a glass and a couple of (the better) plates, you’d leave having been well rewarded. If, like us, you order enough to feed two gluttons, not so much.

Part of the problem was that everything arrived at once, so by the time we’d finished one dish, another was rapidly losing temperature. 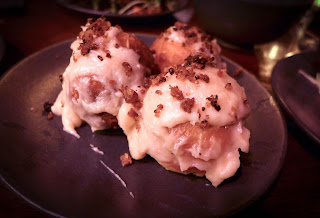 I can imagine that my bacon and cheese donuts (didn’t detect the maple syrup centre, but hey ho) would have been more enjoyable having been just retrieved from the fryer than they were by the time I got round to them.

Likewise my friend’s crispy nut roast balls. These were also alleged to come with a vegetarian jus, whereas the sauce they sat on tasted a good deal more like bbq than any jus I’ve come across. No matter; its tang was much needed, and it actually had a fair depth of flavour to it. 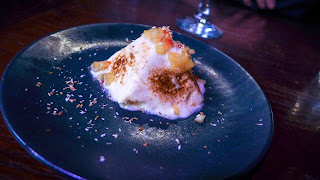 We only tried one dessert, a coconut parfait (Central and South America). This arrived as a small pyramid that, despite apparently receiving a bit of a blowtorching down its sides, tasted sweet and bland. It was supposed to arrive with a thick cold chilli custard, which I was unable to locate. 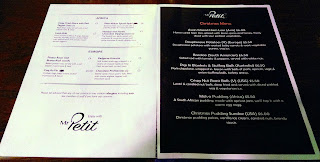 It’s awfully difficult for one kitchen to pull off a menu like this and I’m afraid that, on the evidence of our visit, Mr Petit hasn’t managed it. Matty Stephenson is the Executive Chef for St Camillus Leisure, which has taken on this site along with what used to be The Bottle Shop, (next to Dance City, now renamed The Giraffe Lounge). He’s a good cook, but he wasn’t in the kitchen the night we went. Whether this menu, which featured too much deep frying, not enough finesse, and apparently quite a few missing ingredients, would have tasted better in his hands, I’ll never know.

We paid just shy of seventy notes, including one bottle of wine. I really wanted to like Mr Petit, not just because of its speakeasy-noir interior and fun wine list, but because St Camillus Leisure is part of St Camillus Care Group, which is a charity supporting young people with learning difficulties. However, I can’t in good conscience recommend the meal we had. I think the menu needs tightening up and some dishes require new recipes. St Camillus has taken on two sites which have each seen the back of a number of businesses before them. I really hope they make a success of both, but I suspect they’ll need to rethink their food offering here first.

[Mr Petit's PR tells me that the owners are "distraught" by the fact that I apparently visited during a period when two of their chefs were off sick.  If any readers have been here recently and enjoyed a better experience than I did, then please let me know, either by posting a comment on this page, or by emailing me at secretdiner@secretdiner.org]