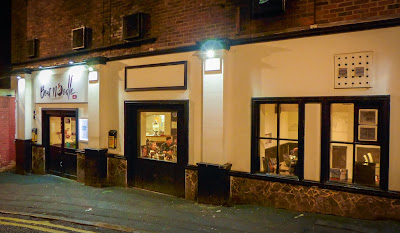 
Of all the improvements that Newcastle’s food scene has seen over the last year or two, one of the most welcome has been the emergence of some rather good Chinese and South East Asian restaurants.

If you want to waste your hard-earned cash on interchangeable meat in tangy gloop sauce then there are still plenty of those places hanging around, but there’s no need to any more:  from the Szechuan stylings of La Yuan to the hand-pulled noodles at Inoodle, via the ferocious jungle curry served at Thai House Cafe and the odd but effective combo of noodle soup and waffles at Meet and Treat, things are looking good on the Asian front. So it seems apt to sign off the year by adding another cracker to the list.


Boat Noodle occupies the chunk of Leazes Lane that was vacated when the excellent Chilli Padi moved to larger premises round the corner. Indeed, it’s owned and run by the same people, which augured well.

The menu at Boat Noodle is, to my eye, just a touch less broad, with more of a focus on dishes typical of Malaysia, the owners' land of origin. It is still an intimidatingly large and detailed laminated two-sider, full of wonderful and occasionally weird sounding things from which Mrs Diner and I struggled hopelessly to agree on a line-up. Defeated, we asked for recommendations, which turned out to be a brilliant idea. I recommend you do likewise. 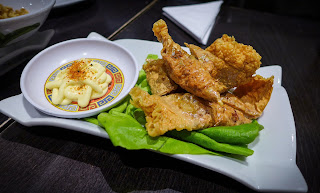 From a list of “snacks”, deep fried bean-curd rolls were eerily crisp and stuffed with a gamey, moreish paste of shrimp and who knows what else. These came with a generous squirt of Kewpie-style mayonnaise: I so love that stuff. Altogether the effect was of brilliant, cerebral junk food. 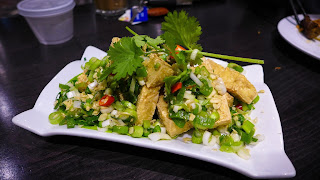 Ditto a plate of salt and chilli tofu in which the crisped eggy cuboids had been tossed with an addictive mix of scallions, birds eye chillies, coriander, salt and dried garlic flakes. This is a dish only to order if everyone at the table shares it or, failing that, if your guests have a radically diminished sense of smell. Mrs Diner fell into the first category. A simple dish done tremendously well. 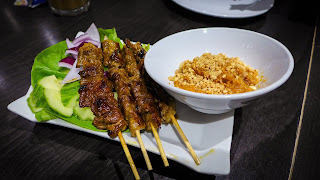 Eager for a taste of nostalgia, I ordered a plate of satay, which I more or less survived on when schlepping round Malaysia an embarrassing number of years ago. Boat Noodle offer not just the standard chicken version, but also beef and lamb. I’ve always found that lamb, with its strong flavour and generous fat content, stands up well to Asian marinades and char-grilling. This was the case here, with lemongrass and, I think, turmeric to the fore in the marinade.  The accompanying peanut sauce was both crunchy and complex. 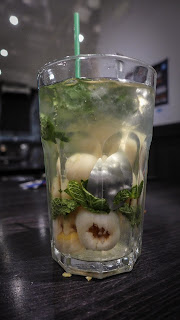 All this was washed down with first-rate iced coffees - properly made with condensed milk - and then a superb lychee drink made with a bunch of whole fruit, some syrup and, if I heard right, something called “coconut plum sugar”.  Anyway, whatever was in it, it was delicious and refreshing. There’s no alcohol licence and no card machine either, but the branch of Tesco bang opposite will sort you out on both counts. 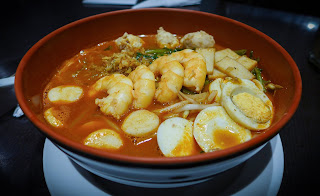 Back to our meal, and things were about to take a turn towards the flat-out brilliant. My prawn noodle soup had two types of noodle, sliced chicken, boiled egg, bouncy fish balls and much besides, but the true genius of the dish was in the stock. Untold hordes of prawns had lost their heads and shells in the creation of this liquor, which I was told involved four days of simmering. I can quite believe that: it was a shade of deep, toasted terracotta and and had a richness, depth and clarity like the finest of bisques. It came with a dish of sambal sauce, just in case you fancied cranking the umami-ometer up to 11. 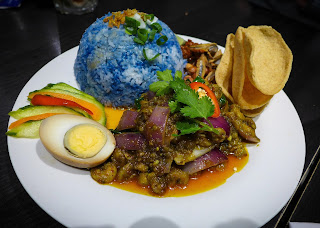 Meanwhile, Mrs Diner had been encouraged to try a special of Nasi Kerabu, in which a dome of blue rice - coloured with dried butterfly-pea flowers (also known as Asian pigeon-wings, or Clitoria ternatea if you’re botanically minded - yes, you read that right) - was served with a vast host of flavourings and garnishes including super salty dried fish, sweet pickles, lobster crackers, crisp onions, a bowl of seriously good chicken broth and a hearty dose of a sambal-based shrimp sauce that had more murkiness than a corrupt politician. This dish is typical of Kelantan, on peninsular Malaysia’s east coast, from where the flavourless but strikingly hued flowers that coloured the rice were imported. 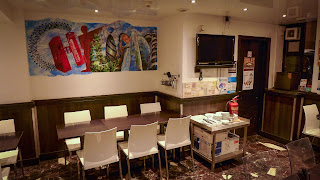 Boat Noodle, as with Chilli Padi before it, is simply decorated. It’s basically a café, whose tiny kitchen you have to walk past in order to find a table.  But it just happens to serve great Malaysian food. This is appropriate: some of the best meals I ever had in South East Asia were in distinctly unglamorous locations. No matter -  when the kitchen is kicking out gems like these, I’d happily sit on the floor.

Service was also brilliant. The manager gave us a thorough explanation of each dish before taking our order, and all the staff were lovely, including the chef who popped his head round the corner to check that we were enjoying everything. We were.

We couldn’t manage a pudding, which was fine, as there were none on the menu.

If you’re feeling a bit bloated and blanded out after the festive period, I can think of no better way of reawakening the senses than a dish or three from Boat Noodle. I’ll be back for sure. In the meantime, have a great New Year. May all your meals be delicious in 2018.