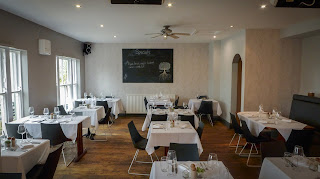 
One of the great advantages that computer games have over actual life is the Pause and Save button. Granted, the stakes are a tad higher in the digital world - I’ve never taken Newcastle United to the Champions League final, escaped from a violently mutated friend on an exploding train, or defended Rome against Barbarian tribes in the real world - but if I'd managed any of those things, I'd certainly have hit Save to capture the moment.

How many job interviews start brilliantly, before one curve-ball question catches you out? Plenty. Remember that girl, way out of your league, you were getting on so amazingly with before you tried a “joke” that came out really, really weird? Remember the look on her face?

Yeah: pause and save buttons for reality – bring it on. I’d have quite liked to have hit “Save Game” after our starters at The Cellar Door.


Everything up to and including that point was going swimmingly. The food, the room, the view, the wine and service; all lovely. I was starting to wonder how the place had sneaked under my radar for so long, and was beginning to compose a humble mea culpa to Durham, for not having directed its good people here sooner. And then, like the proverbial Dr Hyde, the rest of the food turned up and I got really confused.

So I’d like to go back, maybe order differently and see how it would have panned out. But I can’t. My brief is to judge every meal as a whole, not just the good bits. 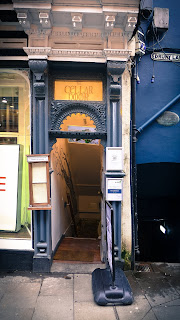 Blink, or look the wrong way for a minute, and you’d miss the entrance to the Cellar Door.

It’s on the left, as you stagger up Saddler Street towards the Cathedral. The restaurant is down a steep, narrow flight of stairs from which you exit to find yourself in a very pleasant dining room of light greys, wood floors, clothed tables and oodles of natural light coming from french doors. These look on to an attractive terrace which in turn has cracking views of Elvet Bridge and the Wear below it. 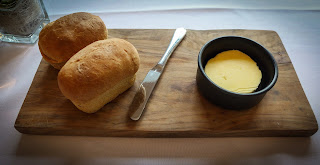 I ignored the Live Lounge-ish soundtrack – you can’t have everything - and tucked into some really excellent mini loaves of bread and butter. We decided to give both menus a try – the smaller lunch offering (three courses for £16) – and the à la carte. 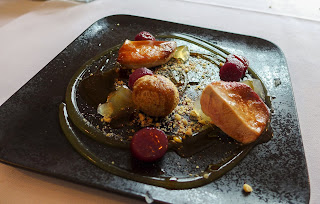 Between them, there seemed to be a vast choice (more of which later). From the pricier list, my starter of partridge was pretty first rate, featuring moist breast, a crisp bon-bon of flavoursome leg meat, pear poached in what tasted like mulled wine, a pear jelly and delicious cooking juices. Nicely balanced, clever stuff. 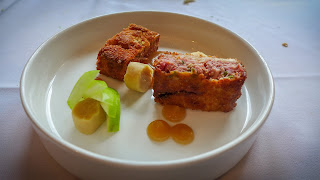 Mrs Diner’s starter, a riff on ham and pease pudding was similarly great. Crisp breaded oblongs of ham hock meat sat at jaunty angles to discs of cracking pease pudding and a few dots of something tangy, possibly a vinaigrette gel. A very tidy, modern take on a north east classic.

From an excellent wine list, with massive choice by the glass (Yay!), I was enjoying a delicious, ripe Pinot Gris from Alsace. The world was a happy place. And then… 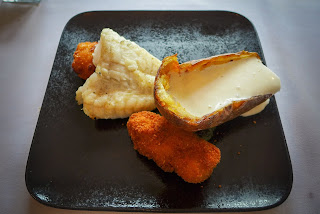 My main of monkfish featured a “baked potato espuma”, which I thought sounded like some cheffy fun. Unfortunately it turned out to be half a baked potato filled with what tasted exactly like frothed evaporated milk. Locking horns with the processed, sweet flavour of this aberration was a “caper jam” so full of lemon – preserved, I think? – it tasted like a cleaning product. Against this sheer madness, the poor old monkfish never stood a chance. 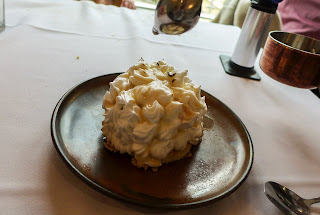 Puddings were not good either. My baked Alaska was a job for the Trades Description Act, as I don’t think it was baked at all. Instead, our waiter attempted to flambé it in brandy at the table. Seriously. This succeeded only in singeing a few of its peaks, leaving me with dense sponge, rock hard ice-cream and raw meringue to contend with. The idea should be to put the thing in a hot oven to set the meringue and soften the ice cream. I could have done better with a match. 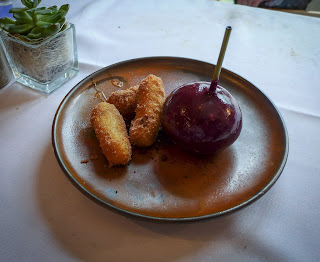 Mrs Diner’s toffee apple panna cotta was designed to look like an actual toffee apple, the problem being that getting a panna cotta to set as a sphere required so much gelling agent as to make it no fun to eat. Accompanying churros had a weirdly claggy centre, like they hadn’t been cooked quite long enough. 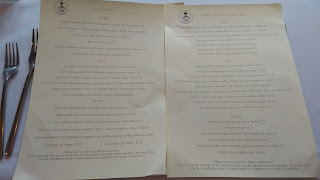 So, what gives? I can’t know for sure, but it does seem like this is a kitchen that needs to rein itself in a bit. Between the two menus, there were 13 starters, 15 main courses and 10 desserts. Quite a few, like my starter, were complex arrangements of 5 or 6 separate elements. That’s like leaving the foothills of ambition in favour of scaling Mount Bonkers. 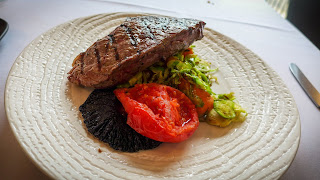 For balance, I should say that Mrs Diner’s steak main course (salt aged Hereford) was jolly nice, which sort of proves the point: this kitchen can do simple things well, as well as a few complex things, but maybe just not so many of them all at once.

Service was clued up and full of warmth. Apparently this used to be an Italian before the owners realised that Durham had plenty of those, but far fewer places offering creative cooking with good ingredients. I absolutely applaud this direction, but would encourage the kitchen to taste their menu - especially that radically bad Monkfish dish - and slim things down to make life easier for themselves, and a whole lot tastier, and less confusing, for the rest of us.