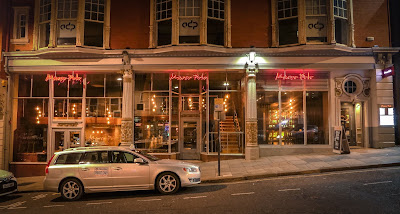 “Very good, slightly better than 20/20,” said the brisk chap at my opticians, as I tried on my new bi-focals.

As someone not in the habit of receiving praise from health professionals, this verdict came as a very happy surprise. Better than 20/20? That, as far as I was concerned, was practically a super power. I walked out feeling on top of the world, making a point of having a damn proper look at everything with my turbo-powered eye-glasses and fully expecting to get the call from Charles Xavier any minute. And then I sort of forgot all about it and got on with life, as you do. Until a couple of weeks ago.

“Christ, what font is that? I can’t read the bloody thing at all,” said my friend.

“Can’t be more than 7 point,” agreed Mrs Diner. “This is hopeless.”

Four of us were sat in Marco Polo, but while the other three hunted out their reading specs and switched on their iPhone torches to see better, I alone was able to make out the bill of fare. 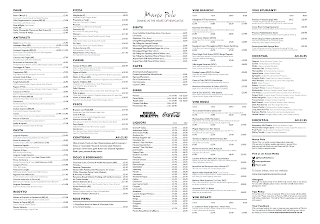 Seriously: whatever possessed them to squeeze every dish, wine, soft drink, cocktail and coffee they serve, not to mention their contact details, tips policy and mission statement all onto one place-setting sized piece of paper is anyone’s guess. Maybe it results in people ordering at random, which is good for stock rotation. Or perhaps the owners have a long-standing grudge against the visually challenged. Who knows. 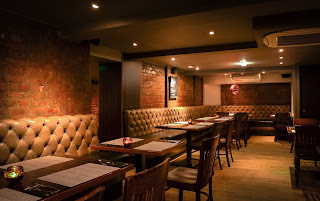 I was visiting Marco Polo for a review that is many years too late. I guess this place was, a bit like Tony Soprano, hiding in plain sight. It has been a part of Newcastle’s dining scene for as long as any of us could remember, but for some reason I've passed it by. Our waiter reckoned it had been in Dean Street since 1972, which sounds about right. The pressure, in a way, is therefore off: nothing I say is likely to radically stem nor swell the flow of punters to its door.

As a long-standing city institution, Marco Polo at least benefits from name recognition. But that doesn’t make the age-old question less worthy of the asking: is it any good? The quick answer is: occasionally. The longer one requires explanation.

The menu font may be tiny, but the offering is large, taking in pizzas, pastas, meat and fish dishes, with a long list of antipasti starters. There are plenty of Anglo-Italian standards, but also a few more interesting-sounding dishes. We ordered as many of the latter as we could fit on our table, then a couple more. Meanwhile we struggled to settle on a wine from a list that, unlike the rest of the menu, was rather short.  A Negroamaro tasted rough, a bottle of Primitivo rather better. But neither was special, and none of the wines listed their vintages. 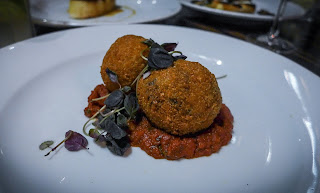 We'd ordered enough for a large Italian family.  Fried things were pleasant enough.  Arancini were filled with a deep braise of oxtail... 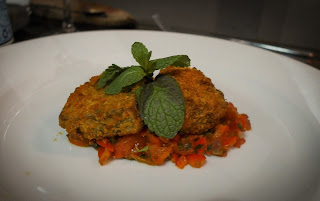 ...while breaded lamb shoulder was as full of flavour as you would expect from this nicely fatty cut, although the accompanying tomato and mint salsa was dangerously close to toothpaste territory. 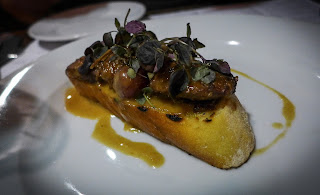 Chicken livers on toast with grapes and marsala was nearly very good, but the overcooking of the main event rendered it too close to school dinners for my friend and me. Chefs are always banging on about trying to evoke childhood memories with their food. This was the wrong memory for us. 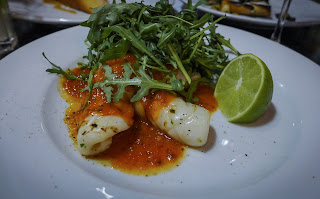 Chargrilled squid was a bit of a chew, and came with a chilli tomato sauce that tasted of spice and little else. 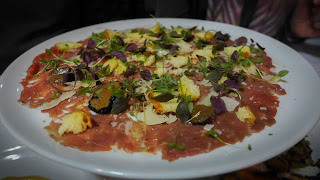 A plate of beef carpaccio looked very pretty, what with its confetti of micro-herbs, but was unbalanced, a trickle of truffle oil completely battering the other underpowered ingredients into submission. 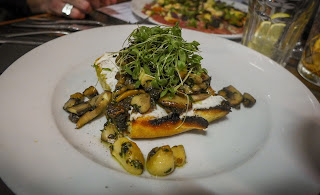 Mushrooms and ricotta on grilled ciabatta was, like most of our starters, pleasant but not special. This is generic Italian-ish cooking, certainly not distinctive enough to stand out from the crowd of good new restaurants that have arrived in the city of late. 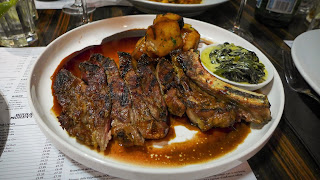 Best of the mains was a thumping great lump of rib-eye, cooked on the bone to medium rare. This benefitted from some really decent charring and seasoning, while the meat itself appearing to be of good, if not stellar, quality. Shame about the red wine jus which, whether by accident or design, tasted like it had a fair bit of stock-pot about it. 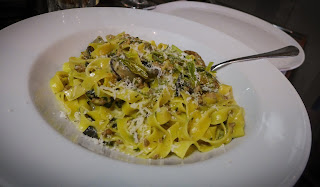 Also enjoyable was a plate of bouncy fettuccine with rabbit, its gentle flavour enhanced by a mascarpone sauce of leeks and mushrooms. Elsewhere, however, the wheels came off. 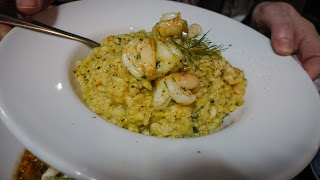 A crab risotto was far too claggy, being piled on the plate in a lump as opposed to the more fluid all'onda, or “wavy” texture that good risotto should display. Spanking fresh crab is one of my very favourite things, but sadly this dish was more redolent of the tired aromas of the harbour, than of the beast itself. 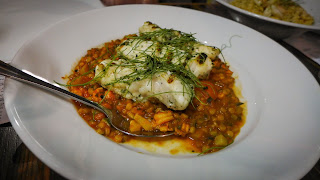 Chargrilled monkfish was also poor, having a dry woolly texture, and being perched on a puddle of vegetable fregola that had a really odd flavour I struggled to place. 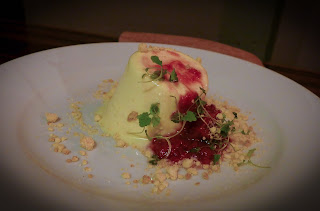 Puddings were rather nice. A white chocolate panna cotta was excellent, displaying the perfect wobble that only comes with judicious use of gelatine. 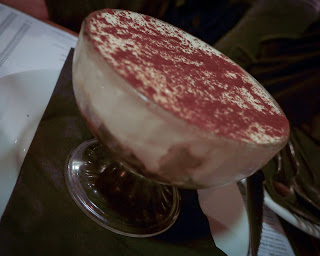 An individual tiramisu was also enjoyable, all the requisite parts being present and correct. 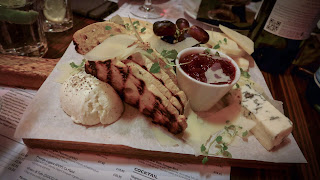 The cheeseboard featured some fine pecorino, but also some comically atrocious mozzarella. Meanwhile an affogato, served with a glass of Frangelico, neatly combined my caffeine, dessert and liqueur cravings. 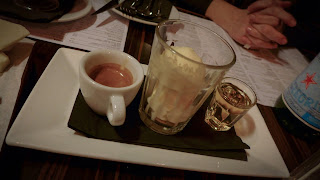 The restaurant is set over a number of levels, with wood floors, bare brick walls and leather banquettes.  It was, for a school night, impressively busy.  The tables around us were drinking Prosecco and seemed to be enjoying themselves.  The decibels rose with every glass.

It would have been nice, given the name of the place, to have been able to describe Marco Polo as one of the marvels of Newcastle’s dining world. Based on this visit I can’t. That’s partly due to the prices, which are all a few quid more per dish than you’d expect to pay at your old-school massive pepper-mill Italian, without the quality of cooking to justify the premium. Starters are mostly around £7-8, pastas approximately £11 and meat and fish dishes average about £18. The steak was £24.

Mind you, if what you really want from a meal out isn’t so much first-rate food as the opportunity to show off your brilliant new eyesight, I can’t think of anywhere better. Or bring a magnifying glass.