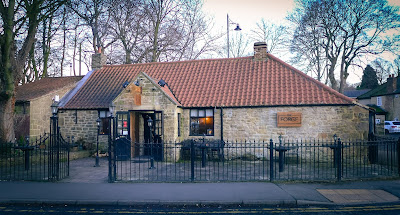 
Halfway through my main course of pearly hake with gloriously crisped nuggets of chicken wings I felt compelled to fire up Google Maps to see whether or not I could get away with finally sounding the “Sunderland has a great restaurant!” klaxon. Believe me, it’s primed and, as they say on Wearside, Ready To Go.

People in Washington may send their council tax to Sunderland, and they're certainly nearer the Wear than the Tyne, but many are proud of the fact that the town - especially the rather lovely, leafy old villagey centre I strolled through on the way to dinner - is a thing-in-itself.

Certainly one of my two companions for the night, very much a native, insisted on it. Mind you, football-wise, he’s of the black and white persuasion. Sorry Sunderland (on this most painful of relegation weekends).

It should be some solace to SAFC fans that The Forge is close enough for a consolation dinner; it's really doing some excellent things. Our own meal was full of good sense, fine ingredients, deft cookery and just enough creative flair to keep things interesting. 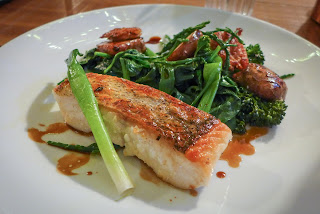 Take that fishy main course. It was cooked just so: skin crisped, meaty flesh still dewy. Those boned-out nuggets of chicken were masterly. At a guess I’d say they’d been confited to tenderness before being squished down onto the flat-top by something heavy, so that the skin side delivered wondrous crunch. There were green things - spring onions, samphire and stem broccoli - to provide allium tang, salt and some virtue, and a very good meaty jus, but also the smoky, earthy hit of Jerusalem artichoke. Lots going on, all very good and nothing superfluous. I eat out precisely because of plates like this. 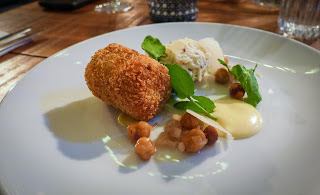 My starter had been a less sparkling, but nonetheless neatly presented chicken dish featuring a breaded and fried cylinder of meat with a micro-sliced remoulade, truffle emulsion and hazelnut vinaigrette. The chicken tasted a tiny bit like the canned version my posh Granny used to get from M&S - that's not a criticism, as I used to rather like it - the hazelnuts gave crunch and the truffle mayo a creamy, funky depth. 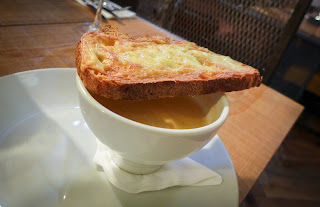 Elsewhere on the table things were going pretty well too. A bowl of white onion soup tasted like a whole cow’s worth of cream had gone into it and came with a slice of great “cheese on toast”, which happily turned out to be actual cheese on toast rather than some deconstructed aberration. I don’t know why their menu included the quote marks. 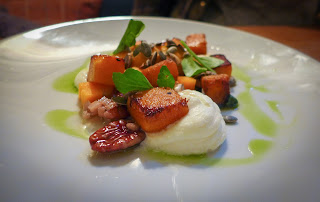 A salad of roasted squash and whipped goats cheese was exactly the kind of thing that everywhere does, but rarely this well. An electric green sage oil, toasted pecans, pumpkin seeds and deft seasoning kept up the interest. 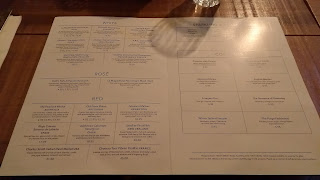 It was a bit of a shame that there wasn’t a similarly interesting list of wines to accompany all this fine culinary action. Only 8 bottles each of red and white featured, most were pretty uninspiring, with only two of each available by the glass.  No vintages were listed at all, which is almost unforgiveable. I tried Old Press, an Aussie Shiraz, but found it lifeless.

No such accusations could be levelled at my friend’s main course, a triptych of pig featuring just-rosy-pink fillet, a wodge of long-cooked shoulder and some very good black pudding, all dressed with jus, apple purée and accompanied by a blob of fine mash. 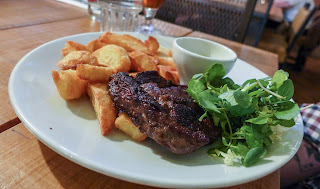 The Washingtonian was a nicely charred rib-eye steak cooked to medium rare and served with some righteous chips. Minor niggle: the bearnaise had a slightly weird tang to it, which rendered it persona non grata. 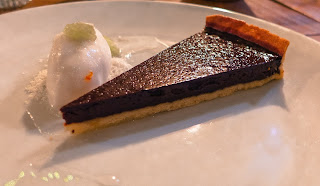 Two shared puds were winners. A tart of dark chocolate and coriander sported very fine pastry and a shiny filling that walked the tightrope between bitter and sweet, although I couldn’t detect the influence of the spice. 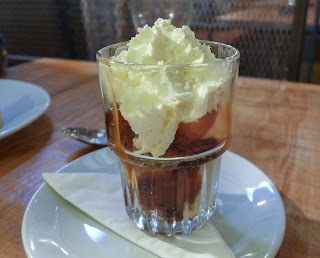 Date pudding sundae basically consisted of lumps of sticky toffee pud and salted caramel, punctuated by whipped and iced cream, in an old fashioned sundae glass. It was ridiculously sweet and all the better for that. 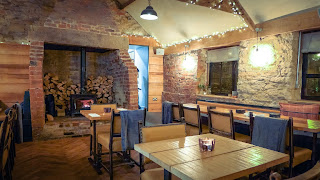 All of this in a handsome room of bare stone, brick, and wood, parquet flooring with a log burner at one end and a cute little bar at the other. It used to be the Old Smithy, and there has been a restaurant on this site for ages, but it's only been in its current incarnation and ownership since last year. Musically, there's a very cool line in mostly-indie tunes, with Marcel, by Liverpool duo Her’s, being the laid back pop-pick.

In short, this is a really lovely place to while away an evening with friends, which is probably just as well, as it took us just under two and a half hours to negotiate our three courses. This was recognised with an apology towards the end and an explanation that 'everything is cooked freshly to order, which can cause delays'. I rather doubt that the chocolate tart was thrown in the oven as our check was called on, but hey-ho.

Service, though friendly, was a little bit laissez-faire too.  Water jugs ran empty and plates spent longer than is optimal on the table, even after the last smear of sauce had been liberated.

Don't let none this grumble deter you from booking a table.  I first met Lee Bennett back in 2013, when he was Dave Coulson's very talented sous chef at Jesmond's fabulous Peace & Loaf. He is even better now.  You'll certainly have to book if you want to try his food - on a Wednesday evening, trade was brisk. It’s always heartening to see a good restaurant find an appreciative audience. 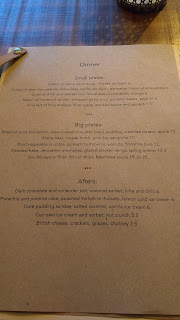 In Sunderland itself, the search for the great restaurant goes on, but Mackems can at least take heart from the presence of this cracker of a place, right on their doorstep.