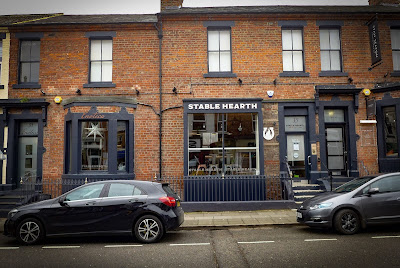 
Strange things, food trends. How do they happen?

Take Balsamic vinegar, for example, which has been around since at least the Middle Ages. However Britain was largely untroubled by it until the 1990s when all of a sudden it - or at least a product that imitates the real stuff - was dribbled over just about everything we cooked. Why? Was it Ready Steady Cook’s fault?

Same with Prosecco. Cava must rue the day Prosecco came along. The Spanish had the cheap fizzy wine market all sewn up, then along comes this upstart from Northern Italy and suddenly we’re all glugging that fruity stuff back so hard that famed Cava brand Freixenet shrugged its shoulders and decided to launch its own brand of Prosecco. What caused that? Was there a directive from somewhere that I don’t recall, or was it just the sneakily invisible hand of the market at play?

Another Italian product having a bit of a moment right now is Neapolitan pizza. The family tree of pizza runs wide and deep - there’s Roman, Detroit, New York and Chicago, Sicilian, coal oven, pizza bianca and so forth.  Yet the chances are that any new pizza joint opening up that's serious about what it’s doing will be advertising itself as 'Neapolitan-style'.

In this case I can hazard a couple of informed guesses. Depending on how serious you want to get, there are recognised standards about what constitutes Neapolitan style pizza. Standards are useful things. They provide a context against which to gauge both the canonically correct version of a thing as well the thought-provoking heresy. Secondly, there’s a lot of geekery involved in good Naples style pizza, and what is a chef anyway if not a geek with a knife? From dough hydration through to oven temperature, details matter. But maybe most important is that when done well, like they are at Stable Hearth in Darlington, this style of pizza just tastes really, really good. 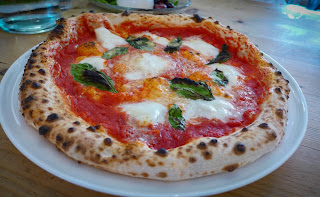 We ordered their Margherita - one of only two true Neapolitan pizzas, the other being the Marinara - and also a “Mafiosa”, a rather less traditional concoction. Both looked and smelled fabulous as they arrived, faint wafts of char coming from each of their leopard-spotted crusts. The Margherita was very good; a nice clean sauce made from San Marzano tomatoes topped with quality buffalo mozzarella and parmesan and a few basil leaves. To be very picky the dough was a teeny bit undercooked in places, and a little more tomato sauce would have given the characteristic “soupy” centre that makes for a real Margherita. I actually preferred the Mafiosa, which had a lot going on but was all in perfect balance. Bitter radicchio leaves, sweet roasted peppers, salty gorgonzola, creamy mozzarella, a touch of acidity from balsamic and umami-packed sausage and pepperoni; no tastebud was left unturned. There was so much going on, and all of it so good that any micro-niggles about the cooking of the dough - a slow-rise yeasted affair of no little character - were easier to ignore than on the Margherita.

These fine pizzas were produced by owner Nicholas Thexton in an Acunto wood-fired oven imported from Naples, but Stable Hearth is no one-trick prancing pony. We had preceded our pizzas, as is often the done thing in the old country, with fried stuff. 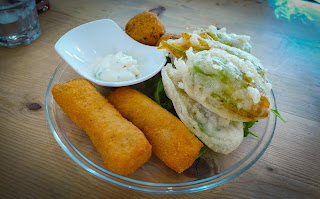 Arancini were unusually good, for once tasting of more than just a good way to use up yesterday’s risotto. Steamy and oozy inside, they had tremendous flavour from pumpkin, sage and provolone cheese. Lovely potato croquettes had a bit of bonfire about them courtesy of some smoked scamorza cheese, and fried courgette flowers were great although would have been greater still if stuffed with something. I poke a blob of ricotta and a single anchovy into mine. You must come round sometime. 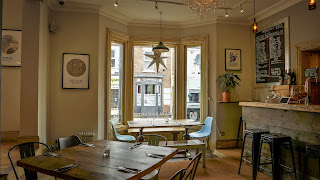 Modern pizza joints can tend towards the functional, but Stable Hearth has been refurbed with care and attention to detail. Soft tones of paint, bare wood tables, loads of natural light and smart prints depicting various Italian cities, all set to a soundtrack featuring The Bees and Jean Marc-Challe.

Staff - one of whom we recognised from a previous meal at the sadly defunct Truffle restaurant - were so full of warmth and genuine friendliness that I felt like a terrible human for not being able to tip via the card machine.

But I’ll be back, with cash, to salve my conscience. Not least because the cakes we had boxed up to take home were a bit on the special side. 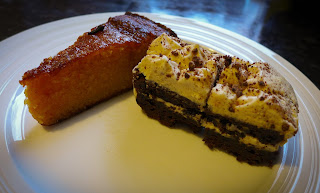 A blood orange and polenta creation was rather pleasant, but their coffee cake was a total riot of squidgy bittersweet joy, like a double-layered sandwich of superlative brownie and icing. They have a fine list of Italian wines that deserves more attention than I was able to give, although a glass of Montepulciano Caldera was nice enough. 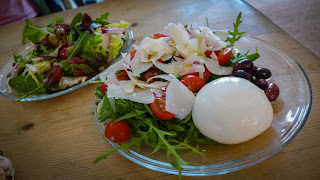 I should also mention their salads, which were thoughtfully put together and dressed. Especially enjoyable was the Campania, featuring a whole blob of the richest, creamiest buffalo mozzarella you can imagine.

Darlington has one of this country’s truly great restaurants on its outskirts (The Raby Hunt), but a chap can’t eat tasting menus every day. Some days are for pizza.

I had meant to visit Stable Hearth while it was garnering appreciative whispers at its previous incarnation in Gainford (thanks to regular reader Ruth Williams for the suggestion), but it never happened and they made the move into Darlington towards the end of last year. Like any restaurant refurb, I’m sure it was a trying time and a labour of love, but the effort was worth it. This is a little beauty of a place, run by people who really seem to care and know about what they’re doing, and who deserve our custom. Highly recommended.