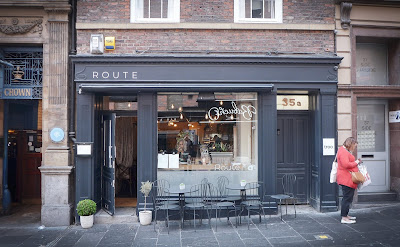 35 Side
Newcastle upon Tyne
NE1 3JE


I eat my way through a lot of mediocre to middling food in order to bring you these dispatches. And for what? Completeness, I suppose. There’s a bit of text at the top of my home page declaring this site to be “The definitive guide to restaurants, gastropubs and cafés” across the North East. 294 down so far. It’s a heavy cross to bear.

As a result, I hope for the best, but all too often find myself set against “tempura” squid, some lazily reheated ribs or yet another so-called sticky toffee pudding that is in fact micro-pinged sponge with bought-in sauce and dud of ice-cream.

So, you’ll forgive me if I get a bit excitable when I catch wind of what promises to be somewhere genuinely good; when I see a list of slightly off-piste wines that I really want to try and a fun set of dishes to go along with them. If what follows comes over a little bit fanboy, then sorry, but Route, the new place on Newcastle’s Quayside by The Staith House’s John Calton, is exactly my kind of place. I really liked it, and that’s just how it is.


It isn’t perfect, or wasn’t yet after being open for just a couple of weeks - we’ll get to a few minor gripes in due course - but it’s pretty, pretty good. The menu reads like a dream: a terse list of ingredients, all of which sound like they belong together, peppered with just the occasional adjective. We ordered with lusty abandon. 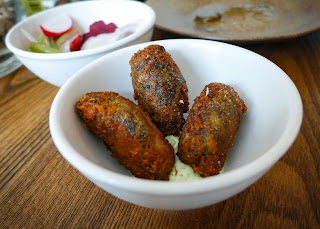 Early-meal highlights: fritters of rabbit and black pudding were joy; crisp and steamy in all the right places, the moist blood pudding restrained enough to allow the rabbit flavour to come through. Their lovage mayo made for some great swooshing. 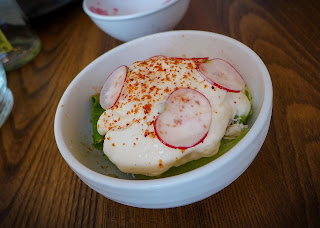 A pile of ozoney white crab was topped with a nitrous-whipped hollandaise that had intense flavour but melted away to nothing on the palate, so not overwhelming the delicate crab. This was technique and technology not for its own sake, but in service of a fine ingredient, as it should always be. 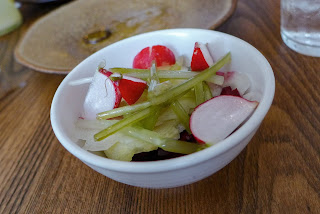 Elsewhere, dishes veered wildly between the dainty and the butch, to fine effect. Market pickles - mostly beetroot and wild garlic stems - had been given just a kiss of vinegar, rather than a full snog. 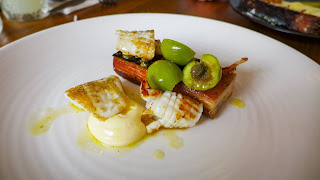 Curls of marinated squid and verdant green olives lifted and lent seasoning to a neat cuboid of crispy pig. 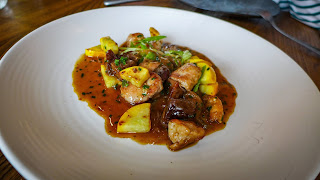 On the other hand, a dish of lambs tongues, creamy sweetbreads and pert yellow courgettes swimming in the kind of stickily reduced sauce that is half the reason for eating out was a red-blooded slap round the chops, with flavour dialled up dangerously close to 11. 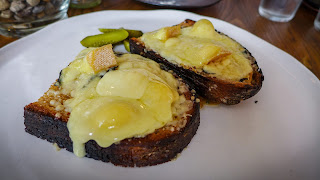 In a similar vein, great doorsteps of first-rate sourdough were smothered in a lava of melted Ogleshield cheese, with just enough mustard and onions lurking in the background to stop it all getting too much. 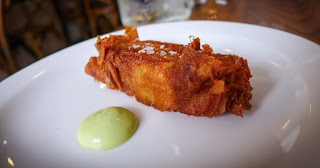 And then there was a dish called “crispy potato cake, beef fat”, which is poetry as far as I’m concerned. Just order it, you can thank me some other time. 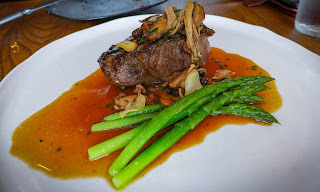 And so, in the name of balance and honesty, to the niggles, even if they were fairly minor. A lump of beef rump may have been aged for 40 days, but it didn’t quite have the inherent flavour that would have justified its slight chewiness. The accompanying St George’s mushrooms were in fact the star of this dish. Neither of the two puddings were quite at the level of some of the preceding savoury delights. The pastry on a dark chocolate tart had caught, which made the whole thing slightly bitter; a shame as the mousse it was smothered in was decadently good. 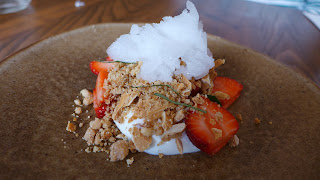 I struggled to discern what impact baking the yoghurt had had on a dish in which an elderflower granita and strands of mint were in any case the dominant flavours. 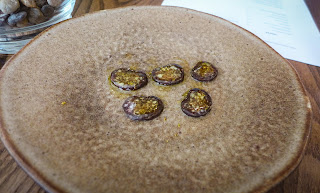 And four quid for five pieces of salami the size of my thumbnail, even if they were delicious, felt a bit tight. 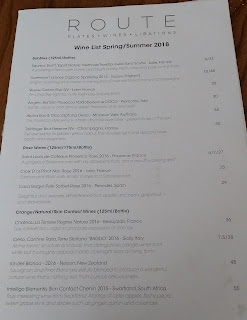 But such grumblings are easily brushed aside, not least when there is such fun to be had drinking wine by the glass. I got through rasping, orchardy orange wine from Sicily (yes, they’ve invented another colour of wine; hadn’t you heard?), a full bodied oaked white Rioja and fine Argentinian old-vines Carignan. All demanded, and rewarded, attention. I rose from lunch refreshed and renewed. 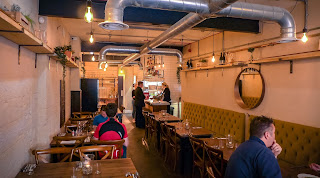 They’ve done a good job of turning what was Burgerstop into a neat little restaurant, green cloth banquettes down one side and four-tops down the other. The decor is simple but tasteful, all untreated wood whitewash and air duct. I wasn’t too sure about the dadrock that pervaded on the stereo; I personally find The Eagles to have a dyspeptic effect, but you can’t have it all.

Service was friendly, if not completely clued in to the menu; there was a fair bit of “I’ll have to ask the chef”, but it’s early days for all that. I’ll be really interested to see how Route’s menu changes and develops over time. I sincerely hope people aren’t put off by the lack of a rigid starters/mains structure and I do wonder if some will find the price point to be just a teensy bit enthusiastic. But nothing should detract from the headline news here, which is that this was one of the downright tastiest, most fun-to-eat meals I have had in some time.

I probably haven’t felt so enthusiastic about a new opening in Newcastle since The Patricia. Restaurants like these, which know where to get good ingredients and then how best to prepare them, are oases in our culinary landscape. I strongly advise you to make use of them wherever you can.