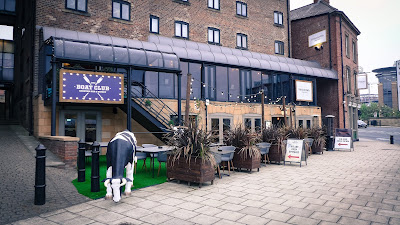 
I rarely order steak when eating out, for a couple of reasons. For one thing, it scarcely allows a kitchen to demonstrate its talent; seasoning and heat applied to a lump of protein doesn't really justify all that time spent at catering college. Keep your sirloin and instead show me the daube of feather blade.

Secondly, steak usually arrives with crashingly dull accoutrements. Chips, a grilled mushroom and a barely warmed-through tomato, you say? Innovators just keep innovating! Sauce Diane is it? Well then, let’s dust off the flux capacitor out and set it to 1972.

No, for the most part steak is something to cook at home. Buy expensive meat, make an insanely buttery mash, open a good red, fire up the charcoal: enjoy.

I do make an exception though, when steak is the whole reason for a restaurant’s being. In such cases, one hopes the folks in charge have taken the care to find some dry-aged cow of distinguished lineage and prepare it in a manner that does justice both to the beast and to those who reared it.

Over the years, I’ve found some really disappointing steak specialists in our region: like The Rib Room at Ramside Hall (which took three goes to get me one medium rare), or the chain restaurant Miller & Carter, where just about everything was poor.

Nowadays for good steak in Newcastle I rely on Terry Laybourne’s Porterhouse in Fenwick, with its Glenarm beef and heat-belching Josper grill. But now there's a new option, also named after a nice piece of beef on the bone: Tomahawk.


This is the third branch of a small chain that began life in North Yorkshire. It opened without fanfare in one of those restaurant sites that can fairly be described as “difficult” (where The Jolly Fisherman had failed, and The Waterline pub before that).

Currently the exterior is more surreal than welcoming: a bunch of empty tables on an astroturfed area from where a giant fake cow, head bowed, appears to be wandering off towards the Tyne Bridge.  Meanwhile tinted glass prevents you from actually seeing into the restaurant.

Inside, things were more assured. Tables are generously sized and spaced and the welcome was warm. The interior hasn’t changed drastically since it was the Jolly Fisherman apart from the odd cowhorn here and there. 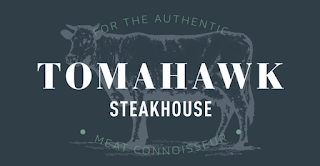 The website says it’s “For The Authentic Meat Connoisseur”, so let’s cut straight to the chase and talk about the first bite of steak. Was it good? Oh my days, yes. Was it perfect? No, certainly not. Why am I asking myself questions as a rhetorical device? Never you mind. 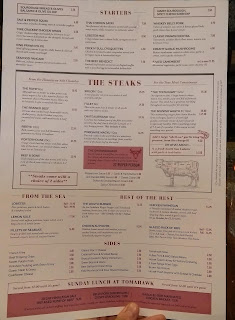 Tomahawk offers a number of familiar cuts, as well as a couple of spendy premium Wagyu options. I went for 10oz of Yorkshire Wagyu which, upon enquiry, turned out to be a sirloin. The menu didn’t say, which seemed bizarre when you’re charging £34.95. 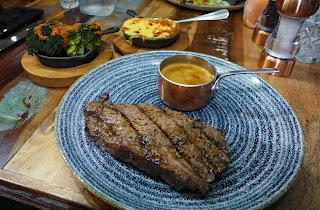 Regardless, this was a potently beefy piece of meat with a denseness of flavour that was truly impressive. It was juicy enough not to need any lubrication, which was as well because their Classic Diane sauce was dull and a bit sickly.

And yet it could have been so much nicer. I’m not sure how they’re cooking their steaks - grilling, at a guess - but there was scarcely any char, save for a few pointless lines. Get this thing over some white-hot coals, or even just in a cast iron skillet of foaming butter and it would have been so much beefier and better.

A side of broccoli was supposed to be covered in chimichurri, but instead of the famed tingly Argentinian green sauce of parsley, chilli and vinegar, their red version tasted of nothing but raw throat-catching heat.

Better was a thing called ‘hash browns’ (their punctuation) with brisket and cheddar, which turned out to be a mini-skillet of total evil; lumps of spud and meat were floating under a molten eruption of cheese. 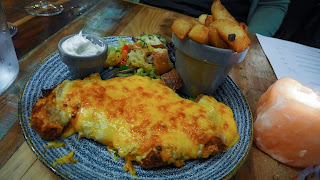 Not fancying steak, Mrs Diner had gone for the Chicken Parmesan. She was rewarded with a vast, flattened, breaded, fried, bechameled and cheesed chicken breast. I’ve never understood the attraction of this dish as a post booze-frenzy feast and I still don’t, but this version was a perfectly good example of the art. Crisp crumb and a moist, reasonably tasty bird, with good beef dripping chips to boot. She managed about half of it, and frankly I was proud. 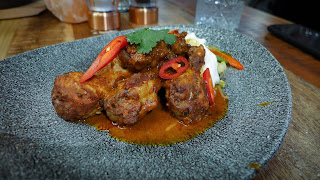 Starters had been mixed but mostly poor. ‘Fire cracker’ chicken wings were supposed to be “crispy”, but were nothing of the sort. They were in fact one of the softest items of meat I’ve ever consumed, even the cartilage being rendered edible by what I can only assume was a super-prolonged session in the slow cooker or sous vide bag. 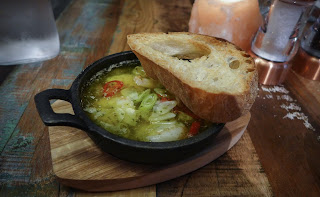 Pil pil prawns were better, featuring whopping, delicately cooked shellfish, even if the broth they were swimming in tasted a bit flat and greasy. More garlic and paprika, and less oil please. 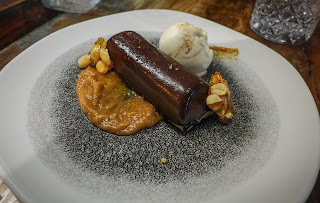 We shared a peanut butter chocolate bar for pud, so essentially a riff on a Snickers. I don’t know where it was made, but it certainly tasted and looked like it had been produced off-site, being an assembly of nondescript components with no sense of freshness to any of them. It wasn’t terrible, but in truth I’d have probably preferred to spend the calories on a real Snickers Ice Cream bar from our freezer at home. I love them even more than Junior Diner.

Service was excellent. We were looked after by aimiable staff, one of whom was working his first night. You’d never have known. Thumbs up for whoever’s doing the recruitment and training. 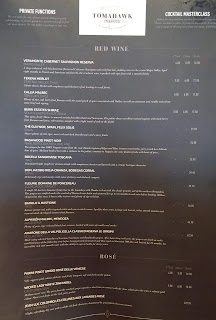 Drinks were also good, including a well made Martini using The Lakes Gin and a nice glass of Vidal Kiwi Sauvignon which did its best to cut through that Parmo, although ultimately, like Mrs Diner, it had to admit defeat. No vintages on the wine list though. Grr.

We left Tomahawk a bit puzzled. They are definitely sourcing some really good beef so if you want to drop hefty dollar on a nice steak, then fine. It just feels a shame that they don’t appear to have capitalised on this by cooking those steaks to really show them off, or get the consistency right across the rest of the menu. Tomahawk felt and tasted more like a brand than a restaurant.

There was a fair crowd of twentysomethings in on the weeknight of our meal, so maybe it’ll be third time lucky for this site. I’ll be taking my beef-pounds to Porterhouse though, where they really know what they’re doing.