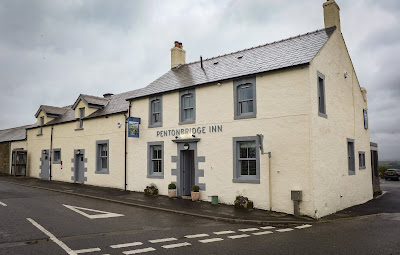 Sometimes the restaurant trade moves so fast that I struggle to keep pace. If you wanted an example of the ephemeral impermanence of existence, you could do at lot worse than to keep tabs, as I try vainly try, on which chefs are cooking where.

Case in point: Pentonbridge Inn, just outside of Longtown in Cumbria. It was only late last year when, to a fair harrumph of fanfare in the trade press, husband and wife chefs Jake and Cassie White, ex of Marcus Wareing and Hélène Darroze, left the bright lights of London for the rather less likely venue of Penton, just a few hundred yards south of the Scottish Border. There was some excited chat on the part of the owners about the possibility of Michelin stars, of improving local food supply chains and even of Longtown becoming a notable “food town”.

This last statement drew a sustained eyebrow-raise from me. I’ve driven through Longtown many times. Let's be charitable: Cartmel it ain’t. Still, the food at Pentonbridge sounded like serious fun. Great, I thought. I’ll pop in for lunch sometime. So we did, a couple of weeks ago on a trip back from The Lakes, but neither Jake nor Cassie were anywhere to be seen. For whatever reason they’ve departed the business inside of a year (they left in May ‘for personal reasons’), to be replaced by Gary McDermott who had previously slung his knives at Carlisle’s Rickerby Retreat and most recently as head chef at Grasmere’s Lancrigg Hall.

I heard the White’s food here had been superb, but now I’ll never know. What I can however tell you is that, happily, Gary’s isn’t half bad either. 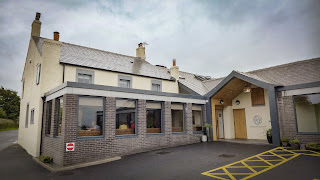 We sat in the restaurant, rather than the adjoining bar, and had it to ourselves for the majority of the Sunday afternoon of our meal. 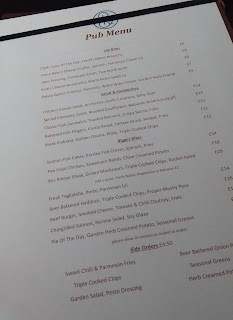 We could have ordered from a menu of zhuzzed-up pub favourites, or gone for the Sunday lunch, but instead tried a set menu of three courses for thirty pounds which you could tell in advance was going to be a cheffy affair by the lack of any words other than the names of ingredients. 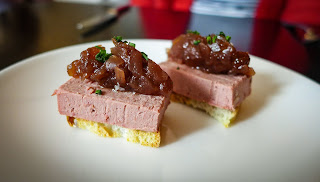 An opening salvo was unleashed by way of some unbidden but thoroughly welcome little snacks of rich, well-seasoned chicken liver parfait on crisp toasts with damson chutney. 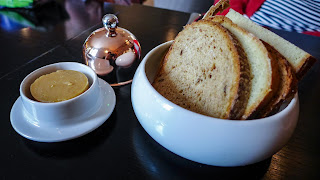 Brown and white bread was also good, and came with a dinkily cloched saucer of butter, featuring the homely tang of Marmite.

While on the subject of crockery, it’s clear that a fair bit of moolah was lobbed at the re-opening of this place last year, even down to the fine details; staff were all smartly and matchingly attired, wine glasses were the nice ones by Riedel, and so on. 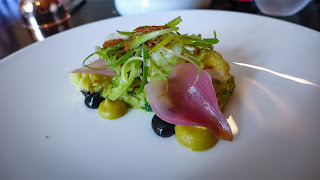 The best thing we ate was also the first: “Monkfish, curry, lime, dashi, matcha” turned out to be a punchy, pretty and hugely satisfying dish demonstrating a wide bandwidth of techniques. The fish, cooked in matcha, was fresh and still just opaque at the centre, thus avoiding the cotton wool texture that can beset monkfish in lesser hands. Cauliflower had been roasted, made into a rice and weensy, pubescent slivers of it pickled, along with some petals of onion. Seasoning came from neat dods of two tremendous sauces, one of punchily retro curry and the other of decidedly non-retro dashi and squid ink, and a scatter of what I think was togarashi spice. This strong cast of characters came together to play a hell of a ensemble. 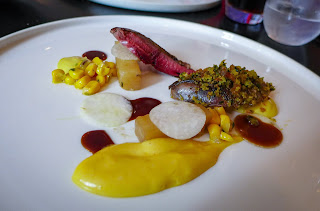 Pigeon featured on a main course which was nice, but didn’t quite come together. The breast of the bird itself was full of flavour and cooked to rare tenderness, but still had some tough connective tissues that made its eating not entirely user-friendly The best part of this dish was a cuboid of delicious turnip, presumably poached in butter, while a purée of corn was clearly made with a fine stock, being lusciously rich. A sauce, some pickled turnip, fresh sweet corn kernels, a crumble: there was a lot on the plate, which perhaps explains why a few elements were barely lukewarm by the time it reached us. 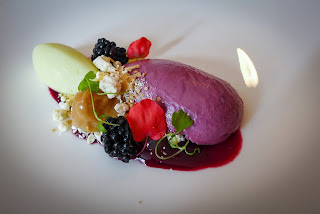 Pudding was another prepossessing looker of a dish. The tarragon in a blackberry panna cotta was present but not overwhelming, a green apple sorbet was tangily delicious and a tiny little toffee apple added some full-on sweetness. The panna cotta tasted a bit worthy, almost as if it had been made with yoghurt rather than cream, but was a light way to finish the meal. 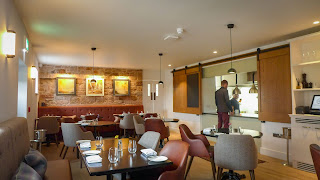 I liked that what was an old coaching inn has been transformed into a light and modern space, punctuated by blasts of colourful art and north African carpets, even if it still feels a bit brand new. There are plush bedrooms if you fancy staying over, although I’m not quite sure who the target market would be as this place is pretty remote. Walkers, maybe, although they’ll need to take their muddy boots off before entering the spotlessly clean premises. 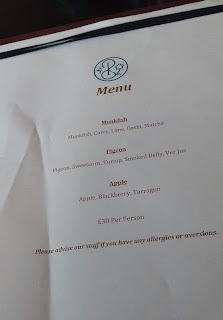 We were superbly looked after by a very jolly team, save for a bit of a kerfuffle when Mrs Diner attempted to substitute a single ingredient (the pigeon) from her lunch, which threatened the possibility that neither of might have been allowed the set lunch. When this request reached the kitchen it was no problem; it just took a bit of negotiation to get it to the kitchen, which seemed needless. 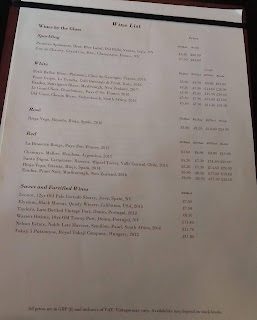 From a good wine list (five each of red and white by the glass, vintages listed) I enjoyed a lovely Marlborough Pinot Noir and a fine Palo Cortado sherry with pud. 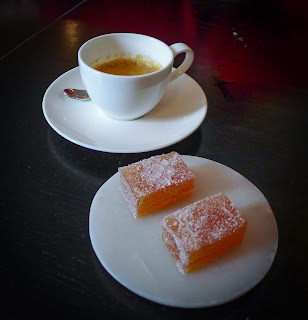 Lunch, with libations, came to a sniff under £100, which was fair. Who knows, by the time you read this they may have changed the chefs again (I see that just this week Pentonbridge Inn was “looking for chefs to come and join the kitchen team, great rates of pay, stunning kitchen”). They’re also seeking a new restaurant manager (“great salary, relocation fee, fantastic opportunity”). I really hope Gary and the restaurant succeed, because we really enjoyed lunch and I’d like to go back.

The serious chefs from London may have packed up early, but there is still some serious, ambitious cooking going on here that I’m happy to recommend. This may be one to watch.