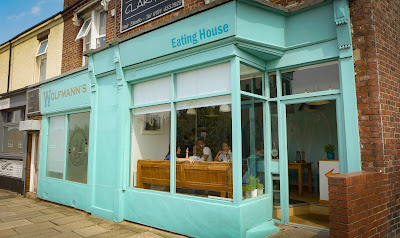 
The phrase “hidden gem”, is a double-edged sword. One of the joys of being The Secret Diner is to be able tip you the wink about unassuming but excellent places off the beaten track; however, doing so brings more than a frisson of guilt for those who thought they had these secret haunts all to themselves.

So, if you have a favourite seat at Wolfmann’s Eating House in South Shields - and there are only about eighteen to choose from - then I’m sorry for what follows (you can blame Phil Dixon, who originally emailed me about it). This really is a cracking little place, with charm to burn and a well-cooked menu of unusually fun Asiana that deserves to find a wider audience. 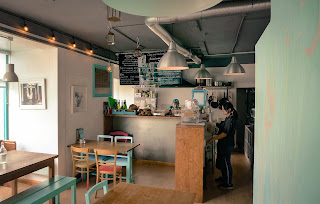 We visited at lunchtime, when the short menu includes paninis as well as more interesting main dishes with an eclectically oriental feel. In the evening the menu stays short but more complex sounding dishes come out to play, such as a venison dopiaza, or wood pigeon salad with lime and cumin. Those will have to wait for another time. 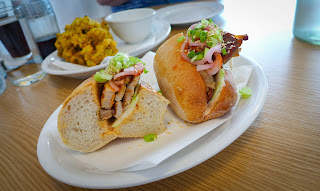 I love a banh-mi, that wonderful hybrid of Vietnamese and French culinary traditions which proves that not everything about imperialism was terrible. The one we tried here was of the roast pork variety, pepped up with chilli jam, pickled shallots and scallions. The bread to filling ratio was a bit over-weighted towards the former, and I personally think a smear of pâté on the inside of the baguette, which their version lacked, is what makes this sandwich so special, but the pork was delicious nonetheless, with plenty of crowd-pleasing crusty caramelised bits. 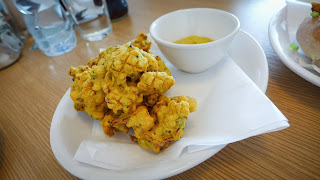 The curry mayonnaise that accompanied a side of cauliflower fritters was addictive stuff in a comforting, old-school sort of way. The fritters themselves were beautifully spiced with turmeric and (I reckon) nigella seeds, the cauliflower cooked to a perfect al dente, although the batter which encased the nuggets would have benefitted from being rather more crisp. 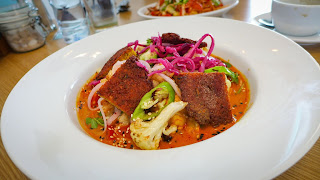 Dish of the day was a Goan fish and mussel curry which, though rich with coconut milk, was made refreshingly and moreishly tangy by the plentiful addition of both lime and tamarind. I love tamarind, with its treacly-tart ability to give both depth and zest to a dish. As well as white fish and mussels, florets of roasted cauliflower, strands of pickled cabbage and some roast carrots bobbed around in a tomato-based sauce. It was a riot of colour and fun, topped with flattened lentil cakes that provided welcome ballast, although they could have been crisper. 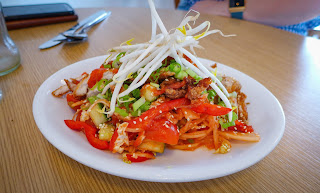 A salad of ginger chicken was lovely to begin with, but became a little one-note as the mouthfuls passed by; the chicken needed much more ginger, and to be rather more crisp (there’s a pattern developing here), while the soy dressing could have done with some fish sauce-derived funk and complexity. Mind you, a lady at the window table was rhapsodising about hers, so maybe this was more a matter of taste than execution.

Even this rather less impressive dish would still see me return to Wolfmann’s and I might just have to become a regular if I were from round these parts. Other than Colman’s, I’ve struggled to find anywhere to get enthusiastic about in South Shields since John Calton left Harbour Lights to go north of the river many years ago.

I asked Wolfmann’s chef-owner (whose name is also John) why he was cooking this particular style of food, expecting perhaps to hear about some Damascene moment while backpacking round Thailand. No: he just likes it, so why not cook it?

Why not indeed, especially when it’s served up by such lovely friendly staff in a cute duck-egg blue room while The National, Toots & The Maytals and Curtis Knight played on the stereo. This chef has excellent taste in music as well as food, the result being a café-restaurant that was a pleasure to spend time in, especially on one of the few dreary days that this summer has served up. The welcome, music and food were all cheery rejoinders to the gloom outside.

Prices, especially at lunchtime, were equally cheering. Six pounds for the chicken salad and less than nine for the Goan curry was excellent value for dishes that fed us handsomely. We stuck to nicely made coffees and water, although in the evening you can bring your own booze. 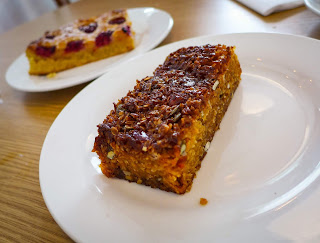 Our puddings consisted of a couple of slices from the counter, one a sort of flapjack, the other a frangipane slice. Both were jolly nice, especially the latter.

In awarding Wolfmann’s just three stars for food, it might sound like I’m damning with faint praise, but that is very much not the case. Three stars is “Recommended” – see my ‘Ratings’ guide, above, and brings it comfortably into the lower echelons of my ‘Best in the North East’ list, also above. There were things that could have been tweaked or improved about most of the dishes, but that in no way detracted from what was a hugely enjoyable lunch.

You are unlikely to come to Wolfmann’s in search of technically flawless cooking. If you do, you may be disappointed. If, like us, you come in the hope of tasty food prepared by really nice people, you’ll do just fine, as we did.

So I’m sorry if the genie is now out of the bottle and your favourite secret bolthole has been revealed to all and sundry. If it’s any consolation, I’ll have shot myself in the foot too if there’s no space for me when I head back to see what fine things happen when the lights are lowered for the dinner service.