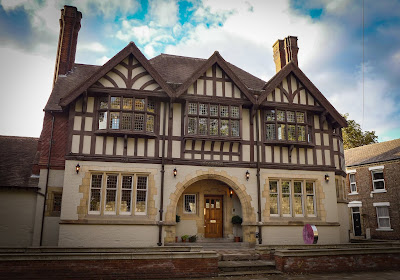 I always thought this was the sort of pathetic line that men - well, mostly men - trot out when they want to break up with someone, but don’t have testicular fortitude to tell the dumpee the truth. Far, far better to refer to some ambiguous failing of the self than shoulder the responsibility for someone else’s distress. That's always been my excuse anyhow.

But once or twice of late, when faced with a particular type of modern British cookery, I’ve wondered whether my slightly muted response might not be the food’s fault, but my own. Is there something I’m just not getting? Why, when I’m going in fully primed to have my socks blown off am I coming out with them still firmly inside my shoes?

The type of food and restaurant I’m talking about here is one which takes its time and place seriously, which thinks carefully about ingredients and preparations, often to the point of growing, making, or preserving them itself. In Northern England that means acknowledging the shortness of the growing season with creative thrift, perhaps alongside a focus on high quality dairy and meats, and certainly an interest in preserving and fermenting. Lake Road Kitchen in Windermere does this sort of thing. I couldn’t wait to eat there, expecting a minor epiphany, but found it... just nice. And so then to Roots in York, the second restaurant from Tommy Banks, which was, well... just very nice.


Maybe it’s a matter of expectations. I do generally try to maintain an open mind prior to any meal, but sometimes the hype-train is unavoidably stoked. Tommy Banks has been on a absolute roll of late, lurching from one triumph to the next. Two Great British Menu victories, a beautiful cookbook, maintaining the Michelin star at the Black Swan in Oldstead (a few years ago, before the hype, a meal I had there was a revelation – The Black Swan remains one of my few 6 star restaurants) and, somewhat comically, though probably good for PR, last year The Black Swan was named the best restaurant in the world by TripAdvisor. People sometimes even mention his good looks, not that I’d ever stoop to that sort of thing. In any case: things seem to be going rather well. 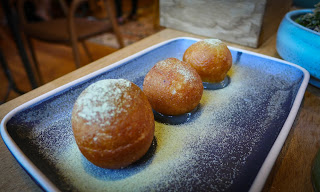 So, when smoked eel doughnuts dusted in Douglas Fir powder were a bit on the stodgy, barely tepid side I couldn’t help but notice. 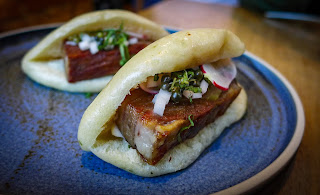 When lamb and fermented turnip bao were merely pleasant, but needed the additional thrust of something saline, bitter or acidic, it was a bit of a disappointment. 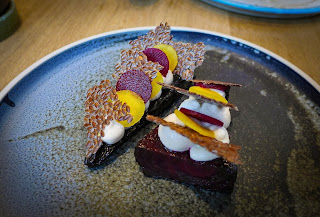 And when the signature dish, imported from the Oldstead mothership, of crapaudine beetroot cooked slowly in beef fat wasn’t the greatest flipping beetroot I’d ever tasted, it was, I’m afraid to say, rather a let-down.

That last dish in particular, with its pointillist linseed cracker and discs of pickled golden baby beetroot, looked gorgeous but, to this palate, just didn’t deliver on flavour. The cake-like slices of burgundy root had an interesting, almost fudgy texture, but the mark of the best cooking is that is that it makes things taste more of themselves than you thought they ever could. Maybe it could have done with a bit more seasoning. 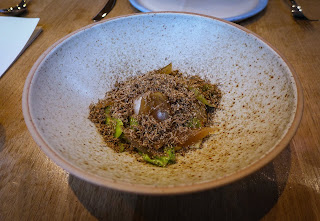 Make no mistake, there was joy and triumph too. A gloriously rich dish of slow cooked duck egg and truffle (Australian - not everything can be grown, made or preserved round here) was punctuated by petals of startlingly delicious fermented onion which were sweet, savoury, sharp and and a little bit funky all at once. 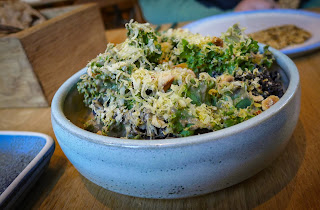 A bowl of raw kale tossed in sheep’s yoghurt and pickled walnuts, topped with toasted hazelnuts and rich cured egg yolk was as tasty as something so refreshing and obviously good for you has any right to be. 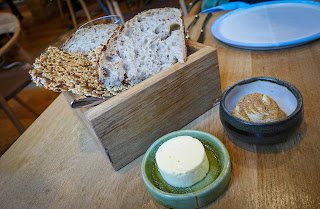 The bread course was a bit special, too. Their own sourdough, served just warm, had a tremendous crust, and their cultured butter was bracing yet luxurious. Seed crackers - held together seemingly by magic, but in actual fact by potato starch - and Lincolnshire Poacher custard, on the other hand were both borderline genius, the latter almost laugh-out-loud tasty. 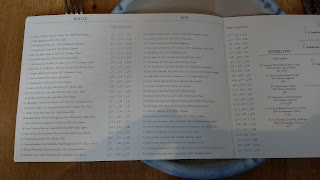 There were other things I liked a lot. The wine list was an exemplar of unfussy approachability. Twenty five each of red and white, all available by the glass thanks to a fancy Coravin thingy. We had a great time getting eclectically sloshed on a brambly Greek Agiorgitiko, an intriguingly restrained Trousseau from the Jura, and - a first for me - a clean but really very nicely perfumed white from East Yorkshire. Thanks, climate change. 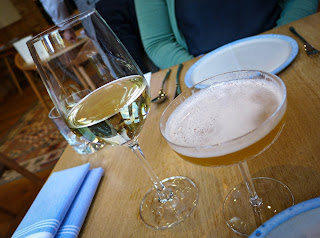 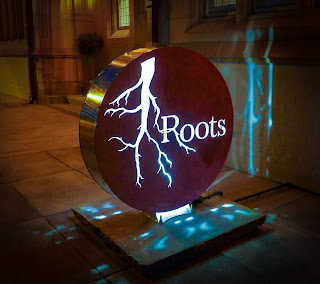 Service, two weeks after opening, was knowledgeable, keen and super-engaged as it might be given that front of house staff have apparently all spent time foraging around Oldstead. Their branding is also spot-on, from the nifty sign out the front to the fact that the legs of a number of the tables were in fact a metallic tangle of, well, roots. 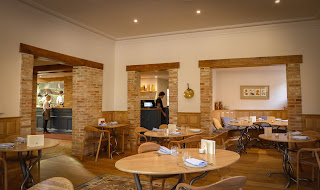 I liked the wholesome rustic charm of the interior, the blonde wood tables, rugs and muted paint tones giving the place the feel of an upmarket version of Hobbiton. I liked the 90s MOR indie of Morcheeba et al a little less. 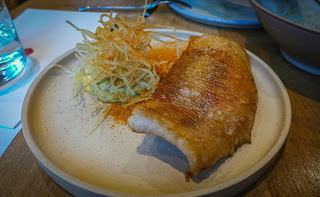 Back to the food, and a couple of savoury dishes that, being merely nice, summed things up well. Thornback Ray wing was a riff on fish and chips. The skate had good flavour, but the brown butter in which it had been cooked could have done with being a shade or two browner, and the fermented potato chips didn’t do much for me. 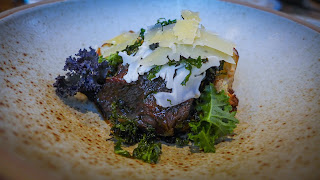 Ox cheek is one of my very favourite things, but Roots’ version just didn’t quite pack the soft and glossy unctuousness that makes this cut so wonderful. 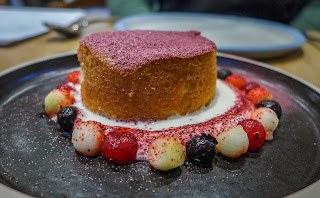 Puddings were all very good. An apple cake had floaty-light sponge and a clever berry sherbert topping. 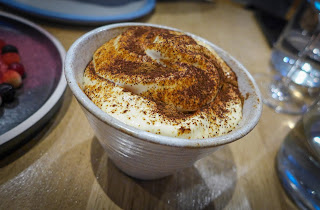 I was properly dubious about a carrot and chicory tiramisu, but it was an impressive feat of floaty whipped something-or-other with nubbins of chewy caramelised carrot in its depths. 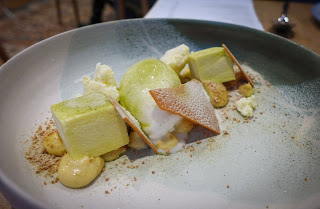 “White chocolate, Douglas Fir (again!) and lemon verbena 2018” was an assembly job in the modern style, but it was at least assembled from delicious components, in particular what I think was a roast white chocolate tuile. A farmyardy pear ice-wine and a sparkling Verdejo helped chase down the last few spoonfuls. 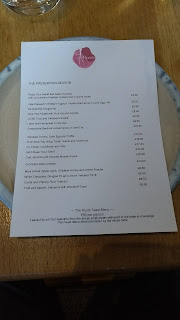 All this came to £166, without service, but inclusive of the fifty quid it cost us to book the table. Blame those pesky no-shows for that one.

As you’ll have gathered, this was by no means a bad meal. It was, if a bit patchy, a very good one. Certainly it’s very early days for Roots, and, in case you’re wondering: no, Mr Banks wasn’t in the kitchen on the night of our visit. That may well have made a difference.

The few dishes that lacked seasoning, acidity, or just a bit of kapow, had me wondering whether, when you’ve put so much effort into growing a vegetable, or sourcing a bit of meat, it’s possible to imagine that the provenance of the thing ensures its deliciousness. I’m not so sure. I sometimes think that chefs who venerate - or even fetishize - the ingredient over the transformative powers of their craft do themselves a disservice. I think I’d rather have a merely good ingredient cooked superlatively than the other way round.