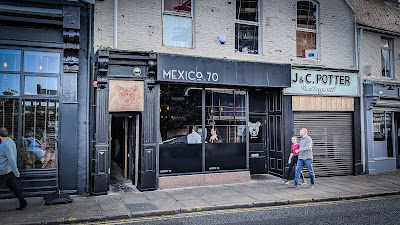 
It’s fair to say that my dispatches from the front line of the Sunderland restaurant scene haven’t always been popular with the locals.

“Get out and stay out” has been the general tenor of the comments hurled at my efforts. I was once called an “aching ballbag of a man”, after what I think was actually a moderately positive review of I forget where. Last time out I was accused on Facebook of trying to destroy the city, which even I would suggest is overstating the influence of my reviews just a tad.

When, on an upcoming trip to Wearside, I asked Twitter where I should try, one friendly local instructed me to “Don’t bother if you are only going to slag off the city like last time!!!”

This whole thing is, of course, a complete misunderstanding. I bear no ill will towards the Mackems’ fair city. Quite the opposite. Some of my best friends support Sunderland. Well, one or two. It is entirely in this spirit of comradeship that I have occasionally wondered in print how it can be possible for nearly 300,000 people to be so poorly served by the hospitality industry. Don’t shoot the messenger and all that.

So, it is from precisely that same sense of solidarity that I take so much pleasure in declaring that I’ve finally found somewhere in Sunderland's city centre that I am delighted to wholeheartedly recommend. And thanks to so many on Twitter who suggested it.


Mexico 70 is doing so much right, and making it look so normal, that eating there served as a refreshing rejoinder to all the poorly thought-out and executed restaurants that still stalk the land. You get inside via a side door which leads down a dark corridor; you’re not sure if you’ve made a wrong turn. Whether deliberate or not, it’s the same kind of tension-and-release sleight of hand employed by the likes of Meatliquor to good effect.

Once you find a table you will be advised that tacos are their thing and to order at the bar. 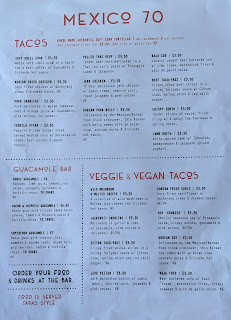 “Think of it like tapas” we were told, which I imagine will be useful information for anyone who has never seen a taco before. We nodded and smiled politely. I asked whether they make their own tortillas.

“Yes, from masa harina, every morning,” came the reply, at which point I got my hopes up. We ordered all the tacos we liked the sound of, a few extra bits and bobs and settled in. 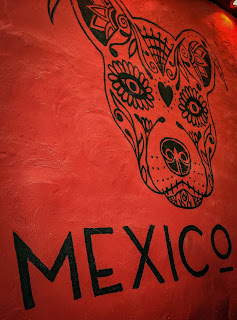 The place - all bare wood, brick and splashes of neon - was packed, but the food started coming within minutes and arrived at a rate of roughly one or two plates every five minutes; on this evidence they’ve got the service absolutely nailed, the kitchen well organised and prepared. 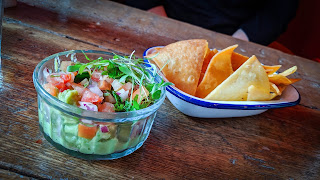 House guacamole was as nice as guacamole can really be, zingy with lime and good ripe avocado, and came with fried corn tortillas which were almost perfect, just needing a few more seconds to fully crisp up. 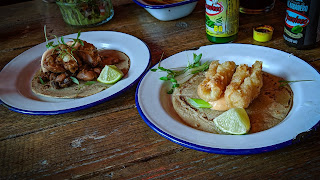 Elsewhere the frying was right on the money, crisp batter giving way to tender curls of squid on a taco lubed up with some moreish tom yum mayo. It arrived with a Korean fried chicken taco which paired a tender wodge of bird with a sprightly gochujang crema and some fall-aparty beer-cooked beans for ballast. Both came on tortillas that were full of delicious toasty cereal notes and perfectly pliable. 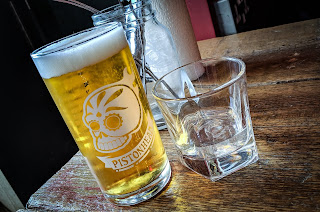 With a good stash of bottled El Yucateco sauces (the habanero one has got some poke) on the side, a pint of Pistonhead lager and a glass of smoky mezcal to wash it down, I was having a very good time indeed. 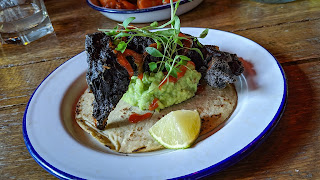 A whole soft shell crab in squid ink batter looked like a meteorite had landed next to a wedge of lime on a tortilla. It wasn’t possible to eat without getting into a mess, but was worth it, the batter not overpowering the gentle sweetness of the crustacean. 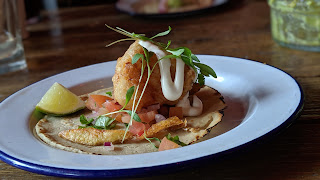 In other pescatarian news, a nugget of battered cod was flawlessly fried before being scattered with pico de gallo and lime crema. 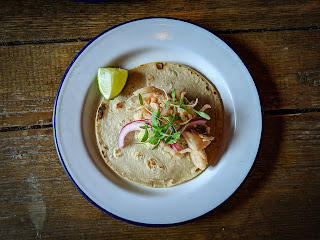 Vegans and veggies will be fine here. There are seven tacos that are good for vegans, including the jackfruit carnitas and Korean soy effort that we tasted. 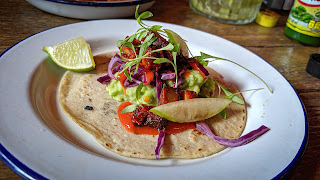 Both were lovely, marinades and seasonings getting as much flavour as possible into relatively unspectacular main ingredients. And they’re all sitting on the same lovely fresh tortillas as the meaty stuff anyhow. 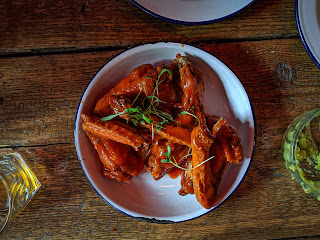 Feeling emboldened, we veered away from tacos to try a couple of the menu’s other offerings. Buffalo wings were merely decent - why does nobody joint them properly? Don’t they know I can’t be bothered to? - but were slathered in a great tangy hot sauce that either was, or tasted exactly like, Frank’s. 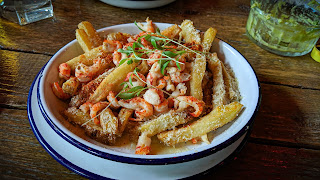 An off-menu special of crayfish fries was fun. 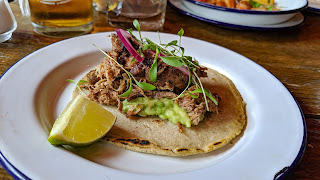 We finished with a carnitas taco - more like a straight up pulled pork recipe than the re-fried efforts full of crispy bits I’ve had elsewhere - and one of Korean pork belly. 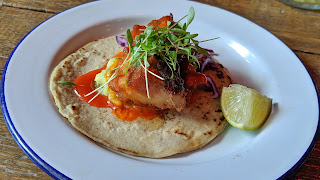 They were both excellent. You get the picture. 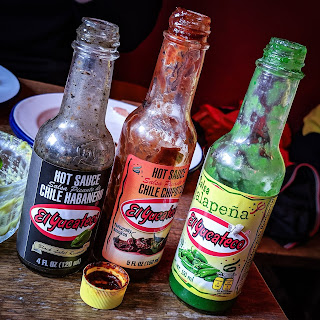 Mexico 70 is the second great thing that owner Neil Bassett has done that I know of, following on from the pair of rather lovely albums he put out as half of Hyde and Beast. He’s a man of many talents. Well, two at least. He, or someone he works with, has done their research, hired good cooks and created a little beauty of a restaurant. It’s by miles the most fun I’ve had eating out in Sunderland, but it would taste just as good anywhere else.

Postscript: Mexico 70 don’t do desserts, so we headed over the road to Amore Italia to see if they could do us a pud and a glass of wine. 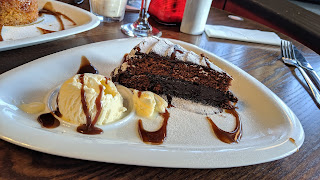 They were absolutely lovely about it, but the most positive thing I can say about the sticky toffee pudding and chocolate fudge cake that we tried was that their microwave is working fine. 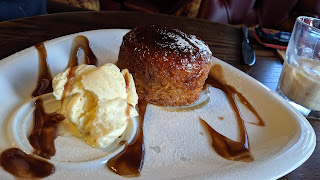 Come on Sunderland: you can do it!