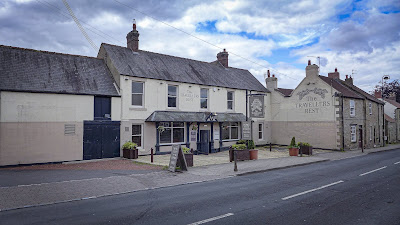 
There are two pubs near Durham called The Travellers Rest. One is in the sleepy little village of Witton Gilbert, just off the A691, and is the subject of this review. The other, in Belmont, is a low-slung lump of brick with billboards advertising Sky Sports and a “Thursday Sizzler night”. That’s the one that Google Maps took us to.

“Are you sure it’s here?” Mrs Diner asked, her voice betraying real concern as we watched a staff member cleaning out the ashtrays on the picnic bench just prior to opening.

I checked and, chastened, we hot-footed west towards Witton Gilbert. All of which pre-meal jeopardy was fine because I knew that once we’d actually found him, we were likely to be brilliantly fed by Ruari Mackay.


Some chefs are worth following around. From heading up Terry Laybourne’s Bistro 21 at Aykley Heads, via his Jay Rayner-approved (and my own rave reviewed) stint at The Garden House Inn, he pitched up here some six or so months ago. I assume the residents of Witton Gilbert ran out into the streets and high-fived one another at the news. 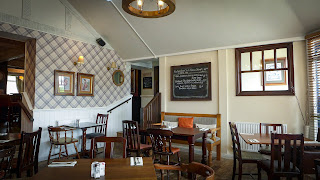 The pub itself is pleasing enough, with log burning stoves, exposed brick, a whiff of tartan, and an agreeable lack of TV screens. We were intercepted by a congenial waitress who clocked immediately that we were in the market for a sit-down lunch rather than a snifter at the bar, and showed us to a table in the light and airy rear dining room. 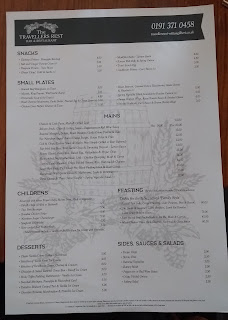 The whole set-up gives few clues as to the quality of food a weary traveller might expect. The menus on the other hand are reassurance in printed form: one look, and you know all will be well. 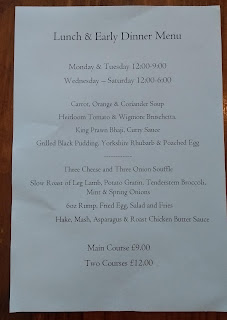 I pluralise menu deliberately, as there is a lot of choice. In addition to the full à la carte, itself divided into a myriad of sections running all the way from “snacks” to “feasting”, there is wildly good value lunch menu (two courses are twelve pounds), a sandwich menu (all come with soup or fries) and some chalkboarded specials. 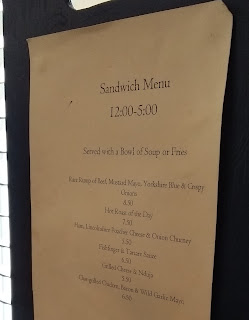 We ordered from here and there with greed verging on recklessness. 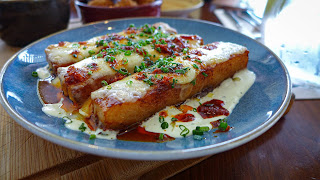 The first dish to arrive was the best version of cheesy chips I’ve ever had - and I’ve had a few. Who'd have thought this booze-absorbing staple could be turned into art? Thin layers of potato were compressed, cut into thick fingers and fried before being smothered with good cheese, mayo and ‘nduja. Phwoar. 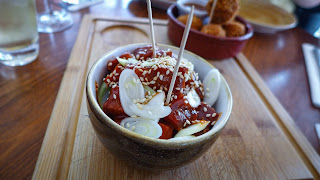 Korean pork belly, scarcely any less filthy, has made it from the Garden House menu to this, which is a good thing. Eating it was like rekindling the acquaintance of a friend who you know will lead you astray, but be great fun at the same time. The pork stood up admirably to having been long braised, fried, then hit with sriracha and spring onions. This is one of the great bar snacks. Order at least one portion. 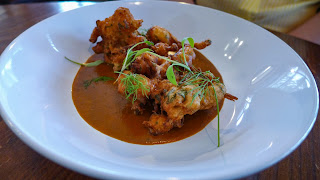 I hope it isn’t damning with faint praise to note that this kitchen has a talent for frying in all its formats. King prawn bhaji were knobbly lumps of fun, flecked with whole spices. They paddled in a pool of curry sauce the colour of rust that was deep, serious and ferociously good, but still had a bit of the chip shop about it. I love that. 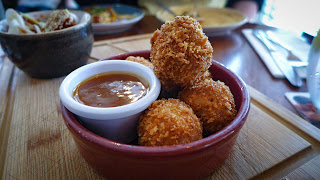 Gammon fritters were also jolly little orbs of crunch, salt and oink, and came with a great sweet/sour pineapple ketchup. Phew! By now, only halfway through our “small plates” (that’s a good laugh: they were massive), I realised we’d overdone it a bit. And yet on we pressed so as not to let you down, as it all just kept coming. 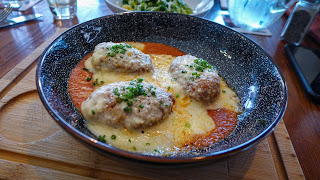 I had liked the idea of poshed-up Parmo chicken wings, but felt these didn’t quite work, perhaps needing something something acidic to cut through all the rich tomato and smoked cheese. 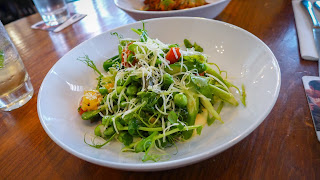 I was relieved to remember I had ordered a (very good) salad of barely blanched peas and asparagus, for its greenery was an island of calm among an ocean of excess, although it did still come slathered in a custard of Lincolnshire Poacher cheese. Decent, by the way. 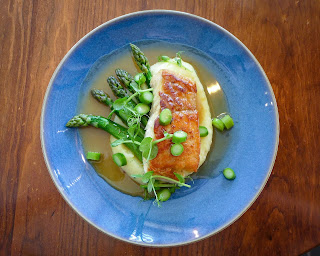 My hake main course arrived sporting a glorious crust the colour of Donald Trump and was accessorised by good mash, more asparagus and a roast chicken butter sauce that tasted of fingers dragged greedily through the remnants of the roasting dish; every bit as good as it sounds. This serious bit of cookery cost me, from the set lunch menu, nine pounds. 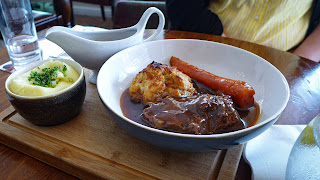 Mrs Diner’s featherblade with a cheddar dumpling was sticky and fall-aparty and beefy and lovely. 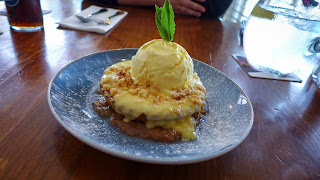 We shared a rhubarb tart which was merely nice, although by that point we were utterly stuffed and in no fit state to judge the quality of food. Indeed, it’s hard to be totally objective about this meal as, seduced by a wonderfully written - and massive - menu, we did the full Mr Creosote. If I have any criticism, it’s that a few dishes - both our mains for example - would have been even better if lifted by something pickled, fermented or otherwise acidic.

The bill for this outrageous episode of gluttony? Sixty-eight quid, including a glass of decent Primitivo and a couple of soft drinks. Stick to the lunch menu and you could have three courses and a glass of wine for barely more than twenty a head. That’s an outrageously generous offer for food of this quality.

I’d like to think that once in a while a weary traveller will alight here, not knowing anything of the place, order a dish or two on the off chance that it might be decent and be blown away. That would be tremendously serendipitous. I’m sorry to spoil the surprise if you were about to be that guest.

The Travellers Rest is now, thanks to Ruari Mackay and his team, a food pub of the first order. I urge you to pay it a visit. But make sure you put the right one in the SatNav.