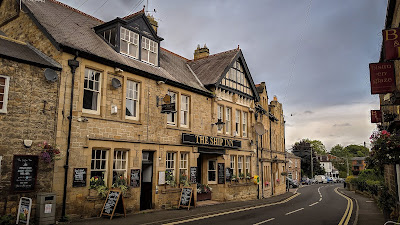 
When walking into a pub for the first time, I have a list of things to look out for that normally indicate whether or not the cooking is likely to be decent. Neither big television screens farting out rotating news nor tartan carpets are on that list. The Ship Inn in Wylam has both, as well as a number of other features that you'd expect to find in the category of establishment we call “country pub”. 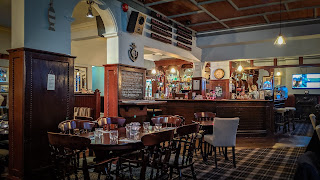 The thing is, it is definitely an actual pub. Some restaurants claim to be pubs, but try grabbing a seat at the bar and you’ll soon find you’re in the way of service. Not here. There were plenty of locals chatting over a pint while the world fell to bits in real time on Sky News. The fact that The Ship is also serving accurately cooked dishes hewn from fine ingredients in a room which hasn’t been Farrow and Balled to death only made me love it all the more.


I'd heard a few good things about The Ship Inn from people that I really respect, and a little light googling soon revealed why. It was taken over by Paul Johnson and Kelly Hopkins a couple of years back. Prior to this both worked in noteworthy establishments in Cornwall, Hopkins as a manager at the Metropole Hotel in Padstow, and Johnson as sous chef in what was Nathan Outlaw’s gastropub in Rock. I can only assume the locals in Wylam have been celebrating ever since they pitched up here. 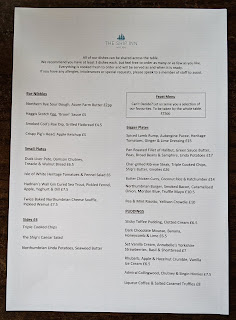 The menu is long enough to make choosing from it a fun problem, but short enough to make you think they will actually be able to do it all properly. There’s a steak, a burger, a scotch egg and a chicken curry. So far, so pub. But hang on a minute: the burger comes with Mordon Blue cheese and truffle mayo. And what’s that Katchumber stuff with the curry? Ooh, this might be good.

And it really was. That Scotch egg included haggis in the recipe, lending it extra texture and depth of flavour. The crisp crumb and runny yolk were straight-up textbook, but the “Broon” sauce - made with a bottle of dog, maybe? - had a molasses fruitiness that was joltingly delicious. 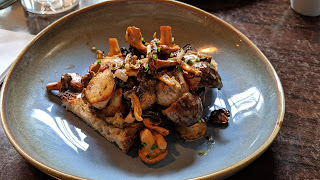 From a chalkboard of specials, we ordered wild mushrooms and black truffle on toast because how could we not? Eight quid got us a mound of butter-roasted ceps, chanterelles and who knows what else, all on a slab of Northern Rye’s zenith-grade sourdough. Too often ordering “wild mushroom” anything gets you a sad bunch of flavourless charlatans. These were the real deal, immediately transporting us to some secret patch of Northumbrian woodland. 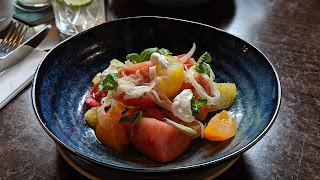 A simple tomato salad can only be as good as its primary ingredient, and these, from the Isle of Wight, were about as good as commercial tomatoes can get in this country (as you can tell, my visit was quite a few weeks ago). Coming in a variety of sizes and hues, they were dressed with little more than their own juices and perhaps just a splash of olive oil, then topped with basil, pickled fennel and dods of what I think was Yellison’s goats cream cheese. Simple, summery and lovely. 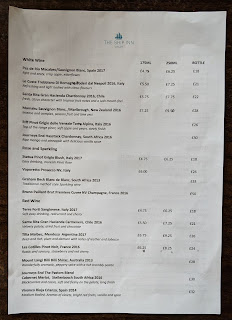 The wine list offered ten options by the glass, including a couple of less obvious grape varieties, which – hurrah – displayed the vintages. A Trebbiano from producer Poderi dal Nespoli was easy-going fun while a glass of ‘Vin de France Pinot Noir’ was all cherries and hedgerows and had as much about it as one could reasonably expect of a wine that cost six quid. Good times. Mrs Diner chose the latter to go with her burger. 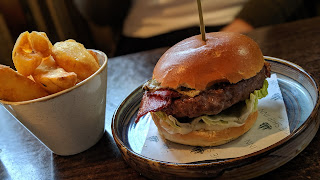 We had hummed and hawed over ordering it as too often our optimism has been dashed on overcooked, overstuffed pub burgers. Not this time. Everything in there did its job, from the thumb-thick medium-rare slab of beef to the salty bacon, sturdy yet squishy bun, funky blue cheese and lubricatory truffled mayo. Given that there were some strong flavours vying for attention, it was impressive that the iron beefiness of the burger still came through. If it hadn’t had just a bit of that odd, slightly tight texture you get when burgers are made a while ahead of being cooked, it would have been perfect. 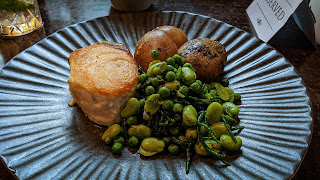 A main course of halibut for seventeen quid is a relative bargain, and one that I was happy to snap up. It came as a neat cylinder, sporting a burnished crust and peeled easily away into lovely thick flakes. If I’m going to be a spoilsport about it then it was a touch overcooked, but, taken with the accompanying pile of heavily buttered peas, broad beans and saline samphire, still rather delicious. 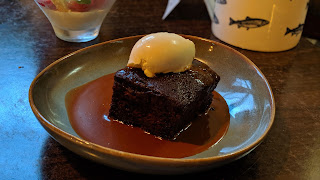 We had enjoyed everything up to this point so much that I’m almost willing to overlook a sticky toffee pudding that was no such thing (just a standard-tasting sponge, swimming in a sweet sauce that, oddly, tasted a bit chocolatey). 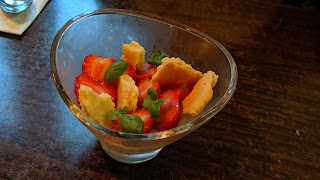 We also tried a dish of vanilla cream and strawberries that was pleasant enough without setting any pulses racing. Make the puddings worth the calories. Let’s move on.

Service, from Hopkins herself and one colleague, was predictably assured, personable and on the ball. She and her partner have done a great thing here by showing that it is possible to serve great food in - and honestly, I mean no disrespect when I say this - an unprepossessing British country pub. If I lived in Wylam this would probably be my living room. A pint of something decent and one of those Scotch eggs? Too right.

If you haven’t been then do check them out, whether you fancy a quick drink or a proper grown-up meal. They’ll do either for you. Really, really well.