Accessibility? Yes
Gluten free? “Gluten free pizzas available, but not suitable for coeliacs due to environment”


Until pretty recently, if you were to ask me where in Newcastle to go for a sit-down pizza that’s a step (a lot of steps, actually) up from your standard cheapo pizza/pasta job, there would only be one answer: I'd be sending you to Cal’s Own.

But, just like the Number 1 bus through Heaton, you wait years to have somewhere else do good Neapolitan style pizza and then three show up at once. Who doesn’t like choice? When it comes to pizza, not me. Flint Pizza on Chillingham Road looks the part, and I’ll reporting back before long, but first let me tell you about the bricks and mortar gaff from Street Food veterans Scream for Pizza.
With apologies to all you jeopardy fans, there was never really any doubt that we were going to eat pretty well at their new headquarters in Sandyford. Alex Walker and Vicky Featherby have been turning out the good stuff from their van at events up and down the region for years. Whether at a Boiler Shop Steamer, outside the Free Trade Inn or By The River Brew Co, I had always been impressed at their ability to knock out really great Neapolitan-style pies in spite of a distinct lack of lack of elbow room. It stood to reason that with more space, a serious oven and some staff, the pizzas would be better still. 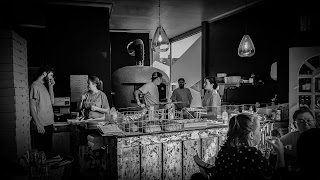 What they’ve also done, though, is to create a small but perfectly formed cracker of a room in which to eat them, turning the former Sapori Café site on Starbeck Road into a purple walled, parquet floored looker.

We swung by just half an hour or so after opening time. The restaurant was already busy and by the time we left our table was one of the first to be turned. There was a lovely buzz about the place, the sound of expectations being met. It had the feel of a well-established neighbourhood restaurant, one that had been around for years, not months. All very impressive. 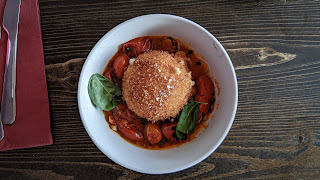 Burrata is a low-maintenance way for restaurants to please the crowds, but that doesn’t make it any less delicious. The Scream For Pizza team were breadcrumbing and deep frying theirs when we visited. It spilled its creamy guts attractively onto a bed of chunky arrabbiata sauce, the whole business descending quickly into messy tug of war between the lactic and tomato factions. 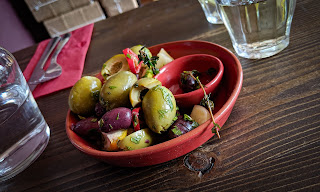 A bowl of rather fine marinated olives, with sprigs of thyme, transported us to the Med. Funny how thyme can taste alternately and equally like purest Blighty, or a scorched Greek hillside, depending on the context. I digress. We were obviously here to try out the pizzas. 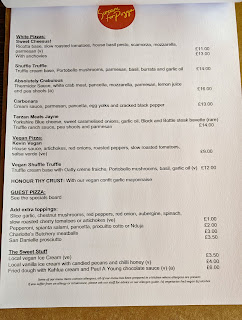 The menu splits them into red and white categories and bestows them with jokey names, which is worth noting for the point it represents. While the pizzas here are Neapolitan in style (thin base, puffy outer crust, wet, almost soupy in the middle) and made by people who care, they don't appear to be bothered by the purist AVPN rules and regs that Cal’s Own is so proud to follow. Does that matter? Not if the end result is delicious, and it really is.

They use San Marzano tomatoes and proof the dough for 48 hours, and that's all fine by me. There are some pretty good non-AVPN-accredited pizza places in Naples - and a whole ton of them elsewhere in the world. One of my favourites, Nancy Silverton's Pizzeria Mozza, makes a trip to L.A. an essential part of any worldwide pizza pilgrimage - judging by the queues, I doubt Ms Silverton cares about not having a little AVPN stamp on her website, but she does have a Michelin Bib Gourmand. Mind you, Cal's Own remains the only pizzeria in the world with a 5 star Secret Diner sticker in its window. 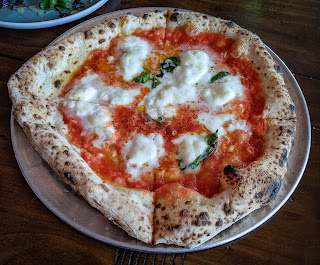 Back in Sandyford, the Margherita - sorry, “Wor Margaret” - was bang on: the tomato sauce tasting clean and bright as it liased with the gentle funk of the buffalo mozzarella. The oven - a British made Gozney, rather than anything imported from around Naples - bestowed the crust with spots and char in all the right places. For eight quid, this is a simple but almost perfectly realised slice of pleasure. 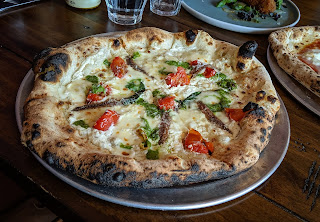 Meanwhile Mrs Diner was busy tucking into the “Sweet Cheesus!”, a fromage-tastic collision of melty scamorza, mozzarella and parmesan on a ricotta base. We added some anchovies to cut through all that dairy. There’s no getting away from it: this thing was pretty smutty, but nonetheless compelling. The crust had developed quite a char, the bitterness of which also worked well against its beige blanket of cheese.

We went a second time and the dough didn’t seem quite so light or ridiculously edible. Could that be due to the absence of both owners, presumably in attendance at some street food gig or other (the opening of this site hasn’t signalled the death of the van, apparently)? No idea. In the very early days of Cal’s Own I used to moan when Cal himself wasn’t in attendance. Despite this, by any metric these were still pretty good pizzas. 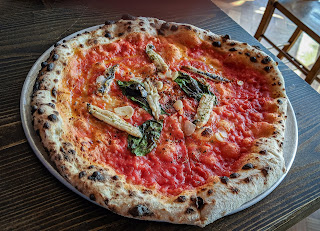 The marinara really showed off the uncomplicated sauce founded on great tomatoes, while “Tarzan Meats Jayne” pitted Yorkshire Blue cheese against bavette steak. A bit like one of those Greggs Steak and Cheese rolls – just a million times better. 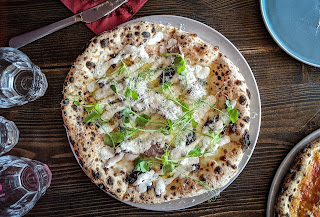 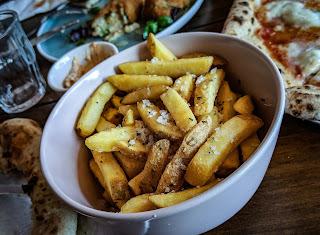 Their chips are crisp, rustly and good, especially when dredged through their confit garlic mayo. 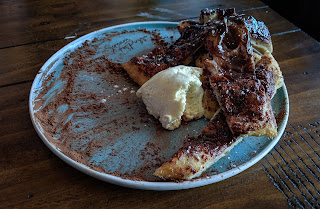 The only dessert that wasn’t ice cream was some fried dough which came with Kahlua cream (bit light on the Kahlua) and some of Paul A Young’s righteous chocolate sauce, so we got one of those. It was fine.

But this isn’t really a place to linger over three courses. It’s somewhere to eat great pizza to good tunes (Italo Disco when we were in, which is right up my personal strada) on not terribly comfy chairs. Which is also fine: there are comfier restaurants elsewhere, if that’s what matters to you. 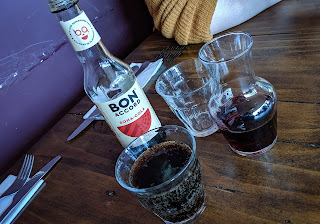 The wine list is short but reasonable. The Fattoria di Rodano Chianti was a tangy cherry little number. 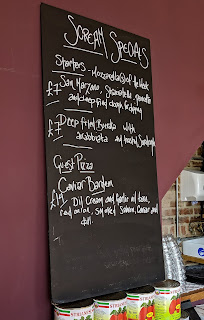 Service was friendly although they did once or twice seem more concerned about taking pictures of pizzas than of checking if we needed anything. Schedule your tweets and Instagram posts maybe? But never mind such minor whingeing on my part: the transition from street food slingers to proper restaurant has been handled beautifully by the girls and guys of Scream For Pizza. All power to them.