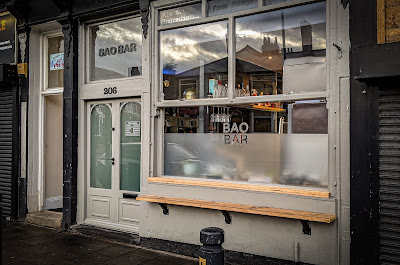 
If, as is often alleged, good things come in small packages, does it follow that exceptional things come in tiny packages? Logic never was my strong point, so I’ll leave this abstract musing to the more philosophically minded amongst you. What I can tell you is that Mrs Diner and I certainly found some evidence to support this thesis during a dank wintry weeknight on Chillingham Road. 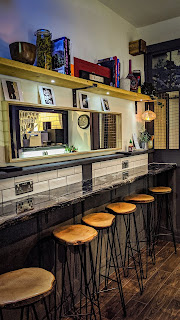 Bao Bar is indeed tiny. There is barely space in there to swing any sort of mammal at all, never mind a decent sized cat. I counted twelve funky, bespoke-looking stools, six at a marble-topped and smartly tiled counter which afford an excellent view of your food being prepared, and a further six against the back wall, which do not. Assuming that you do manage to get seated however, you will be wonderfully well fed by people with an unerring knack for making things taste great.

Edward Evans and Richard Wheatley are the chefs and business partners behind Bao Bar. They got good at this kind of food while working as private chefs for a client in the Middle East. Bao - those pillowy-soft steamed breads that always remind me a bit of Pac-man - are the mainstay of the menu here, although they are also putting on a regularly changing selection of other small plates. 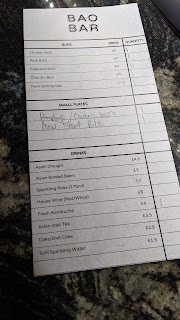 You order by putting the number of any particular dish you want on a pre-printed score card, and then the fun really starts. 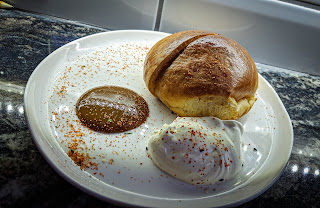 Their pork char siu bun was an upmarket version of the classic, the slightly sweet brioche having a lovely spring to it, and benefiting from being served warm. The filling was just a complete umami-bomb, and lacking entirely the gristly bits that can afflict more workmanlike versions of the dish. A puddle of okonomi sauce - a hyper-condiment made from ketchup, Worcester sauce and honey - ramped the savouriness up yet further, while a scatter of shichimi togarashi looked pretty and added a touch of spice.

Interestingly, they’re not making the buns for the titular dish themselves. Evans told us that they did when first opening, but couldn’t make them quickly enough, so are now importing them from frozen from Taiwan, and have spent some time figuring out how to get the absolute best out of that product. They’ve nailed it; the end result is fluffy and sprightly, with a perfect bounce. We didn’t know whether to eat them or rest our weary heads on them. Ok, actually we did, but you get the picture. 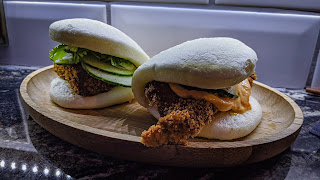 Both pork and chicken were crumbed and perfectly fried before being popped into bao and accessorised by hoi sin and kimchi respectively. Biting into one of these was a multi-textural joy, featuring crunch, squidge, zing and bosh, all in one pupil-dilating mouthful.

It’s not just the food that has been put together with a focus on quality, though; the drinks game is strong here too. I was in possession of the car keys, so tried their kombucha, which was funky almost to the point of vinegariness, but was powerfully refreshing and tasted like my gut microbiome would appreciate it. Mrs Diner tried a sparkling red Lambrusco which was a minor revelation, having just enough fruit and tannic grip to complement the spicing of the food.

Service mostly consisted of Evans putting dishes in front of us and telling us what they were, while fielding all of our slightly geeky enquiries with easy charm. Thumbs up for the selection of tunes, too, which I’m going to describe to you here as “mellow dancey bangers”. Yeah, that’s right: I know my EDM genres.

Let’s swiftly get back to the safer territory of describing food. 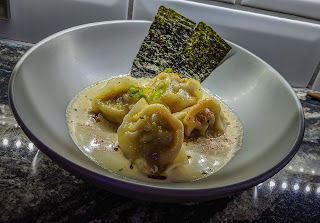 Steamed chicken dumplings had just the right amount of bite to the dough, but the star of this particular show was the chicken broth in which they wallowed, a milky lotion of preternatural depth of flavour. 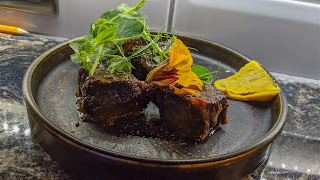 Mahogany cubes of long-braised wagyu short rib were almost as impressive, having been gently cooked to the point at which they wobbled on the plate like a good panna cotta. On the side came a bowl of almost violently good pickles, including some celeriac stuff that was flat-out ambrosial.

Every now and then someone would come in to pick up takeaway. I jealously cursed them for their proximity to such unusually great Asian food. 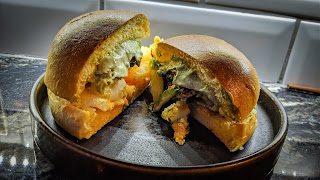 We consoled ourselves with an eggplant bao in which the vegetable wore just the thinnest layer of frilly tempura batter to cover its modesty, and another brioche-style bun which housed tender-fried rock shrimp - tasted like lobster - and some sort of delicious mayo-type substance. 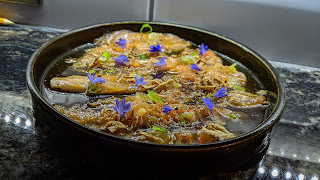 Raw fish would more sensibly have come at the start of this meal, before our tastebuds were blattered by so much superior umami action, but the couple next to us had a plate of salmon sashimi which looked so pretty we decided to get in on it too. It was merely very nice, although thoughtfully put together, featuring the citrus tang of yuzu and some sort of dried fish skin, with borage - I think - flowers providing a pop of colour.

Thoughtful is a word I would use to describe all the food at Bao Bar. Yes, much of what they’re doing could loosely be termed “street food”, but they have the skill and equipment, and have taken the time and effort, to make it as delicious as possible. 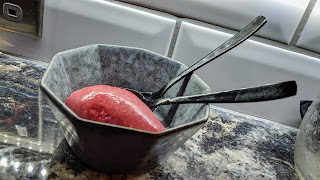 Case in point; as we got ready to leave we were presented with a strawberry sorbet, fresh from the Pacojet, “to cut through all that grease” as Evans put it, with a smirk. It was, you will not be surprised to hear, utterly smooth and the very essence of strawberry.

I get the sense that Evans and Wheatley may only just be getting started. In the few months of Bao Bar’s existence they have already brought lots of new dishes to their original offering. Whether they focus on developing this concept further, or look to trade up to something a bit more big and “serious”, who knows. But for the time being, you need to get yourself to Bao Bar. This was one of the most fun meals I had in 2019. These guys have got a proper talent for deliciousness; get involved.