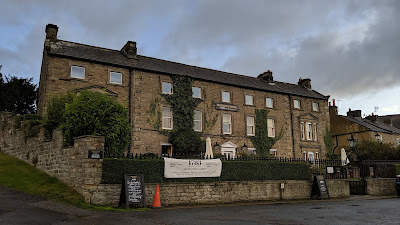 I’ve endured some pretty duff meals in hotel restaurants over the last couple of years. The full spectrum, in fact: from stuffy country house piles serving terribly average food on big plates designed in vain to make you say “ooh, fancy!”, through to places struggling to maintain the standards across all their various and divergent offerings, all the way to gloriously inept experiences straight out of the Fawlty Towers playbook.

So, when The Burgoyne Hotel in Swaledale contacted me to ask me to consider a review I was minded to hit delete, until I clocked that the manager there is the former owner of Truffle, a restaurant in Darlington that I had very much enjoyed and was sad to hear had closed. So I kept hold of the email but, as Peter Cook might have said, immediately did nothing. I gave it a couple of months, booked in under a dastardly fake name, then hooned down the A1 to Reeth with Mrs Diner in tow, full of hope for a nice night in the country.

Swaledale is lovely in a rugged, occasionally barren kind of way. It looks a bit like the Lake District, just without the lakes. There are scree-topped hills and dry-stone dyked fields full of sheep. Lots and lots of sheep.

The Burgoyne - formerly Hill House - became a hotel after World War II. A grand but not-too-imposing lump of stone, it sits sturdily at the top of Reeth village green. 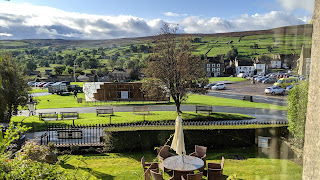 Our room offered fine aspects south over the river Swale to the patchwork of fields beyond. We had a good stare at the view, then nipped downstairs for dinner. 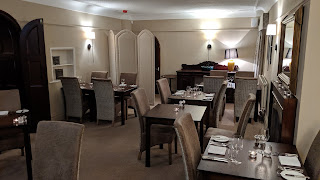 The restaurant has its own name - 1783 - presumably so as to suggest that you don’t necessarily need to be staying in the hotel to eat here. However, I’d be surprised if many locals are popping in for two courses from the fine dining menu at an enthusiastic thirty eight pounds, which is a shame. If you stay on the DBB deal as we did then the cost of two courses is included. There is also a less fancy menu available, with burgers, fish and chips and whatnot. Well, I didn’t drive this far for a burger. 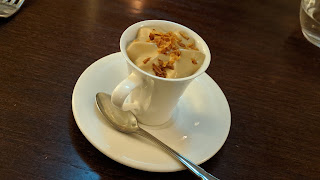 It was quickly apparent that we were in safe hands. An amuse of nitro’d veloute of mushroom was denseness and light all at once, and full of shroomy umami. 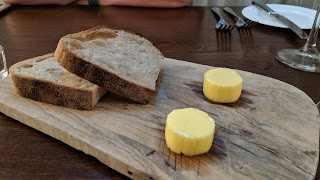 Bread had a lovely waxy crumb. I ordered some Château de Fleurie and relaxed. 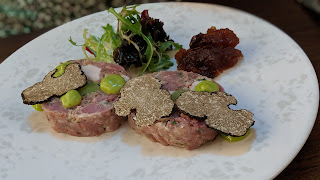 Ham hock terrine can often be an also-ran, lazy starter, as all the prep is done ahead of time. Not here. The well-seasoned ham had a lovely loose texture and was studded with lumps of moist smoked chicken. It was topped with a leek purée and whacking great slices of truffle that - praise be! - actually smelled and tasted like that haunting, heady fungus should, without any hint of having been given a leg up from the cheat’s favourite trick- “truffle” oil. I asked where the truffles came from and was told “Delifresh”, which was an answer of sorts, if not quite the one I was after. I like the honesty, though. 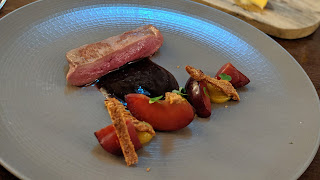 While Mrs Diner demolished that lot, I was setting about a nicely rare piece of duck breast, moistened by a rich cumberland-style sauce and served with nubbins of its own crackling and some plums and wood sorrel for acidity and freshness. We started to get the picture: quite a lot happening on the plate, but handled with enough care and skill to make it all work. 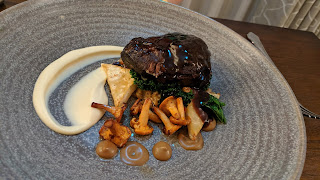 A butch lump of fally-aparty ox cheek (why are they always oxen when we’re eating their cheek but not, say, their rib-eye?) came with a seriously bloody tasty porridge of barley, made with who knows how much boiled down stock, wodges and a purée of celeriac (seasoning perfect, again) and some lovely buttery chanterelles. An excellent dish. 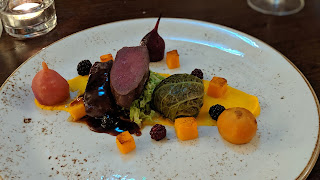 My venison came as a blush pink bit of loin and a savoy cabbage leaf stuffed with the cheaper bits. Another complicated garnish of beetroot, blackberries, sautéed and puréed squash and a fine sauce was prevented from being overly fussy by the quality of the cooking - competence leaping off the plate.

It turns out that this was in spite of head chef Thomas Pickard being off the night of our visit. Indeed, judging from his twitter account he may be off every night, as he is now apparently at The Fleece in Richmond. Assuming his sous chef Tom, who cooked for us the night of our visit, is still in post, you’ll be fine. 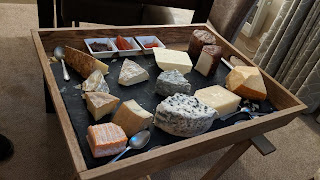 Regardless of the chef, they will at least have an excellent cheese board. This looks a lot like the one I enjoyed so much at Truffle. Fun, fun, fun, including a fine aged Gouda and a smear-ripened thing from Wales called Celtic Promise. Yum. 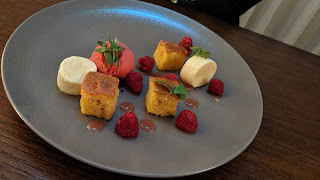 The only real dud dish of the night was the one pudding, something called Yorkshire oil cake. Is cake with way too much vinegar in it a thing in Yorkshire? Either way, count me out. This was rank. One other grumble: if the decor in the dining room is a bit beige, then the music was magnolia. James Arthur, Robbie Williams and Abba saw us through dinner. Time for a playlist refresh, guys.

The Burgoyne is doing lots of good things. Staff were all lovely. There is a cosy lounge. It would make a fantastic, comfortable base from which to do a bit of serious hiking. The eggs Benedict for breakfast were not bad at all. But, speaking selfishly, they - at least temporarily - restored my faith in the possibility of finding good eating in a hotel. For that alone, I was more than glad to have made the journey.