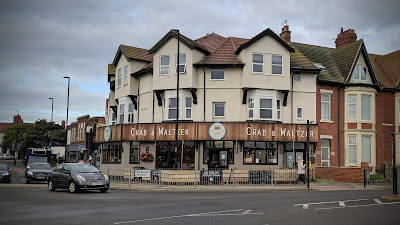 
The literalist in me was delighted to find that Crab and Waltzer, on the seafront in Whitley Bay, isn’t named because of some flight of whimsy on behalf of the proprietors but as a reference to things which can actually be found within its walls. If you are so minded, and manage to grab the relevant table, you will indeed be able to sit in one of the cars from an old waltzer. And, once thus seated, you will be able to order dishes containing crab. If you’ve always wanted to eat crab in a waltzer, well, this is clearly the restaurant for you. You should probably stop reading now and book a table. But for those of us with less niche tastes, this is also a place that does a few other things rather well too.

Firstly, it’s just a really nice and really easy place to be. It stretches around the corner of Marine Avenue and The Links, affording a panoramic view out to sea. Tables are well spaced out with seating varying from slouchy wing-backs and stools to comfy wooden chairs and the aforementioned chunk of fairground. There is something to suit every class of posterior. Poles running from the floor to the ceiling have been painted like old fashioned straws and up the back of the place they’ve got tables done out as cute beach houses, just so you don’t forget where you are. 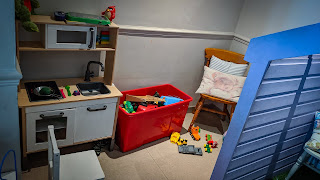 In an eminently sensible move, there’s a kids play area with an IKEA kitchen installed. There are seats outside for when conditions are mercifully clement. On the afternoon of our visit there was a welcoming buzz about the place. 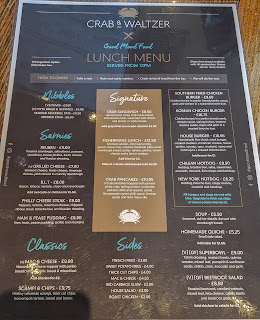 The lunch menu is a bit of a hodge-podge of apparently unrelated things, but significantly more interesting than your standard seaside café. Crab is offered in both sandwich and pancake format, the latter coming with a host of southeast Asian accoutrements. There is soup and quiche and scampi and chips. But: hello, what’s this? A Reuben? A New York hotdog? A Korean chicken burger? Intrigue! 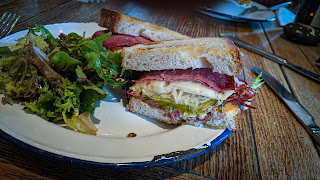 The Reuben wasn’t quite a Reuben, coming as it did on toasted sourdough rather than rye bread. It was however, delicious, settling the argument as to whether a true Reuben should contain smoked pastrami or unsmoked salt beef by including both. That is the kind of diplomacy I can get on board with. The other key flavours - Russian dressing, sauerkraut, swiss cheese - were all present and correct, and the experience of that all important first bite - crunch, squidge, kapow - was just about spot on. I could have done with a few more slices of salt beef, but still: this was a very good sandwich indeed. 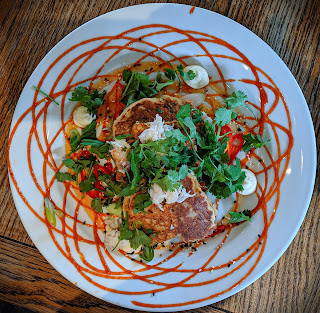 The crab pancakes were rather less great, despite coming on a plate that had been impressively dressed with concentric circles of sweet chilli sauce, the effect being reminiscent of the designs I used to create on my Spirograph. The pancakes themselves were very much on the lumpen, stodgy side and, assuming they contained brown crab meat, I could barely detect its flavour. A freer hand with the white meat that topped them would also have helped. The coriander, spring onions and lime mayo scattered around the place were all fine, but a new recipe is required for the main act here. 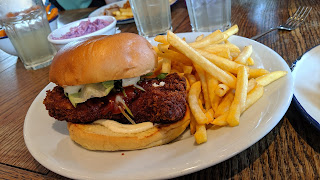 Mrs Diner’s Korean chicken burger was better, but also needs a bit of work. The real deal tends to be marinated in rice wine and spices for moistness, dredged in a light batter then always fried twice, for serious crunch. What we had here was a rather dry, slightly dull wodge of pankoed breast in a bun, topped with a blob of gochujang style sauce, which isn’t the same thing at all. It wasn’t awful, but a bit of research and testing could make it an awful lot better. 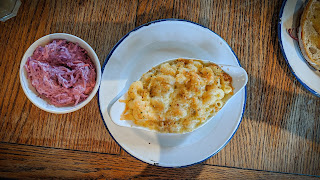 Sides were evidence that the kitchen here cares. Red cabbage slaw was sufficiently crunchy to indicate it was freshly made and had plenty of mustardy poke. Mac and cheese had begun life as a velvety bechamel base, and came crowned with toasted breadcrumbs. The Junior Diner in our custody enjoyed this dish very much, when we could tear her away from that IKEA kitchen in the corner.

Service, once we had ordered at the till, was swift and super friendly. Beverage-wise, it was coffee and soft drink all round. The former was serviceable if unspectacular, and the latter included Fentimans ginger beer, so that’s fine by me. They do have a wine list, which presumably sees most action on a Friday and Saturday when they are open into the evening. 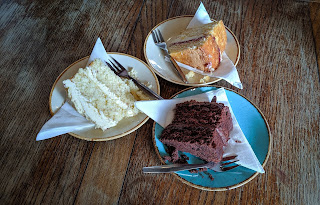 Puddings were laid out on the counter, rather than made to order. We tried a trio of cakes, including a white chocolate number and a Victoria sponge. All were nice without being devastatingly so.

Crab and Waltzer is a good café and restaurant that could, with just a few tweaks here and there, become an excellent one. It is blessed with such a fine location, at the heart of Whitley Bay’s rejuvenated seafront, that the question of how good their food needs to be in order for them to have a successful business is moot. They are still likely to benefit from significant passing trade even if the crab pancakes aren’t lightness itself. That kid’s play area is going to be a draw even if the Korean fried chicken needs a little work. But the fact that those things are on the menu at all shows encourageable ambition of the sort that suggests they do want to do things well. It wouldn’t take too much to make everything on the menu sing.

In the meantime, if I ever fancy a Reuben rather than a fish and chips while at the coast, possibly to be enjoyed while sat in a waltzer, I know where to go.