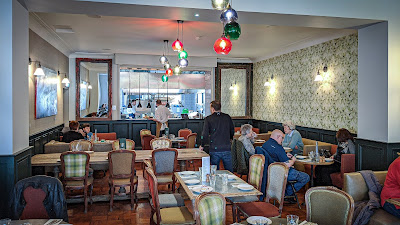 Man, I love a good pudding. Is anything so totally unnecessary yet quite so important as pudding? We all need protein and carbohydrates and fats and stuff like that to survive, a fact that can render that lot a bit workaday and utilitarian. On the other hand not one of us requires sugar. This makes it, literally, a luxury. Pudding is the Cruyff turn of the meal time, the over-the-top cadenza, the showy literary ending of the last chapter. Pudding is what happens when food becomes more than just sustenance. It is culture, nostalgia, comfort and joy.


It was as our puddings hit the table at The Beaumont Hotel in Hexham that I knew this would be a five star job, because here was that wonderful and sadly rather rare thing; a kitchen that does proper desserts. None of that creamy whatever in a bowl with crunchy gubbins on top, neither the bought in “sticky toffee pud” nor any of the other half arsed efforts that otherwise commendable restaurants sometimes get one of the commis chefs to push your way as if to ask the unspoken question: “will this do?” 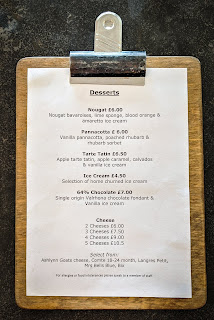 Well no, actually, it wont. So praise be for proper pastry chefs such as The Beaumont’s David Simak, and hallelujah for his chocolate fondant, panna cotta and Tarte Tatin, all of which were exemplary. 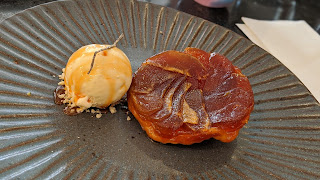 The latter was straight out the textbook; crisp pastry that revealed itself in layers and sweet-sharp apples, welded to one another by a fine caramel. 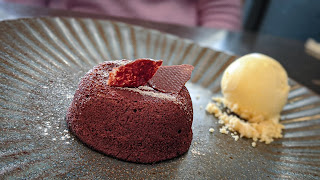 The fondant was well made - nice sponge, gooey centre, all that stuff - but won the day by the employment of a superior ingredient, in this case French Valrhona chocolate, packing serious cocoa heft. 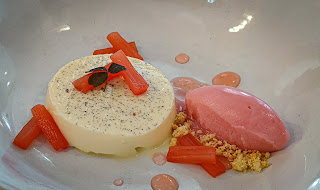 Meanwhile, the vanilla-speckled panna cotta came with dinky batons and a bracing sorbet of new season rhubarb, the sharpness cutting through the richness of all that dairy. What’s better than a good pudding? Three really good puddings, that’s what. 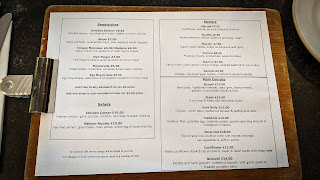 All this jollity came at the end of what was one of the most assured, accurately cooked and flavour-forward meals I’ve had in quite some time. I had heard tell that The Beaumont had got their food game together under the leadership of chef James O’Brien, who previously has worked for Michael Caines and Stuart Muir, and I am pleased to confirm those rumours. The menu consists of an appealing range of bistro-style dishes, each doing something just a bit nifty or adventurous sufficient to provide moments of real enjoyment. 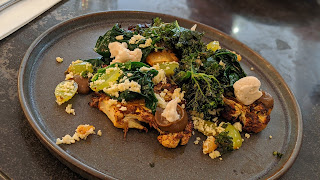 Take, for example, my main course of roasted cauliflower. All very lovely, with the veg thoroughly caramelised and the ras el hanout spicing building insistently during its eating, but the addition of a caper and raisin puree, fruity and punchy like some zenith-level brown sauce, was an act of minor genius. 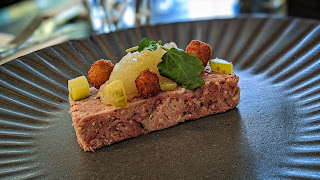 Again with my starter: a precise cuboid of pressed pork with just about the perfect fat content was nice enough, thanks, but tiny little croquettes of smoked eel pulling in one direction and dinky pickles tugging in the other, gave the dish interest and depth. Solid technique and a real understanding of flavour was in evidence in dish after dish.

Service was as polished as the food. We were all off the booze and on the council pop, but even this was regularly topped up without so much as by your leave. An enquiry into the difference between skrei cod, which was on the menu, and bog-standard cod resulted in an immediate and comprehensive rendition of the merits of the former (it’s a seasonal, migratory, lean fish caught around Norway, now that you’re wondering). None of that “I’ll ask the chef” stuff here. 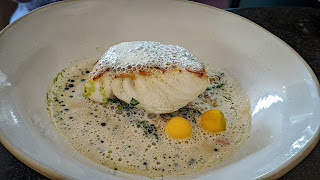 And that cod was quite delicious, a hulking, flaking fillet of the stuff sitting in a foaming broth of mussels and brown shrimp, given smoky depth by some Morteau sausage, seasoned by samphire and lent ballast by some dinky buoys of saffron potato that gave it a lovely summery feel. This was a tremendous dish. 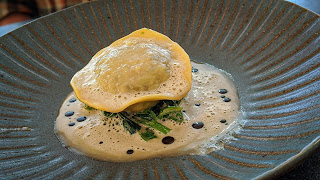 Elsewhere, more good technique. A raviolo starter featured excellent pasta and an unusually chickeny chicken filling, lifted by tarragon, and given umami thrum by an earthily good mushroom sauce. The thing put me in mind of a very, very fine chicken and mushroom pie. A cauliflower soup had about a herd’s worth of dairy in it, and was no worse for that. 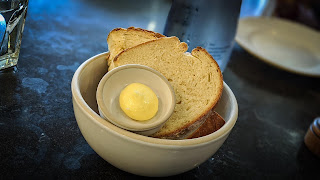 Bread tasted like it had been made in house... 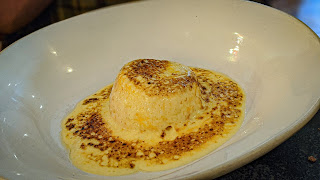 ...and a twice baked souffle will win no points for originality but this one, light and rich all at once, was super cheesy and totally worth the calories. And then we were on to pudding, and I think I’ve mentioned that already. The bill came to around thirty pounds per head for three courses, including 10% service although no wine. That's excellent value.

Eating all these impressively refined bistro classics while perched in the attractive dining room of The Beaumont - parquet floors, marble-topped tables, busy wallpaper - made for a joyful lunch. On a Monday afternoon, there was a decent trickle of diners, enough to keep a kitchen ticking over while sorting the prep out for the evening. Natural light flooded in through the French doors that face onto Hexham Park, in which carpets of snowdrops heralded the coming of warmer times ahead. Dish after dish was as good as you could hope for, and occasionally a little better even than that. I think that’s about as much as any of us could ever want, really.

Cooking this assured deserves to find its audience. I'd encourage you to book a seat for the next showing you can fit into your diary. Tell them The Secret Diner sent you.