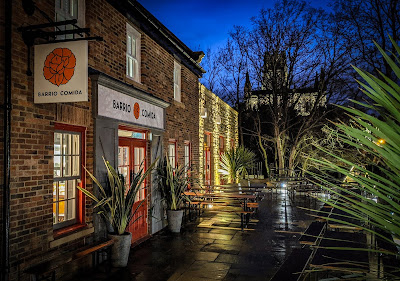 I normally spend a few days looking forward to a meal out. Always with optimism, you understand - I'm a glass half full kind of guy (especially when the restaurant has a decent wine list).

Sometimes the anticipation extends to a couple of weeks, certainly if it’s somewhere a bit fancier. You’re only talking months when it’s some gastro-palace with more chefs than punters, or an up-and-comer that threatens to smash up a paradigm or two. So if I tell you that I had been looking forward to eating at the new Barrio Comida for about two and half years, understand that this was a meal shouldering an awful lot of expectation. 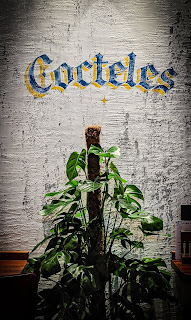 That’s how long it is since Shaun Hurrell and his team left their temporary home in the shipping containers next to the Newcastle Quayside “beach”. In its short existence it made something of a fanboy out of me, not just because of the tacos, which were wonderful, but just the whole kit and caboodle. The faint whiff of woodsmoke as you slid open the door; the immaculate taste in hip hop that belonged to whoever did the Spotify playlist; the sense that this was something really, really good, being offered by people who cared, at a price that was incredibly inclusive. 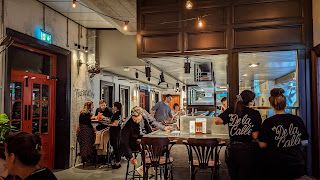 And so, finally, after the odd false dawn and a fair bit of delay, here we are. Sat in this beautiful new restaurant in Durham with the flattering lighting and the polished concrete floors and the cool stenciling on the walls punctuated by attractive plants of some sort or another. 'What’s Up Fatlip?' is on the stereo and honestly it feels like this whole setup is pretty much custom designed for my needs; maybe it’s just not fair to expect any meal consisting of discs of toasted corn with stuff on them to carry that weight of anticipation. 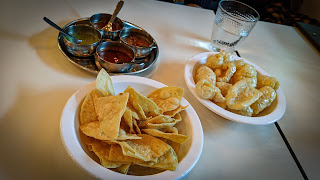 Lest there be any doubt at all, we had a very good meal. Some of it was wildly delicious, and I’ll tell you about that in a minute too. But I’d seen the Wallace and Gromit-style Lenin taco production set-up, and perved over the Insta-stories about grinding nixtalamised heirloom corn rather than using masa harina and expected...what exactly? I don’t know. Life-changing fireworks with every bite from a restaurant that was open for a week? Maybe. Is that fair? Probably not. 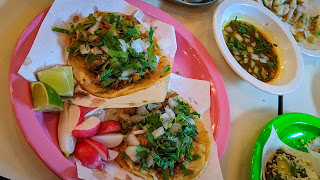 Let’s start with the stuff that was unequivocally, uncomplicatedly great. The Birria taco, derived from the famous spicy Mexican goat stew, comprised tender shreds of long-cooked meat (lamb here, though it had such a punch I would have guessed hogget or mutton), topped with coriander and raw onion; its highly seasoned broth was on the side - it had depth and breadth and was just ludicrously tasty. As rich as any goat. Also fantastic was the mole poblano sauce which topped a chicken taco, a righteous lotion which was dark and sultry and somehow tasted of the exact, perfect moment before something goes burnt and bitter. I remember this fondly from Barrio 1.0. If anything it was better now than it used to be. 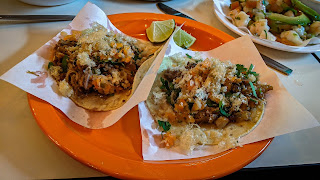 Some tacos have developed slightly with the new premises, taking advantage no doubt of a radically larger and better equipped kitchen. Carnitas now come with crumbled puffed pork rinds for crunch and an escabeche sauce for acidity. 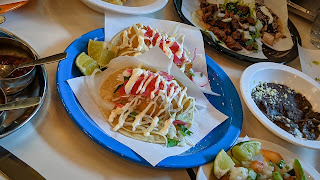 Others have stayed exactly how I remember, like the fish taco which still features feather-light batter and some tingly pink pickled onions.

Elsewhere though, scaling up has made things a little less refined. More generous perhaps, but also less elegant, and not quite so laser-guided delicious. 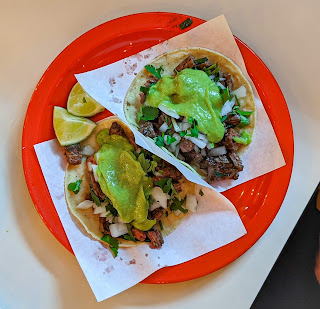 Steak tacos tasted a little under seasoned, and were rather swamped by a liberal dollop of guacamole. 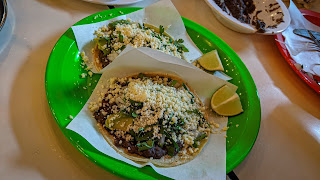 Frijol tacos came with a crumble of nice fresh cheese, but the mound of beans that performed the central act was a little flat and uncomplicated in flavour. 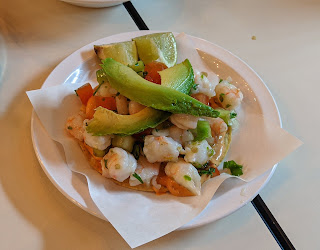 I should have preferred the prawn tostada if the advertised ceviche contained raw rather than cooked prawns... 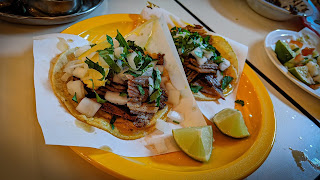 ...and the pork on the al pastor was a touch dry. The quartet of salsas that come with our tortillas at the start were fresh and nice, but didn’t send any of our trio into raptures.

I feel like a chump criticising Hurrell’s corn tortillas since he knows infinitely more about the topic than I do, but here we go anyhow. They were beautifully supple, springy things, but the flavour was a little meek, lacking the cereal corn thwack that I was expecting. I would have liked to see them cooked just a little longer, or maybe hotter, too, to pick up a few flavour-giving char marks.

Back to the positives: service was tremendous, from a youngish squad of well-trained and enthusiastic people who, despite clearly being up against it, were hospitality itself. We felt properly looked after. I’m assuming the fact that each plastic plate we received was a different colour means they’re colour-coding the tacos to make life easier for the servers. Smart move. 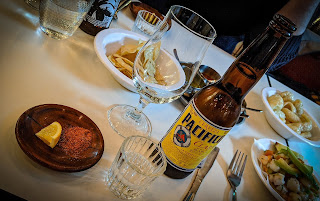 If you have any interest at all in spirits derived from agave, you will enjoy yourself here. From a vast list which needs more interrogation, the Tobola mezcal that I tried from the La Medida range was earthy and smokey and would be a treat for anyone who enjoys Islay whisky. It was served with “worm salt”, which I think may have contained actual ground-up moth larvae. Whatever: it was a bit spicy, quite smokey and delicious. The mezcal went down a treat with a bottle of Pacifico pilsner. Don’t judge: it was Friday night and I was thirsty.

The soft serve ice cream machine was out of order, which was a shame as that meant no pudding to review. I’ll let you know how good it is next time I go.


And there will be a next time, because despite not oohing and aahing quite as much as I expected, I'll be back. Lots of times. Despite ordering almost the entire taco menu and a couple of other bits besides, we ran up a bill for just a touch over thirty quid each. This is great value and a fantastic addition to the Durham and North Eastern restaurant scene. In summer, the views up to the Cathedral from the outside tables will be a joy. The food is already very good. I’m willing to bet that, in time, more of it will be as good as the highlights.


Some time ago I listened to Shaun Hurrell on a podcast discussing how to avoid letting great be the enemy of good. In other words: how can you make sure that you serve food that will make everyone happy, rather than blow some people away at the expense of others? In scaling up from a shipping container to fully fledged restaurant, with dozens of tacos now flying out of the kitchen in an almost constant barrage, I think Hurrell and his team have succeeded admirably at hitting the ground running. I can’t wait to see where they raise the bar to in due course - especially when they launch the fancier chef’s table offering that they're planning for the downstairs space. Now that'll be a meal worth looking forward to.