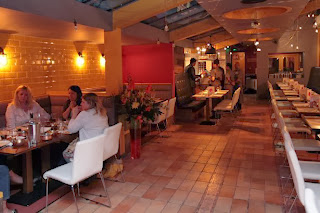 
It’s incredibly hard to find. On the website, rather than the posh-sounding “1 Brentwood Mews,” they really ought to say: “it’s in the back lane behind Avanti in Brentwood Avenue”. It looks like a shack beside the railway tracks.

Which, of course, is exactly the point. It looks as authentic as the old Moti Mahal in Old Delhi, home of the butter chicken. A red, corrugated sheet of metal separating it from the Metro line, a load of tables outside, freezing in the October night (it’s only open in the evenings) and inside, a half finished interior – or so it appears.

Bright red and yellow walls, and a ceiling draped with lights that look as though the electrician is off on an extended lunch break until the ceiling tiles arrive. I love it.
It has an informal ambience, with nice Indian music and friendly, if slightly inexperienced, staff.

There was also an enthusiastic owner, delighted to introduce me to his new establishment.

Street food, please, I said. He didn’t need to know that I know India like the back of my right hand.

And so he brought me some Bombay bombs. 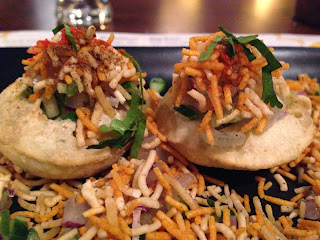 Wow. They are really good. Though the picture above makes them look enormous, in fact they are tiny little puri, stuff with potato and tamarind chutney, sprinkled with sev – the little crisp noodles made with gram flour and water and pushed through the sevanzhi mill. They reminded me of the little tamarind and potato puri, dripping with yoghurt, I've enjoyed in the Taj Mahal hotel in Bombay.  Before it was renamed Mumbai.

These were fabulous. As were the lamb chops (adraki champeen), marinated in ginger and paprika, cooked beautifully rare. 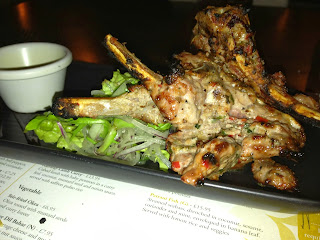 The food was presented well on modern black plates, and there is certainly an enthusiasm and ambition exuding from the kitchen, even though they don’t get everything right.

Chicken chilli fry is exactly how it sounds, and no more Indian Street than Grey Street. They don’t use ghee for health reasons, which is a shame, because ghee is neither bad for you (as it’s clarified butter, with none of the dodgy ingredients of "Pure Vegetable Oil") nor does anything quite replace it on the flavour scale.

I ordered something called dal pakoda chaat, which was supposed to be lentil balls in chutney, but instead some potato and curry leaf pancakes arrived with a coconut chutney. I recognized them immediately as little dosa, except that they lacked sourness, which should have come from an overnight fermentation, and arrived with thick batter and without sambar – no one eats dosa without a bowl of sambar, on or off the street.

Eventually the kitchen sent out the lentil balls I’d ordered, smothered in a completely inappropriate spicy sauce. It was like eating dry falafels with tomato ketchup.

But other dishes were good. I tried and enjoyed one curry – a sweet and spicy chicken jhalfrezi, with a side of interesting sweet potato and cumin, which I ate with wafer thin roti.

I do recommend Dabbawal in Jesmond. It will get even better if it can focus a little, so I shall return.

As to the other Dabbawal branch in the centre of Newcastle branch – I think the owner needs to put a nice Bombay Bomb under it, at least at lunchtimes. See my review here.