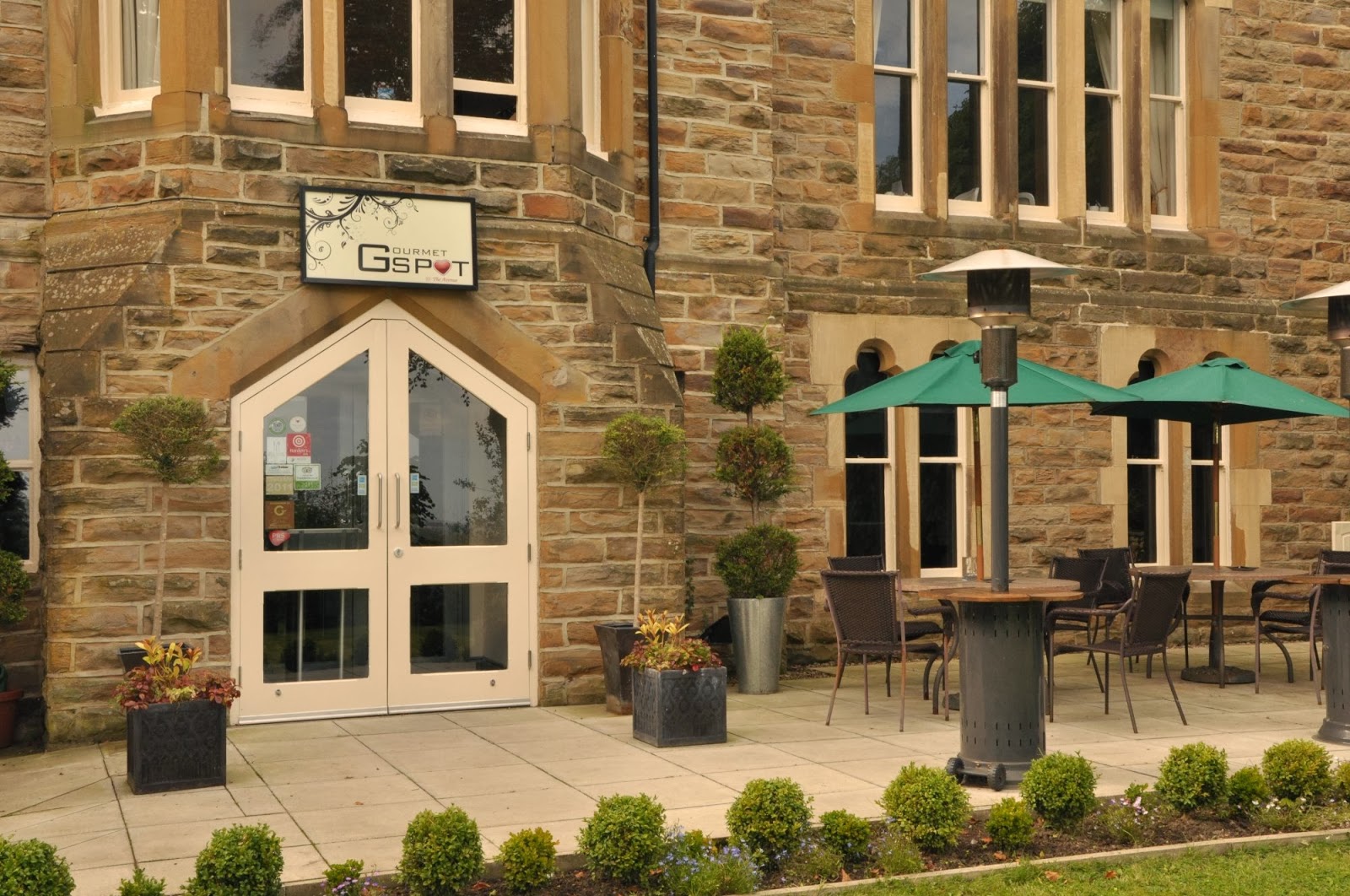 
[I'm pleased to report that the Chef at Gourmet Spot, Stephen Hardy, is now the owner of the business and has rebranded it as DH1.  Same team, phone number and address, similarly good food, but it now has cloths on the tables, so ambience is bound to have improved.  Still highly recommended]

I’m guessing the owner of Gourmet Spot must have been a gynaecologist, because on the restaurant’s website the G and the word SPOT are highlighted.  It was also extremely hard to find.

If you're visiting for the first time, you should really trust your satnav. Mine had safely brought me to within a few hundred yards of the destination when the voice confidently ordered me to turn right onto a dark residential street, with no sign of life or restaurant.

It can’t possibly be up here, I thought, and so I steered on for the bright lights further along the main road. Ten minutes later, after a tour of the back streets of Durham, the exasperated computer brought us back to the other end of the same dark street.

‘You have arrived,’ it said with a sigh, and I could swear I heard it muttering ‘Told you so!’ under its breath.

But there was still no sign or illumination. Instead, a torch from the glovebox revealed ‘Farnley Tower’, an unlit sign outside a mid-Victorian gothic villa. It was a small hotel.

We stumbled up the dark path to seek directions to Gourmet Spot. Inside, the hotel’s reception could have been mistaken for Fawlty Towers. It was painted in multiple but clashing shades of light blue and pink, with a maroon swirly carpet.

It’s a B&B with four stars, so I guess the rooms must be nicer. It also has this extraordinarily named restaurant in its basement. When we eventually reached it, what a surprise!

Imagine an episode of Fawlty Towers in which Sybil goes away for the weekend leaving Basil with a paintbrush and instructions to give the restaurant a new coat of magnolia. Except that one of the guests is Peter Stringfellow, who hates magnolia and offers to make over the restaurant for him, so Sybil arrives back to find it turned into a black and red bordello, with an incongruous giant glittery crystal chandelier dangling from the ceiling. 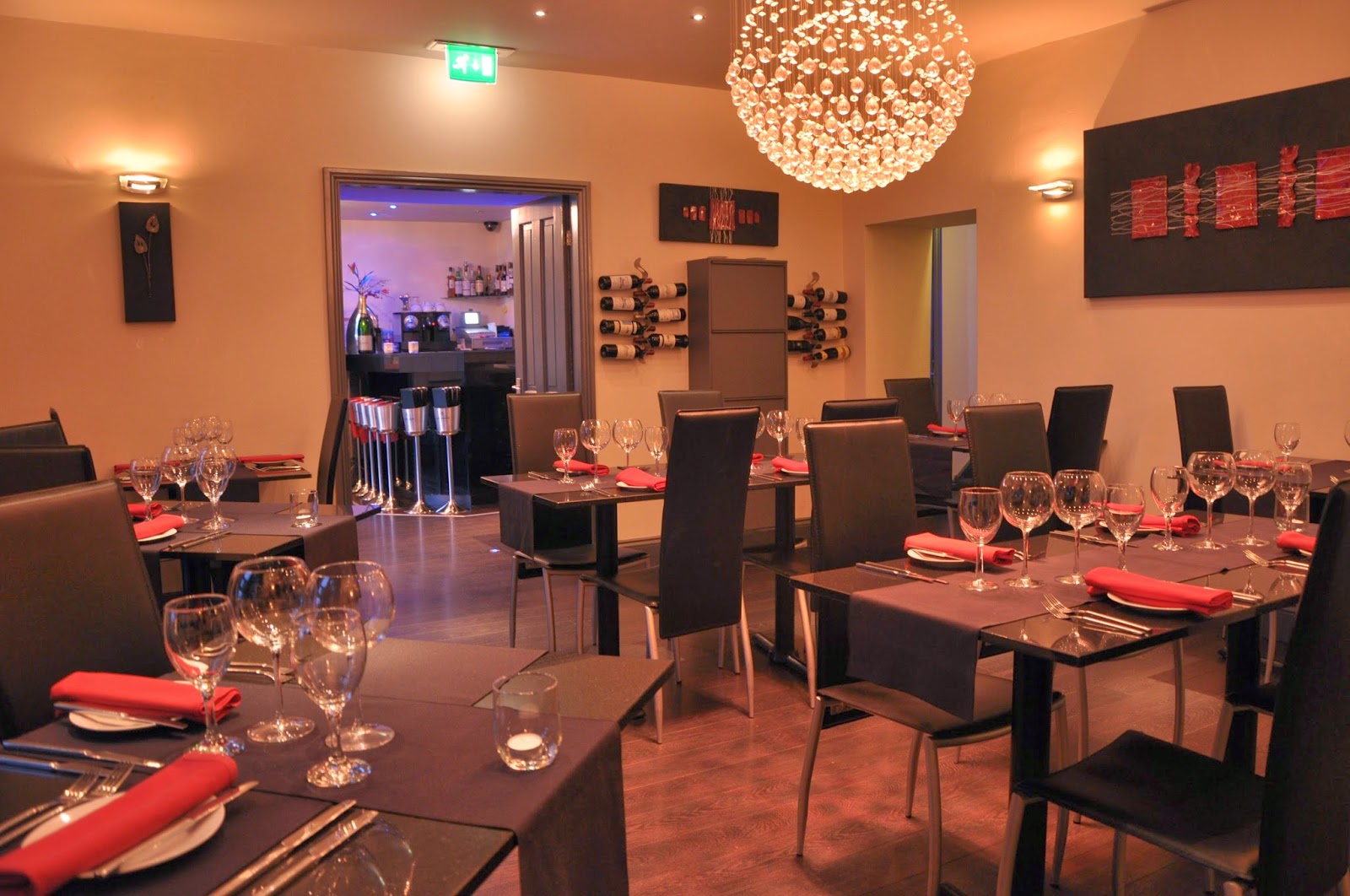 That’s what we found when we descended into the G Spot. It is tiny, with black granite tables, red napkins and absolutely no atmosphere at all.

None of this augured well for a decent meal, so we anticipated the worst. How wrong we were.

The chef is called Stephen Hardy. A student of the “creative” school of modern British cooking, his menu is ambitious and complex. He has a 7-course tasting menu for just £55. We couldn’t resist.

As the menu had three fish dishes, followed by pork and then venison, we ordered a bottle of Riesling from Reichsrat von Buhl in Pfalz, a knockout dry white from a sophisticated and interesting list.

Our amuse-gueules included beetroot meringues and fried cod skin, and our first course was a deep fried Lindisfarne oyster. Sounds familiar? Yes, I recently found all these items at the outstanding Raby Hunt in Darlington.

But Hardy has taken them (if indeed it was that way around) and made them his own. The beetroot meringues sandwiched a creamy goats cheese, the little cod skins, thinner but not as crispy, had a dribble of parsley purée rather than aioli, and the oyster came with apple and shallot.

It wasn’t as polished or pretty as James Close’s cooking – the batter on the oyster was more fish and chips than tempura, and the apple didn’t compare with the Raby Hunt’s concentrated oyster emulsion and oyster leaf. But it was a surprising, ambitious and interesting menu.

I enjoyed it a lot, the service was immaculate (the chef’s wife Helen was running the front of house) and certain dishes stood out. Like the salmon, cured and cooked, which brought an intricate and subtle combination of flavours, including horseradish and fennel, dill, and a delicious grilled fillet of cucumber.

Next came the freshest hake with brown shrimp and florets of grilled cauliflower, with a salty dusting of dessicated seaweed, followed by little cubes of pork belly, with crispy white crackling, which arrived with mounds of mustard seeds, red cabbage and apple.

The star turn was some venison, slow cooked but rare and tender, with Harrogate Blue cheese and celeriac purée and some delicious beetroots baked in salt. These little beauties were almost worth the trip to Durham on their own.

I assumed the pastry chef had been working overtime: there were variations of rhubarb, with ginger ice cream and a terrific pistachio crunchie, followed by no-more-or-I’ll-burst-ish aerated chocolate and salted caramel.

Except that there is no pastry chef, and no extended brigade sweating over the details. According to Hardy’s friendly wife the whole meal, from the little loaves of bread to the petit fours, had been prepared by just two people.

Which is why the place doesn’t open when chef Hardy isn’t in the kitchen. And why you really should book as soon as you can.