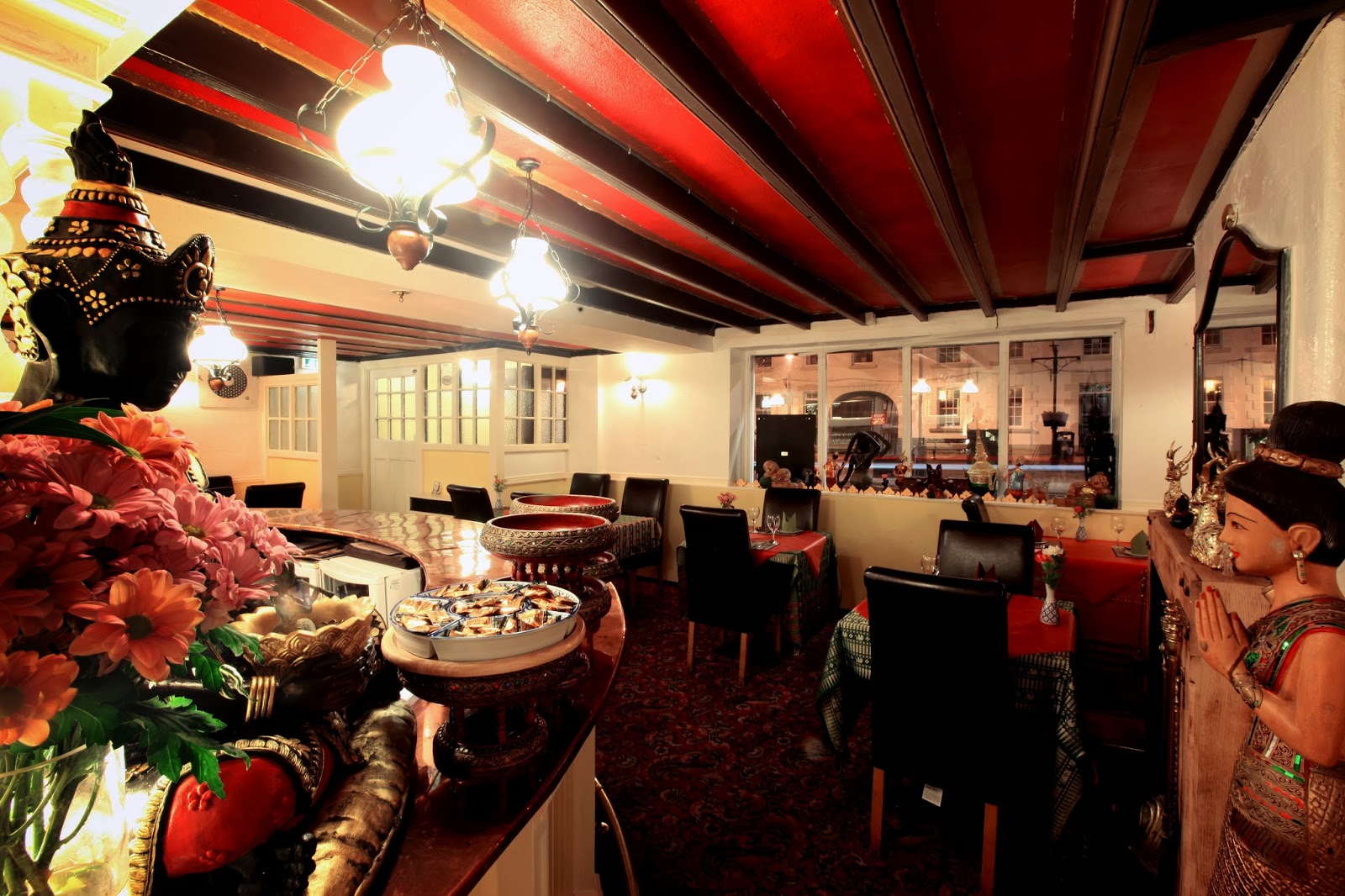 Two things greet you when you walk into this place: the wai and the bar. 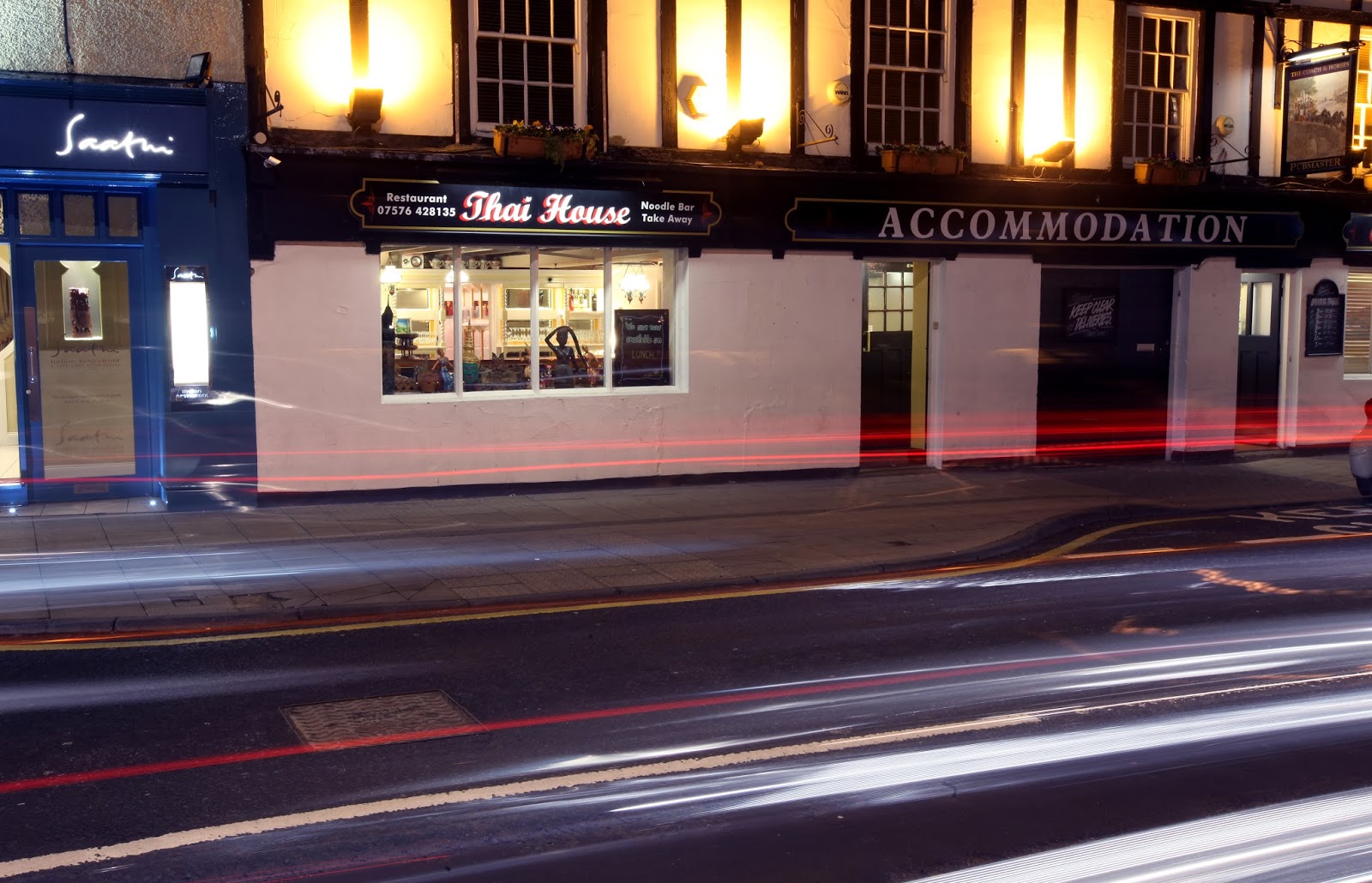 The wai, the traditional Thai welcome, palms pressed together in respect and reverence, was given by a smiling waitress. She was dwarfed by the huge bar, a semi-circular affair that dominates the room, reminding us that this restaurant is merely a lodger in a Hexham pub called the Coach and Horses.


Surrounded by traditional swirly pub carpet, it guards the rows of glass shelves formerly laden with bottles. Now these shelves are bare apart from three lonely bottles of wine: one red, one white, one rosé.

There’s a large menu: numbered from 0 to 82. Which is more than can be said for the wine list. What you see is what you get: just red, white or rosé. The white was so acidic it made you wince. But they served it in large glasses filled to the brim, which makes it just about the cheapest (if the nastiest) house wine in Northumberland. The rosé was a little more drinkable and just as generous. But it’s ironic that the restaurant with the largest bar has the smallest winelist.

There were several beers instead. We had a bit of an international communications problem when we tried to get fizzy water. It turns out the waitress had only been in the country for 3 weeks. Her lack of vocabulary added to the authenticity of the place, which was also helped by the decor.

The menu looked rather promising too, and the prawn crackers they brought with the wine really did taste of prawn, which is rare. I tried using the names on the menu to order, but the waitress only understood numbers, so, like a lucky dip in the lottery, we picked 5, 6, 9, 20, 25, 63 and 73.

These turned into starters of deep fried king prawns, ribs with garlic, beef in honey, and mains of duck with tamarind sauce, chicken green curry, steamed fish with ginger. Oh, and a seafood salad to make us feel healthy.

The food was beautifully presented, with main courses sailing around the table on boat-shaped dishes and the usual prettily turned vegetable garnishes, as only Thai chefs know how. 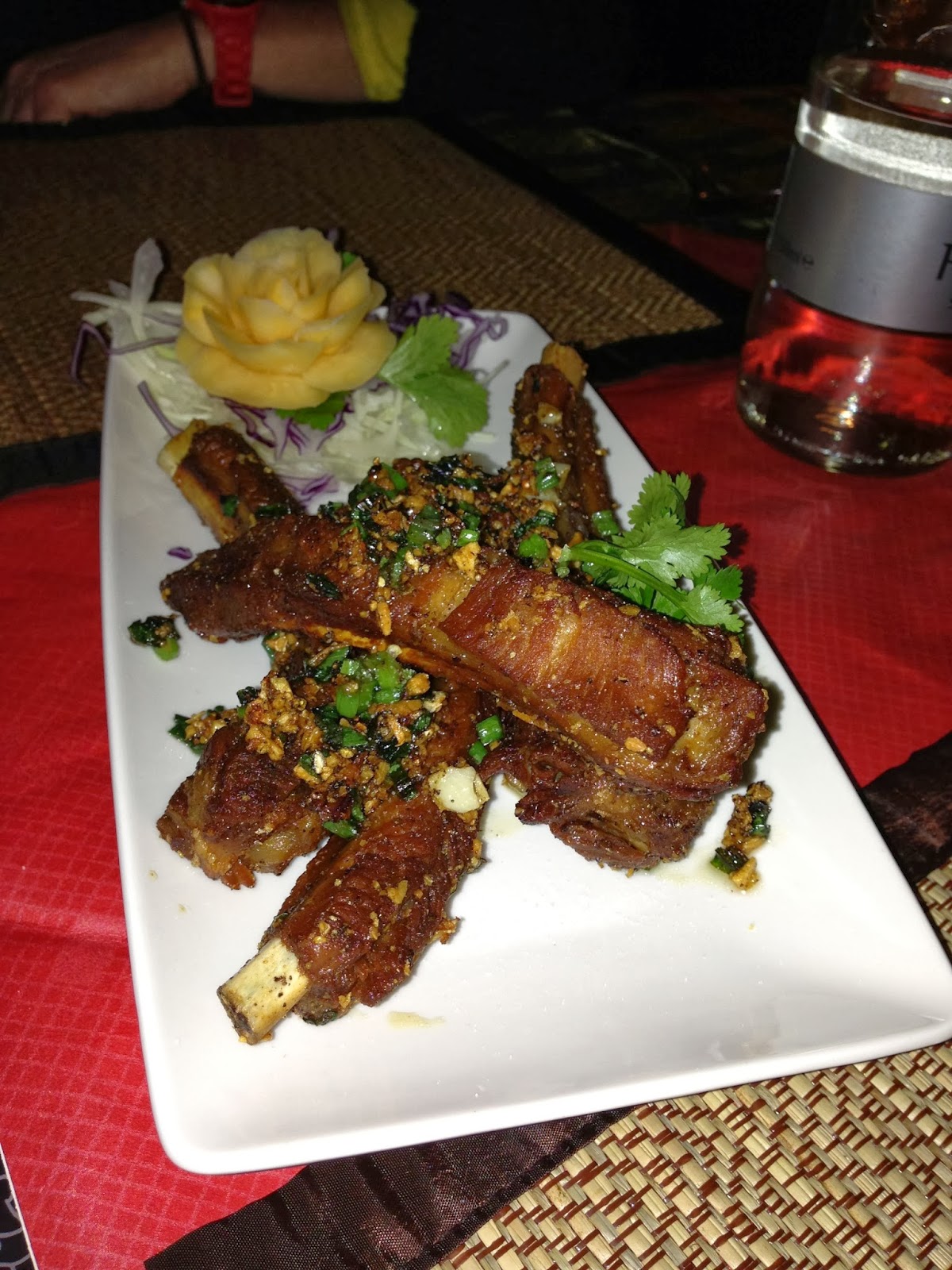 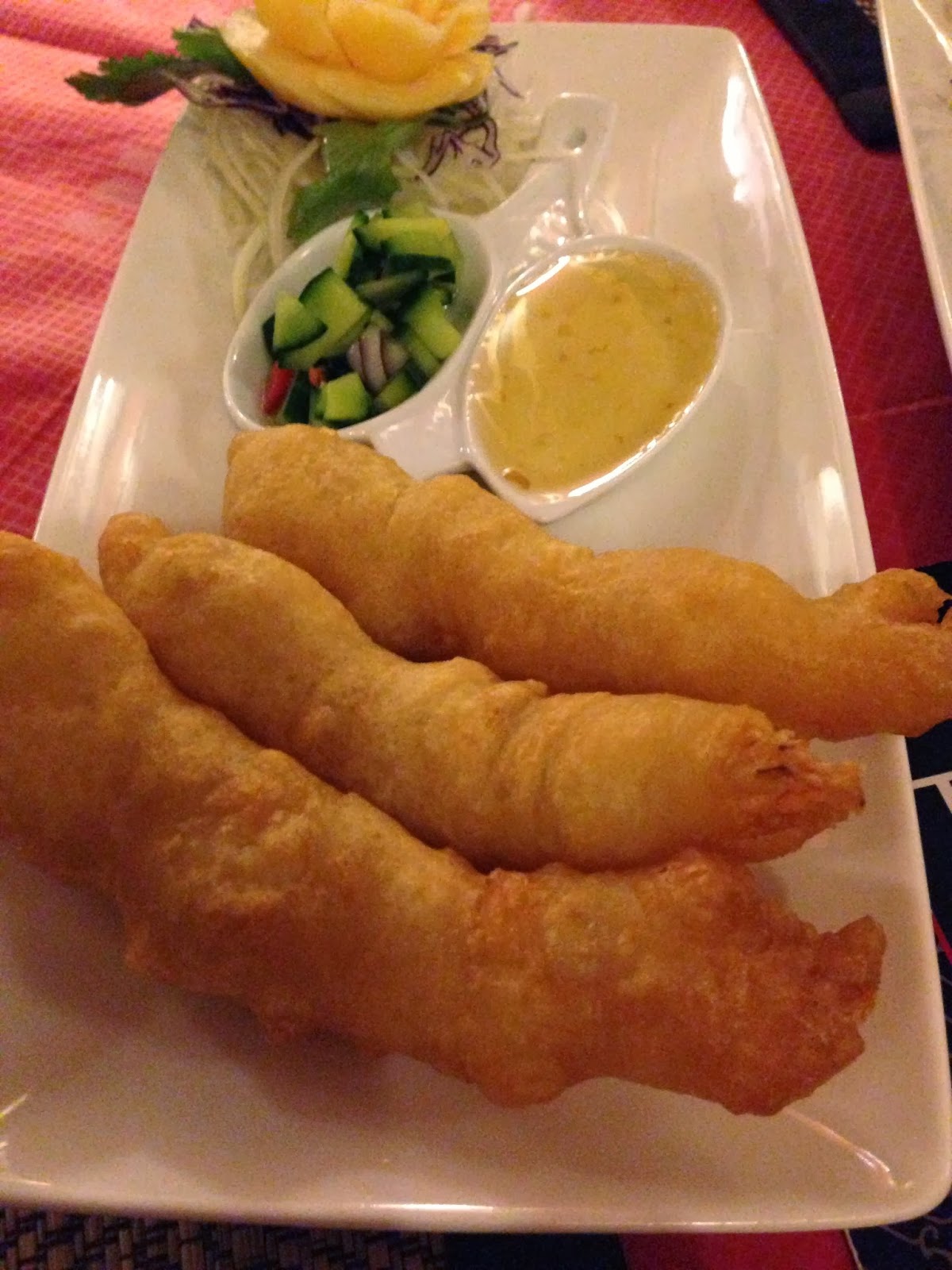 The ribs were deliciously peppery, but the batter on the prawns was thick and chewy and the honeyed beef was tough. I wondered if the meat had been defrosted. I’m always suspicious of small restaurants with big menus. Nowhere with a low turnover of customers (this has just 30 covers) can afford to keep a range of fresh meat and fish on standby, so the freezer and the microwave sometimes take over. 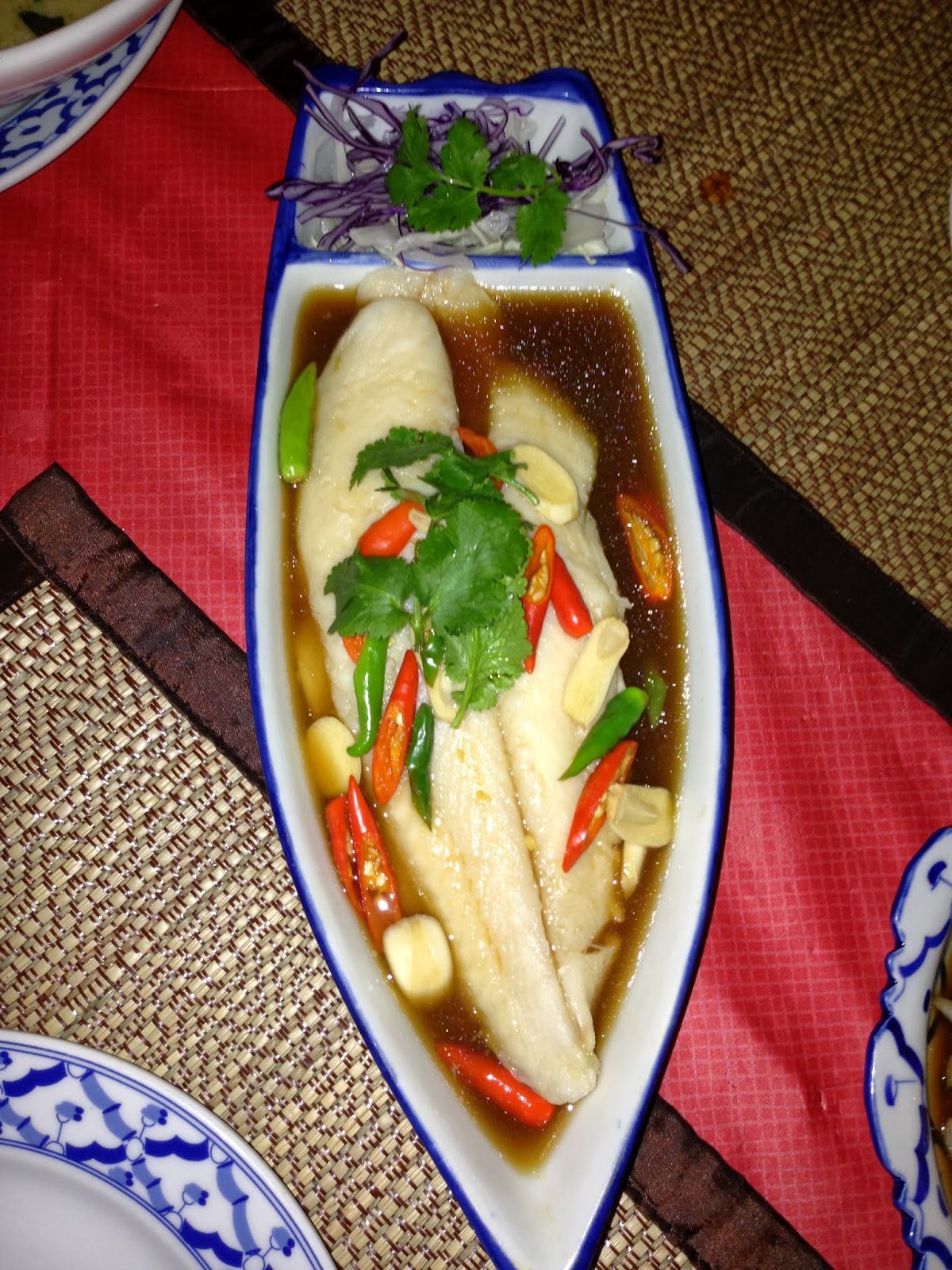 I suspected it even more when the steamed fish arrived. Ours clearly hadn’t seen the sea in quite a while and had that rather woolly, watery texture you get when you put fish in a freezer and then defrost it in water quickly. I’m not saying it was, just that it tasted like it. 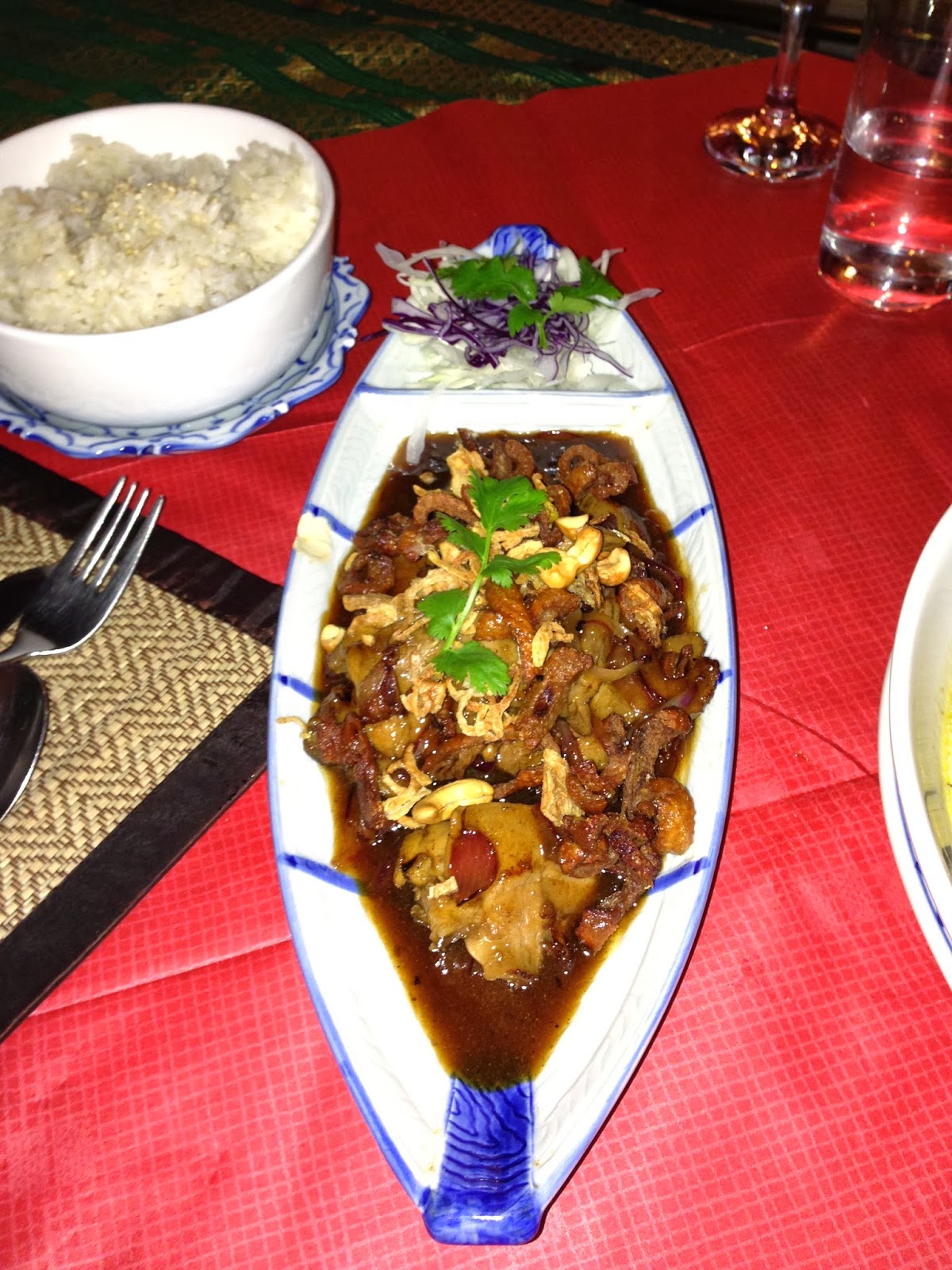 That could also explain the chewiness of the duck. It’s a shame, because some of the sauces were really quite good and displayed expertise in authentic Thai cooking (though nothing was as spicy as it might have been).

I particularly liked the tamarind that came with the duck and the fish’s ginger sauce laced with lime and coriander. The green curry was disappointing – it was far too watery and lacked many traditional ingredients.

What this place needs most is a little investment to get rid of the bar and add more tables. Then it needs some more customers so the food can always be fresh. I suspect this may be difficult for the owners.

But they do have a lot going for it: friendly staff, good cooking skills, and a large population of foodies in the Tyne Valley that would really appreciate quality Asian food if it were offered.