I was sure I was going to hate this place. For a start, there’s the name.

For me, Harry’s Bar means Ernest Hemingway, carpaccio and Bellinis. One of the world’s great names, founded in 1931 by Giuseppe Cipriani, it was Venice’s ultimate celebrity haunt. They invented the Bellini – simple white peaches and Prosecco, and then in 1950 they created beef carpaccio.

There have been many copycat Harrys over the years, including the private club in London where they serve North Italian food but make gentlemen wear a dark suit and tie, which rules out membership for this Secret Diner. 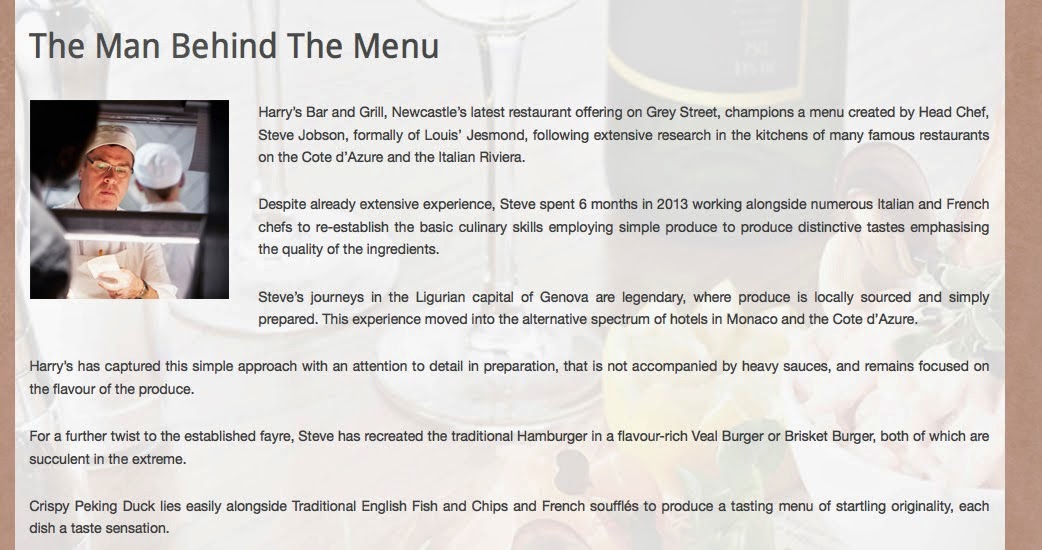 This site also boasts of the chef’s “extensive research in the kitchens of many famous restaurants on the Cote d’Azure [sic]…” and includes the immortal line “Crispy Peking Duck lies alongside Traditional English Fish and Chips and French soufflés to produce a tasting menu of startling originality”. I don’t know who wrote this stuff, but they couldn’t have done a better job of portraying it as a temple of cheesiness, ignorance and bad taste.

It also claims that it is the “home of the Rossini”, the strawberry cousin of the Bellini that has been offered in every decent cocktail bar in the world for decades. Earlier this year, Harry's Bar tried to get a 4am drinks licence, creating such a nightmarish vision of Bigg Market inebriates migrating to stately Grey Street that the council was forced to say no. But it still has a capacity of 1,000 late night Rossini drinkers. That’s an awful lot of strawberries.

So I thought this the least likely place to find decent food. Except that the chef whose “journey in the Ligurian of Genoa are legendary [sic and siccer]” is actually Steve Jobson, formerly of Louis.

A couple of years ago I gave that restaurant four stars, so I wanted to find out why Steve had gone to Italy “to re-establish the basic culinary skills employing simple produce to produce distinctive tastes” (whatever that means). I took Mrs Diner and a friend to investigate.

What we discovered took us by surprise. Inside, it’s not remotely naff. It’s a modern, elegant brasserie. Sure, there are two enormous bars, built to accommodate a horde, many of whom are unlikely to have heard of the Côte d’Azur, but there are also comfortable dining areas with tables widely spaced. And the staff are charming, well-informed, professional people who are clearly proud of their new place and its kitchen.

As Mrs Diner was running late, my friend and I ordered a couple of glasses of crisp house Colombard-Ugni together with some foie gras and a haggis scotch egg. 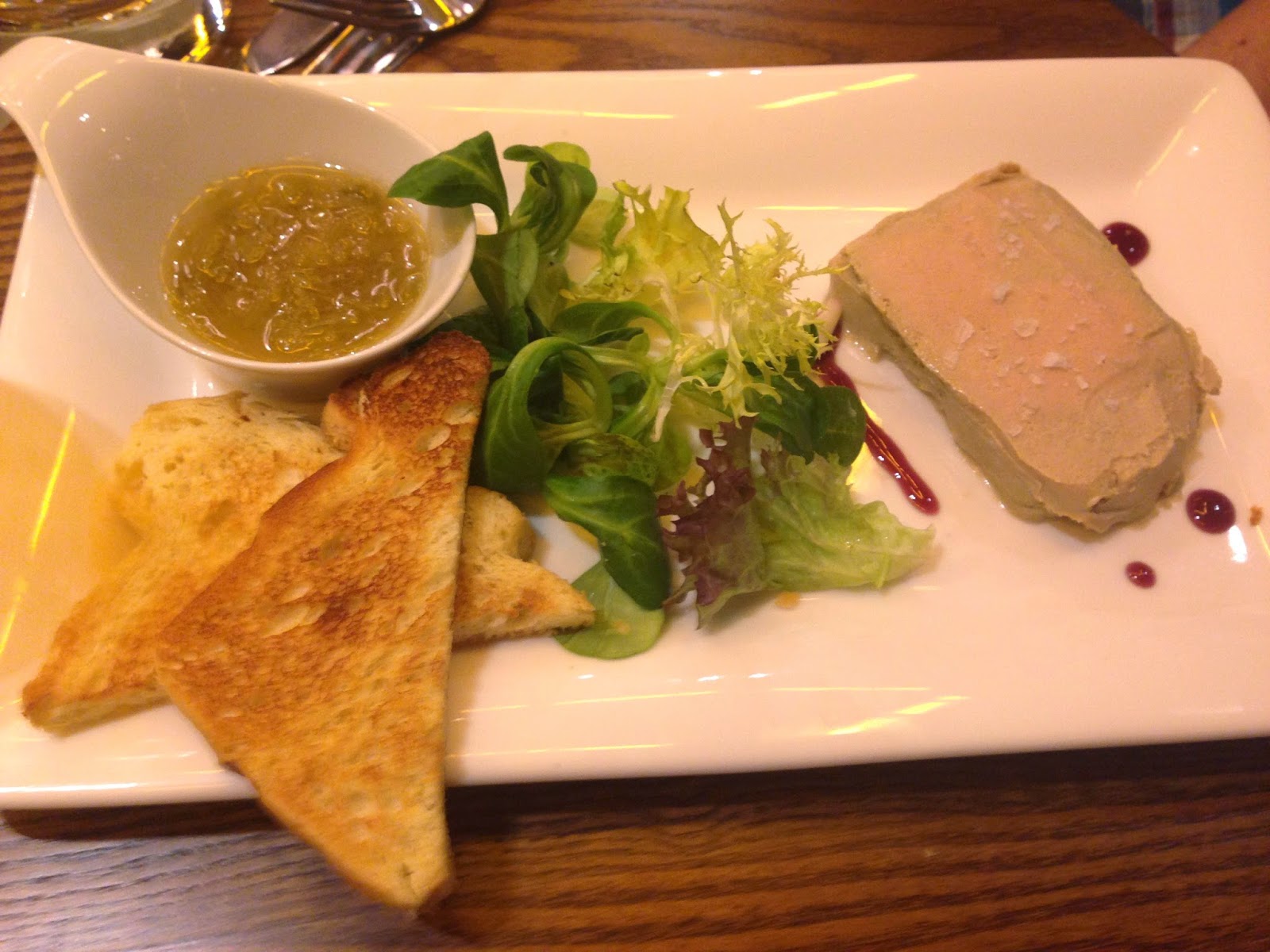 The foie gras was modestly called pâté (actually, the menu said pate, but who cares about an accent), but this was an outstandingly smooth, cream-laden pink parfait, laced with Madeira, served with fine brioche and spiced rhubarb compote. The scotch egg was nearly as delicious, though squashed into a meatloaf shape. If we’d halted the meal there, I might have signed off four stars, so it was rather a shame that when Mrs Diner joined us, we recklessly ordered Harry’s Original Spare Ribs (with “Harry’s extra special unique recipe”) and King Prawns with Provencal Sauce.

It might as well have been called Provincial Sauce – it was so bland and removed from the South of France; the prawns appeared to have been sprayed with some sort of mesquite smoke – they were watery and insipid, but their shells were hard and smoke-slimy. 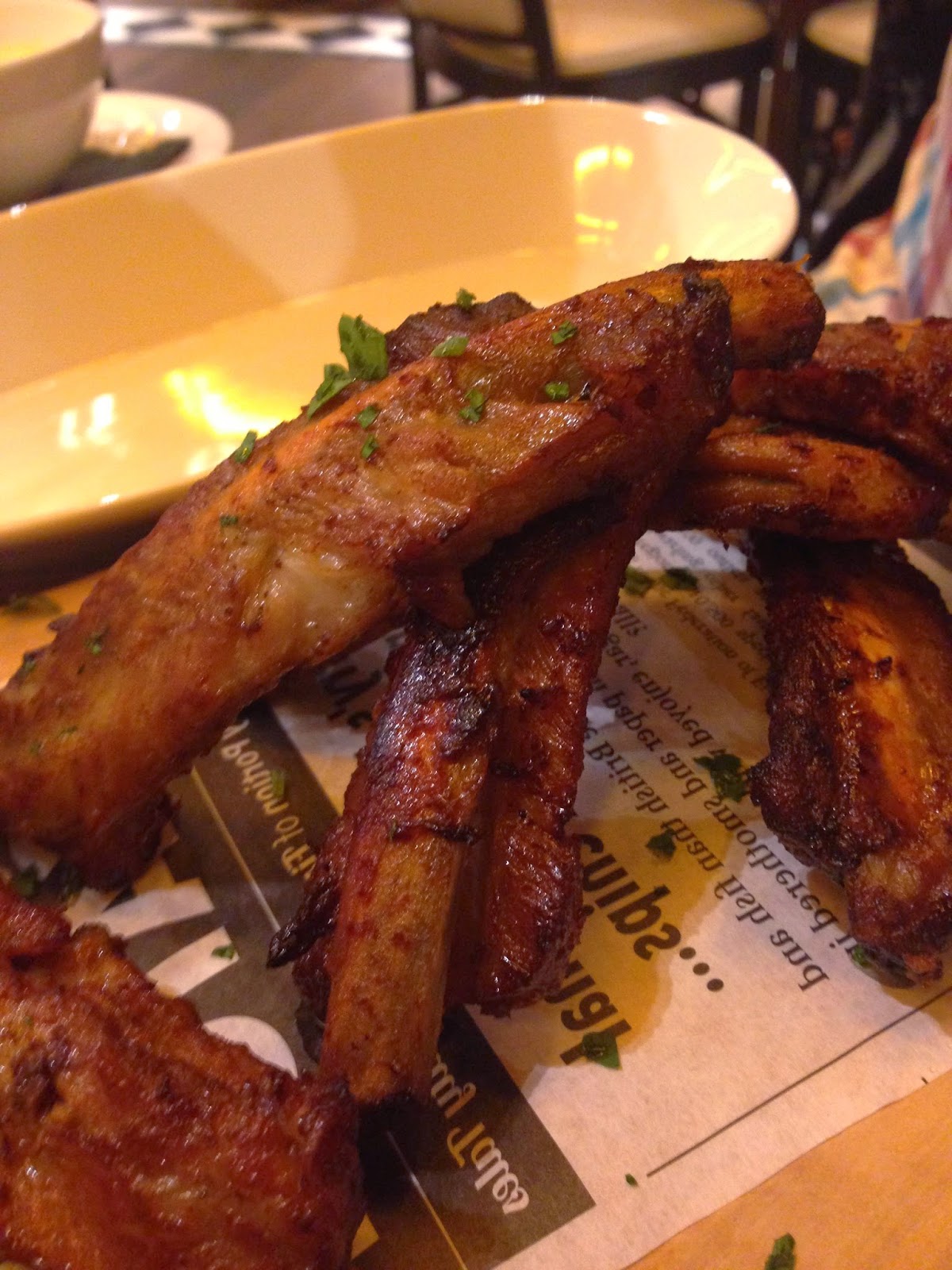 The spare ribs were almost entirely unseasoned. The chef needs to throw away Harry’s extra special unique recipe and take a trip to Lane7 to see how ribs should be cooked. This was a meal of contrasts. We spotted farmer Tim Oliver’s lamb on the menu, then correctly guessed that he also supplied his famous Belted Galloway beef for the steaks. 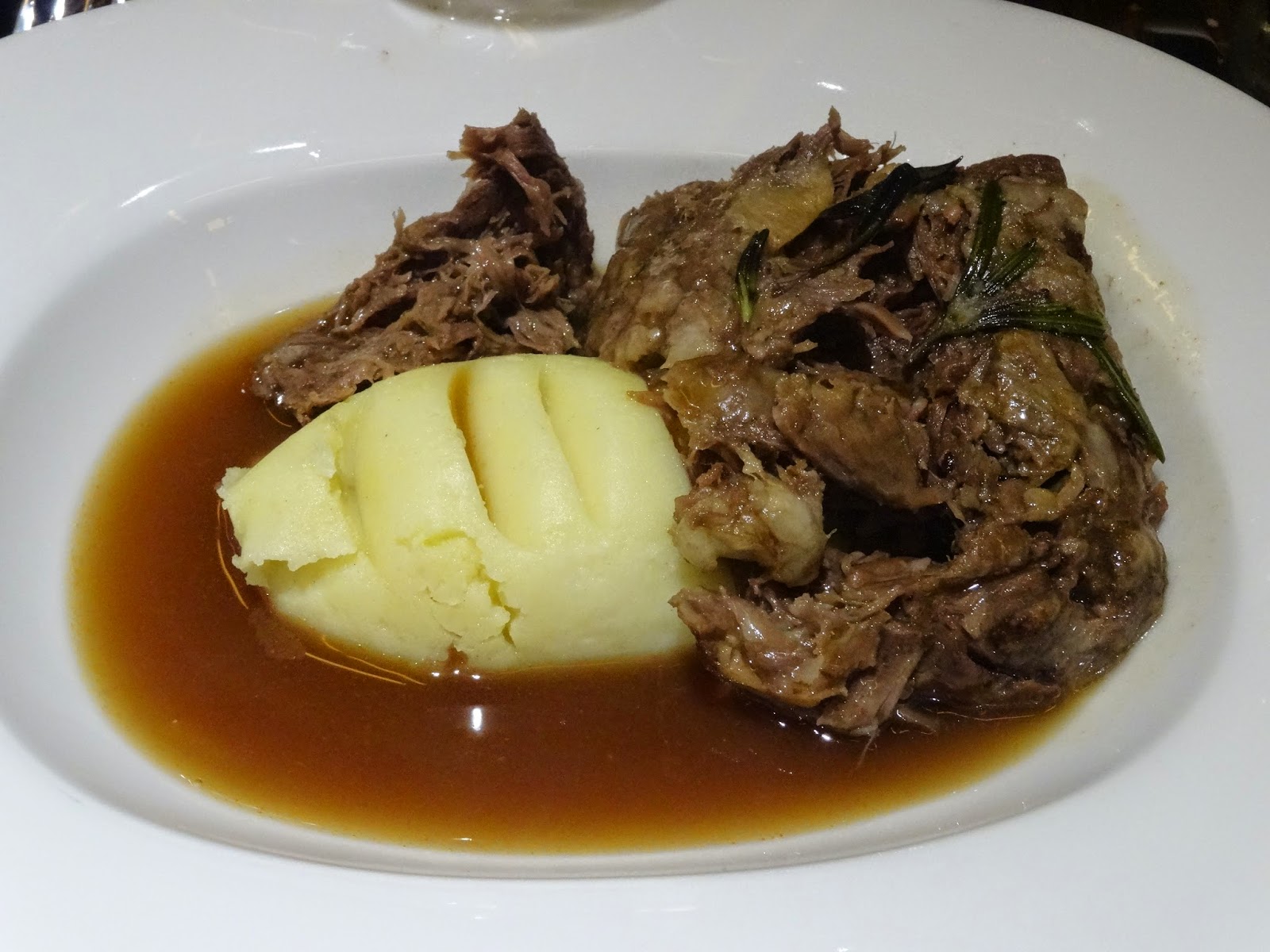 So we ordered a fillet steak, which was typically tender and chargrilled to perfection while Mrs Diner had lamb encased in clay, which the waiter broke open at the table. It had an excellent smoky garlicky taste with rosemary and a good lamb jus. 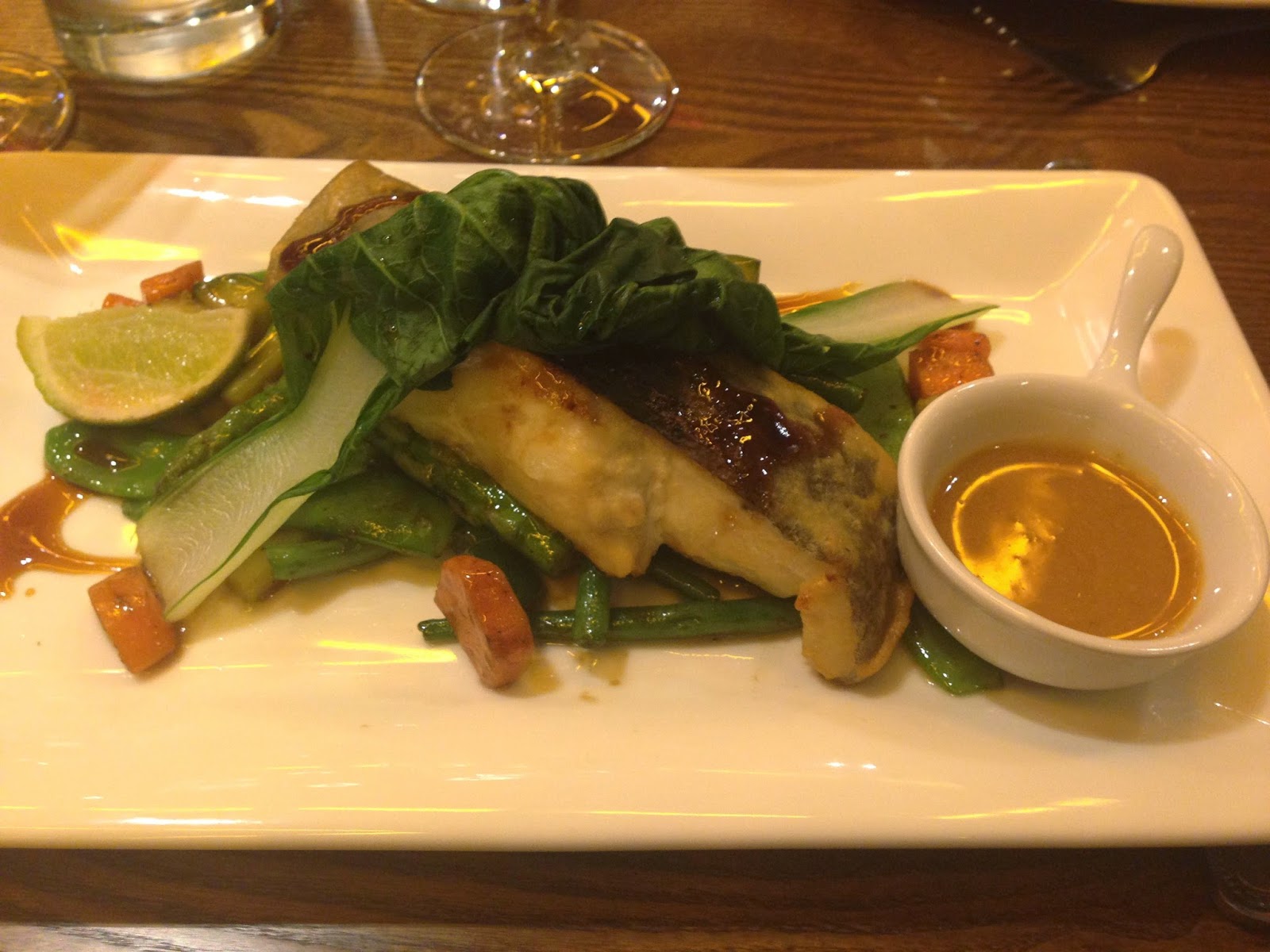 I never found out. There was no perceptible blackening at all – the miso was repellent, and the yuzu sauce adding nothing fruity to the mix. Sides included "chunky dripping-fried chips," which were pathetically anaemic, and piselli (peas with white onions and pancetta), which was authentic and delicious. 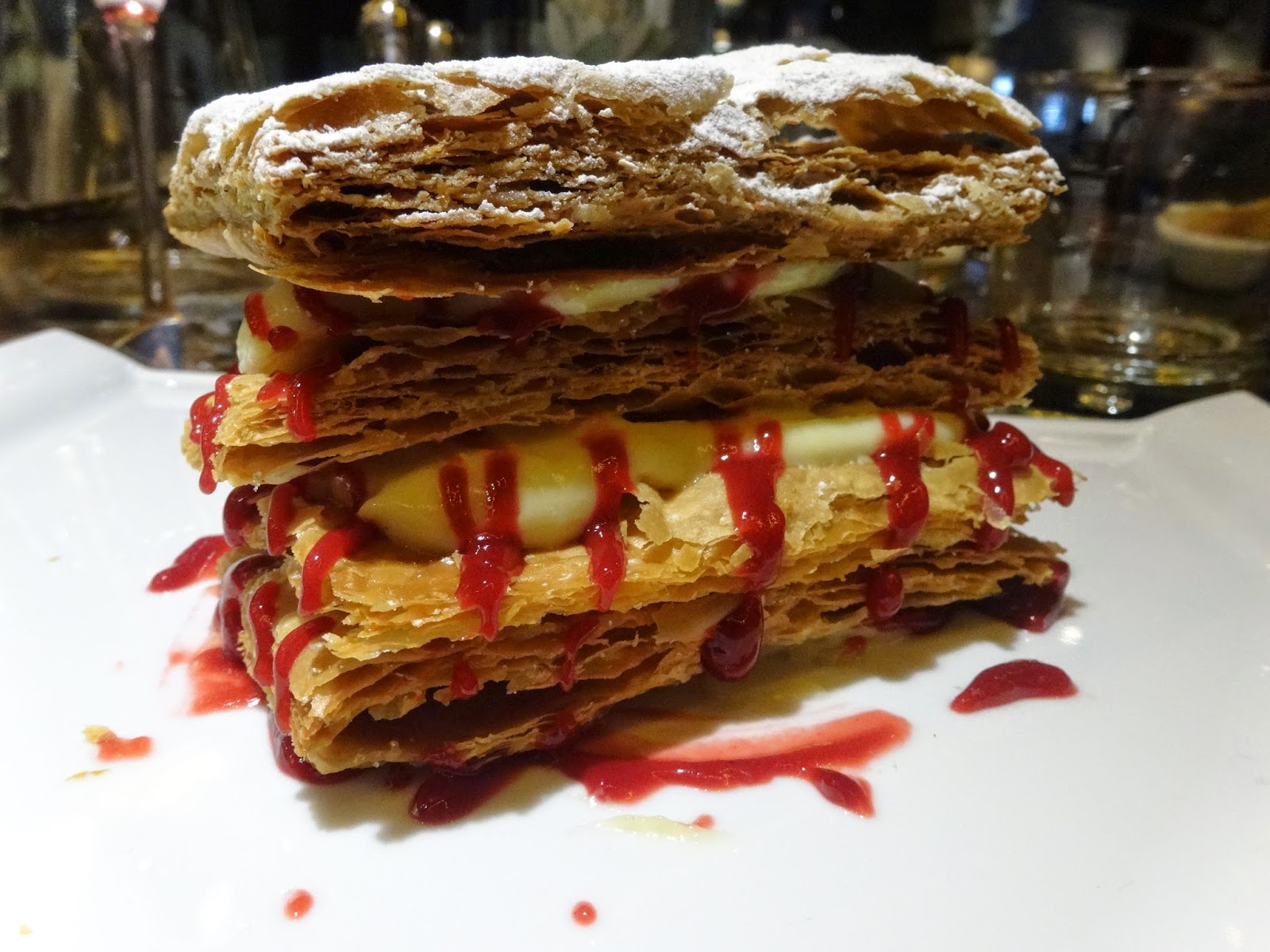 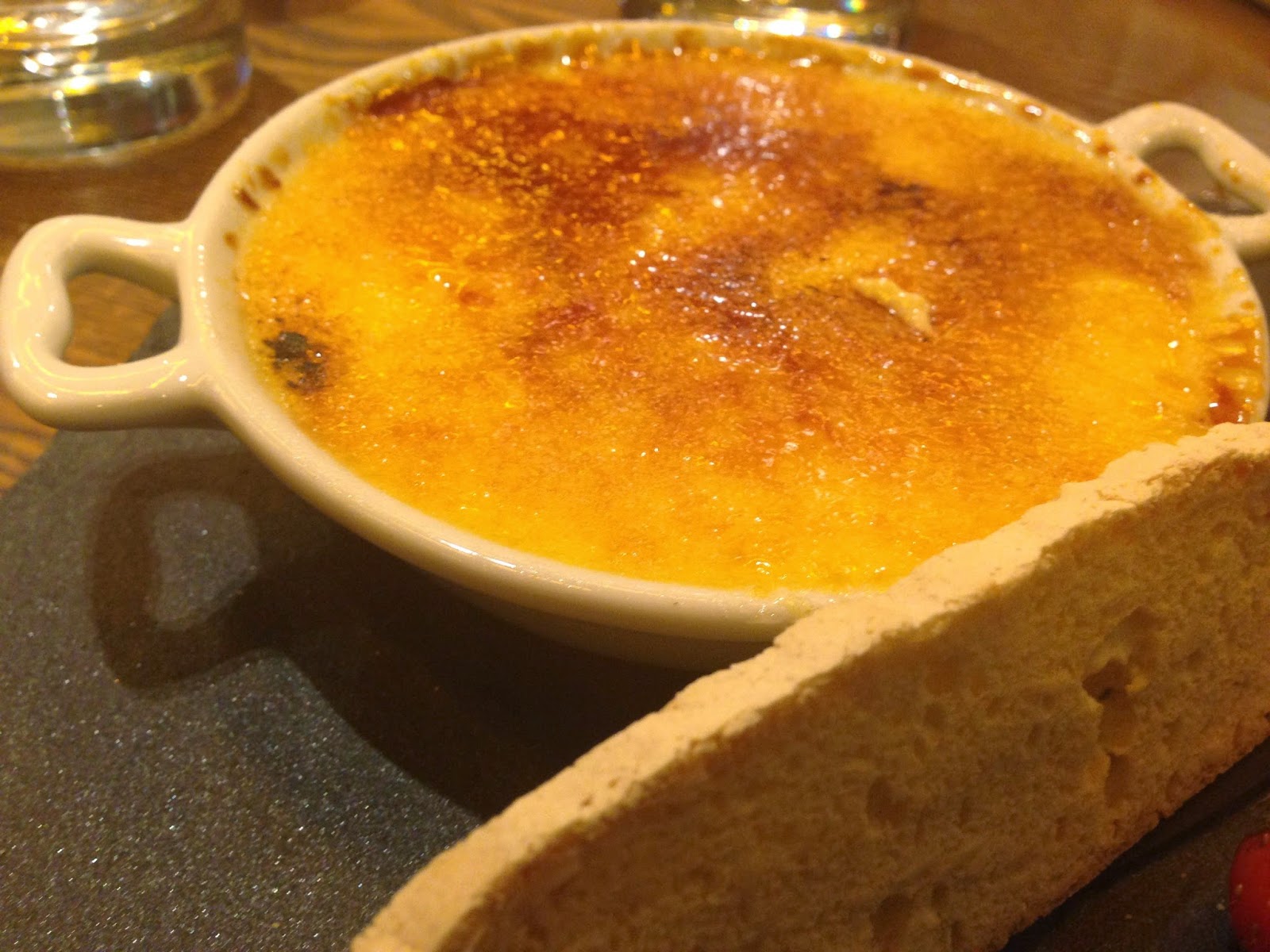 Desserts were fine: a classic strawberry mille feuille and a typical, well executed crème brûlée (not “flaming” as the menu eccentrically promised).

Overall, this meal was hard to judge. Some dishes were excellent – foie gras, steak, lamb; others fine, like the desserts; but several were quite poor – prawns, ribs and fish.

So three stars, then. Which is pretty good for Grey Street.