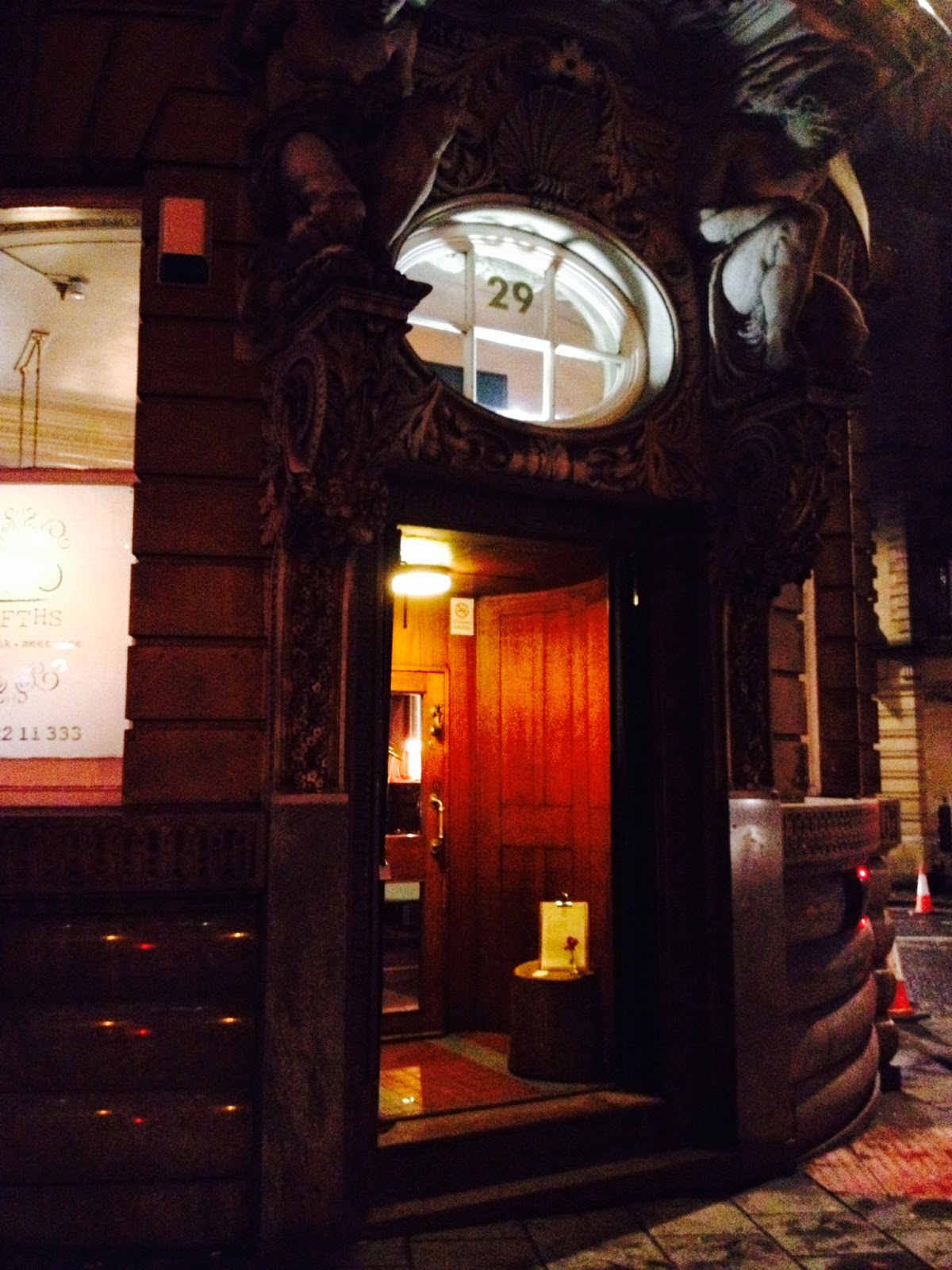 This restaurant has a great location. It directly overlooks Central Station at the top of Newcastle’s self-styled “Diamond Strip” – the stretch of high-heel-clicking pavement that links the bars down Collingwood Street. If that doesn’t quite place it for readers over the age of 35, Two Fifths sits directly opposite the Lit & Phil.

This building used to house a hairdressing salon called Saints, and the hairdresser himself, a genial host called John Snell, has turned it into a laid-back restaurant and bar. It’s certainly a beautiful room, formerly a bank with a high, embossed ceiling and ornate features. They’ve turned the bank’s vault into a private dining room.

A creative man who would rather run a restaurant than spend the rest of his life chopping hair, Snell has furnished the place with a quirky mix of props, including a dentist’s chair and lights from a hospital operating theatre. The tables are printed with North East images designed by a grateful client.

It’s fun and funky, though it appears to have been refurbished on the cheap, with an unfinished feel about the décor, which is rather unusual (refreshing, even) for this street of bland, veneered venues. There’s nothing wrong with the odd rough edge in a restaurant, if the food works. Sadly this food doesn’t.

I guess the cocktails are good: a friendly and knowledgeable manager called Carl told us that the barman makes his own Vermouth, and that everyone was excited that the elderflower season had begun because they would make their own cordial. The house whites included an excellent Albariño.

Why is it named Two Fifths? I found a clue on the restaurant’s Facebook page, which says that the food is “a celebration of the plurality of British citizenship”. According to the owner, two-fifths of the British population originate from countries outside Britain, especially the Commonwealth, so his food reflects this. There are old school maps of Asia and Australia on the wall.

I don’t know where he got this dubious statistic. Surely 95% of us have overseas ancestors – most of us are filled to the brim with Scandinavian or French blood. It seems like a half-baked, or, in this case, two-fifths baked idea.

The result is a confusing jumble of a menu. There are just ten items, divided into “small” and “large”, which we guessed meant starters and mains. In fact all the dishes we tried were modest, roughly presented in bowls, and the ‘small' comprised Irish stew (or “stobach-inspired mutton and gammon broth”), followed by Jersey crab cakes, then something called Kruger Boboche and finally Copper Gong Bay (Hong Kong, right?) sweet and sour chicken wings.

The larger dishes were Polynesian pork stir-fry, “Burmese inspired” green chicken curry, Cypriot lentils with Lefkosian halloumi (presumably from the Turkish side of Nicosia), and, as if to suggest the menu had completely exhausted the writer’s knowledge of geography, North Scotland (=farmed) salmon, “North East style” battered cod, and “locally sourced” rump steak in a tarragon and mustard mushroom sauce.

This menu isn’t eclectic, it’s unfocussed. And so, unfortunately, is the cooking.

Mrs Diner and I selected some dishes at random. We tried the crab cakes, which were salty with overcooked asparagus, and “boboche” (not a word I’ve encountered in my previous experience of South African cooking).

This turned out to be nothing more than a simple beetroot and sweet potato salad – the beets had been forced and so tasted of little, but the rest of the dish was fine with fresh, crisp green beans and a good light beetroot dressing. 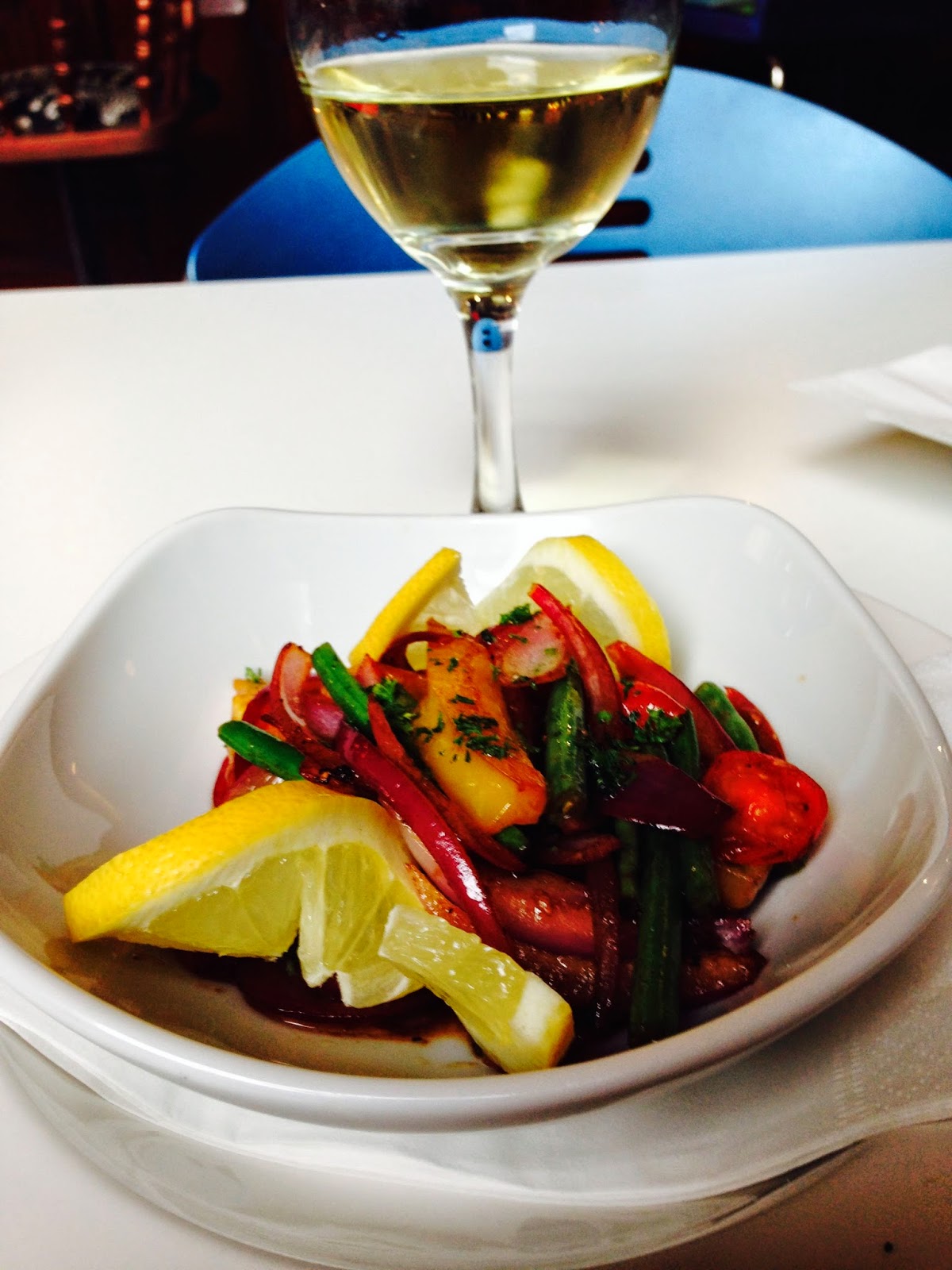 I also had, at the chef’s recommendation, a vegetable stir-fry. This was also pleasant – the sort of thing you find on stalls at Glastonbury. We then had Polynesian pork (£8.50) – an insipid dish with large pieces of pork, a few cashew nuts, and some vegetables rather resembling our stir-fry, and the lentil and halloumi dish (£9).

We later found out that the chef is Greek, but probably not Greek-Cypriot, for this warm concoction of cheese and lentils, peppers and cherry tomatoes, was dressed in an unbalanced, acidic sauce so unpleasant, neither of us could finish it.

I was anticipating so much better, because we were told that the chef came from the Terry Laybourne stable, and had worked at Caffè Vivo and Broad Chare. It’s a shame he wasn’t allowed to bring the recipe books with him. No chef could be expected to encompass such a wide range of cuisines, and this kitchen came nowhere close.

Of the five dishes we tried, two were fine, three were not. Two-fifths – how appropriate. So: two stars out of five.