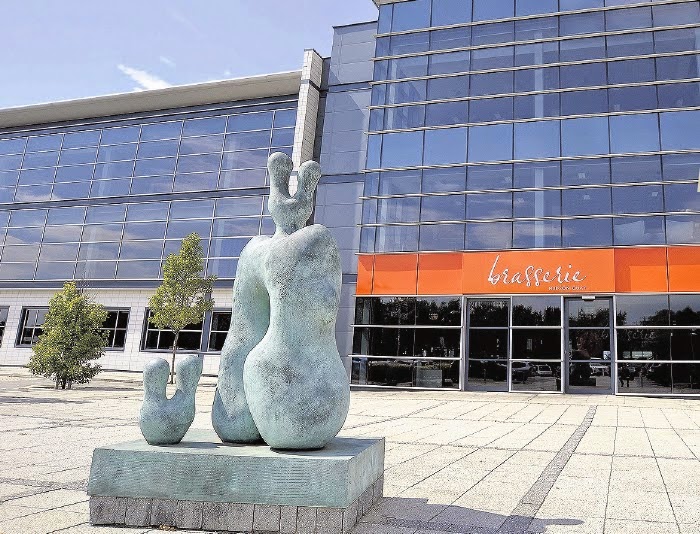 You don’t need to travel the continent to taste a slice of Europe – come to Middlesbrough. “Brasserie Hudson Quay”, according to its own publicity, “is a European style destination restaurant, designed to recall the Grand European Cafés of France, Spain and Italy”. Really?

OK, I may sticking my neck out, but, on the international culinary scale, I reckon the town of Middlesbrough is about level with Gdansk.

Actually, that’s doing a disservice to Gdansk, where a place called Brovarnia has excellent goose breast with caramelised beetroot. No, Middlesbrough is worse than Gdansk. You’d have to visit Bulgaria to find a major European town with a poorer selection of eateries.

I can’t count the number of times I’ve been forced to endure one of Middlesbrough’s old-fashioned Italian joints with droopy lasagna, undressed salads and house wine that takes the enamel off your teeth. To date, the only place I’ve ever been able to recommend has been Akbar’s curry house, which as good as the branch in Newcastle. Middlesbrough is the only big town I know where going to a Pizza Express is considered a night out.

I don’t feel remotely sorry for foodies in Teesside, though. They have Hurworth and Yarm, where Marcus Bennett’s Bay Horse and Muse continue to garner plaudits (I’ll be reviewing his new trattoria Cena shortly), and Norton village, in Stockton, which has 12 Harland Place and the excellent Café Lilli. They have formal country house hotels in Rockliffe and Wynyard Halls and they also have the two best restaurants in the entire North East on their doorstep: The Raby Hunt in Summerhouse and The Black Swan at Oldstead.

Teesside is a great area for good food.  But if you’ve ever been stuck in Middlesbrough town itself and fancied a decent dinner, forget it. Until now.

“An experience normally reserved for capital cities,” the blurb for Hudson Quay goes on. Well, that’s pushing it, though it was right about it being a destination restaurant: it’s in the middle of nowhere. 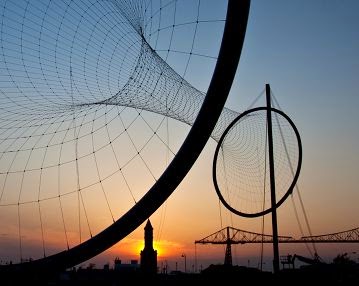 “It looks like one of Granny Diner’s surgical stockings,” I murmured as we first saw the artwork, “or maybe a giant lobster net”.

It is supposed to be the first of five installations in the Teesside Valley, and cost £2.7million.

“It’s beautiful, with a fragile materiality,” said Mrs Diner, who had obviously been reading the guidebook. Our friend, who’s an artist, agreed. The restaurant looks out across the dock towards the sculpture, which is dwarfed by crane and stadium.

“Should have made it bigger,” I grumbled, though I did grudgingly admit that its lightness, stretched taut like a suspension bridge, was quite elegant.

As was the “Grand European Café” itself. It was a pleasant surprise to walk into a modern, tastefully styled room. It has a comfortable lounge and bar, and the restaurant area is dominated by a vast window with its view of water, cranes, stadium and surgical stocking. Sorry, major artwork.

The menu was a curious mixture for early Summer (we visited last month). Dressed crab sat alongside 16-hour braised beef cheek, lamb rump, calves liver, lemon sole and pork ragù pappardelle. There was also a grill menu. The fish came with Iberico ham, English asparagus and micro mushrooms, which sounded a bit of a mis-mélange to me, so I chose the beef cheek, while our friend had the crab, and Mrs Diner ordered a sirloin steak. 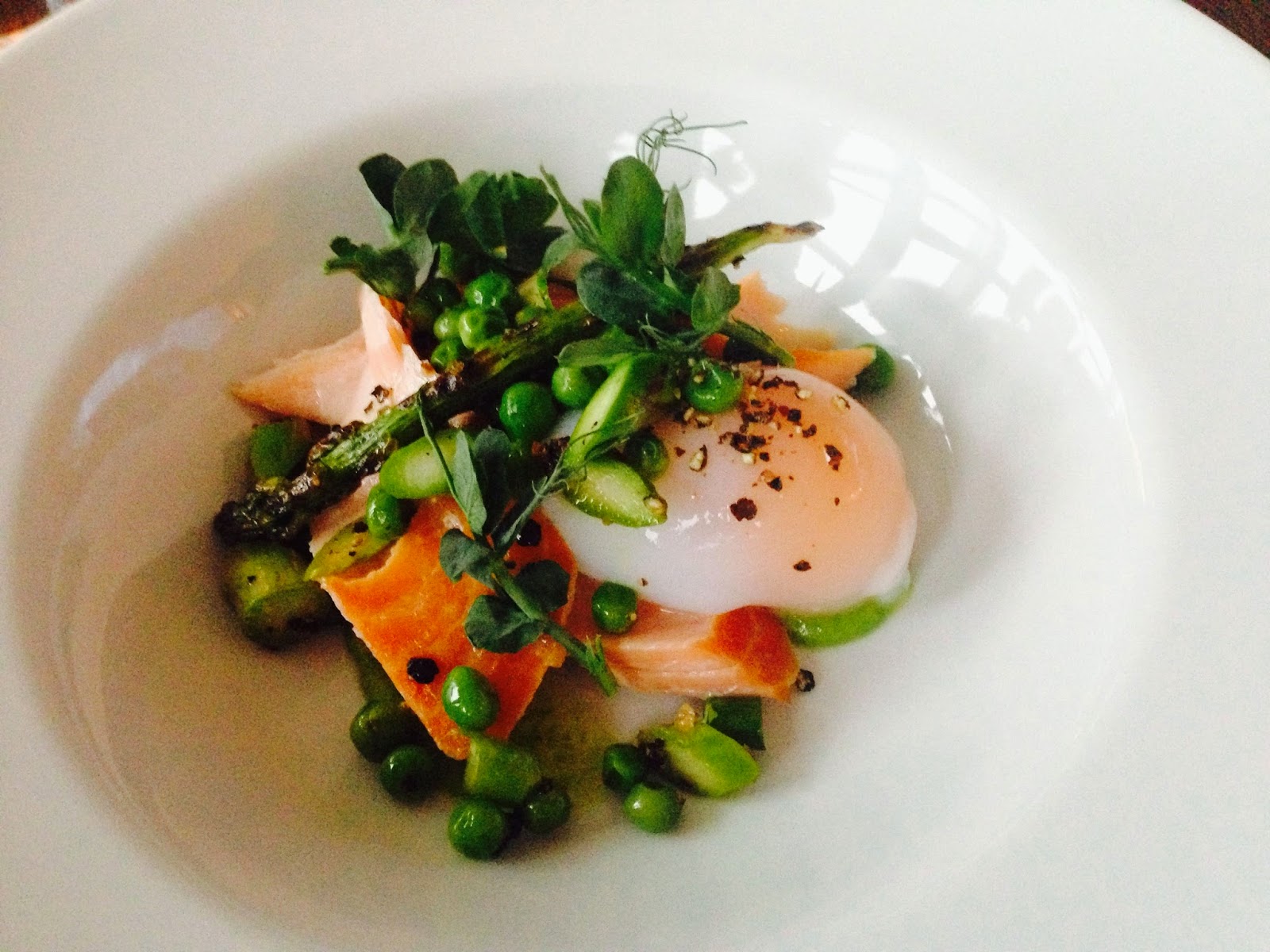 We started with smoked salmon and slow cooked duck egg, freshwater prawn salad and “early summer vegetable risotto”. The egg was perfect and the salmon nicely oaked and of good quality. 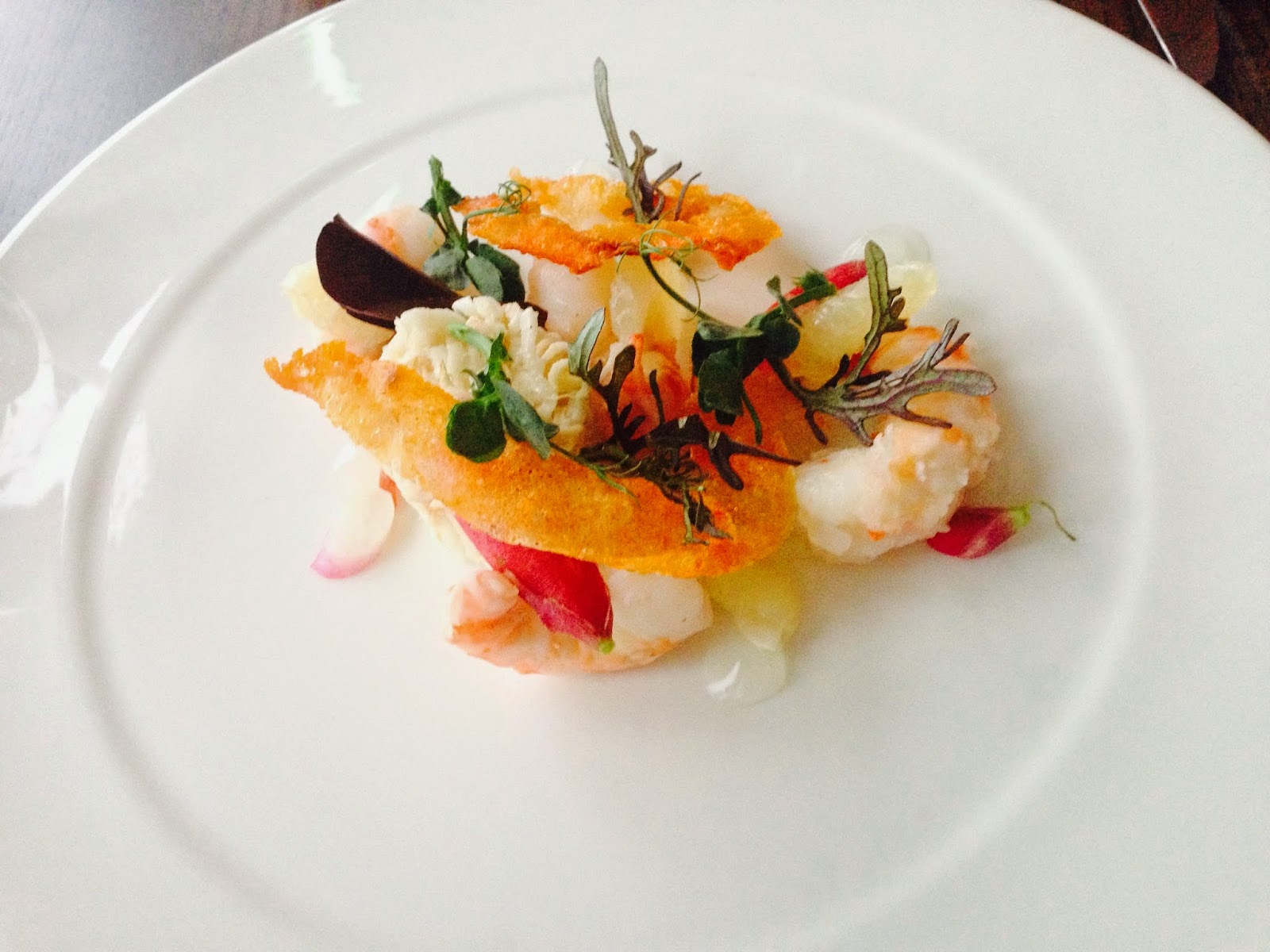 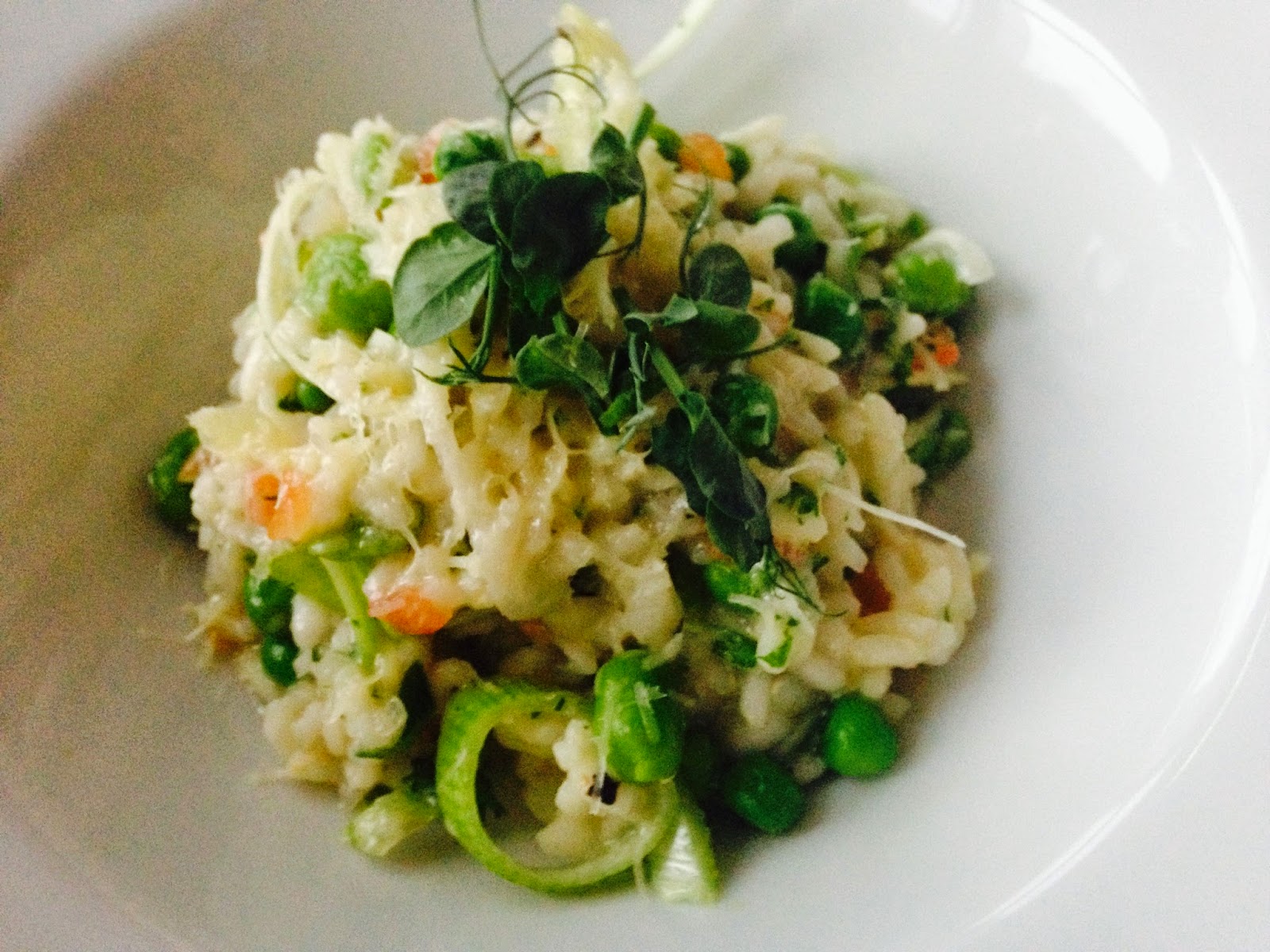 The prawn salad was light and fresh, but the risotto was very disappointing. The rice managed to be both creamy and crunchy at the same time – like eating grit with a cheese sauce, and the vegetables, peas, beans and thickly sliced leek, were so early they were virtually raw. I hoped my “16 hour braised cheek” would be more tender. 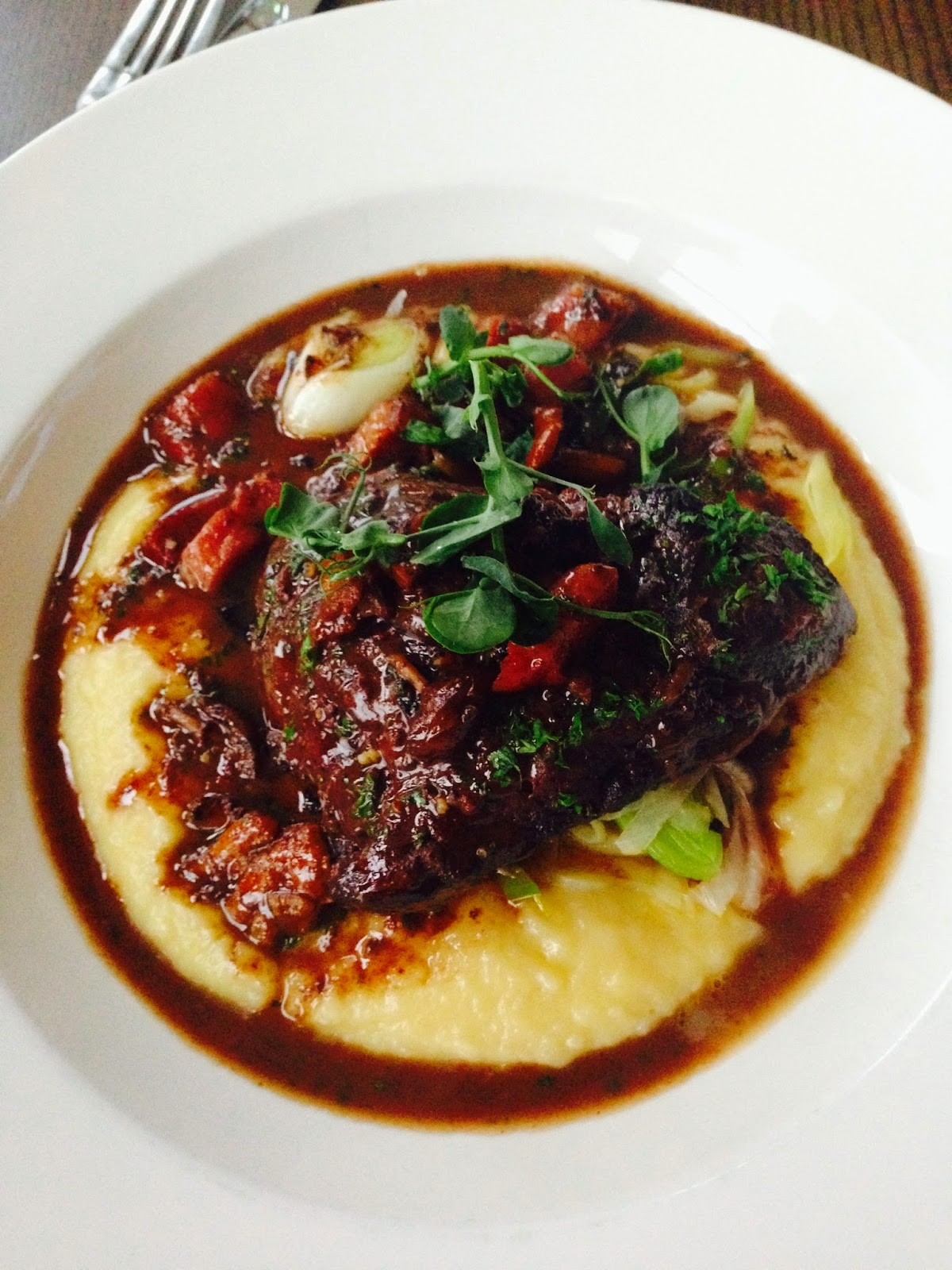 It was an enormous slab of cow head, sitting on a mound of smoky mashed potato with a moat of sauce with mushrooms and pancetta. But as soon as the eyes had adjusted to its size, my nose alerted me to the smell. It was very strange indeed.

Now if there’s one thing this job demands, it’s a sense of smell. This one I couldn’t place – kind of winey and vinegary at the same time: was it some oriental spice combination? Or had the meat been left too long in a plastic bag?

Telling myself I needed to get out more, I dived in, but the taste matched the smell. I asked the waitress: what had this beef been living in for the last 16 hours? Red wine, she said proudly. Two mouthfuls convinced me: either the wine or the beef was off colour, and I really feared I would soon be too. If it wasn’t high, it was unpleasant – maybe the wine had come from Gdansk. 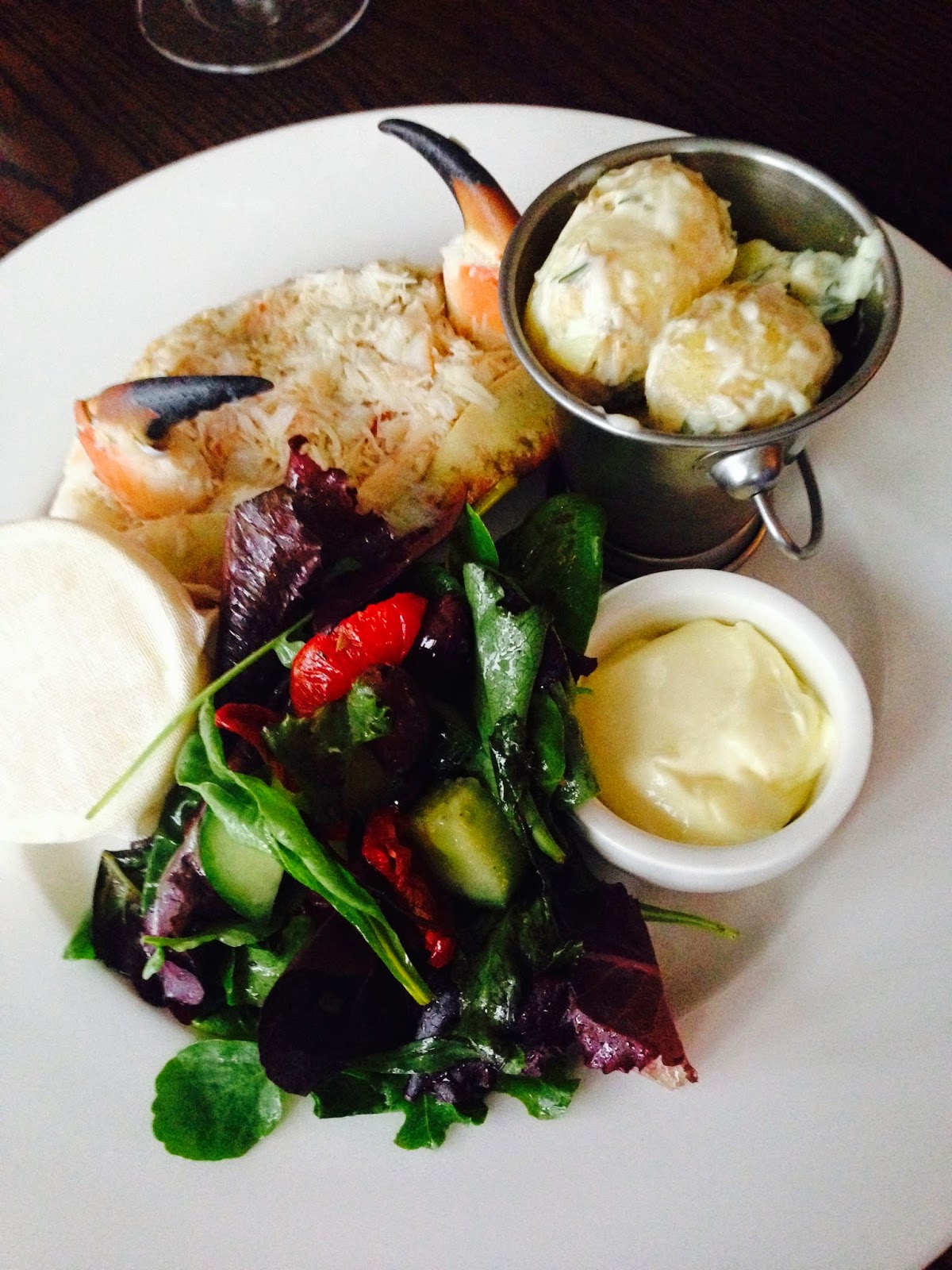 So I sent it back and instead sampled my companions’ food. The crab wasn’t really a main course at all – a simple crustacean, dressed for lunch really, with a few new potatoes tossed in mayonnaise, some aioli and a side salad. Mrs Diner’s steak was tough and rather overcooked. Oh dear.

The service was enthusiastic but amateurish.

I’ve given the place three stars on balance because it does have some ambition, it was generally well presented, and some of the meal gave an indication of future competence, but the cooking isn’t there yet, or at least it wasn’t the night of my secret visit.

Still, it’s the only non-Asian restaurant I can recommend in Middlesbrough – so far.