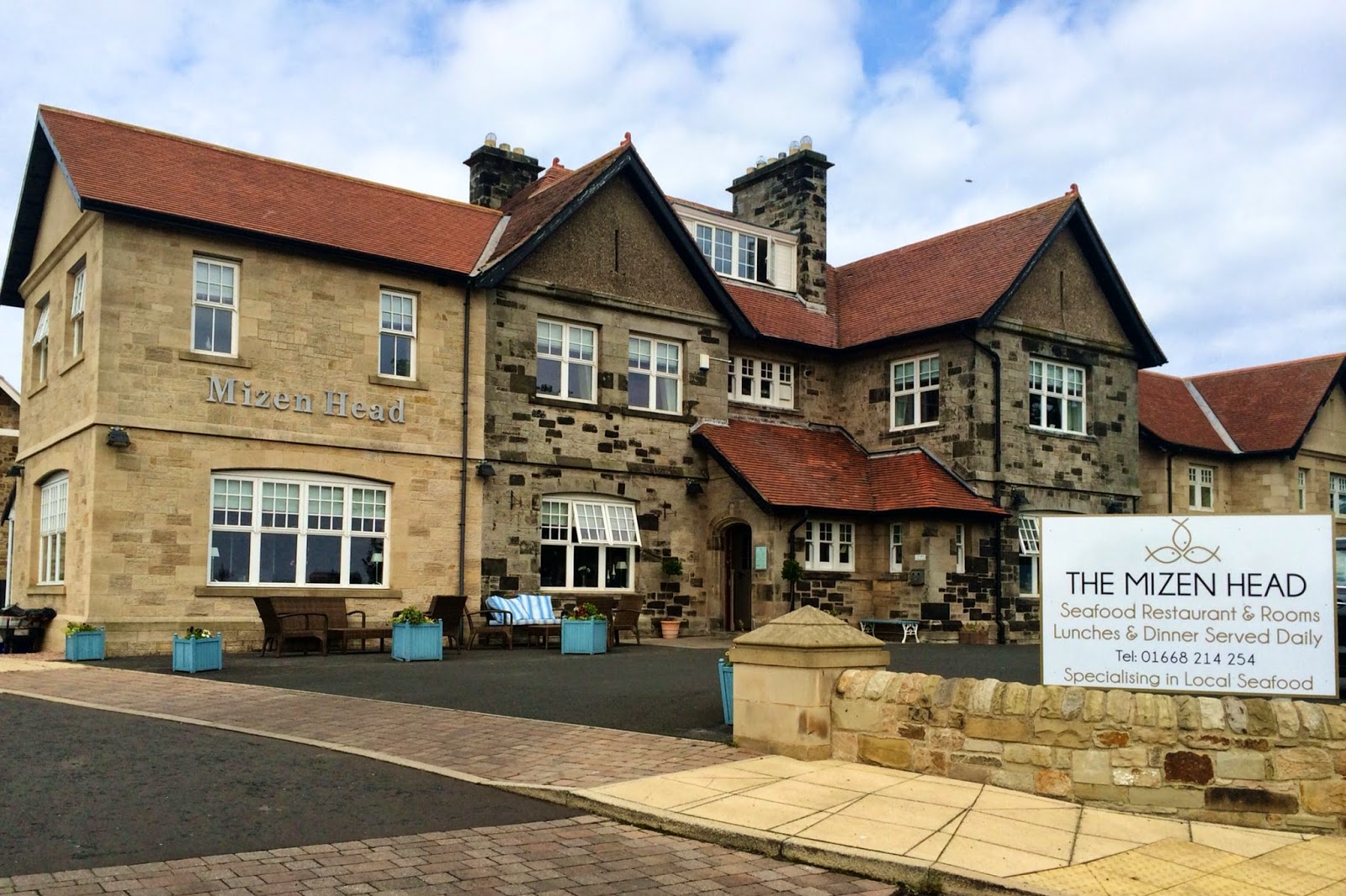 
[Note: the owner of The Mizen Head, Alex Watson, tragically died at the end of November 2016, at the age of 30.  This review was written more than two years earlier.]

I must congratulate owner Alex Watson. The pure white sand of Bamburgh has always been a desert for foodies. His restaurant with rooms now offers a decent meal after a long walk on Britain’s best beach.

I love Bamburgh, and the lack of good food has always been an embarrassment when I recommend the area to visitors. Now it can have a Secret Diner Recommended sticker on its door. 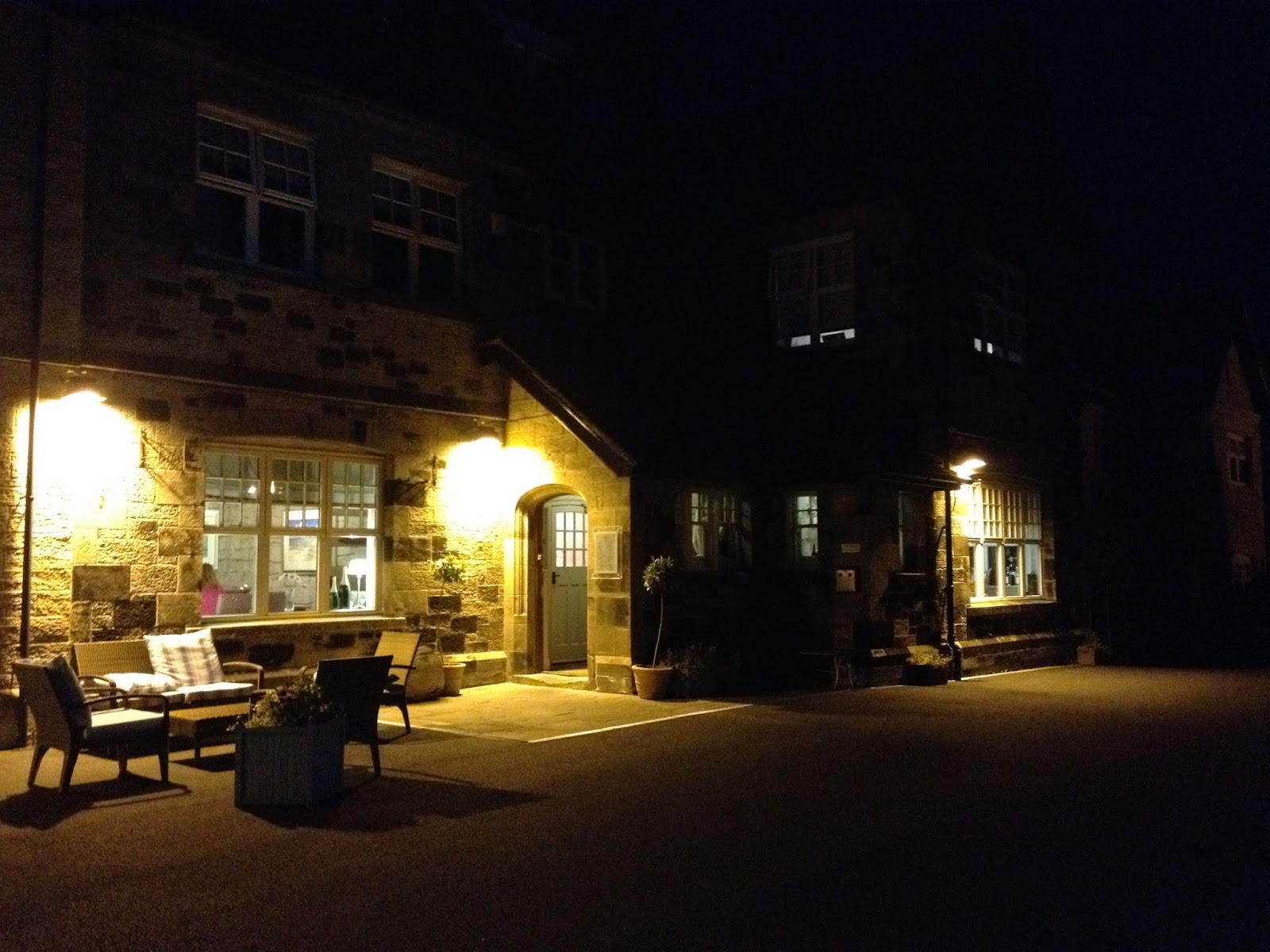 The Mizen Head is a solid, extended, refurbished villa with a big car park and attractive lighting – yes, already the nights are drawing in so we could appreciate the illuminations as we left. 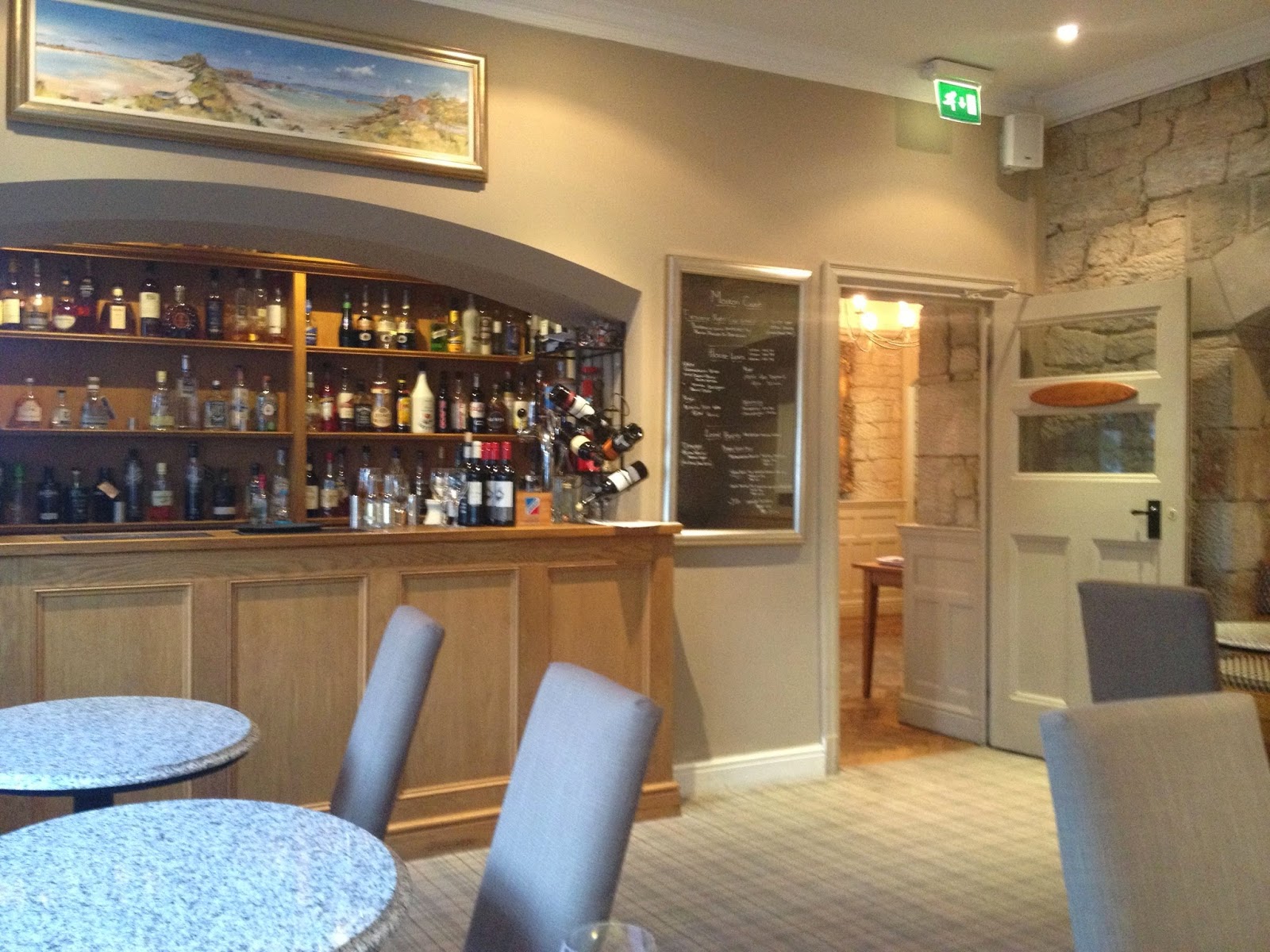 Mr Watson has clearly invested a lot in this place. Unlike a lot of seaside restaurants, it’s plush and modern, elegant and smooth. It has a smart bar with banquette seating and granite topped tables. Indeed, it oozes charm: you wouldn’t call it opulent, but it’s fresh and has paintings by local artists and tartan carpets with comfy chairs. The bedrooms look pretty comfortable too.

The service is organised, friendly, confident and generally knowledgeable, apart from a glitch in the wine list. This is pretty extensive, mostly populated with product from the New World, and in particular South Africa, with a big range from the winery owned by South African golfer Ernie Els. Els’s reds are particularly well respected.

But the Mizen Head seems wedded to the motto printed on its menu: “un verre en appel un autre" – one glass calls for another – for they seem to discourage wines by the single glass. There was no sign of any on the list, and great confusion from the staff when we asked for one. Eventually we secured a South African chenin blanc, which seemed appropriate enough for a place that specialises in fish, though it also offers steaks and veal.

The cutlery looked like a surgeon’s scalpel set. The manufacturers call it Avantgarde, but I find this particular range rather unbalanced and uncomfortable. Clearly the catering accessory salesmen have found a willing victim in Mr Watson – all sorts of trendy plates and accoutrements appeared during the meal. Yet the menu itself was solid, traditional, and long. 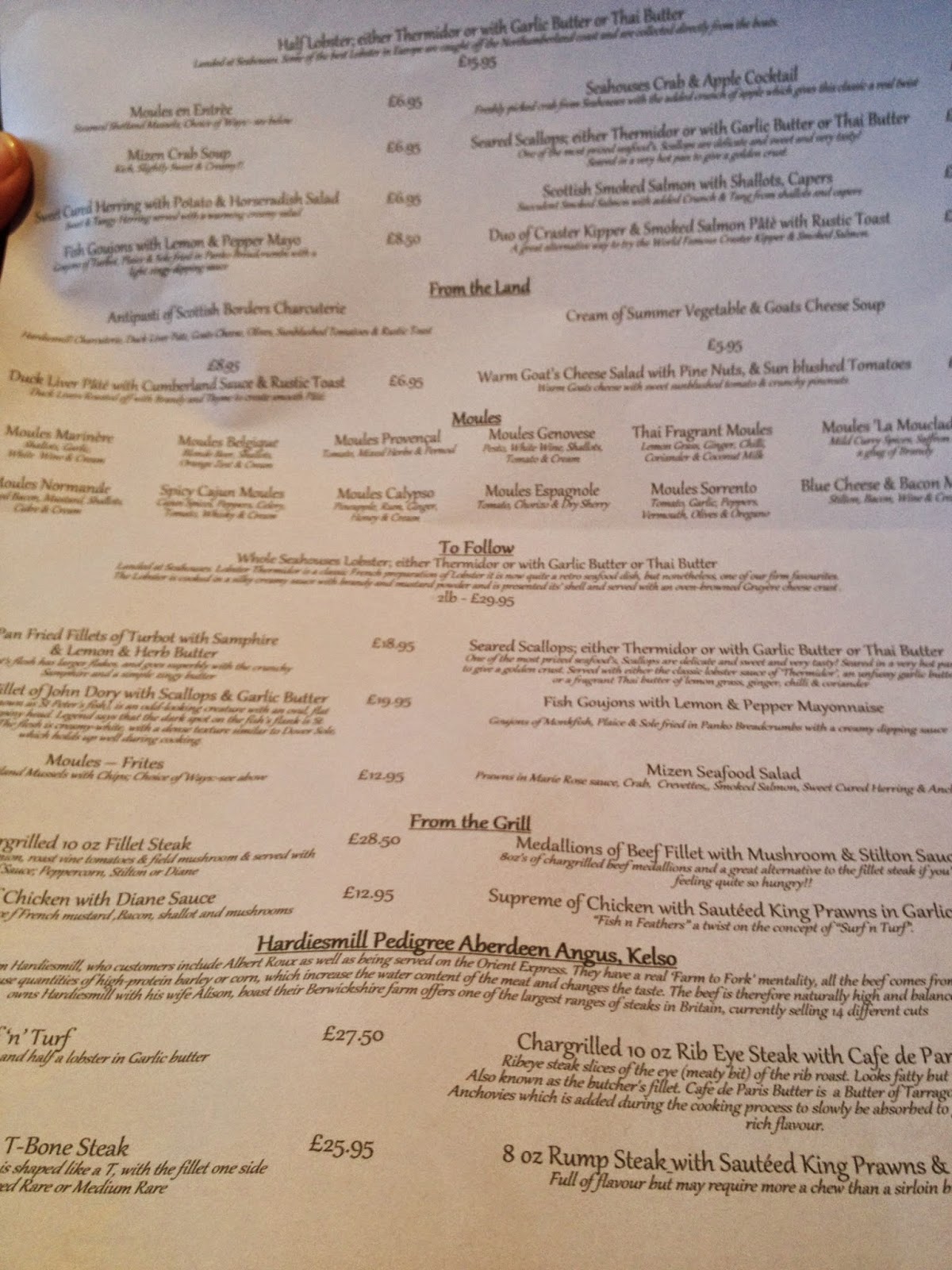 There was a choice of 26 different starters, of which 12 were variations on the theme of mussel. Now anyone who has followed these reviews over the last couple of years will know that I don’t really approve of long menus. Not just because it makes choosing such an arduous task, but because I have yet to find a kitchen that can excel when it has to prep itself for such a large inventory. Simple, short and perfect is my motto. And very good wines by the glass, so you can match your courses.

When it came to the choice of mussels, I had to literally close my eyes and stick the scalpel knife into the list. It came up with Moules Espanoles, with chorizo and dry sherry. It narrowly missed Thai (lemongrass, coconut milk), Sorrento (vermouth and olives) and Genovese (pesto and white wine), and I’m very relieved it didn’t land on Calypso, which had pineapple, rum, ginger, honey and cream – that’s no way to treat a good mussel. 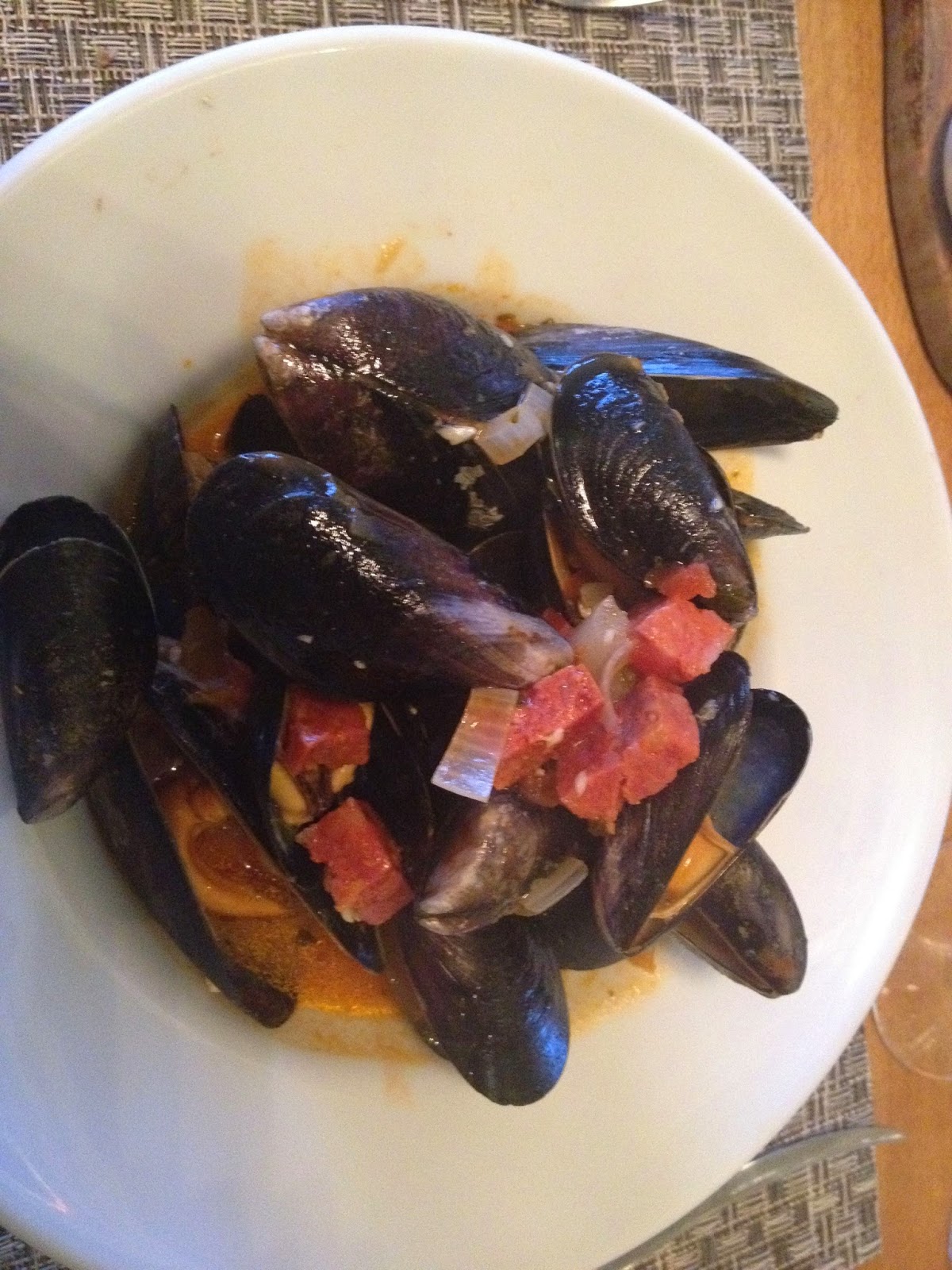 Very good they were too – big, plump juicy fresh specimens. But the chorizo let them down – they could have crisply fried up thin slices, or used good cooking chorizo and let it melt into the mussel juices, but instead I had to pick through cubes of steamed sausage and, though it flavoured the jus in a smoky way, they were just kind of grey – not literally, but they tasted grey. Not a success. 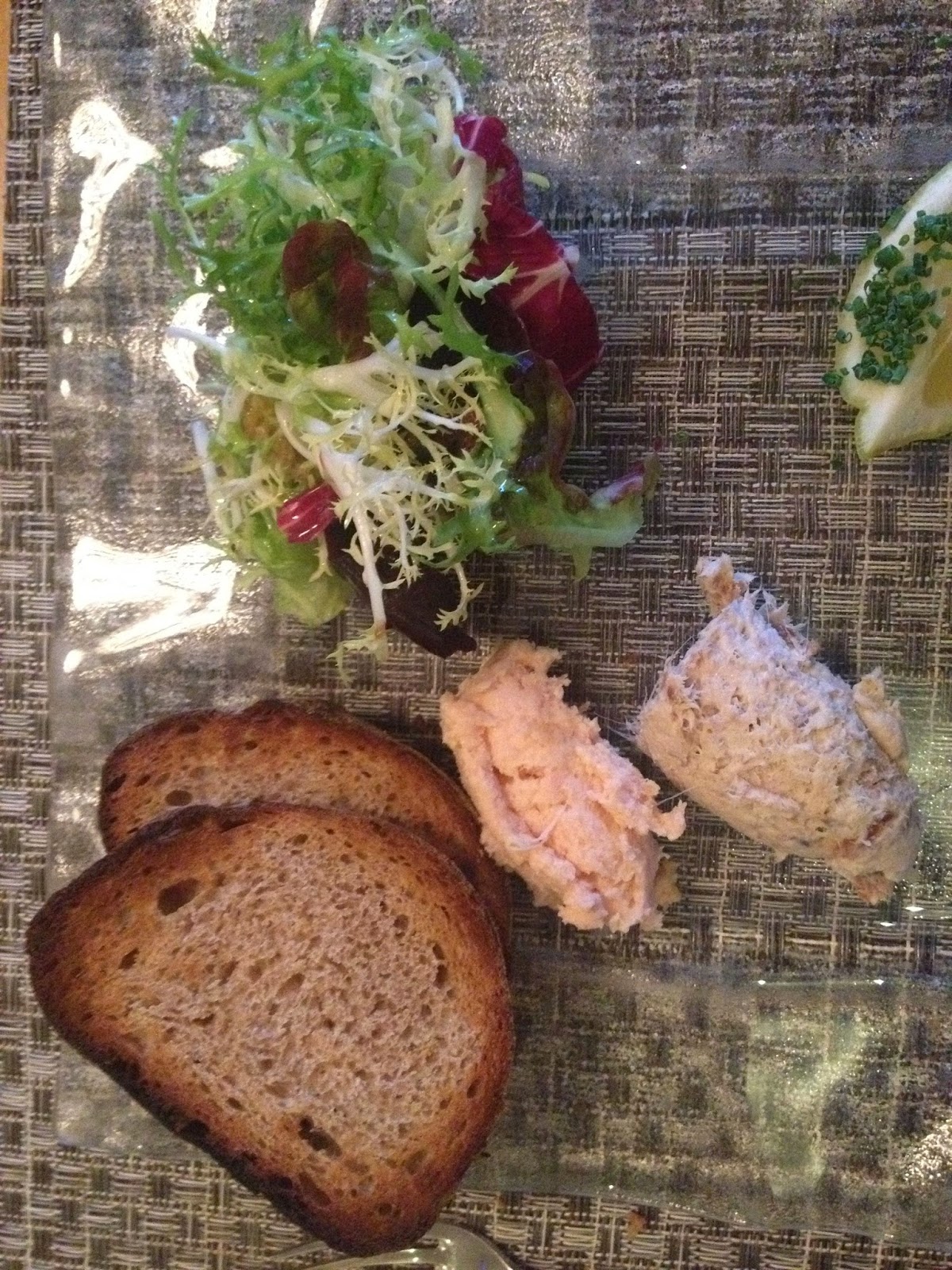 Mrs Diner had chosen her starter more carefully: a “duo” of kipper and smoked salmon pâté. Very good indeed, a tribute to Robsons of nearby Craster. The bread was delicious: homemade granary with a dark, woody crust. I had more than one too many slices. 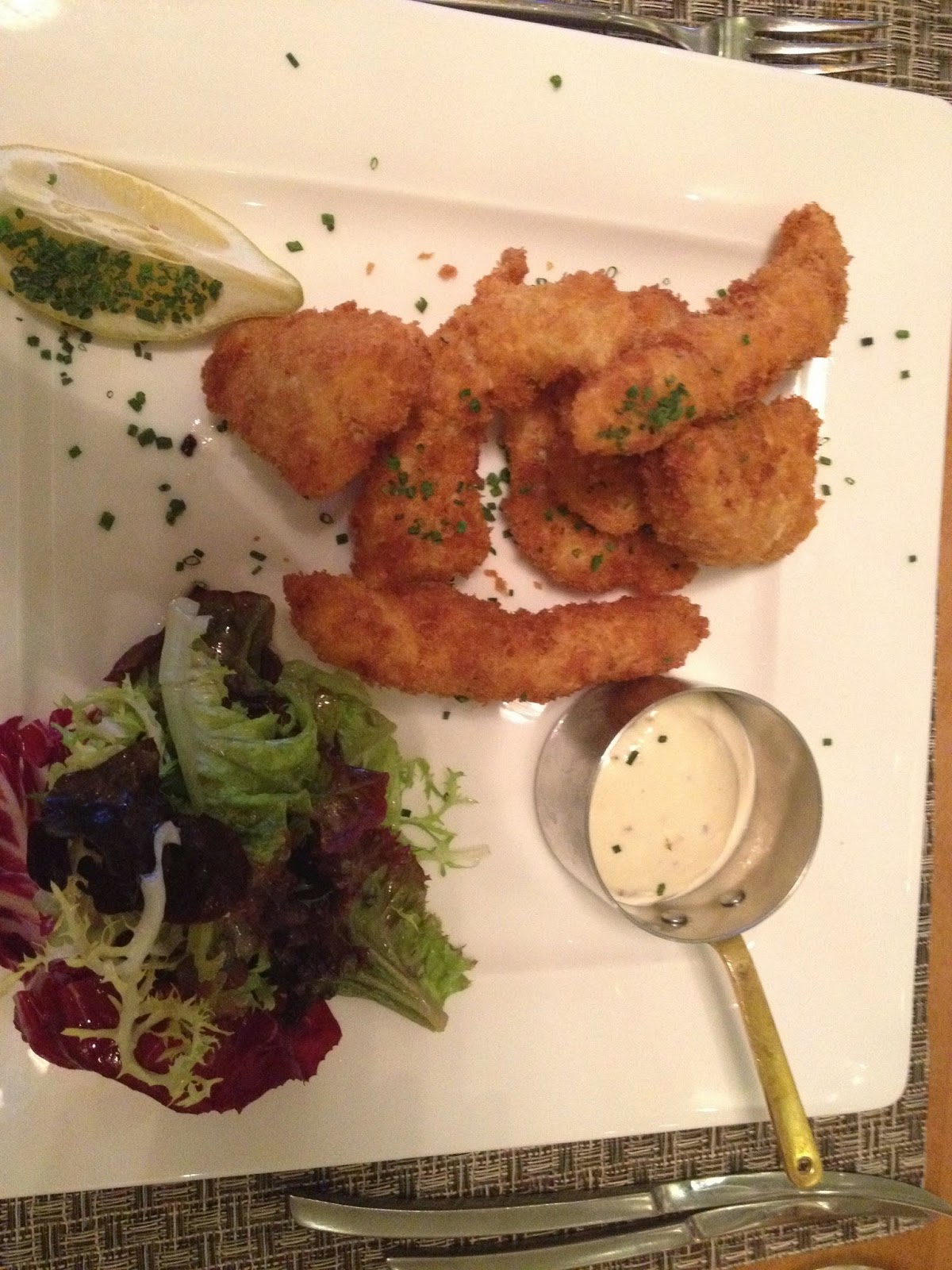 For her main course, Mrs Diner had panko coated fish goujons, which were very well cooked and delicious, but the lemon mayonnaise was poor and gloopy. Mrs Diner couldn’t detect the promised monkfish amongst her goujons, but I told her she should be grateful – monkfish isn’t my favourite seafood. However, turbot is. 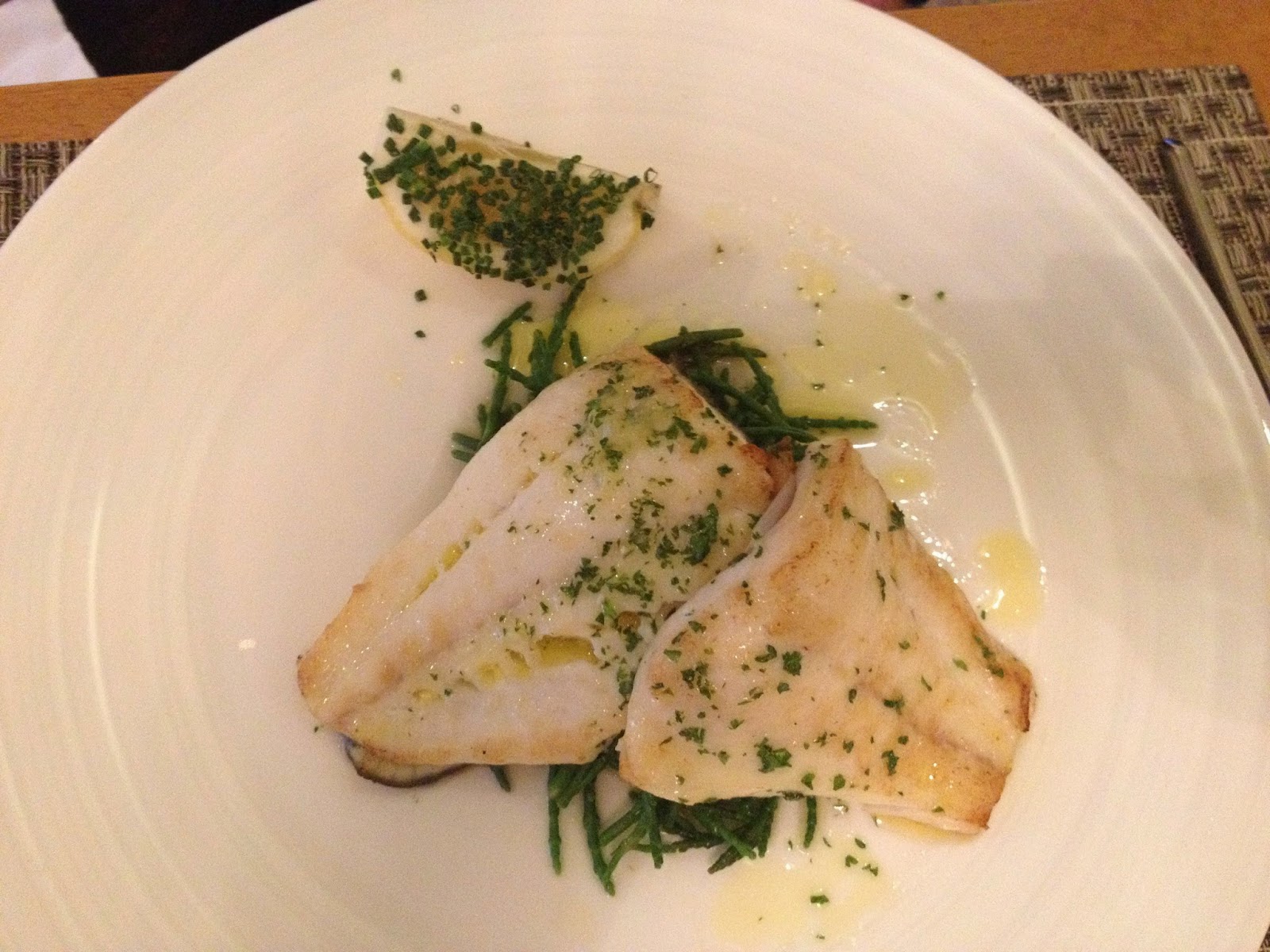 The king of fish, turbot is unbeatable, and very hard to get wrong. Two fillets were brought on buttery samphire, with a lemon and herb butter sauce. Sadly, and inexplicably, it was overcooked. Conversely, the chips that came alongside were undercooked in the middle and soggy on the outside. 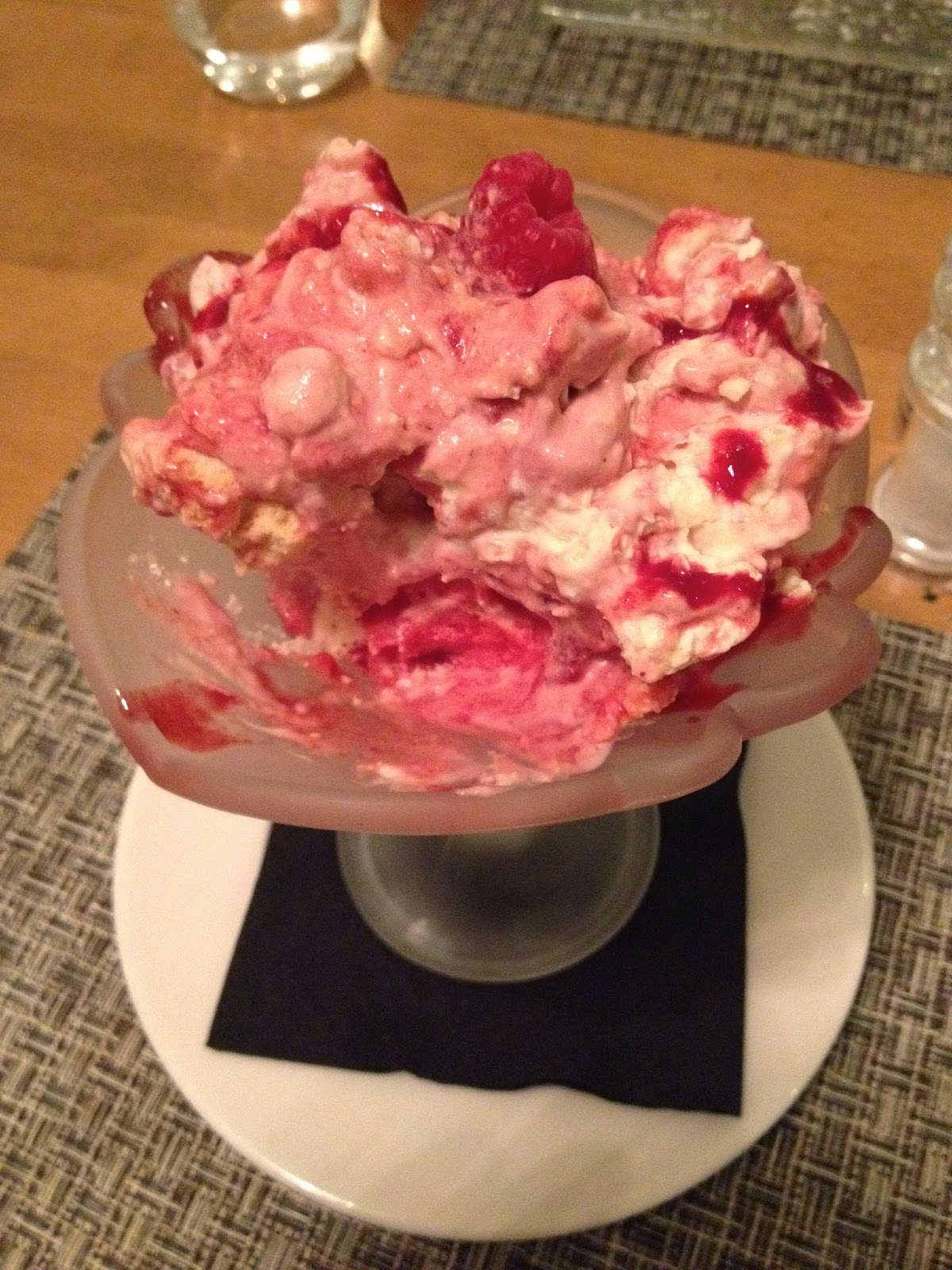 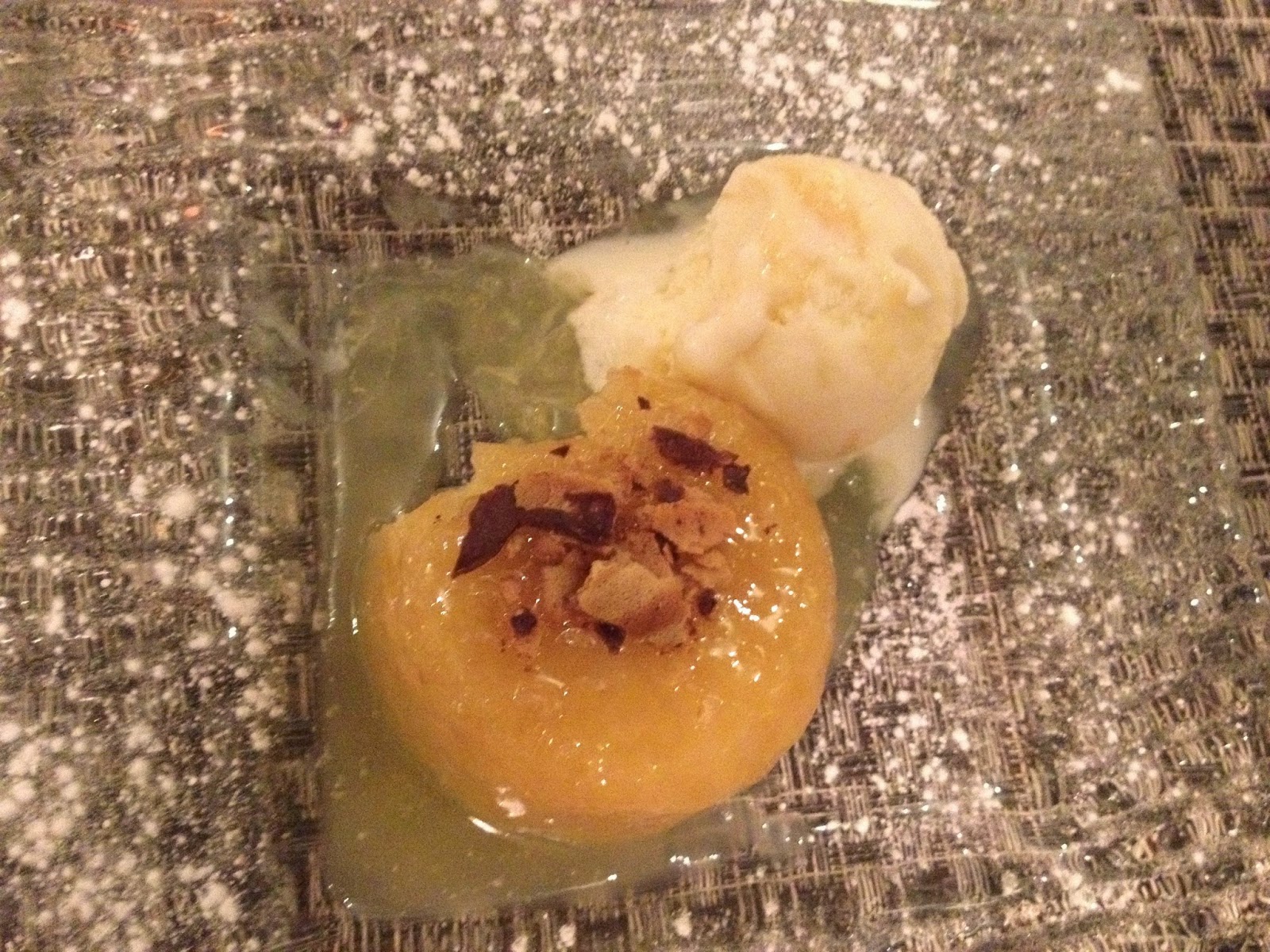 The puddings were so good, we took bites before photographs, a fatal error you can see here. There was a terrific mess, with great raspberry sorbet that proved how much nicer Bamburgh is than Eton, and a deliciously tart lemon sponge. The meal wasn’t cheap - £85 for two including four glasses of house wine (OK, maybe it would have been better to have bought a bottle).

With a smaller menu, this place would be excellent. For now, it’s just good, and definitely recommended – as is the beach.