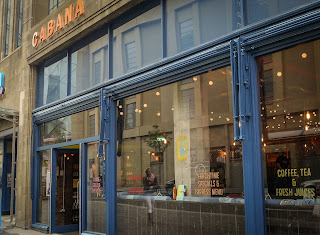 
As I tap out these words, we find ourselves bang slap in the middle of a hefty old summer of sports. The English football team outdid themselves, managing to fall well short of even our most modest expectations; Andy Murray kept us on the edge of our seats (you can tell I’m writing this before he either fails or triumphs this Sunday); and, as if that wasn’t exciting enough, the Olympic Games are just a month away.

Mrs Diner and I decided to try and get ourselves in the Olympic spirit by having dinner in Rio. Well, actually the Secret Diner’s budget is a bit stretched this month, so we made do with a new “Brasilian Barbecue” restaurant called Cabana, in the former Co-op building on Newcastle’s Newgate Street. It’s a chain – they’ve opened ten of these places across the UK. Based on this experience, I have no idea why.


The blurb on their website proclaims that Cabana have been “searching the streets, beaches and markets” for dishes to represent the “Best of Brasil”. But has that search resulted in a gold medal triumph or is it a baton-dropping disaster? 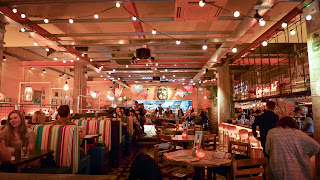 It might be a sign of my advancing years and generally unsunny disposition, but the whole “party” vibe that they’re looking to create here just didn’t sit right with me. Everything from the menus to the decor, including banquette seating made of stitched-together pairs of jeans, is a haphazard blast of colour designed to scream “Fun, Fun, Fun!” 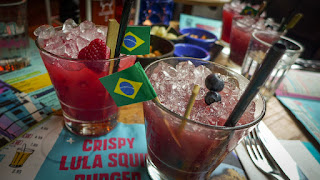 The menu has cartoon pictures of chickens and cows, which is a handy reminder that the creature you’re about to see impaled on a skewer used to have a pulse. The music is a non-stop blast of carnival-evoking tropicalia which I found almost exhausting. We wondered how on earth the staff coped with all the enforced jollity? 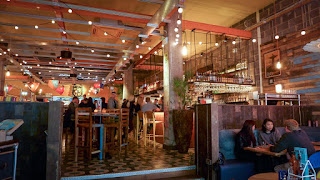 In a vain attempt to get in the mood, we tried a couple of differently flavoured caiprinhas and found them to be solidly made, with the booze level just about right. In fact we tried a couple more than we meant to; they bished up our drinks order, but gave us the unrequested drinks they’d made for free. Hurrah for mistakes. 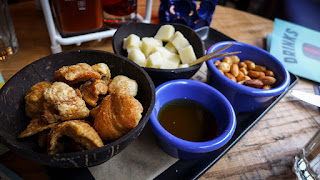 To go with these we had, mostly out of curiosity, ordered their “Boteco sharing board”, which brought together an eccentric collection of bedfellows. I had no idea that cubes of cheap-tasting parmesan which you are supposed to dip in honey was an Amazonian specialty, but apparently so. Pork scratchings of an equivalent standard to those produced under the “Mr Porky” brand and some spicy nuts completed the deal. Except that eight quid for this lot is no deal at all. 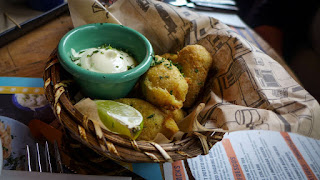 Starters provided the best eating of the evening. The salt cod in Mrs Diner’s fritters may have barely tiptoed through them - I’d not have been able to tell you it was there if the menu hadn’t told me - but they were crisp and greaseless. 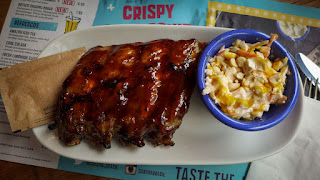 The pork meat between my guava-cue ribs peeled away satisfying from the bone and had good flavour, even if the marinade was a bit one-note. A sort-of slaw which counted corn and nuts among its constituents was really quite good. 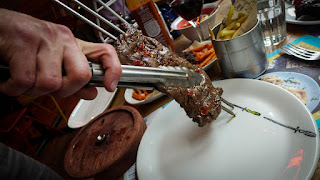 From there things got significantly less Olympian. The schtick here is that your food arrives tableside on a stick, or, to be more precise, the skewer it was cooked on. I’m unclear what this adds to the experience, other than being a bit of a pain in the bum for the waiters whose job it is then to decant the stuff from stick to plate. Once this delicate operation had been negotiated the results were underwhelming. 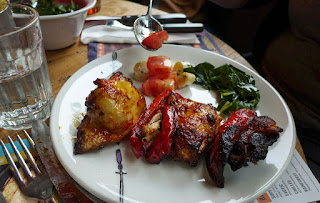 Mrs Diner’s chicken was dry and bland, despite the time it had spent languishing in a malagueta marinade, while my flank steak - a cheap cut that does well over hot coals - lacked any real beefiness, the marinade of chilli and cumin overpowering the cow. 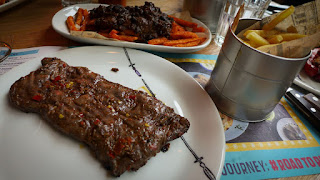 A trip to the loos (like an explosion in a colour factory, natch) took me past the pass and provided some clues as to the lack of oomph. The meats were apparently being grilled over gas flames rather than the charcoal they use in even quite middle-brow competition like Turtle Bay and Viva Brasil. The resulting difference in flavour is stark. 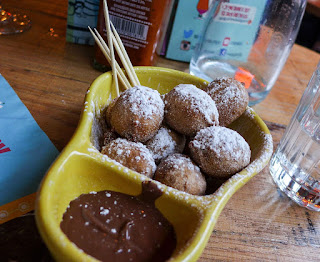 Puddings were nowt spesh either. Some Nutella filled doughnuts had an unappealing stodgy texture and a portion of frozen yoghurt was so insanely cold that it brought on an instant bout of brainfreeze while tasting almost entirely of nothing. 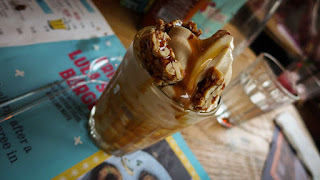 So: a not terribly inspiring meal at a new “multi”. Nothing much to see here, right? Well, no, because here’s the bit where we talk about economics. Even allowing for 2-4-1 cocktails, and with only one further glass of wine ordered from a very short list, this meal came in at just under £90 for the pair of us. Without a tip.

When chain places know what they’re doing and provide consistency and decent value then I’ve got no issue with them. However, for this standard of cooking, these prices come nowhere close to decent value. They’re using cheap ingredients and then failing to get the best from them. The words rip and off spring to mind.

On a brighter note, they are employing some really hardworking and enthusiastic staff; service was attentive and really friendly. See: I’m not a total grouch.

Frankly, there are so many places I’ve reviewed recently that offer better value, from Bistro 46 in Jesmond to The Garden House Inn in Durham. I suggest that if you want to eat like an Olympic champion in the coming weeks, then avoid this cabana and choose somewhere more Team GB.