The Black Bull Inn at Frosterley 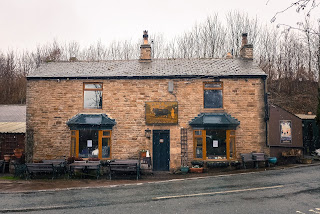 
Whilst so many new restaurants give themselves a swift veneer of fake venerability by adding the odd shelf of leather bound books or a few antique fixings, it’s nice to find a genuine old English pub. As you push against the heavy wooden front door of The Black Bull at Frosterley to reveal a cosy ancient inn, you would think you'd found tavern heaven. Look carefully, though, and you’ll realise that this isn’t an accident, but an act of careful, loving design by its owners The Davis family.

Having bought the place in 2005, they sought to restore it to what it might have looked like a couple of hundred years ago. In similar fashion to the McCoys' achievement at The Crathorne Arms, this included filling the place with all manner of personal effects including clocks, portraits, antique furniture as well as Duncan Davis’s own rather more contemporary photography. 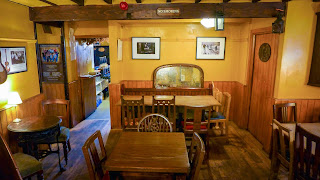 With flagged and wooden floors, small rooms, open fires, exposed beams and - praise be! - no music or television to distract from the gently thrum of background chatter, it is a delightful place to end up, especially after a longish drive through the impressive if moody Weardale scenery. Frosterly’s claim to fame used to be its limestone – you can find Frosterley Marble on the floor and pillars of Durham cathedral. Now it’s known for the Black Bull.


We settled in next to a fireplace in the back snug on a curved oak settle that dates from the 1700’s and decided how to deal with a hunger that was very much the work of 2018. 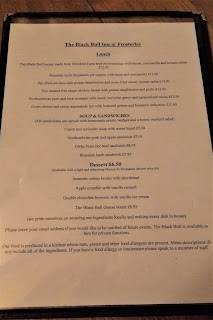 It was lunchtime, so there was a relatively limited menu of main courses, soup or sandwiches. 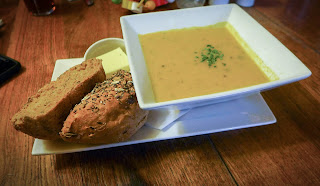 We shared a vast trough of carrot and coriander soup, which came with two hunks of excellent bread from a nearby bakery. The soup itself was unusually good, having a clarity and depth of flavour that suggested it may have started life as a properly made vegetable stock. It could have done with a bit more coriander, but did possess a moreish lactic tang, presumably derived from a healthy dose of crème frâiche or soured cream.

Mrs Diner and I both flirted with the idea of shepherds pie - although topping it with mozzarella sounded like heresy - before settling on a burger for me and sausages for her. The burger didn’t look altogether promising, there being - as tends to be the way with pub burgers - rather a lot of potentially distracting gubbins in there besides the essential fit-out of beef, cheese and bread. 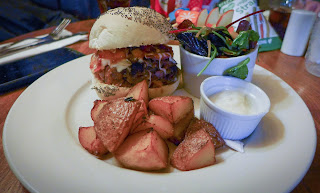 All was well, however, largely thanks to a tremendously tasty and juicy patty of rib trimmings that just about held together and no more, cooked pink as requested. Personally I’d ditch the mozzarella - there it is again! - for some melty American or Swiss cheese, but a salty slice of bacon and some tangy tomato relish turned out to be welcome participants. This is about as good an old-school British pub-style burger as I recall. A side salad was properly washed and dressed. Spuds came in a hybrid format, somewhere between chips and rugged sauté potatoes. 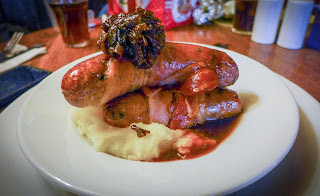 Mrs Diner’s pork and leek sausages turned out to be giant versions of pigs in blankets, being wrapped in slices of bacon. This, along with a generously seasoned gravy, resulted in a pretty salty dish, even for our Maldon-scarified palates. The sausages were excellent specimens, plump and moist. I asked our friendly waitress where they were sourced from. She advised that she had no idea at all, and furthermore gave no impression that she had any care to find out either. That’ll teach me to ask questions. They came with a mound of decent mash and were crowned with a blob of caramelised onion.

The small range of draught beers were provided by Allendale and Wylam Breweries and, judging from my pint, the former’s deep red ale Wolf, properly kept.

A varied crowd of walkers and locals, diners and drinkers had spread itself amongst the pub’s three rooms as I wandered to the bar and back. Truly this is that classy local boozer that has you firing up the Zoopla app to see what local house prices are like. 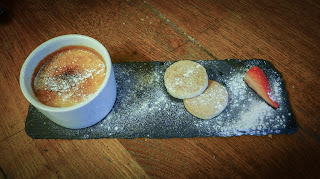 Puddings were enjoyable rather than revelatory. The advertised Amaretto flavour had gone AWOL from a crème brûlée, which was otherwise well made, with just about the right amount of bitter-burnt topping to smooth custardy filling. 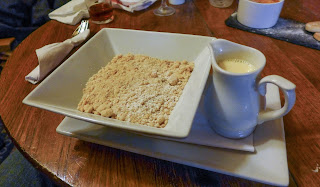 My apple crumble reminded me very much of the one the Aged Diner used to make, which isn’t to say it was the best I’ve ever had, if you get my drift, but I appreciated the jolt of nostalgia. The accompanying jug of custard, being proper anglaise rather than Birds’, was a welcome upgrade on my childhood memories. Sorry, Mum. 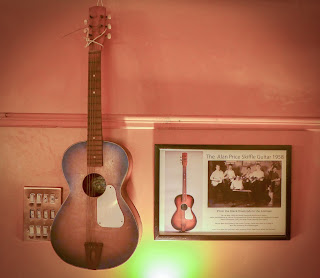 This was an enjoyable meal, served in what is quite frankly a fabulous, and fabulously interesting pub. They have a regular programme of live music and their own peal of bells; there’s all sorts going on and I do recommend you make a trip in the direction of Frosterley.

So why only 3 stars for food? Well, that lunch menu is pretty basic. Which is fine: after a long walk I’m sure a bowl of soup is exactly what their customers are after. But I can only review what I can order.

I did ask if they could offer any starters from the evening menu to get a sense of its more adventurous offerings, but no deal. Wood pigeon with apple and sultana black pudding sounds appealing. If we do go back in the evening, and it’s great, I’ll adjust the rating accordingly. In the meantime its new Recommended sticker will reflect a rather adorable pub that serves tasty, filling plates of good home cooking. And there’s certainly nothing wrong with that.